Fertility problems are one reason why symptoms of PCOS are treated; however, it is a complex disorder in which 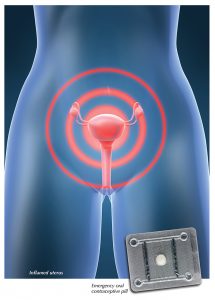 the hormonal imbalance causes irregular or absent periods, excess body hair, acne and weight gain. Small fluid filled cysts may be present on the ovaries but not in all cases. Long-term sufferers of PCOS are at greater risk of heart disease, stroke, diabetes and cancer of the uterine lining.

There is no specific cause of PCOS. One conventional treatment routinely offered is the contraceptive pill, which artificially enforces regular periods but fails to deal with the underlying causes. Some experts have queried whether the pill itself can trigger the condition and a recent Finnish study found that insulin sensitivity is reduced in women taking the contraceptive pill1, a key feature of PCOS.

The condition responds well to herbal and dietary intervention; in one review of thirty three studies involving 762 women prescribed herbal medicines for PCOS, evidence was found for the regulation of ovulation, improved hormone profile and improved fertility outcomes2. With time and commitment the underlying physiology can be changed so that symptoms subside, fertility increases and the risk of serious disease is minimised.

THE KEY FACTORS OF PCOS

Insulin is a hormone produced to regulate blood sugar levels. When lots of refined carbohydrates such as white bread, white rice and sugars are eaten, blood sugar levels rise rapidly. This causes a surge in insulin, which clears the excess sugar, but then levels can drop too low. Complex carbohydrates such as brown rice, beans and root vegetables are broken down more slowly thus avoiding the insulin surge.

When large quantities of insulin are released regularly the body becomes less sensitive to insulin and in response the pancreas produces more insulin, trying harder to get the same effect. The result: high levels of circulating insulin and insulin resistance by the body cells.

Insulin resistance which results in high levels of insulin in the blood is one of the primary features of PCOS with significant effects:

It causes the ovaries to produce higher levels of androgens (male hormones). These that give rise to many of the symptoms of PCOS.

It prevents the liver from producing a protein which keeps testosterone levels in check.

Insulin resistance prevents glucose from entering the body cells readily. These cells need glucose and send hunger signals to the brain in a desperate effort to acquire some. This results in cravings and encourages overeating.

Weight gain, particularly around the waist

Energy drops in the afternoon and after eating

Craving something sweet after a main meal

The Adrenal Glands are highly significant in PCOS. When a stressful situation arises they produce a hormone called cortisol. In a survival situation it is vital to ensure energy is readily available so cortisol raises blood sugar levels by tapping into protein stores and creating some. However, when stress becomes a repeated pattern, the ongoing high levels of cortisol and raised blood sugar add to the insulin resistance, increasing the production of testosterone by the ovaries. In addition, cortisol encourages fat to be stored around the middle and directly stimulates appetite and cravings.

Alongside stress hormones the adrenals also produce testosterone and the steroid hormone DHEA, which is necessary for the formation of female hormones. Overstimulation (and the resultant adrenal fatigue which can follow) has a big impact on the balance of these critical hormones.

High stress levels and anxieties as a child or young adult can be particularly destructive, as the hormonal system is still being established. A person can become accustomed to living with a level of adrenal overdrive which they accept as ‘normal’ and not recognise feeling stressed. Time must be devoted to nurturing on a deeper level and resolving the initial cause of the anxieties.

Some chemicals are known to act as hormone disruptors. These include PCBs, BPA and phthalates, found in plastic products such as water bottles. At low doses these have unknown effects on adults but their effect on developing embryos can be significant. Studies show that the ovaries of female embryos are exquisitely sensitive to the toxicity of these chemicals and ovarian dysfunction can result from exposure. Chemical exposures in one generation may affect the risk of ovarian disease in the following generations – even when those embryos are not directly exposed to the chemicals.

Women whose ovaries are dysfunctional due to chemical exposure have increased susceptibility to developing PCOS and need to be extra careful about their lifestyle and nutritional choices.

Ancient medical records describe symptoms similar to those experienced with PCOS. It has been suggested that genes that predispose to insulin resistance may have been ‘selected for’ – proving a reproductive advantage at times in our history when carbohydrates were scarce. Fortunately, we are not purely at the mercy of our genetic ancestry – it’s what you do with what you’ve got that counts.

With a complex mix of metabolic and hormonal disruptions Polycystic Ovary Syndrome can seem a daunting challenge. At the clinic we find that with initial support to get changes in place and a prescription of herbal medications, patients go from strength to strength, regaining physical health and a positive mental outlook that influences every aspect of their lives.

Illness can bring positive change – forcing us to take stock and change our lives for the better.