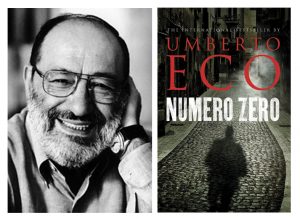 We asked our literary consultant Sarla Langdon for her thoughts after the sad news of the passing of one of the literary giants.

The death of Italian octogenarian intellectual Umberto Eco on Feb 19th 2016 is being mourned the world over. We received the news of Eco’s death literally as I was proofing my review of his last novel Numero Zero (see my review in The Written World, Lifestyle & Leisure), published in English in November last year. Eco was a world famous essayist, critic, novelist, philosopher and academic, and the recipient of innumerable international literary and academic honours. He is popularly known for his best-selling first novel The Name of the Rose which was made into a hugely successful film.

He has always been a cerebral favourite of the BAY literary column and I have faithfully reviewed every new opus, most recently the greatly acclaimed Prague Cemetery and earlier a collection of erudite essays Inventing The Enemy.

Umberto Eco like Gunter Grass leaves an enor-mous vacuum in the world of letters. The loss of his contributions to world literature will be deeply felt.

After the decease of two of my three favourite Italian literary giants, Italo Calvino (1923-1985), and now Umberto Eco, only one remains, Andrea Camilleri (of Inspector Montalbano fame) and he is of a venerable age as well.

OYSTERMOUTH RADIO AT THE HEART OF MUMBLES

Oystermouth Radio is a community radio station based in the heart of Mumbles. They broadcast 24 hours a day 7 days a week and cover events throughout Mumbles, Gower and beyond. Oystermouth Radio has a schedule of programmes on a wide range of topics and music, this includes a mixture of live and recorded shows. They are a fully licensed online community Radio Station and a not for profit organisation that started in late Jan 2011 from their Duns Lane studio in the Oral Bach art gallery. They are looking to recruit new volunteers to assist with fund raising, pro-motion, meeting with the local community, producing radio shows and taking part in community events. 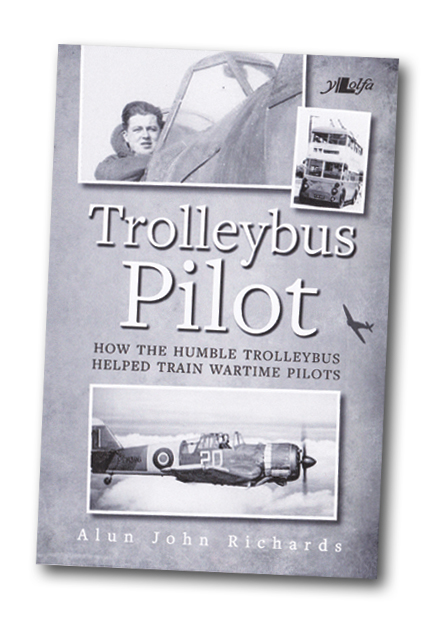 To coincide with the 75th anniversary of the Air Training Corps, a founder member, Swansea author, Alun John Richards, has written a light-hearted account of his fortunes and misfortunes in an after the ATC. His book

Trolleybus Pilot will be in the shops from mid-March.

Ugly Lovely is the title of a charming little book by Ken Blakemore and Bill Bytheway. It’s a compilation of pencil

sketches and ‘word sketches’ which perfectly document the special places and characters of Swansea.

This is a book that captures the humour that is unique to Swansea, on subjects such as Joe’s Ice-cream, Oystermouth Castle, Morriston  Hospital Casualty Department and the Kardomah Cafe. It should come with a warning, that you will laugh out loud at some of the observations.

This is an essential addition to everyone’s local book section on their bookshelf, and would make the perfect gift for a Swansea exile.

Ugly Lovely is published by Oystermouth Books at £9.50 and is available from Cover to Cover in Newton Road, Mumbles and The Uplands Bookshop.

SWANSEA – MEMORIES ARE MADE OF THIS! MOUNTAIN MARCHERS 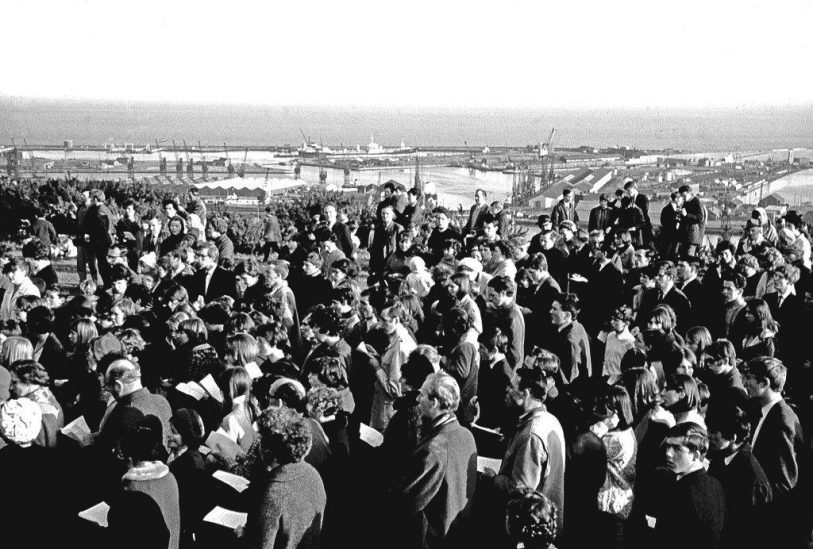 With Easter fast approaching, many of our readers will be dreaming of fluffy chicks or chocolate eggs. The people here were focussed on the more serious side of this commemoration and celebration that annually punctuates the religious calendar.

They were participants in a Christian Procession of Witness which wound its way up from St Mary’s Parish Church in the centre of Swansea up to the summit of Kilvey Hill one Good Friday during the 1970s.

Some of them took turns in carrying a huge wooden cross which once erected became the centrepiece of an open-air service. The picture is just one of the many snapshots in time to be found in the 18th book in consecutive years to result from the picture gathering of former Swansea journalist, author and publisher David Roberts. The arrival of his books has long become a date to look forward to in Swansea’s calendar and this year’s offering, Swansea – Memories are made of this! won’t disappoint.

Its fresh and fascinating collection of images of the city and its people in days gone by make it a must for everyone, and an ideal gift. For details on how to obtain a copy of the book, visit www.bryngoldbooks.com or phone 01639 643961. David is already starting to compile this year’s volume and is appealing for anyone with photographs to contact him as soon as possible on the number above.