My son Connor has ventured to Australia for a year of surf and travels. He’s been tasked with sending back a few postcards on his time there

Here are the first four: 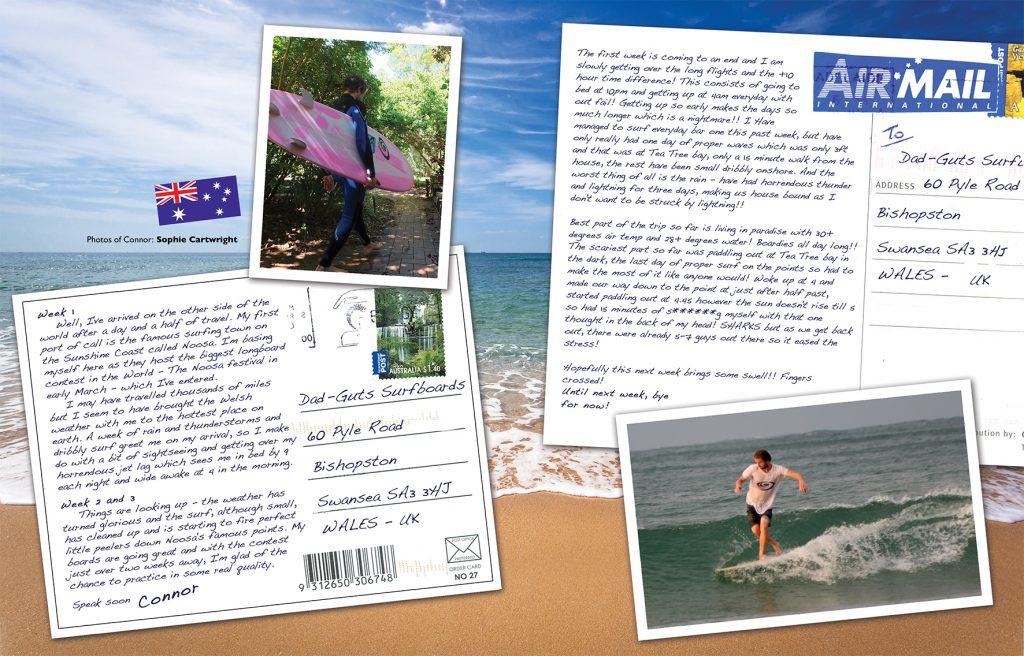 Well, I’ve arrived on the other side of the world after a day and a half of travel. My first port of call is the famous surfing town on the Sunshine Coast called Noosa. I’m basing myself here as they host the biggest longboard contest in the World – The Noosa festival in early March – which I’ve entered.

I may have travelled thousands of miles but I seem to have brought the Welsh weather with me to the hottest place on earth. A week of rain and thunderstorms and dribbly surf greet me on my arrival, so I make do with a bit of sightseeing and getting over my horrendous jet lag which sees me in bed by 9 each night and wide awake at 4 in the morning.

Things are looking up – the weather has turned glorious and the surf, although small, has cleaned up and is starting to fire perfect little peelers down Noosa’s famous points. My boards are going great and with the contest just over two weeks away, I’m glad of the chance to practice in some real quality.

The first week is coming to an end and I am slowly getting over the long flights and the +10 hour time difference! This consists of going to bed at 10pm and getting up at 4am everyday with out fail! Getting up so early makes the days so much longer which is a nightmare!! I Have

managed to surf everyday bar one this past week, but have only really had one day of proper waves which was only 3ft and that was at Tea Tree bay, only a 15 minute walk from the house, the rest have been small dribbly onshore. And the worst thing of all is the rain – have had horrendous thunder and lightning for three days, making us house bound as I don’t want to be struck by lightning!!
Best part of the trip so far is living in paradise with 30+ degrees air temp and 28+ degrees water! Boardies all day long!! The scariest part so far was paddling out at Tea Tree bay in the dark, the last day of proper surf on the points so had to make the most of it like anyone would! Woke up at 4 and made our way down to the point at just after half past, started paddling out at 4.45 however the sun doesn’t rise till 5 so had 15 minutes of s******g myself with that one thought in the back of my head! SHARKS but as we get back out, there were already 5-7 guys out there so it eased the stress!
Hopefully this next week brings some swell!! Fingers crossed!

Until next week, bye for now!

The second week carried on producing small gutless micro onshore waves! The weather has been slightly better but still been raining most days. With the surf being rubbish we had to find things to do. One day we all walked into town, had a look in a few surf shops but there’s only so many surf shops you can look in before it gets repetitive. Another day we went to ‘Wet and Wild’ water park! Fair play we need to have one of these back home. What a day out. Loads of massive slides, and loads of skin from your back being ripped off from the joins on the slides!

Luckily the last day of the second week produced small waves on the Noosa points! I managed to surf twice this day but found it hard to get many waves as the crowds were so thick.

There is meant to be some swell heading in next week but we were told this last week as well and this week has been flat! So not really expecting much but fingers crossed though!!

The third week flew by as there was actually surf! It hasn’t been the world class ‘Noosa’ that I’ve seen on video and photos but it’s been waist to chest high but perfect offshore peelers!! However the crowds over here are ridiculous. One morning I paddled out in the dark at 4:50am and there were already 7 guys out with another 5-6 people on the beach waiting to paddle out! And all this crowd for waist high waves!!

Mid week we went to ‘Australia Zoo’ what a day this was! Got to see so many different animals from crocs to otters to tigers!! Best part was watching the crocodiles eating meat out of trainer’s hands!