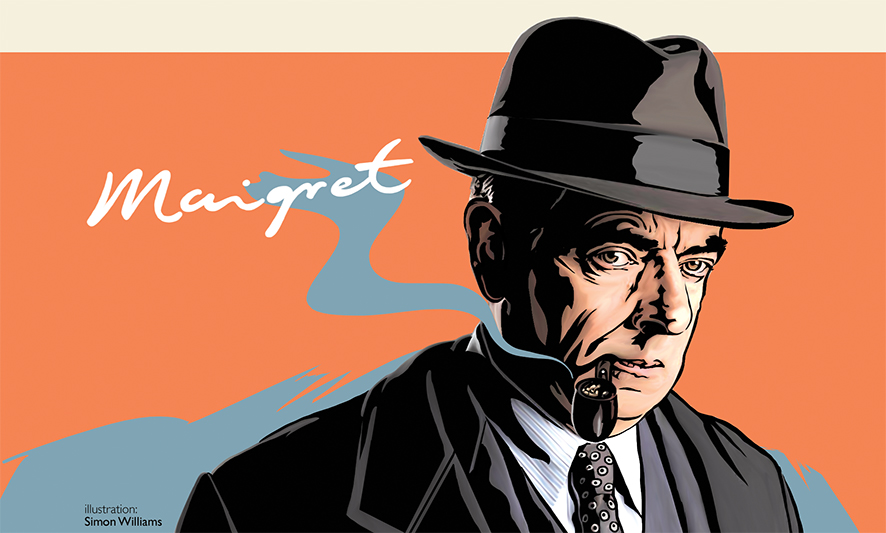 TV TIE-IN: If you are a fan of Belgian novelist Georges Simenon’s detective Maigret on TV as played by Michael Gambon, you will be delighted to hear that Chief Inspector Jules Maigret, hero of Georges Simenon’s beautifully written crime novels, will return to our TV screens next month with two new 120min feature length films starring Rowan Atkinson entitled Maigret Sets a Trap and Maigret’s Dead Man. Publishing house Penguin Books, reissues a new Maigret title every month and intends to continue to publish the Maigret series – one every month – till all 75 titles are back in print. I have just read Maigret’s Holiday (Penguin £6.99) and look forward to the next volume.

The second fortnight in February saw the celebration of Jewish Book Week 2016 in London featuring a galaxy of Jewish literary brilliance. This seems an appropriate time to look at a local effort given a platform by Welsh publishing house Seren.

Jasmine Donahaye is a Jewish writer living in Wales: Losing Israel is a non-fictional record of her visits to Israel and her subsequent disenchantment with the Israeli version of the displacement of Palestinian residents. Donahaye probes into the history of the ‘Occupation’ and the consequent removal of Palestinians from the kibbutz her mother grew up in, and other locations. She even makes clandestine, illegal sorties into neighbouring territories to justify her suspicions. She then discovers that Israel takes a dim view of suspected spies and she is subjected to delays and questions every time she enters the little nation.

It all seems a bit unnecessary, since the Palestinian/Israeli situation is discussed in the world media on a daily basis ad nauseam. The conclusion the disinterested observer makes is that tiny beleagured Israel, surrounded as it is by hostile and volatile neighbours, must needs take an equally aggressive stance in the interests of pure survival.

How comfortable it must be to denounce Israel’s misdemeanours from the cosy security of British life. With such delicate sensibilities, it is surprising that Donahaye and her ilk can bear to live in Britain which surely holds the world record in the brutal displacement of peoples for territorial and pecuniary gain.

This is a fashionable stance to take. In contemporary ‘liberal’ Britain it is a requirement — nay a credential — for so-called intellectuals to suddenly discover anti Semitism and to announce pointless boycotts of Israeli academic events. Should Israel respond with a few reciprocal boycotts of its own, the loss to the world would be felt far more keenly.

I personally have little interest in political posturing. I am a Hindu, neither Jewish nor Christian nor Moslem. I don’t know any Jewish people, and am open to opinions about them.

But the wave of anti-Semitism, now the vogue in Britain, I do find repellent. To be anti Semitic is to be anti-art, anti- science, anti-physics, anti-academia, anti-culture, music, literature. The Jewish contribution to intellectual activity still dominates the world and is respected by all thinking people — whether you like it or not.

I fly the flag for excellence, wherever it emanates from — Israel or elsewhere.

Donahaye sneers at the Israeli kibbutzim claim to being the real farmers of the area and glorifies the Arab fellahin as the true peasants. She is perhaps not aware that Israel’s advanced horticultural technology has been the saviour of semi-arid regions around the world (including my home-country, India), who use ground-breaking Israeli techniques to improve their yield and feed their people —- while the Palestinian peasant of Donahaye’s description continues to exhaust the land using medieval methods.

Fortunately the rest of the world does not share this negative attitude to Israel. The two biggest emerging economies, India and China have several high technology military and space joint ventures with Israel and it is heartening to note that even Egypt is assisting Israel in flooding the infamous Palestinian ‘tunnels’ to prevent terrorist access.

The world looks to Israel as an island of sanity and democratic values, in a frighteningly volatile Middle East seemingly programmed for self-destruction. Ideally, Israel should be spared the unwelcome attentions of dilettante detractors while it tries desperately to cope with the insanity around it.

A new novel by Umberto Eco is an event for celebration by all lovers of literature. Numero Zero is not as substantial physically and intellectually as his earlier works, the most famous of which is The Name of The Rose. His most recent novel, The Prague Cemetery (reviewed in BAY April 2012) was one of his best, with a plot of great complexity, written in a style so dense that the full attention of the reader was demanded if the book was to be understood at any level.

Eco is a cerebral Italian writer and journalist; his work is erudite, intricate and difficult, demanding total engagement and concentration — not unlike many of his contemporaries, for example British novelists Salman Rushdie, Tom McCarthy, and AS Byatt.

Conspiracy as a Concept

In Numero Zero, Eco once again indulges his obsession with sinister political conspiracies. Not satisfied with one, Eco introduces two conspiratorial themes: the first is the spurious setting up of Domani a newspaper that is never going to be published and the second is an investigation into whether the death of Italian Fascist dictator Mussolini was faked and his body-double lynched instead.

Our hero Colonna is a hack journalist who is employed by his colleague Simei to ghostwrite his biography, describing a year in the setting up of a fake new newspaper to be called Domani, secretly financed by a media moghul. Domani is itself to be used for blackmail, a Damocles’ sword created by the media magnate for political and financial control over his opposers.

This plot sounds a tad familiar. It has similarities with the infamous Rupert Murdoch’s creation in 1985 of a phantom Sunday paper The London Post to hoodwink the print unions into accepting the move to Wapping.

Domani, like The London Post has to look real and accordingly an editorial team is employed to get busy planning articles and preparing for publication — which is never going to happen.

As if this were not surreal enough, — Eco has a gift for creating wild scenarios with a vicious black humour that leaves the reader gasping — Braggadocio, one of the journalists on the team persists in pursuing his theory that Il Duce did not die at Lake Como. Proof of the truth of his suspicions is supplied when he is found stabbed to death in an alley. The denouement is action-packed and full of dark humour, Eco at his cynical best.

Umberto Eco is the intellectual’s Dan Brown of Da Vinci Code fame. On consideration, though, this comparison is rather odious. Dan Brown’s pedestrian style and poor prose wither under the brilliance and erudition of one of the greatest writers of our time: Eco towers above his contemporaries, a literary giant.

POST-WAR AND POST-WALL — A LITERARY LOOK AT BOTH GERMANYS

THE NEW SORROWS OF YOUNG W. by Ulrich Plenzdorf

Translated from the German by Romy Fursland (Pushkin Press £10.00)

When rebellious East German teenager Edgar Libeau picked up some paper to complete his ablutions in an abandoned shack in East Berlin, he found himself deeply engrossed in and influenced by the rest of the book: it was the celebrated 18th century German writer Johann Wolfgang von Goethe’s semi-autobiographical epistolary novel The Sorrows of Young Werther, written long before World Wars and Berlin Walls. Teenage dropout Edgar models himself as a modern Young Werther, emulating the doings of Goethe’s hero; in lieu of the letters sent by Goethe’s Werther to his friend Wilhelm, Edgar sends cassette tapes recounting his doings to his friend Willi. Edgar suffers from unrequited love and commits suicide as Old Werther did. His taped messages provide a remarkable insight into life under the East German communist regime.

The result is a novel as epochal as the best of JD Salinger: The German quality daily ‘Die Zeit’ called it “The Catcher in The DDR – Rye.”  Sometimes absurd, often fresh and funny, The New Sorrows of Young W has placed East German novelist Ulrich Plenzdorf firmly in the ranks of the best cult youth writers of the 20th century. (DDR stands for Deutsche Demokratische Republik viz German Democratic Republic or East Germany as we knew it before the Berlin Wall was demolished in a popular uprising in 1991)

BEFORE THE WALL AND AFTER THE FALL

BEFORE THE FEAST by Sasa Stanisic

Translated from the German by Anthea Bell (Pushkin Press £14.99)

The scope of Sasa Stanisic’s novel Before The Feast spans five centuries of German village life. Fuerstenfelde, a remote village in the Brandenburg region of the now reunited East Germany has over the centuries dealt with the vicissitudes of time; Stanisic tells us two stories in parallel, the present-day story of Fuerstenfelde’s celebration of the Feast of Anna and the development of the area from mythic medieval times to mundane modernity.

Stanisic writes lyrically, his style similar to the evocative beauty of Jim Crace’s Harvest or Kazuo Ishiguro’s Buried Giant. We encounter a mystical ferryman, wild wolves and wily foxes, fairy folk and spirits all interacting with the dysfunctional inhabitants of the village, inbred and weird, medieval and modern, from the mad artist to the ex Stasi (Secret Police) members, disturbed youngsters and violent encounters.

On the night before the Feast, there is a break-in at the village archive – revealing old secrets, stories and memories, myths and fairy-tales that make up this fascinating narrative. Saša Stanišić is one of the most highly regarded contemporary German writers. From his novel we learn about Wessies (West Germans) who come as tourists to gawp at the neglected and forgotten sites of a defunct and failed economy, and the resentful Ossies (East Germans) unsure that unification has changed anything except for those who migrated in droves to West German prosperity, decimating the population of the barren East German towns.

Before the Feast is a haunting and beautifully written novel, the prose perfect, the style poetic and the narrative engrossing and thought–provoking.

David Mitchell, much-admired author of Cloud Atlas (now a film) and the Booker shortlisted Thousand Autumns of Jacob de Zoet (my personal favourite, reviewed in BAY Sep 2010), has a place in the English literary pantheon as a bold and original stylist, his rich complex narratives parading unforgettable characters.

His new novel Slade House has a touch of the modern Gothic with mysterious doorways, soul-eating protagonists and nice normal citizens disappearing into the maw of shape-shifting demons and spirits and bears little resemblance to his earlier writings. But the unique Mitchell story-telling magic is still very much in evidence. David Mitchell is a master at gripping the reader’s attention from the first page and drawing you deeper and deeper into his inventive narrative.

Slade House is very much a contemporary work, tapping gleefully into our appetite for the supernatural and the para-normal in prose, either as good old-fashioned books or as films or video games. Earlier writers understood our craving for this genre very well, feeding us with deliciously blood curdling tales, amid their more conventional output; enduring examples include Mary Shelley’s Frankenstein, Horace Walpole’s Castle of Otranto, Bram Stoker’s Dracula.