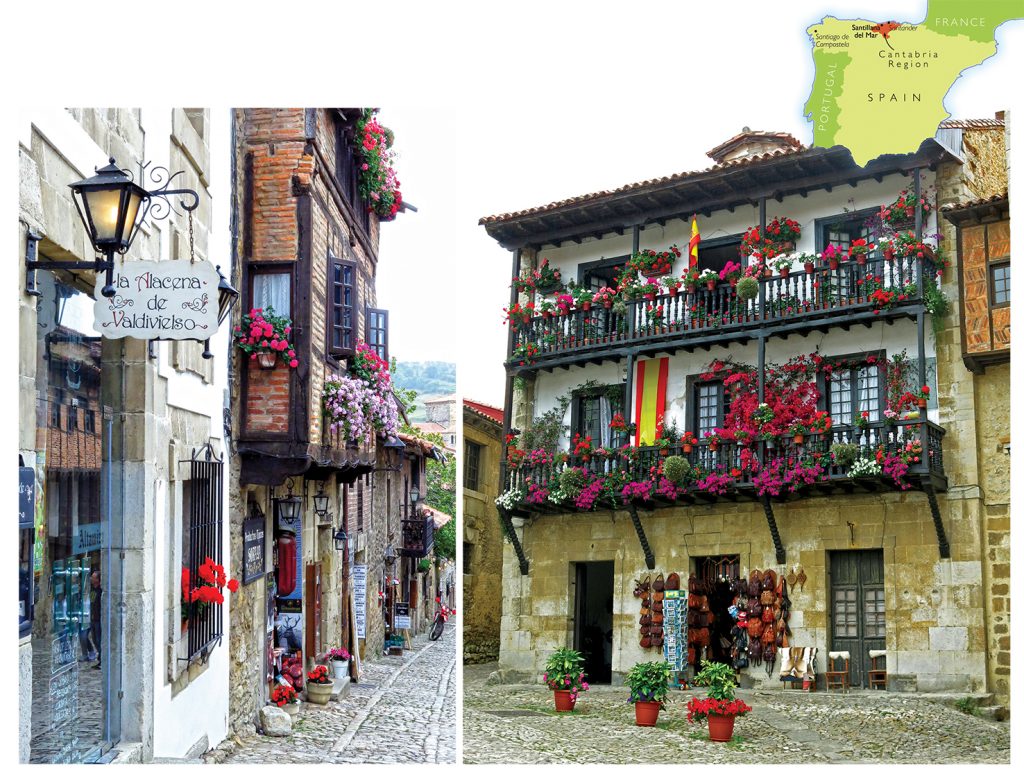 LAST YEAR, LIZ TRAVELED THROUGH FRANCE AND SPAIN STOPPING OFF AT SOME OF THE MOST PICTURESQUE TOWNS AND VILLAGES. THIS MONTH WE COVER HER VISIT TO THE CANTABRIA REGION OF SPAIN.

The town of Santillana del Mar in the Cantabria region of Spain, is only 30 km from Santander. It lies on the northern route of the Pilgrim’s Road to Santiago de Compostela, and its origins can be traced back to the 8th century.

At first glance this medieval jewel could be taken for a film set, with its shiny cobbled streets, stone buildings, dark wood balconies hung with blood red geraniums and not a car in sight. Not so, people do live here, and the houses are passed down through the generations. Strict planning rules first introduced in 1575, today include the stipulation that only residents or guests at hotels that have garages, may bring vehicles into the town; for all others there are car parks on the outskirts.

A stroll along Calle Santo Domingo, the main street in Santillana, leads you into the historic quarter; the stately mansions have stood here for centuries and are well preserved. The medieval architecture is some of the most important standing in Spain today, including the Torre del Merino and Torre de Don Borja (below left), two towers that were built as both military fortifications and as homes of the nobility; the entire town is registered as a National Monument.

An imposing but beautiful sandstone building, from which the town derives its name sits at one end of the Plaza Aban Don Francisco Navarro, the Collegiate Church of Santa Juliana (above top left & top right), built by monks in the 12th century as a chapel in which to display the relics of Juliana a 3rd-century Christian martyr from Turkey. It is considered one of the best examples of Romanesque architecture in Cantabria.

As evening approaches only those fortunate to find a room in one of the charming rustic Posadas, pitch a tent in the campsite nearby or stay at the Albergues (hostel for Pilgrims) can explore Santillana without the hustle and bustle of the day visitors.

The following morning I rise early so I can explore the town in relative peace and watch it awake. Carrier bags hang from the door handles of the houses, fresh loaves of bread peeking through; the baker has already completed his round.

Deliveries have to be made to the many restaurants and cafes housed in the ancient archways before the town becomes a pedestrian only quarter. Shops selling delicately crafted lace and local pottery are tucked away in side streets. Walking sticks for the pilgrims are sold alongside delicious cheeses and cider, and a speciality of the Cantabria region – a buttery cake flavoured with anise liqueur, often served with a glass of milk.

My time in this enchanting hamlet, Santillana del Mar, also known as The Town of Three Lies, since it is not holy or a Saint (Santi), nor flat (llana), nor is it by the sea (del Mar) had come to an end but my photos would serve as a reminder of this picturesque town.

Campsite within walking distance of the town www.campingsantillana.com