In this month’s article I am going to write about the history of the Swansea Docks, the collective name of several docks. Also, what information is available regarding the personnel who worked on the docks? Did you know that two of the docks are named after the same person, at different periods of their life?

Today, the docks under the ownership of the Associated British Ports, are a shadow of what they were in their heyday. One of the few ships, still docking here sails under the Norwegian flag of the Wilson Line. It unloads fertilizer, and comes from Germany – they are still trying their luck!  During the mid-19th century Swansea was exporting 60% of the world’s copper from the River Tawe Copper Industries, making Swansea known as Copperopolis.

During the 1760s, Swansea Harbour was being developed. Consideration at the time was given to how the coal and material resources from the Tawe Valley could be moved to the coast, for export. The construction for a canal had had a shaky start when the plans were opposed by the 6th Duke of Beaufort. Interestingly enough the present Duke, the 11th, was criticised in 2009, when he charged Swansea City Council £280,000 for permission to build a 70ft long bridge over his section of the River Tawe next to the Liberty Stadium. He is following his predecessor in his actions. The first section of the canal opened in 1796, being completed in 1798.

Construction costs were kept to a budget of £51,600, unlike today. The course of the canal is 16.5 miles incorporating 36 locks and 5 aqueducts, rising 373 feet.

The canal started at Abercaf, Breconshire and ran to Swansea Docks. The development of the canal led to the establishment of towns and villages, including Pontardawe and Ystradgynlais in the Swansea Valley.

The decline of the canal was during the 1860s, when the steel industry replaced the ironworks. The Great Western Railway used the canal, in moving materials for the creation of the railways. The last commercial cargo was in 1931. Soon after, the canal was filled in – although there are 5 miles still in use under the care of the Swansea Canal Society. The National Archives, Kew, has records of the Swansea Canal Navigation Company dating from 1790 -1918. There are miscellaneous records, although there seems to be no record of actual employees.

With trade booming and a rapid expansion of the industries along the Tawe, there was a need to provide more permanent harbour facilities. The Swansea Harbour Trust took over the responsibility in 1791. By 1852, the Town Float, later known as the North Dock had been completed; the dock was to provide more efficient port facilities. During the same year another private company, Swansea Dock Company, started to construct the South Dock – on the west bank and foreshore of the River Tawe, eventually Swansea Harbour Trust bought them out and the Docks were completed in 1859.

Swansea Harbour Trust completed in 1881 a third dock, Prince of Wales Dock, named after Edward, Prince of Wales that is situated on the east side of the Tawe. The dock was extended in 1898.

The port of Swansea continued to prosper during the nineteenth century, with the volume of industry and materials being exported worldwide increasing. Work started in 1904, when King Edward VII dug the first sod of earth in the creation of the Kings Dock – a larger dock on the seaward side of the Prince of Wales Dock, which was completed in 1909 and officially opened by King Edward VII, the second dock named after him. Finally, a long breakwater which encloses the large water, was to be named as the Queens Dock, officially open-ed in 1920, by Queen Mary, alongside her husband King George V.

At first, St Thomas was a small community with houses close to the docks – now demolished. With the expansion of the docks more houses were being built to accommodate the dockers and their families.

The houses were Victorian terraced-housing. The streets were named to commemorate battles from the Crimean War.

Mobs of men worked on a casual labour system, where, following the sound of a bell, which denoted the arrival of a ship, they had to present themselves each day at the dock gates. The Charge Hand would pick the men required for the day’s work; those who were picked were family, friends or even his favourites among the crowd. Neither the Swansea Canal Navigation Company, nor the West Glamorgan Archives Service hold records regarding employees.

The docks also provided a harbour for arrivals and departures. One of the notorious routes was around the Cape Horn, South Africa. The sailors were to be known as the Swansea Cape Horner’s. Journeys would last over a year stopping off at Santiago de Cuba, South America. It was a regular port to load copper ore. It was also a very unhealthy place. Sailors who lost their lives from the effects of yellow fever were either buried at sea, or in Santiago. It took months or even years for a relative to hear of a death at sea. The majority of these sailors came from Mumbles. One of the infamous sailors was David ‘Potato’ Jones, who earned his nickname whilst running guns during the Spanish Civil War under the guise of trading in potatoes. There is a memorial, erected in 2011 at the civic centre to the eleven men from Swansea, who served during this conflict. For those of you who are interested in the accounts of the ships, West Glamorgan Archive Service has Official Log Books and Account of Voyages and Crews of ships that were registered at Swansea. The information includes the name of the ship, official number, port of registry, tonnage; unfortunately they don’t have a list of crews. 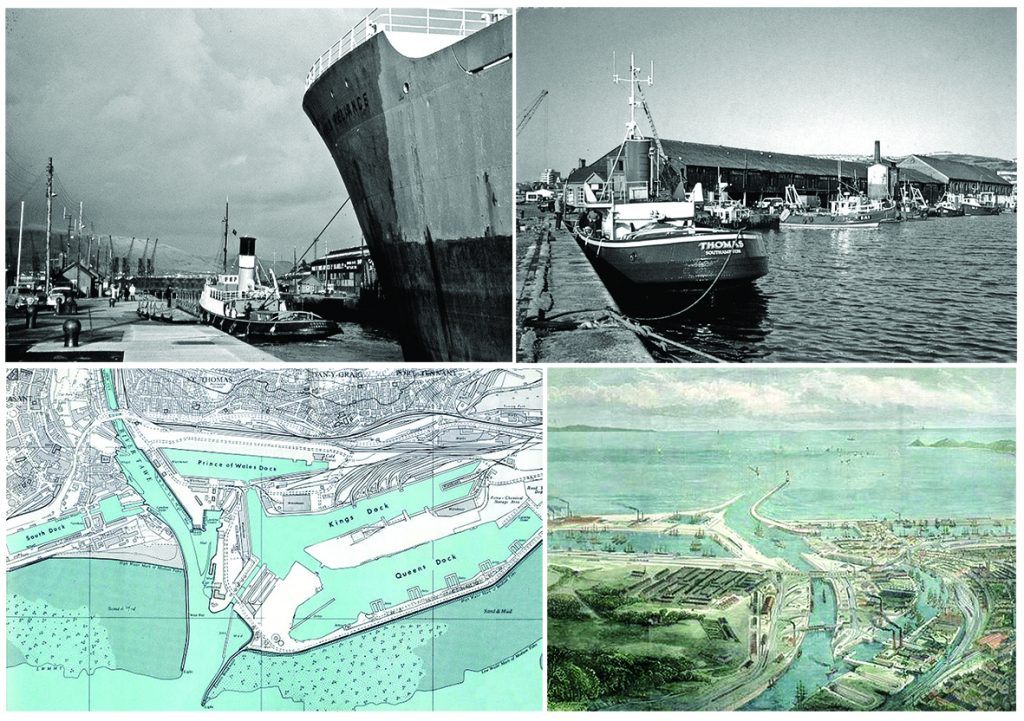 In my last article, Swansea Blitz, I wrote about the first house in Swansea to be hit by a German bomb on June 26th 1940. The South Wales Evening Post reported the next day, June 27th, a story entitled ‘where many bombs fall in the sea: Welsh town has its first raid’. The story had a quote from Mr Rees “We were asleep in the middle bedroom but were awakened by a heavy thud and a noise as if a wall had collapsed. I found the front room full of dust. Our little boy [Neville] had slept through it all, and we had to wake him up. There was no explosion”.

In my article I featured a photograph from the newspaper of the Rees family. To my amazement a few days later I received an email from Mr Peter Rees, the son of Neville. Peter informed me that it was a relative living in Swansea who brought the attention of my article to him.

Peter, kindly got his father’s memories of what happened on that night in June 1940 and sent me the following:

My father’s brother Bert and his wife were worried that the war might go on for some time, so they travelled from London to Swansea to stay with us at our house in Danygraig Road. They slept in what was normally my bedroom in the upstairs front room of the house. As luck would have it they left the afternoon before the bombing. My mother decided that I should return to my bedroom. However for some reason I didn’t want to go back, so after some discussion, my parents decided to let me stay another night in the middle bedroom where I had been sleeping while my uncle and aunt were with us.

If they had stayed another night, or I had returned to my usual bedroom, they or I would have been killed when the bomb landed, since it went right through the bed. What’s more, if it had not been a time-bomb and its mechanism had not jammed, all of us in the house would have been killed! There would also have been many other deaths in the street.

My first memory of the event was being woken up by my mother at about 3.30am. The lights in the room were on but the room was full of dust.  Lath and plaster were hanging out from the ceiling. My mother told me that something terrible had happened but not to be afraid. She wrapped me in my blanket and picked me up to take me downstairs but I told her that I wouldn’t leave until we found the large box of Cadbury’s chocolates that my uncle had given me before he left.

Having found the chocolates, my mother then carried me downstairs. Dust was everywhere and I could see my father and two ARP men trying to find the gas tap under the stove to turn the gas off. I was then taken around to Osterley Street where my aunt lived. First thing the next morning, my cousin was sent into town to buy me some clothes. In the afternoon of the next day, we returned to Danygraig Road and stayed in the house of some friends higher up the street. Much of the street was closed off and residents had been evacuated.

We were told that the bomb had been taken out of the house and would soon be exploded on Kilvey Hill, by a group of Indian bomb disposal experts. A little later, we heard a big bang and sometime after, a man came and told us all was now safe and he gave us two parts of the bomb as souvenirs. I still have these parts and, as arranged by TheBAY, will be sending them to Swansea Museum. After the bomb, we went to live at 532 Gower Road, Killay.

My father, Will Rees was a school teacher at St. Thomas school. He died in 1961, some months after I had gone to live in London. In London, I met my Australian wife. We then lived in California for 6 years before settling in Australia in 1972. We have two sons and two grandsons, and we all live in Sydney. In 1979, my mother came from Swansea to live with me in Australia. She died in 1981 and is buried with my father in Danygraig cemetery. We still have relatives in Swansea who have regular contact with us. We are all fans of Swansea City FC and wait anxiously for their match results. I saw my first Swans match in 1948.”

Photos from left to right:

Neville pointing to front window outside of his childhood house, Danygraig Road, 2010. Neville Rees holding two parts of the bomb, 2016. Close up image of the Nazi Eagle and Swastika, 2016

If the houses that we live in could speak, they could tell a story or two. This story is certainly one of those coincidences. When I wrote my article on the Blitz of Swansea in the February edition, I certainly didn’t expect so many responses. One of the last emails that I received was from Peter Rees’s cousin, Rob Jenkins. Rob informed me that it was his mother, Mrs Binnie Jenkins (nee Hale), who had made the family aware of the article. Rob, added another twist to the story. At the outbreak of the war, the Hale family lived at James Street, Sandfields, but after the bombs started dropping they moved to relative safety of 1 Cae Banc, Sketty – the address of Lesley, editor of TheBAY.

It is truly amazing how a story can develop. I would like to thank all those who contacted me it certainly added colour to the story.