Bees are among the first insects that can be seen out and about again in spring. But only some of the bees happily buzzing around the cheerful spring flowers are our carefully tended and pampered honeybees, which live in large colonies in comfortable hives. There are 274 other bee species in Britain which are completely wild, and the vast majority of these are solitary bees which spend all their lives on their own. It turns out that, for the females in particular, this is not an easy feat.

Among the most common solitary bees in Britain, as well as among the earliest to become active, are the mining bees of the genus Andrena. At first glance, many Andrena species look much like honeybees or small bumblebees. To make identification even more difficult, male Andrena are often smaller and a different colour to the females of their own species, while at the same time being so similar to males of other Andrena species that a microscope is needed to tell them apart.

Luckily, in several commonly seen Andrena mining bees, at least the females are quite unmistakeable, and also rather beautiful. Perhaps the most familiar of these is the Tawny Mining Bee (Andrena fulva). Much richer in colour than their name suggests, female Tawny Mining Bees are densely covered in bright reddish-orange hairs (photo 1), making them hard to overlook when they fly past, which they often do at a leisurely pace and quite low to the ground. As they go about their business, they are frequently accosted by hopeful males, which are smaller and much paler in colour (photo 2). 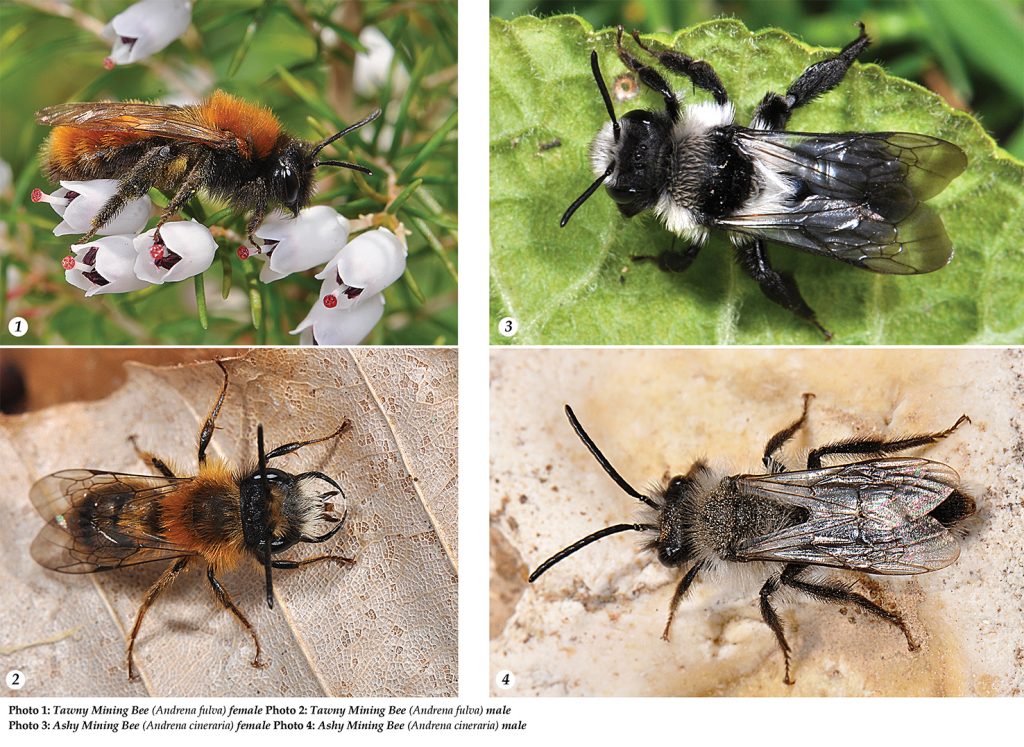 A rather different but equally striking species is the Ashy Mining Bee (Andrena cineraria). Velvety black with contrasting broad silver bands, the females once again sport the more conspicuous look (photo 3), but the males are also clearly black and silver, though smaller than the females (photo 4).

The Cliff Mining Bee (Andrena thoracica) can be distinguished from similar species by its orange thorax combined with a jet black abdomen and legs. In this species the female (photo 5) is quite similar to the male (photo 6), but the male is somewhat more slender. In contrast to the Tawny and Ashy Mining Bees, the Cliff Mining Bee has two generations each year, and adults can be seen from March to May and again from July to August. 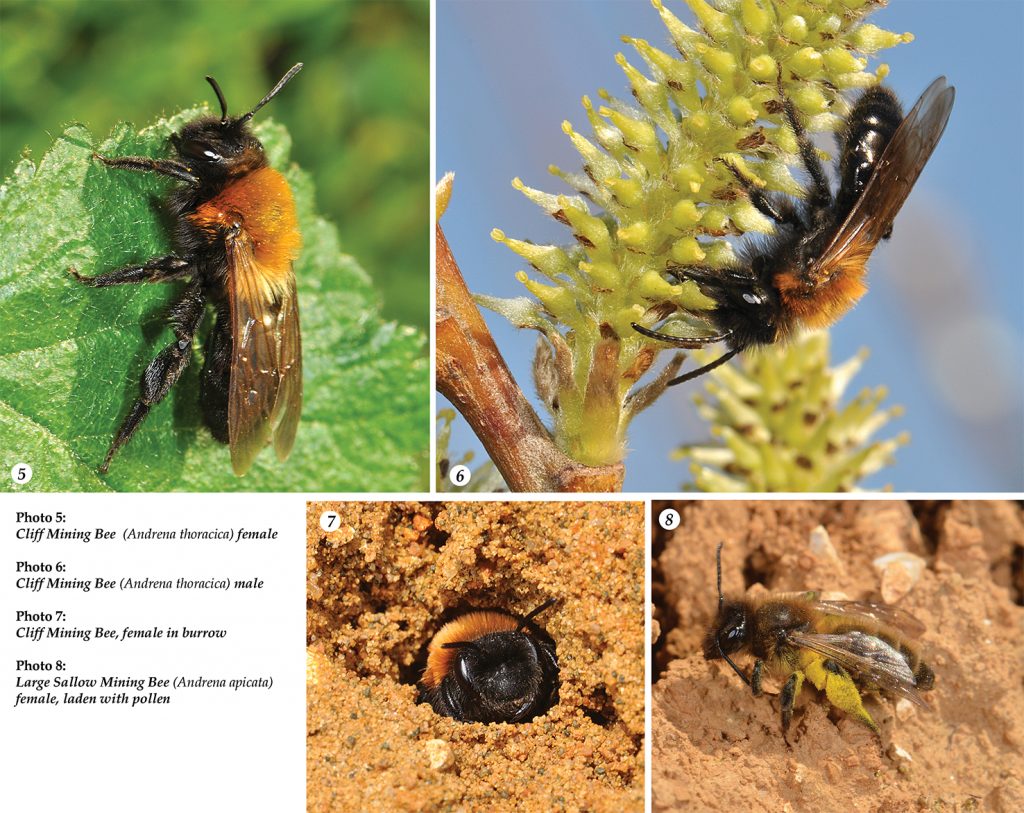 Female Cliff Mining Bees, like other mining bees, laboriously excavate deep tunnels in the ground in which to house their brood (photo 7). This is why they are known as ‘mining’ bees. The soil they remove from their burrows accumulates around the nest entrance in the shape of a miniature volcano. Depending on the soil structure, it takes a bee around 20 minutes to dig out a tunnel the length of her body. She accomplishes this by first biting at the soil and then pushing the loose particles backwards and out from under her body, rabbit-fashion, primarily with her front and middle legs.

Typically she keeps digging down until the burrow is 15-20 cm deep. Then she shapes small chambers off the main tunnel. Each chamber will serve as a nursery for one of her larvae. In contrast to honeybees and bumblebees which feed their larvae as they grow, mining bees place all the food a larva needs to grow into an adult into a nursery chamber along with an egg and then seal up the chamber, leaving each larva to develop on its own. The food they provide for their larvae is a ball of pollen, often mixed with a little nectar to help it retain its shape. It can take a female mining bee dozens of foraging trips to collect enough material for one pollen ball. The pollen is collected on special hairs along the legs and body and brushed off and shaped underground. Photo 8 shows a female Large Sallow Mining Bee (Andrena apicata) returning to her nest with as much pollen as she can hold.

As a result of having to work so hard to construct and provision a nest, a female mining bee is only able to provide for about ten young in her lifetime. But not all of her eggs will get a chance to develop, because mining bees often become victims of so-called cleptoparasites. These fascinating, though rather ruthless thieves are either other bees or flies which sneak into a mining bee’s nest just as a cell is ready to be sealed up and place an egg of their own into the fully provisioned cell. The thief’s larva then hatches before the bee’s and destroys the bee’s egg before feasting on the hapless egg’s provisions.

Some cleptoparasites can be surprisingly bold in their approach, for example the blood bee (Sphecodes sp.) in photo 9 which is keeping watch on a mating pair of Sandpit Mining Bees (Andrena barbilabris), ready to follow the female back to her nest as soon as mating is over. 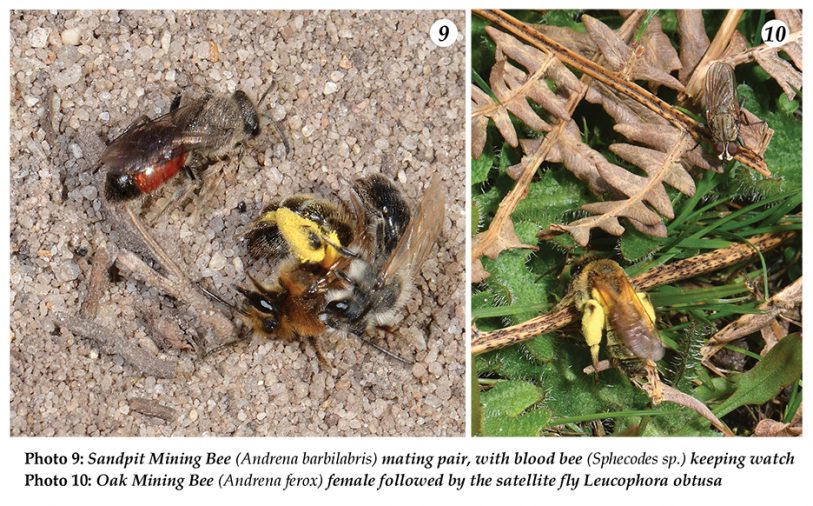 Satellite flies such as Leucophora obtusa (pictured keeping a close eye on an Oak Mining Bee (Andrena ferox) returning to her nest in photo 10) are named for their ability to successfully pursue mining bees even when the bees perform intricate aerial manoeuvres on approaching their nests in the hope of shaking off their stalkers.

Nomad bees (Nomada spp.) are perhaps the most specialised of the cleptoparasites, so much so that some species are entirely dependent on one particular Andrena species for their development. Many nomad bees are excellent wasp mimics, such as the Orange-horned Nomad (Nomada fulvicornis) (photo 11) and Gooden’s Nomad (Nomada goodeniana) (photo 12) both of which are able to take advantage of the nests of a few different mining bee species, including those of the (rather unfortunate) Cliff Mining Bee. Nomad bees can often be seen lurking near mining bee burrows, waiting for an opportunity to enter a nest undetected. Despite their menacing looks, nomad bees are quite defenceless, and rely entirely on their appearance to keep them safe.

It is fascinating to watch a mining bee excavating and stocking her nest and, if one is lucky, there may not even be a need to go very far to do so. This is because several species – including the Tawny and Ashy Mining Bees – can frequently be encountered in parks and gardens. Sometimes their little spoil heaps are taken for worm casts, an understandable error, especially in the case of smaller species such as the Slender Mining Bee (Lasioglossum calceatum) (photo 13), which particularly likes to dig its little burrows in turf (photo 14). The burrowing does not damage the grass and the loose soil disperses within a short period of time, so gardeners finding mining bee nests in their lawns need not be concerned.

In suitable spots, several mining bees can start digging their burrows in close proximity to each other. The sudden presence of a number of resident bees in a garden sometimes causes alarm, but again there is no need to worry. Mining bees are very peaceful and allow people to approach their nests without showing any aggression. Although they do have a small sting, they never use it unless their lives are in danger. If they do attempt to sting as a last resort in an extreme situation, such as when they are stepped on, most are unable to penetrate human skin, and those that do manage cause little harm because, unlike honeybees, they do not have strong venom.

But mining bees are not only interesting and harmless, they are also very useful. Compared to honeybees (which transport their pollen tightly packed in special pollen baskets on their hind legs), mining bees lose a lot of pollen from their bodies and legs during their collecting trips, which makes them even more efficient at pollination than honeybees. Many species are also more active at lower temperatures than honeybees, making them important pollinators of early flowering crops such as fruit trees, especially in cooler years. As a result, any gardeners lucky enough to spot these hard-working, loveable little insects in their garden may consider themselves on course for a bumper crop.