ROBIN D’ARCY, MANAGING DIRECTOR AT BAY ESTATE & LETTING AGENTS IN SWANSEA IS KNOWN FOR HIS DEVIL MAY CARE ATTITUDE TO HOLIDAYS AND SO IT SEEMS DOES HIS GIRLFRIEND ANNA.

LAST MONTH THEY JETTED OFF TO ICELAND FOR A FUN FILLED WEEKEND WHERE HE LEARNT A FEW LOCAL IDIOMS.

In a recent survey, 5,000 adults living in Britain were asked to identify the things that make us unique as a nation. Several stereotypical British traits topped the list. These included an obsession with class, sarcasm and a compulsion to talk about the weather. All I can say is that I’m glad I’m not that predictable…

As winter plumbs new depths of mild and we cycle through the latest Met Office named storm, a list which starts to resemble Katie Hopkin’s Rolodex of childhood friends (we’re onto “Imogen” at time of writing), thoughts turn longingly towards a winter break. Somewhere. Anywhere, will do. Just as long as it happens before rickets sets in due to lack of sunlight or my clothing requires a damp-proof course.

Most sensible people opt for somewhere warm to thaw/dry out, in search of that elusive winter sun. I had other ideas. After all, why tease yourself with a week in the sun only to be plunged back into inevitable and uncompromising winter on your return, with a bad case of the post-holiday blues? I say, go to the other extreme. Go colder. Come back conditioned and hardened to all that winter has in store, without any false hope of sunshine. Convinced? No, neither was my long-suffering girlfriend Anna, when I suggested a weekend in Iceland last February, but an opportunity to see the Northern Lights seemed to swing it.

So, as our carry-on luggage strained to contain as many duvet-thick items of clothing as possible, we made our way to Heathrow. After a two and a half hour flight and several embarrassing Facebook uploads of me sleeping, we touched down in Reykjavik, the world’s most northerly capital on the tip of a volcanic and mostly uninhabited island. Reykjavik is as tiny as it is cosmopolitan and is more like a town than a city by international standards. However, what it lacks in size, it makes up for in character, with attractively coloured corrugated iron-fronted houses, seafood restaurants, a backdrop of mountains, churning sea and cold, clean air. And cold it was, even for a cryophile like me. Layered up to the eyelids, we set off in minus temperatures in search of Hallgrímskirkja, an immense white-concrete church which dominates the skyline. In a city of otherwise few high rise buildings this should be easy to spot. Less so for two tourists with a poor sense of direction, unsighted by driving snow and blindfolded by woolly hats slipping over their eyes.

For all its biting cold, ironically Iceland is actually one big kettle. Situated at a crack in the earth’s crust where the North American and Eurasian tectonic plates are pulling apart (thanks, GCSE geography), the island has a huge amount of geothermal power at its fingertips. So much so that up to 80% of homes within Reykjavik are volcanically heated by glacial water. Although this ensures low energy costs, running the tap does bring with it a sulphurous, eggy smell (something that was unfairly blamed on me for the first day of our trip).

The city is the gateway to the natural wonders and aggressive, stunning landscapes of Iceland, which include mountains, rift valleys, glaciers and hot springs. So, after a night of thawing out in a cosy hotel it was time to climb back into the thermals and get going, or, as the Icelandic say, “on with the butter” (a phrase which doesn’t seem to be taking off back home, although I have tried).

First stop, rather mercifully, is at a giant bath. Set in a black lava field outside Reykjavik, the Blue Lagoon is one of Iceland’s most popular attractions drawing hundreds of thousands of visitors every year. The lagoon is a vast, geothermically heated pool and spa. It is fed by a nearby geothermal plant with water originating near a lava flow from 6,000 feet at its deepest level. The superheated sea water takes on a milky, turquoise colour due to it being rich in blue-green algae, mineral salts and fine silica mud. The water is particularly good for exfoliation, certain skin conditions and is an oasis of pure relaxation (just put the thought of other people’s dead skin flakes out of your mind).

On check-in, you are issued with a robe and slippers, electronic bracelet for the lockers, mud mask and drinks voucher for the bar. So far, so normal. Here’s where it gets a little less dignified. From then, there’s a mandatory naked shower and after smearing white silica mud all over your face, a shivering sashay outside onto the decking to hang up your robe and plunge into the pool before losing an appendage to frost bite. Ideally, this is something you do once and if I have one tip, it’s to make sure you’ve got everything you need from your locker the first time. However, if you have a partner who delights in sending you back and forth for (not entirely genuine) forgotten items, brace yourself.

Once you’re into the 38 degrees water and circulation is restored, it really feels like another world. Rolling clouds of steam surround you and the weather changes by the minute above your head while you stay comfortably warm, if a little wrinkled.

Bath time over, it was time for our first attempt at seeing the Northern Lights, a bucket list, natural light show where solar winds collide with the particles and magnetic field of Earth’s atmosphere to produce a fluorescent glow – or, as I explained at the time, the sky goes a bit greeny. Or, at least it should. Conditions need to be perfect with clear skies. Even then it’s not always the nuclear green colour that is captured in the photographs. After driving an hour outside the city, standing in the freezing cold with necks cricked to the sky, the only thing that was clear was that we weren’t going to see anything. Those with powerful cameras were able to pick up on something but both our point-and-clicks and our retinas weren’t up to the task. Defeated by the clouds, we were invited to try again the following night.

Our next day was spent exploring the Golden Circle, a 300 km loop that covers some of Iceland’s most spectacular natural phenomena. Among these are the island’s most famous water features – the geysers in the big bath. The geothermally active valley of Haukadalur contains the geysers, Geysir and Strokkur. Geysir is Iceland’s largest geyser. It last spewed out magma heated water over 70 feet in the air fifteen years ago but since then it has been pretty docile. Strokkur, in contrast, is like its hyperactive nephew and erupts without warning, every three minutes. Much time was wasted trying to time the perfect photograph to capture Strokkur at full height, which was a bit like trying to catch lightening in a bottle.

Altogether much easier to photograph was the magnificent Gulfoss waterfall. Translating as “golden falls”, this is a jaw-dropping 32 metre drop of water fed by Iceland’s second biggest glacier. 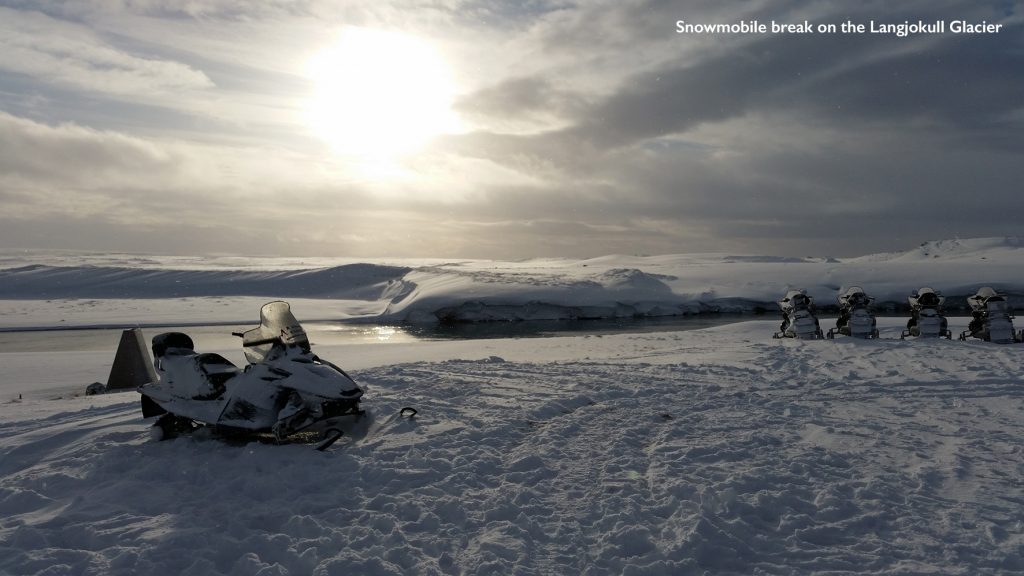 After all this relaxing nature, we decided to inject some adrenaline and stir things up a bit with a snowmobiling tour across the Langjökull Glacier. I don’t have the best relationship with machines so putting me in one that operates chiefly on a slippery surface was always going to be risky. I’d never jet skied or quad biked. In fact, very little qualified me for this experience at all except that I had once owned a Snow Patrol album but that’s probably not worth mentioning for a number of reasons.

As I drove in linear fashion across a vast expanse of Iceland’s lunar landscape, not even the breath-taking views could divert from how rubbish my driving was. Eventually Anna, petrified and mildly whiplashed, took over the driving responsibilities and order was restored.

Our final night brought one last opportunity to see the Northern Lights, this time by sea as we head out by ferry in the hope of seeing the elusive green over Reykjavik. The sky threatened to clear and at one point turned a suggestible shade of yellow but it would have been a bit of a stretch to call it a sighting. Instead, as a sort of strange consolation prize, the captain helped pass the time by reading out verses of Icelandic poetry for the bitterly cold two hours before we returned to shore.

So there was no glimpse of the Northern Lights but Iceland has more than enough natural beauty to feast your eyes on for it not to matter. It’s a destination that is growing increasingly popular and is no longer as eye-wateringly expensive as it used to be prior to the banking crash. It’s a magical island, clean, untainted and astonishingly beautiful.

In fact it’s hard not to gush or resort to cliché. It’s somewhere that even a Brit, desperate for respite from the latest storm, would forego their winter sun and return to time and again. And if you do manage to see the Northern Lights while doing so, well, as the Icelandic saying goes, that’s just the “raisin at the end of the hot dog”.