HYBRID AUTOS, WE ARE TOLD ARE THE FUTURE OF MOTORING, BUT JUST HOW PRACTICAL ARE THEY? LIAM TOOK THE MITSUBISHI OUTLAND-ER PHEV FOR A TEST DRIVE LAST MONTH, TO SEE IF A CLEANER FUTURE IS ACTUALLY A PRACTICAL PROPOSAL 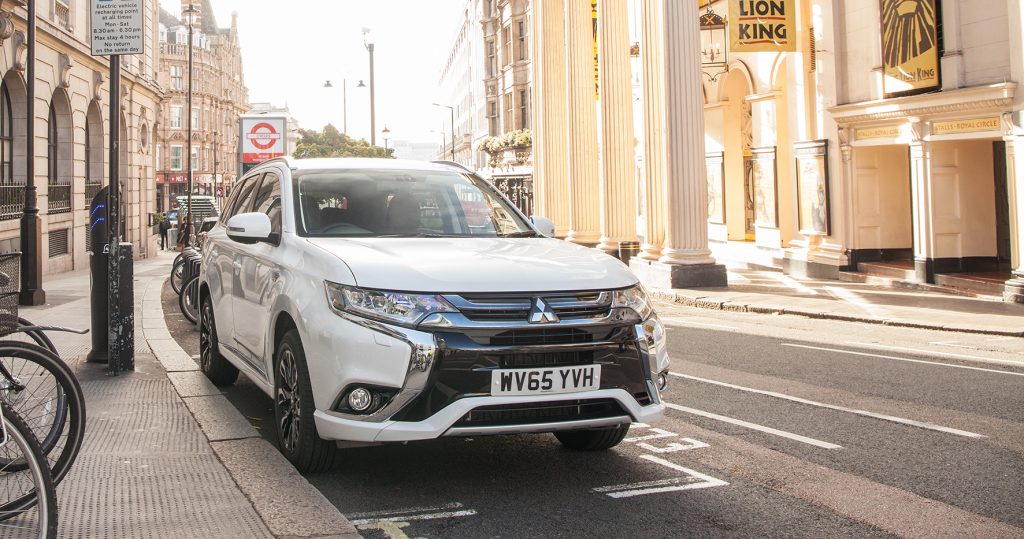 I think I may have been doing something wrong. It’s either that, or the problem lies with where I live.

Mitsubishi were kind enough recently to lend me the latest version their Outlander PHEV, but my average mpg recorded over the week fell somewhat short of what I was hoping for.

I know, I know, I’ve been doing this long enough now, not to believe what any manufacturer says, its latest offering is capable of on one gallon of unleaded or diesel – mpg figures are calculated rather than collected after-all. But nevertheless…

Now, for those reading this that are not quite so up to speed with Mitsubishi’s current model line-up, perhaps I should first explain what exactly the Outlander PHEV is, and perhaps even more importantly in this case, how it works. And let’s face it, this new version of the PHEV, looks exactly the same from the outside as any other 2016 Mitsubishi Outlander: same new blackened and sharper styled nose; same newer and re-profiled bumpers; same restyled rear-end; same everything. I think that was the idea though.

Even the interior is exactly the same at first sight. 2016 sees Mitsubishi’s spacious 5 seater SUV (there’s a 7 seat option too, but not on the PHEV) gain a sleeker, less button-festooned and thus more attractive, and more upmarket looking dashboard. They’ve also fitted thicker glass and paid attention to the panel gaps too in a bid to reduce noise and improve refinement. But to the layman at least there’s little to indicate any real difference.

Look a little closer though and things begin to reveal themselves.

There are two filler caps. One’s for petrol; there’s a 1998cc 4-cylinder engine under the bonnet. The other is for electricity: PHEV if you haven’t already guessed stands for Petrol Hybrid Electric Vehicle. Acronyms, the automotive industry loves ‘em.

HERE’S HOW IT WORKS

The petrol engine isn’t used in the same way it would be in a more, shall we say conventional, Outlander. Instead – and here’s the clever bit – the 2 litre 200bhp unit is employed primarily to charge an 80 cell lithium-ion battery contained in the chassis (that’s why they couldn’t fit those two extra rear-seats in). The battery then powers two 60kW motors; one in the front axle, and a torquier one in the rear. The Outlander PHEV, as a result, is four-wheel drive, five-seater, congestion-charge free SUV, with CO2 emissions of just 44g/km, zero VED (Vehicle Excise Duty), just 5% BIK (Benefit in Kind) and an official fuel consumption figure of, wait for it…. 156.9 mpg.

Mitsubishi say that once the battery is fully charged the PHEV will do 75 mph or up to 32 miles on the electrons alone. And should you choose to, it can be charged by idling the engine for 30 minutes, or by plugging the Outlander into the mains either via a charging point, or overnight from a standard 13Amp 3-pin socket. Clever eh?

Indeed it is! Slip the Outlander into drive and release the brakes and it whirrs down the road effortlessly. The engine cuts in when you need more oomph for overtaking or on a frosty morning when you’ve got the seat and steering wheel heaters on and the air-con too. And despite the slightly numb steering and de-rigueur body-roll during cornering the PHEV feels just like any other large and comfy SUV.

As I said, there’s little wrong with the car. Plug it in at night and again when you get to work and potentially, you could commute on battery power alone, never needing to bother a petrol pump for week after week.

That is of course, unless you live where I do.

My house sits on the High Street in a small rural village directly opposite a road junction. There’s no way I’m parking a car outside the front all night; it’s illegal to park opposite a road junction for starters. I can’t plug the PHEV, or any hybrid for that matter, in around the back either. I’d need an extension lead the length of the garden and I’ve no garage or outside mains outlets or sockets.

Leaving the PHEV running for half an hour in-order to charge its battery in either location is also not an option. Out here in the sticks any 4×4 is hot property. If I popped back in for something the Outlander may not even be there upon my return. It’s also illegal to leave a car running and unattended on the street too. It says so in The Highway Code – I looked it up.

To add insult to injury my nearest charging point in these far unlit parts is 17 miles away: 2 x 17 = 34. The Outlander only does 32 miles on a full charge and that’s with no heater, no demister, no radio, no infernal lane departure warning (I always switch that off!) and no hills. You’ve guessed it: ‘round here it’s hilly, very hilly.

To cut a long story short, I found myself charging the PHEV’s batteries as I drove, not the ideal solution I know. Neither is it the greenest. My average mpg for the week never rose above 40. Maybe a more straightforward diesel Outlander would’ve suited me better.

It’s all a little bit frustrating. And to reiterate, I’m pretty sure it’s not the fault of the car.

If I’ve learnt anything this week it’s that in certain circumstances, your ability to try to protect the environment depends very much upon the environment in which you live.