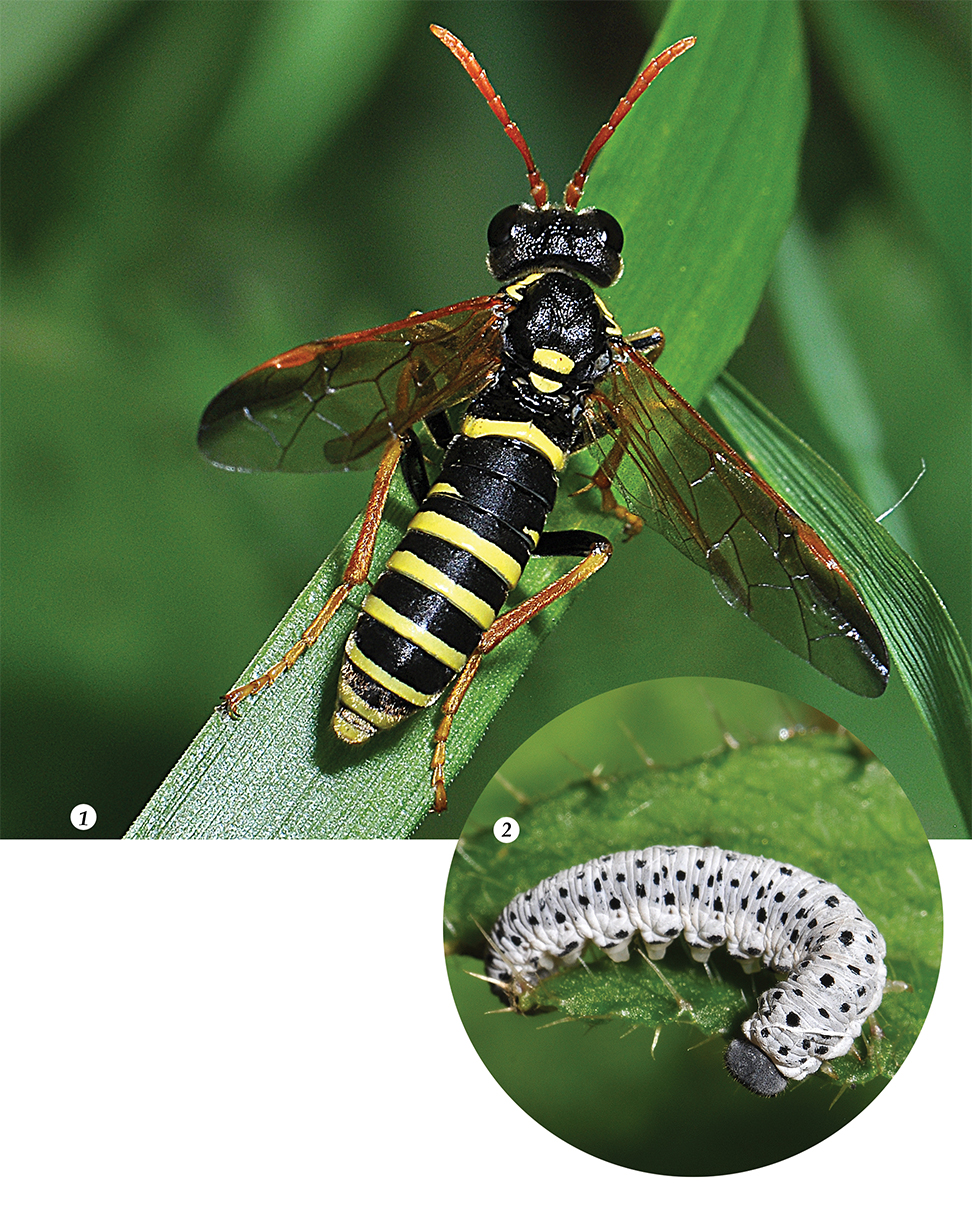 Flies by name, related to wasps by nature, but largely vegetarian in their tastes and at the same time considered tasty by many, sawflies truly are some of the strangest insects in Britain. With over 500 resident species they are not uncommon, but many lead secretive lives, successfully concealing their behavioural peculiarities and life histories from all but the most dedicated observers.

Sawflies, along with bees, wasps and ants, belong to the order Hymenoptera (literally ‘membrane wings’), and possess the wing arrangement typical of the order, namely two pairs, with the fore- and hindwings connected to each other in flight by a series of hooks. In contrast to their bee, wasp and ant relatives, sawflies do not have the typical narrow ‘wasp-waist’. They also lack stings and even the most fearsome looking sawflies are merely excellent mimics which are entirely harmless.

Sawflies get their name from their intricate egg-laying apparatus, which in most species incorporates a pair of miniature saws that are used to cut slits into plant tissue into which the eggs are placed, safely out of reach of most predators. This remarkable ovipositor is not usually visible because in most species it is folded up underneath the abdomen when not in use, much like a Swiss army knife.

Some sawflies are easily recognizable, both as being sawflies and with regard to their species. One example of such an accommodating species is the Figwort Sawfly (Tenthredo scrophulariae) (photo 1). It is a lovely bright wasp mimic and often rests with its wings slightly apart, leaving its wide waist easily visible. The pattern and colouring is unmistakeable, with bright orange antennae, an orange leading vein in the front wings and black thighs on the hind legs. Adult Figwort Sawflies, like most adult sawflies, feed on nectar and pollen, but they are one of several species that will also hunt small insects. The larvae feed on plants in the figwort family such as the Common Figwort (Scrophularia nodosa) and Mullein (Verbascum spp.). They, too, are easily recognized, looking a lot like wrinkly silvery caterpillars with black spots (photo 2). The fact that they have eight pairs of prolegs (small soft accessory legs along the underside of their bodies) can be used to distinguish them from caterpillars, which never have more than five pairs. 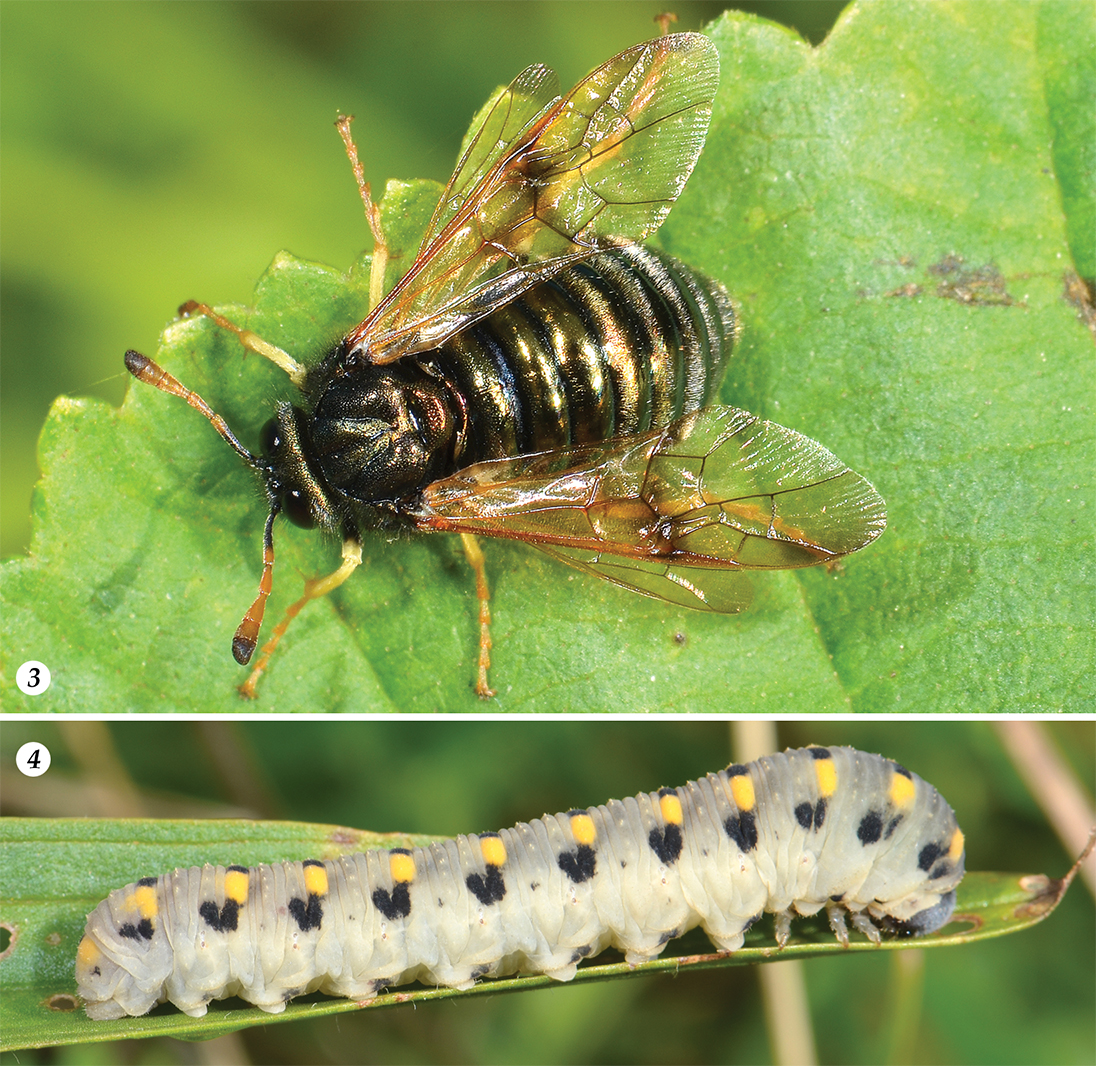 Other species are not quite as instantly recognizable as sawflies, for example the two British members of Abia sp. (photo 3). Their broad, metallic bodies and loud, buzzing flight are superficially reminiscent of large flies and only closer inspection reveals the longer antennae and two pairs of wings characteristic of sawflies. Their larvae, however, are of typical sawfly appearance (photo 4) and can be found on Field Scabious (Knautia arvensis) and, in the case of Abia sericea, also on Devil’s-bit Scabious (Succisa pratensis). 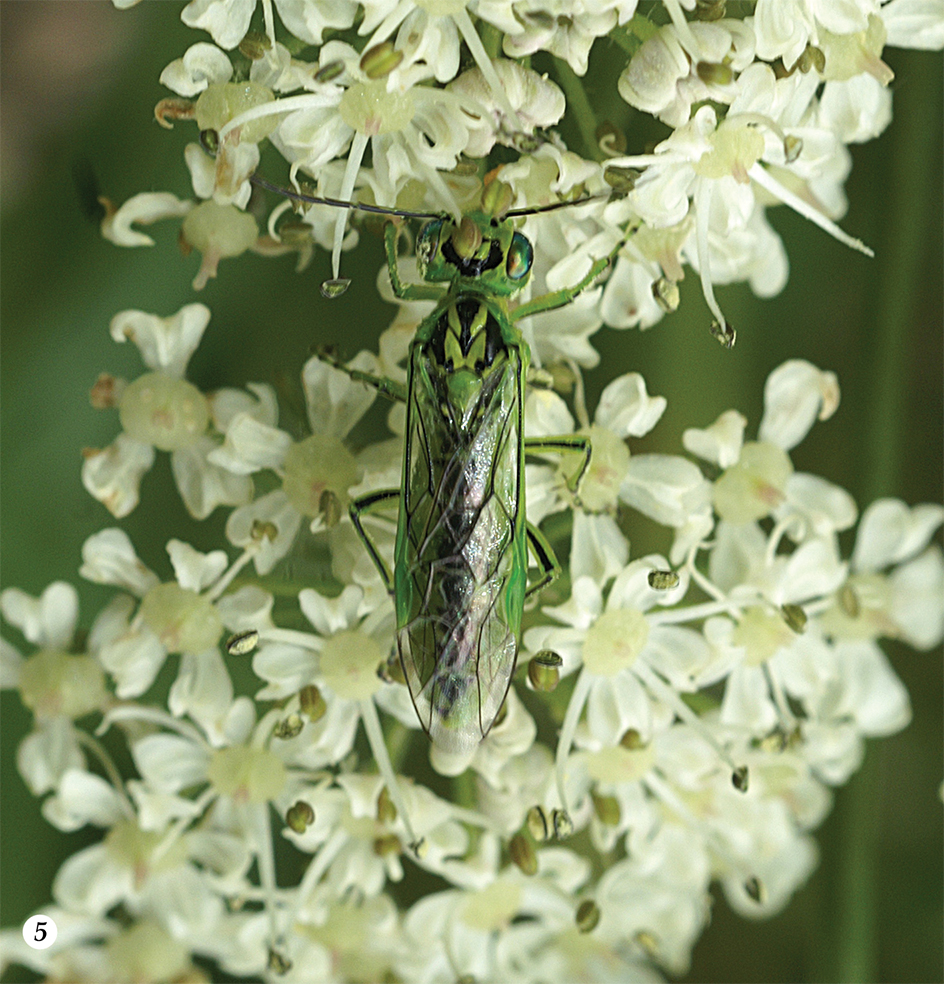 Many sawfly species pose even more of a challenge, keeping their waists out of sight, their wings folded and – even once identified as sawflies – making things difficult by belonging to one of several very similar looking species. The Green Sawfly (Rhogogaster viridis) (photo 5) and the Green-legged Sawfly (Tenthredo mesomela) (photo 6) are good examples of such less easily identified species. In fact, the majority of British sawflies can only be identified with the aid of a microscope, and in some cases the only way to reach a definitive conclusion as to which species a specimen belongs to is to dissect its genitals. Little wonder that sawflies are only studied by the most dedicated of entomologists. 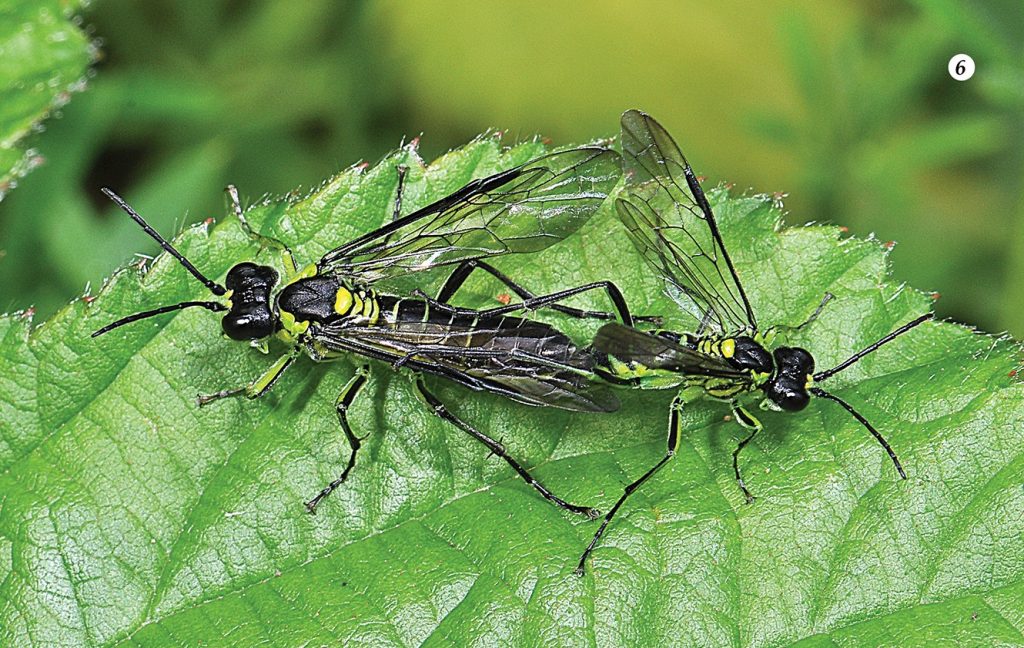 Sawfly larvae can be equally difficult to tell apart and sometimes, if one is really determined to find out which species of sawfly a larva belongs to, one has to rear it in captivity and see what kind of adult emerges. Some sawfly larvae live inside plant galls (abnormal lumps of plant tissue) or rolled-up leaves, both of which are triggered by chemicals which the females of some species inject into the plant alongside the egg. These structures can be quite distinctive and their appearance, combined with the type of plant they are found on, can give away the identity of the occupant. The majority of sawfly larvae, however, have to make do without such elaborate dwellings, which leaves them vulnerable to predators. As a consequence, many have developed the ability to store distasteful plant chemicals taken in with their food and release these when attacked. For added protection, many live in groups (photo 7). When they feel threatened, the larvae of many species give predators a chance to reconsider by displaying a distinctive defensive posture (shown by some of the young larvae in photo 7 and the two older larvae in photo 8). 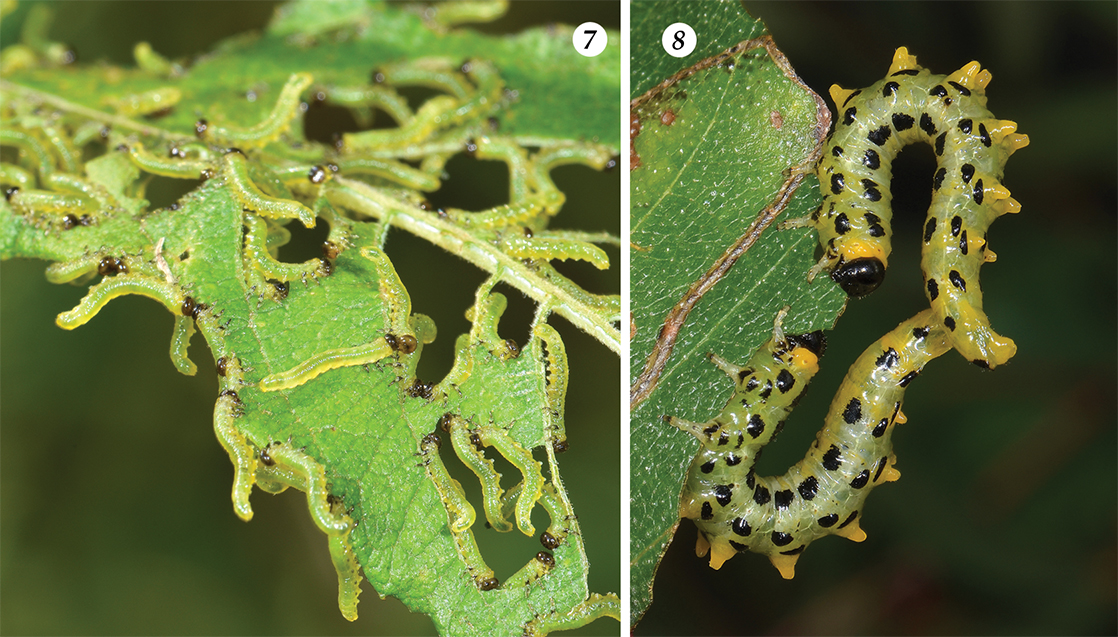 While their chemical defence can be fairly effective against invertebrate predators, larger predators are not as easily put off. As a result, if their foodplant is disturbed vigorously they let themselves drop to the ground and curl up tightly, hoping for the best (photo 9). 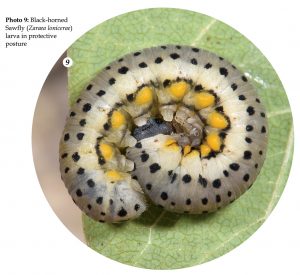 Sawfly larvae are an important food source for many birds, so much so that it is believed that there is a direct link between a decline in sawflies and the decline of certain farmland birds. Many sawfly larvae pupate in the ground, where they become favoured prey items for a range of ground-living predators including shrews and mice.

Not only are sawflies on the menu of a vast array of hungry hunters, as a result of the herbivorous dietary habits of their larvae they are also often persecuted by gardeners. It is true that the activities of a large group of growing sawfly larvae can give reasonable grounds for objection on the part of the gardener. The most common objects of contention are Solomon’s Seal, gooseberries and roses, all of which certain species of sawfly find so irresistible that they have been known to completely defoliate them, while gardeners generally prefer them with their leaves in place.  It is, however, only a tiny minority of sawfly species that cause any problems, the vast majority go about their business without any of us being any the wiser.

There is, however, one British sawfly that – once encountered – is impossible to forget, namely the magnificent Horntail or Giant Woodwasp (Urocerus gigas)  (photo 10). Females are up  to 4 cm long and their ovipositor is half as long again, making them one of Britain’s biggest insects. They spend most of their time in pine forests, where their larvae develop in dead or dying trees. The females use their fearsome looking ovipositor to drill deep into the wood before laying an egg.  Along with the egg they inject a special symbiotic fungus which starts to grow in the wood, breaking it down in the process. The Horntail larva then feeds on the fungus, spending up to three years in its tunnel in the wood before it is ready to pupate. Female Horntails possess special structures inside their bodies that allow them to take the fungus with them when they finally emerge, ready to pass it on to the next generation. 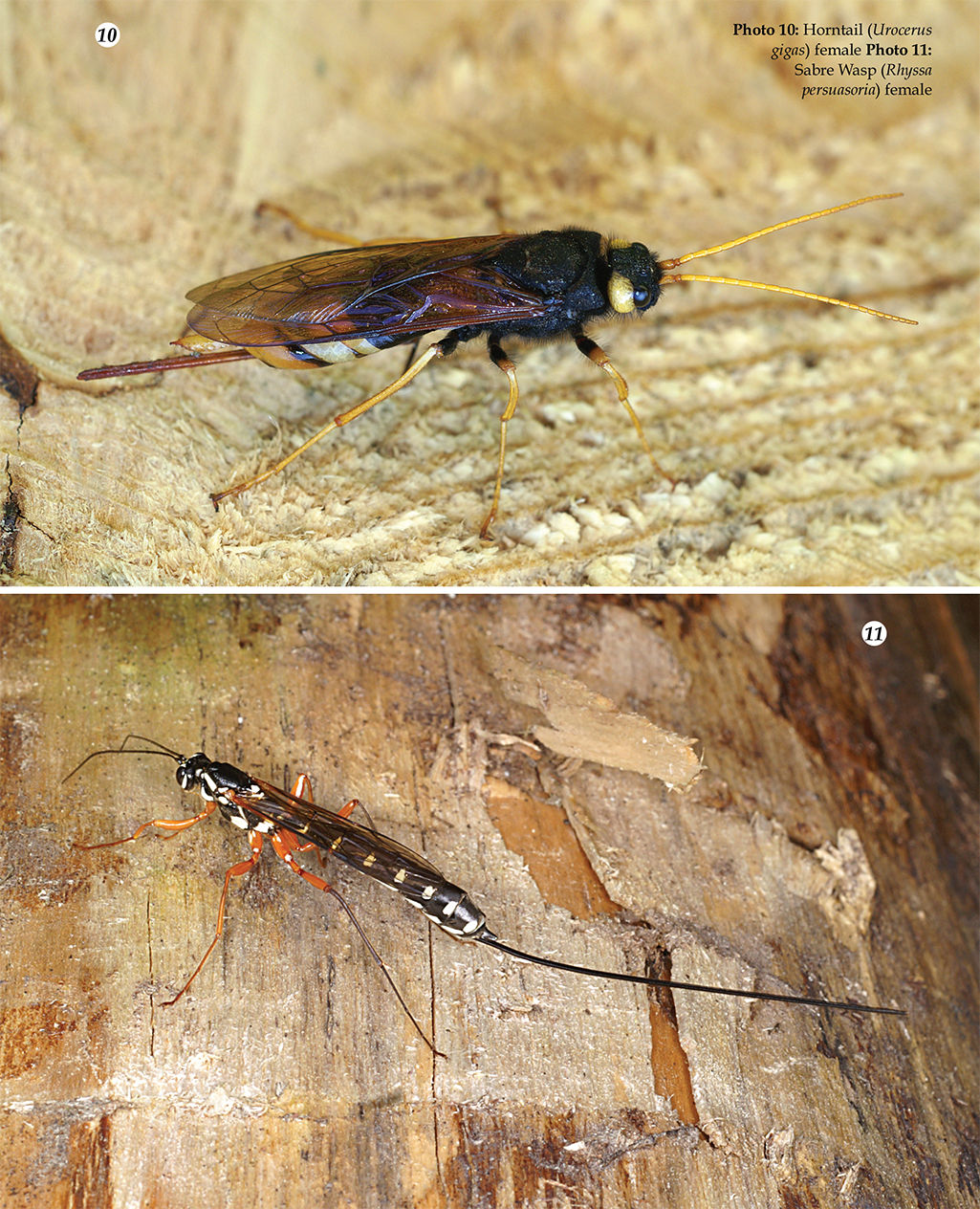 Placing their larvae into a totally enclosed, fully provisioned tunnel under several inches of wood, Horntails would appear to have hit upon the Fort Knox of nurseries. And indeed, with the exception of very determined woodpeckers there are few predators that are able to get to the developing Horntails. There is, however, one species that is the stuff of nightmares for larval Horntails, and contrary to expectation it is not a large vertebrate predator but instead a related insect, the striking Giant Ichneumon or Sabre Wasp, Rhyssa persuasoria (photo 11). This unmistakeable wasp is even longer than the Horntail, measuring up to 5 cm from head to tip of abdomen, with an ovipositor of the same length. It is, however, more slender and less hornet-like, so less prone to causing alarm in a casual observer. 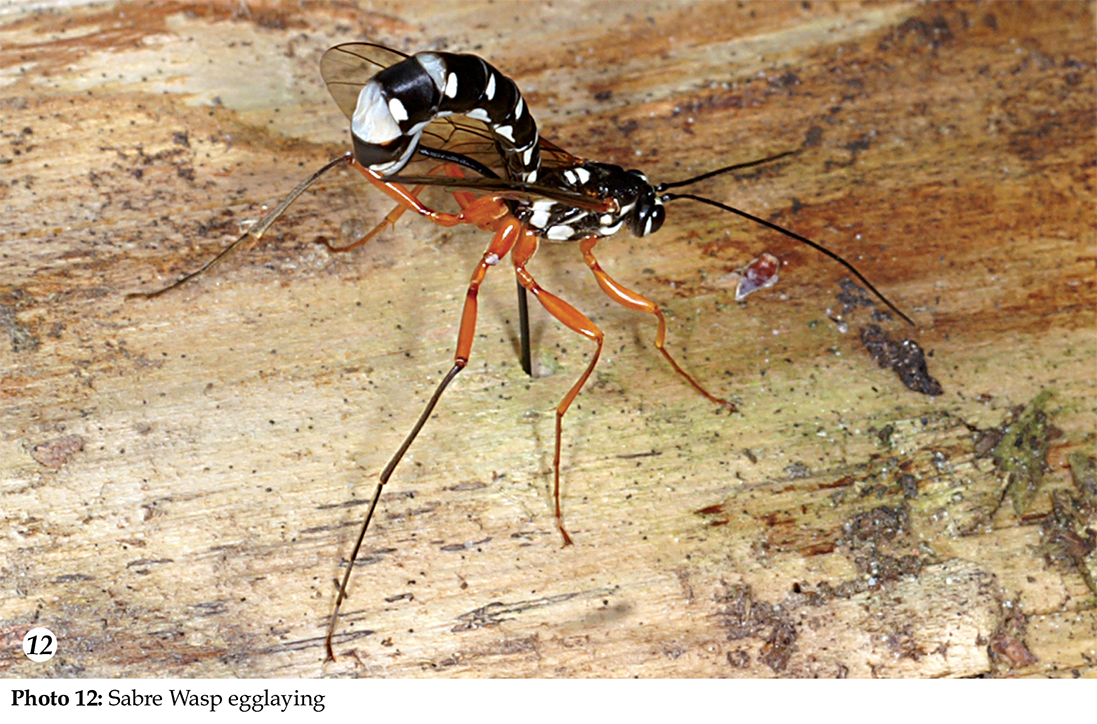 Like the Horntail it is quite harmless to humans, although its ovipositor superficially looks like a sting. It is not at all harmless, however, as far as the Horntail larvae are con-cerned. The Sabre Wasp uses chemicals produced by the Horntail’s symbiotic fungus to detect the presence of a mature larva in the wood. It then uses its long ovipositor to drill its way into the larva’s tunnel where it injects a paralysing toxin into the helpless soft-bodied larva before laying an egg on it (photo 12). When the Sabre Wasp’s larva hatches, it goes on to slowly devour the paralysed Horntail larva over the course of several weeks. By re-maining alive for much of this period, the Horntail larva does not decay and the tunnel remains free from potentially harmful bacteria and fungi which could interfere with the development of the Sabre Wasp’s larva.

As a result of the charismatic nature of both parties, the gruesome relationship between the Sabre Wasp and the Horntail is well known and documented. What is less well known is that most other sawfly species, too, have similar enemies. Depending on species, these may attack either eggs or larvae, and feed on their unfortunate victims from the outside or develop inside their bodies. As a result of the sawflies’ secretive lives, much remains to be discovered about the details of these strange relationships as well as other sawfly idiosyncrasies, and there is no doubt that many more fascinating discoveriesabout these enigmatic insects will be revealed in the future.