SWANSEA AND DISTRICT BRANCH OF CATS PROTECTION ALWAYS HAS CATS LOOKING FOR THEIR ‘FOREVER’ HOMES. HERE ARE JUST A FEW PICTURED ON THESE PAGES… 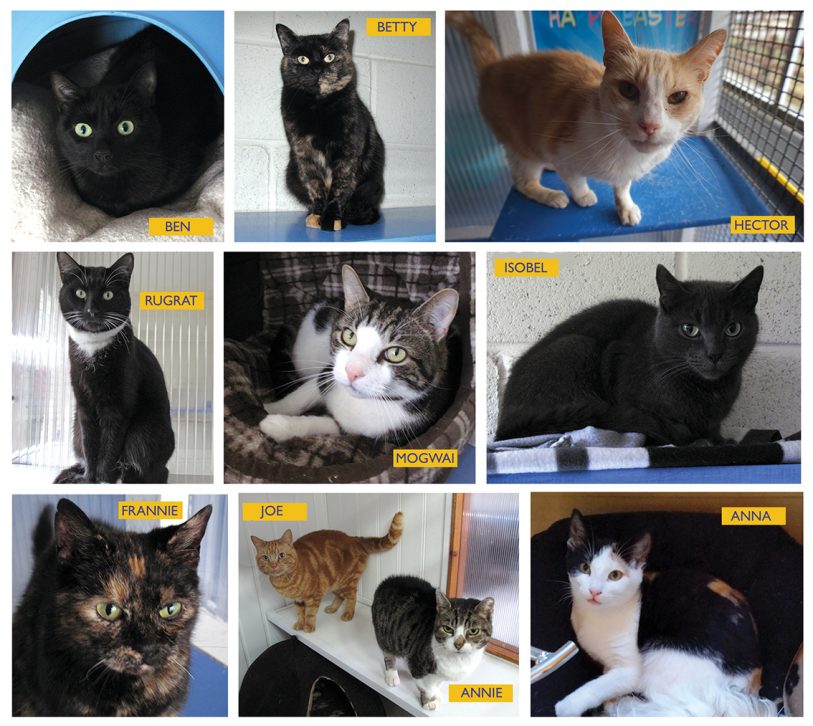 Ben is a young male cat about 18 months old, unfortunately the children in the family are allergic to cats, so Ben is looking for a new home. He’s very friendly and used to children, he’s also very vocal and just wants to be loved.

Betty is one of our young mothers from last summer. She had 4 kittens that have all been homed. Betty is a sweet girl of around 2 years old. She has a sensitive stomach but we have found a grain free cat food that agrees with her. Her new owner will have to be prepared to keep her on this food.

Hector is a friendly male cat who is about 10 years old, he has been a stray for a few months. Kind people were feeding him until we could take him in. He has some permanent damage to one of his eyes but can still see out of it. He is a friendly, affectionate cat.

Mogwai is 5 years old and came into us with Rugrat who is a 3 year old, as their owner could no longer look after them. They have been used to living with dogs, other cats and children so would suit any home.  We would like to find them a home together.

Isobel is a beautiful, grey, young female, she came into us as she had been straying for a while. She was very traumatised when she first came into our care but has now calmed down since she has realised she’s amongst friends! However she will have to be handled with care and treated with respect, but whoever has the patience to adopt her will be rewarded with a beautiful cat as a companion. She would not be good with young children or other cats.

Isobel has to be the only cat in the household. She is approximately 18 months old.

Frannie is a sweet, friendly cat of around 6 or 7 years of age. She had been straying for a while. It is thought that she was made homeless when her owner, who was an old lady, died.

Joe is a lovely boy of 9 years old. He came to us as his owner had to move and wasn’t allowed to take him along. He is extremely loving once he gets to know you. Joe and his friend Annie (they came from the same household) love each other so have to be homed together.

Annie is about 10 years old, she has been left behind by her original owners, a neighbour started to feed her thinking she was a feral cat but she was not and is now very friendly towards people and demands attention. Her best friend is Joe who was taken in by the same lady. Joe and Annie are to be homed together.

Anna is a 7 months old kitten. She was born to a stray cat who herself was domesticated, but because the kittens weren’t handled at a young age they became scared of human contact. She has been in a foster home and due to the fosterer’s handling has become friendly. She is used to other cats and a small dog. She probably would not be good with young children. Anna’s best friend is Molly the dog!

A success story from last month’s issue of TheBAY is that Tuxedo who was one of the cats featured was re-united with his owner. He had been missing for about 6 weeks, luckily the owner’s daughter saw his picture in TheBAY and recognised him as Fluffy, her father’s cat!

To offer a cat a home, or if you are interested in volunteering for us, please contact us by one of the following methods: