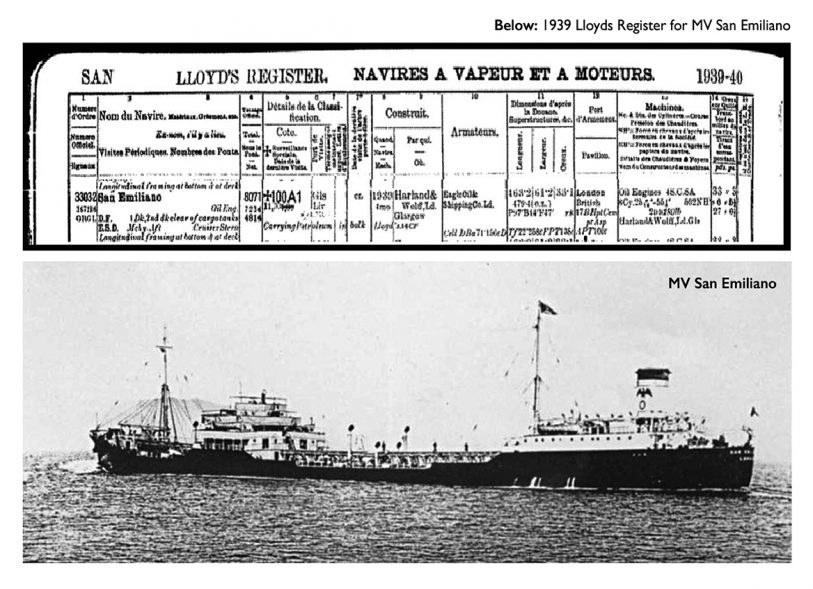 Continuing the theme of last month’s article on the docks in Swansea, this month’s topics will include the Lloyds Register and ship’s passenger’s lists. Lloyds Register was first published in 1764-66, 1786-71 and then annually since 1775. Vessels, self-propelled merchant ships of 100 gross tonnes or heavier, are listed alphabetically by their current name. The register charts their service history, and they remain on the register until the vessel is either, sunk, wrecked, broken up or hulked (the term used when a ship is given a change of use), for example a prison ship. There are two ways in which way to obtain the information from the register. The first is by visiting the Research Room, Lloyds

Headquarters, 71 Fenchurch Street, London, or secondly searching for the particular ship using the Lloyd’s Register of Ships Online. This online register does not have every year covered.

The extract that is being used (above) is from the 1939 register, for the newly constructed MV San Emiliano, a motor tanker owned by Eagle Oil & Shipping Co. Ltd. She left Swansea in April 1942, and was sunk by a German U boat (submarine) U-155 in August 1942 off the coast of Trinidad. From a crew of 48, there was a loss of 40, 3 of whom were Swansea men, Jack Bastow, John Charles Caplin and Ernest Woollard. The sinking of the MV San Emiliano was to feature on the 1969, The World at War TV series.

Whilst researching ones family history, it is interesting to discover why some family members have started new lives in different countries. We have to look at questions such as why do people set out on emigration, and what type of emigration there was at the time?

Emigrating from Wales started as early as the 1600s to one of the following destinations: United States/South America, Canada, India, Australia and New Zealand. Movement around the United Kingdom at this time didn’t require any documentation for people to settle down. Records were needed for the United States from 1776; Canada before 1865; Australia, New Zealand and South Africa during the 20th Century.

The different types of emigration are:

A final note – during the 1860s Swansea was ‘home’ to an influx of migrants from Ireland during the potato famine, who settled in the Greenhill area, known as the Little Ireland. Also people came from Devon to work in the Swansea Docks. A large number of people did emigrate from Wales, but they didn’t quite make it overseas, just to the North of England! 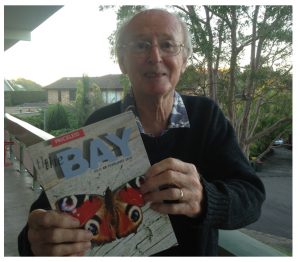 I received this lovely photograph of Neville Rees (right) from Australia holding the February edition of the TheBAY which featured an article on his family home, the first house in Swansea to be bombed during the Second World War.

This April marks the 104th anniversary of the sinking of RMS (Royal Mail Steamer) Titanic on the 15th April 1912, during her maiden voyage from Southampton to New York with the loss of 1,500 lives. Many of those on board were embarking on a new life in America.

The RMS Titanic was only listed in the Lloyds Register once. It comes as no surprise that there is a connection with Swansea and the surrounding areas, with several men being either passengers or crew on the fated ship. They were David Bowen, boxer (victim) Evan Davies, Swansea Valley (victim); Wilfred Cyril Foley, Swansea born (survivor); William John Rogers, Swansea valley (victim); Robert William Norman Leyshon, living in Swansea; his father was a prominent Swansea solicitor (victim); Owen Wilmore Samuel, worked and lived at Ben Evans, Temple Street (victim) and Leslie Williams, boxer (and victim).

I was contacted by Mrs Moseley from Newton, regarding the Titanic. Here is her story;

My mother’s first husband was on board the Titanic. Leslie Williams, 28, (pictured above left) came from Tonypandy and was a professional boxer. Travelling on the same ticket was a fellow boxer, David Bowen from Treorchy, Rhondda. Their manager, Charles A. Barnett had arranged a series of boxing fights in America for them. The two men boarded the Titanic at Southampton. Both men lost their lives in the sinking.

Leslie Williams was the 14th body to be recovered by the cable repair ship Mackay Bennett. Leslie was identified by his effects. He was wearing at the time, a blue serge suit, a red striped shirt, two scarves and a green overcoat. His effects included, two pocket books; two gold rings; a pair of silver cuff links; a ticket; papers; a pocketknife; $30 in gold; £3 10s and £2 6s 6d. in silver and copper coins. All his effects were returned to my mother who wanted Leslie to be brought back to Wales for burial. Unfortunately Leslie had been buried at sea on 22nd April 1912. His friend, David Bowen was never recovered. At the time of the sinking, Leslie and my mother had one son, also named Leslie, she gave birth to their second son, Harold in July 1912. My father, Dan Winter promised that if anything were to happen to Leslie he would look after my mother, which he did and they finally got married in 1914.

There is no single or standard format for a completed passenger list, as they vary in size, depending on the shipping line. They are either hand-written as is the case in the RMS Titanic or they are typed.  Information that can be obtained from them may include, the person’s name, where they called home, their age, occupation and marital status.