The Bullfinch is a very distinctive bird and is unlikely to be confused with any other. It has a stocky build with a stumpy black beak designed to peel seeds. The male has a reddish pink breast with a black cap and grey back; the female also has a black cap but her breast is pinkish grey and her back is grey-brown. Both sexes have a white rump, mostly clearly seen when flying away from you and, given the shy nature of this bird, this may well be the only view of a Bullfinch visiting your garden! They are a woodland bird and thus more likely to be found in gardens with nearby patches of trees or hedgerows. Between the 1950s and mid-1970s Bullfinches were far more abundant in southern Britain than they are today. Their fondness for flower buds of commercial orchard trees made them a serious pest in some areas resulting in them being controlled under licence; this had no significant impact on the population size. Orchard owners could sleep easily when there was a bumper Ash crop as this kept the birds in the woodlands and out of the orchards.The more recent decline of Bullfinch numbers, highlighted by BTO surveys, is thought to be linked to the loss of arable weeds and changing agricultural practices. 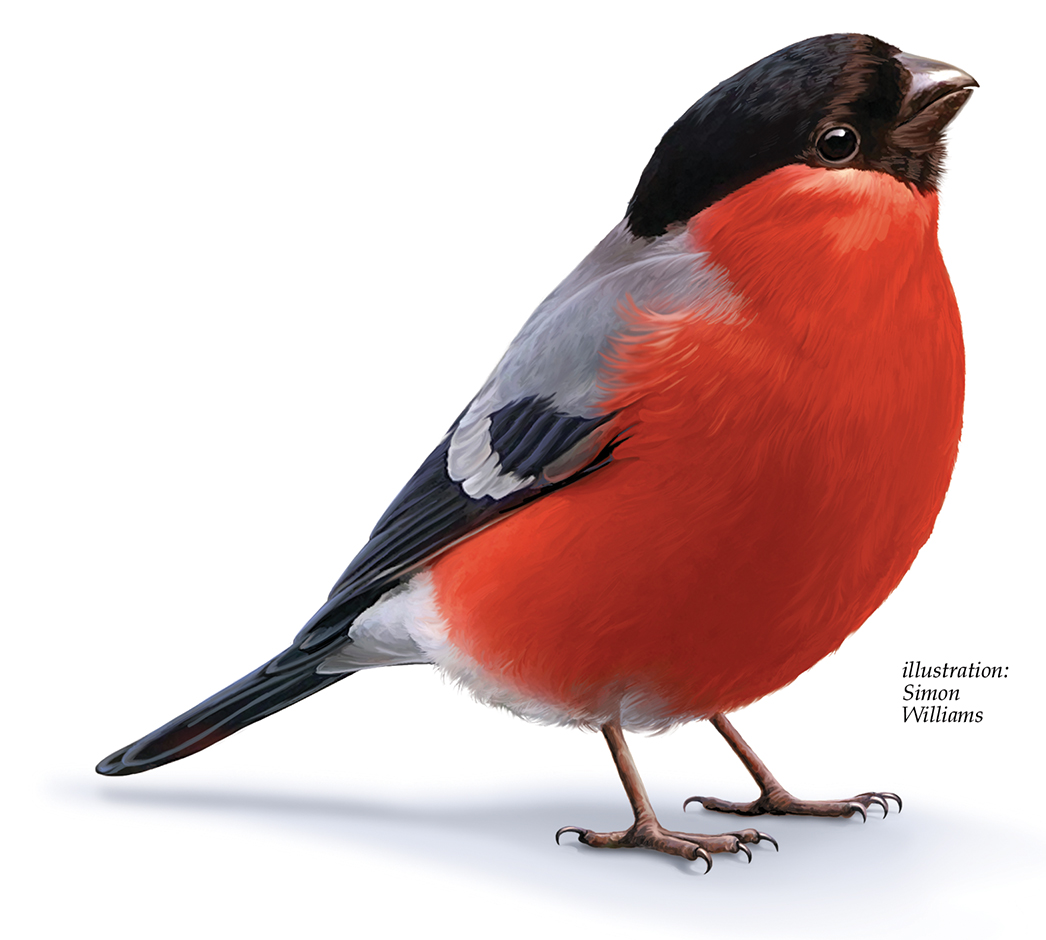 Did you know? The Bullfinch is the only finch to have a special food sac in the bottom of its mouth for storing food to take back to its young. The collective noun for Bullfinch is a ‘bellowing’. Bullfinches were once prized caged birds due to their good looks and ability to mimic tunes.The Welsh name is Coch y Berllan (literally red of the orchard).

How to attract them to your garden: Bullfinches are seed eaters and will readily take sunflower hearts from a feeder or bird table. Their natural diet includes the seeds of Ash, Elm and Common Nettle. During the breeding season (April to September) they will take insects to feed to their young but adults remain strict seed eaters.

Conservation status: AMBER in the UK, although only recently down graded from RED (unfortunately in Wales they are still on the RED list).      BTO Garden BirdWatch data show that Bullfinches are more likely to be seen in Welsh gardens than in English or Scottish ones. The maximum number I’ve seen in my garden at any one time was six – it was truly delightful to see three pairs at once.

Make Your Garden Count! If you enjoy watching birds and other creatures in your garden, and want to help track their fortunes, then BTO Garden BirdWatch could be perfect for you. Please contact me for a free enquiry pack or to book a talk (Swansea and surrounding areas).