KIM JONES IS A REGULAR CONTRIBUTOR FOR TheBAY ON CYCLE RIDES AROUND GOWER AND THE SWANSEA VALLEY, BUT THIS MONTH HE WRITES ABOUT HIS EXPERIENCES CYCLING IN MOROCCO EARLIER THIS YEAR – A JOURNEY THAT’S NOT FOR THE FAINT HEARTED 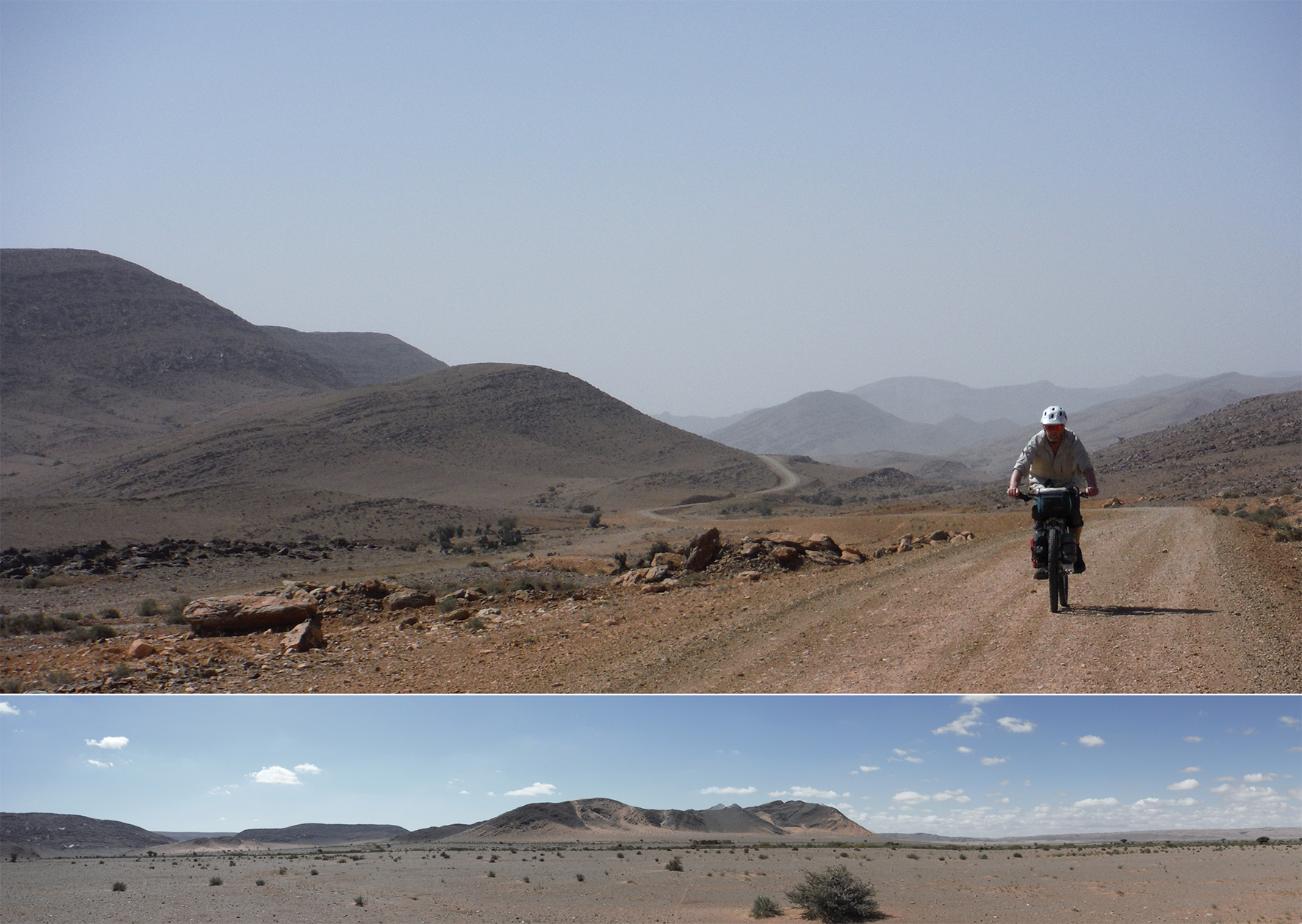 It’s not supposed to rain. I’m soaking wet as I precariously weave my way through the traffic towards the bus station. I can’t decide whether cycling in Moroccan cities is exciting or nerve racking, in Agadir though it’s just crazy. The lights change and we all come to a halt. It’s like the Wacky Races as we all wait, watching the countdown. Dick Dastardly in a taxi winks at me through the haze as the light changes to green. We’re off, inhaling copious amounts of exhaust fumes. I try to hold my line but am run off the road by a small pick-up truck with a horse in the back, I can almost hear Mutley sniggering.

I managed to make it to the bus station on time but the bus was late, very late. Yet when I finally got on board the bus clock said 09.55 so I guess that made it on time. The more I travel, the more accepting I become of this lackadaisical approach to schedules, in fact it’s a pleasant change from the choking legislation we have here in the UK. All sorts of weird and wonderful things were bundled onto the bus, including my loaded bike which raised some eyebrows, before we set off in a cloud of smoke. The journey down along the west coast offered some wonderful views of crashing Atlantic breakers before heading inland to a change of scenery and language. The road signs were now predominantly in Arabic and there was little, if any evidence of tourism – the dry dusty landscape seemingly unsuited for unaccompanied western tourists. Southern Morocco offers a different experience from the far more populated European-influenced north, and a visit to some of the more remote Berber villages feels like you’re stepping back in time. No tourist hot spots here, just life existing as it has done for years.

I’d arrived the night before and taken a taxi from the airport to the riad (a traditional Moroccan house) with the bike on the roof, and now 250km further south I’m sitting in a desert oasis drinking sweet mint tea with Brahim, the son of a Berber nomad. He mentioned Daesh and its apparent impact on tourism this far south, claiming Europeans, especially the British now very rarely visit.

I must admit it wasn’t a conversation I was comfortable with, but Brahim put me at ease and we went on to talk about Islam, the Koran and the different interpretations of it. The people of the desert are truly wonderful and generous. They will offer help in any way they can and will gladly provide you with food and shelter if needed, I guess this must stem from their nomadic genes and their appreciation of a traveller’s needs. I turned in quite late that night with a full belly having feasted on camel tajine and had planned on an early start as I still needed petrol for the stove. Despite my best efforts the previous day I’d been unable to buy it from a garage as apparently it is illegal to sell petrol in Morocco unless you are with your vehicle. I had mentioned this to Brahim and in the morning he presented me with a plastic water bottle full of the stuff. I dispensed what I needed and headed off into the desert armed with fresh oranges (the best I’ve ever tasted) some bread and avocados.

Desert heat is a dry heat, a heat that saps all the moisture from your body, a heat that fuels a thirst. I drank every 20 minutes regardless of the distance travelled and apart from the odd exception managed to stay reasonably hydrated throughout the trip. Knowing when to start your day is easy – as soon as it becomes light. The dilemma occurs around mid-day when arguably the sun is at its hottest; resting at this time seems sensible but to do so means battling with the dry desert winds later in the afternoon. After riding for 25km into a vicious headwind the first day, I settled into a daily routine of early starts and tried to be off the bike by three o’clock, thus avoiding the worst of the winds. Of course this wasn’t always possible but it was a routine that worked the majority of days.

That next day as I approached a small village feeling absolutely exhausted and rather thirsty I had my mind settled on a night in the tent, but was persuaded by a group of children who ran out to greet me to go with them. Feeling a little like the pied piper I followed them into a tiny oasis and was greeted by Hassan who welcomed me into his family home, offering me some sweet mint tea. Tea is served in small glasses but is not drunk until a ritual that seems to occur throughout the Sahara is performed. The glasses are laid out on a tray and lumps of sugar are added to the tea pot. Tea is then poured into one of the glasses, this is left for a while before being tipped back into the pot. Once again the glass is filled but this time, instead of being poured back into the pot, it is poured into another glass, then from one to another, each time the bottom of the glass being wiped with a tissue. The tea is transferred several times until all the glasses have a small amount of froth in the bottom, only then is it extravagantly poured from a height. The purpose of this, is that the froth gathers the tea leaves in the bottom of the glass thus dispensing with the need for a strainer. 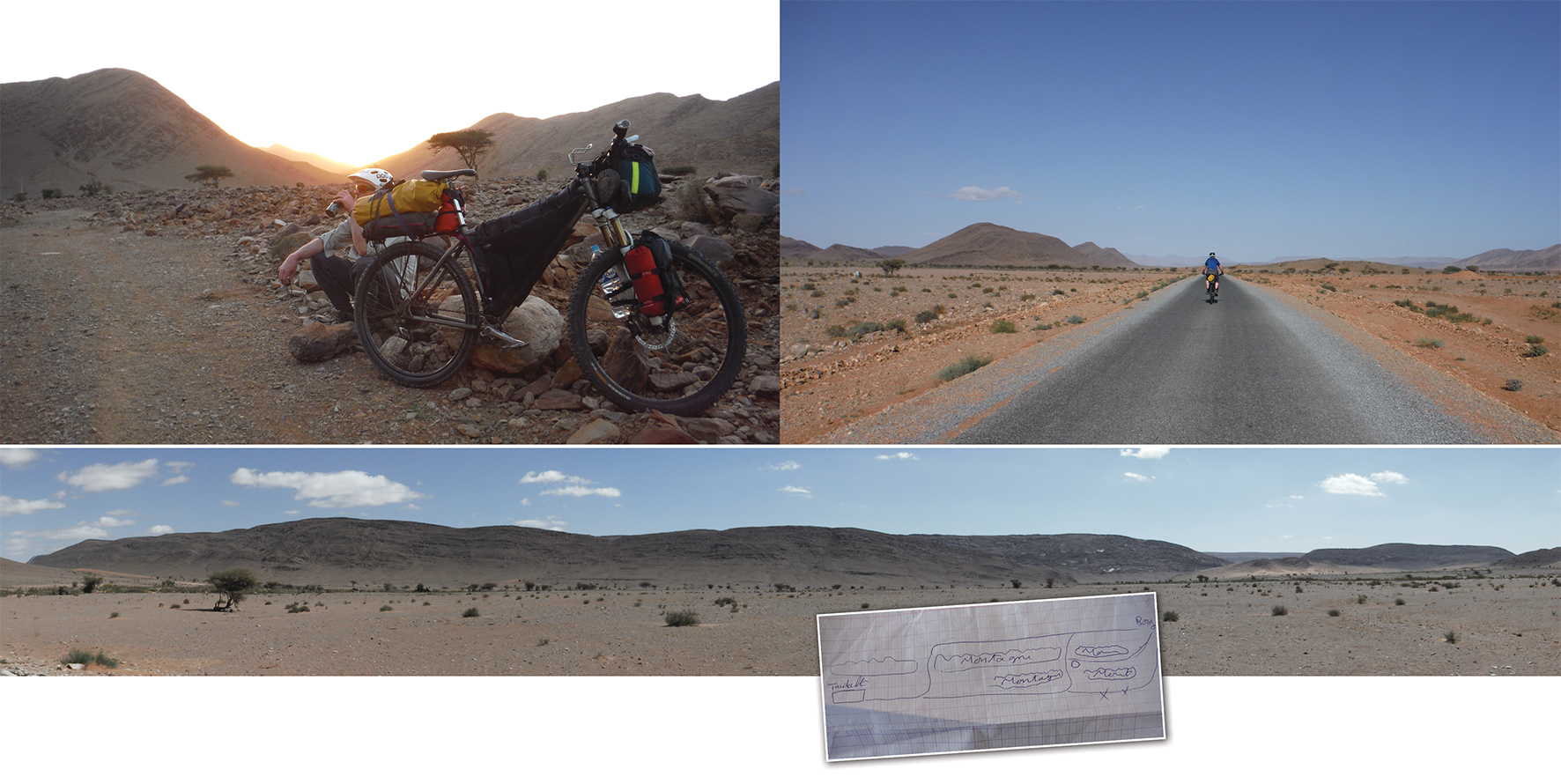 Hassan spoke both Arabic and French, but the only French I had was what I could remember from my school days so our conversation was limited, nevertheless I was invited to stay the night with him and his family. That evening entertained by his youngest daughter the lovely Leyla (right), who spent a lot of her time poking out her tongue at me and laughing, I explained the best I could my plans for the next few days. Hassan shook his head and suggested a different route, one that would apparently pop me out in the next village. Of course none of the tracks were on the map I had, so I was given a roughly drawn one on a scrap of paper (above). That night I slept on the floor of their tent wrapped in a heavy blanket which kept out the cold, and the following morning again stocked with oranges, avocados and warm fresh bread was waved off by the family. I nervously pedalled out of the village feeling a certain sense of trepidation, though I had complete faith in both Hassan and his map it somehow didn’t feel quite right being in the desert with just a bike armed only with a scrap of paper. However I soon got a feel for it and after 20km without seeing a soul I popped out as promised in the next village where I stopped only to fill my bottles from the well before continuing into the cool of the evening. 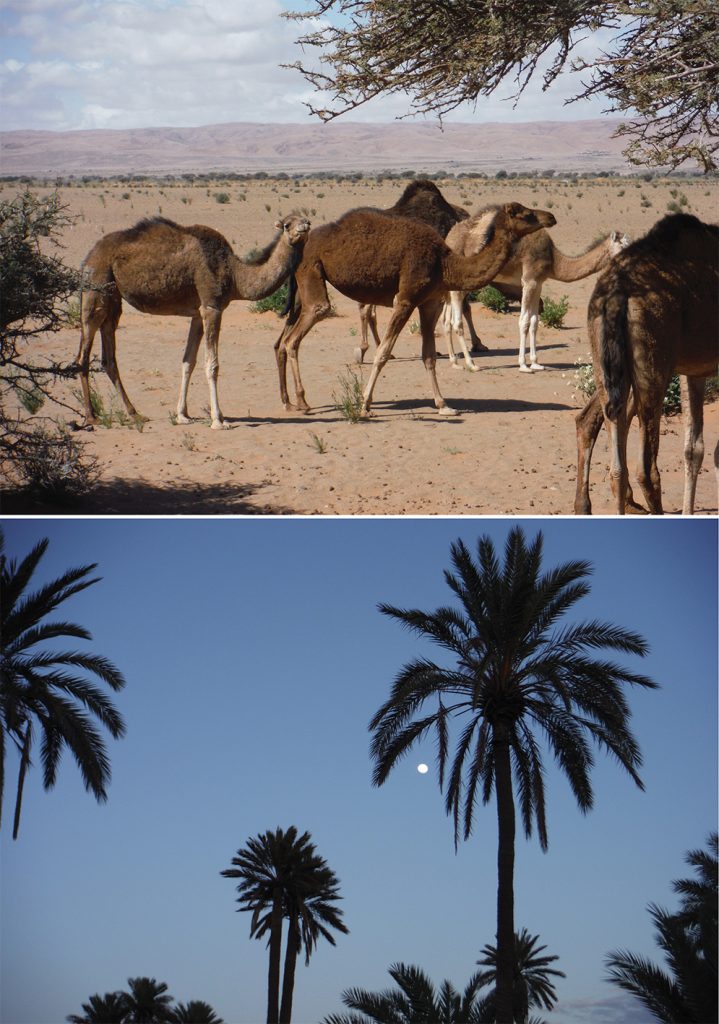 I rode into Aouinet Lhana 3 days later, visions of Lawrence of Arabia in my mind with plans to mobilise the people of the village. In preparation for this I straightened my shirt, tucked myself in and tightened my belt; however in doing so it was clear that the last 3 days had taken their toll – I was covered in dust and avocado stains and was badly in need of a shave. Looking more like a desert hobo than a desert prince I abandoned my plans and instead settled for some biscuits and 5 litres of water. Heading north I left the people of Aouinet in peace blissfully unaware of their lucky escape. That night I camped in a beautiful open valley falling asleep as soon as I zipped up the tent only to wake later with a start; someone (or so I thought) was shining a light into the tent. I got up and looked outside. Never have I seen a moon so bright, the valley floor alight with her luminescence, the few stunted trees casting long shadows over the dry river bed. A desert sky really is a sight to behold. I crawled back into my bag with a feeling of deep contentment and a big smile on my face.

I needed a wash, but everything was dry – it hadn’t rained that far south for over a year and I was intent on finding a well, as my own supply of water was too precious to waste. I came across a concrete bunker built to gather the water when it rains. Opening the cover I peered into the gloom, there, some 4 metres below was indeed water, a light shade of green in colour with several dead frogs floating in it. Now needs must and all that, I climbed down and feeling rather anxious nervously filled up my bottle before beating a hasty retreat back up the ladder. Holding the bottle to the sun, it didn’t look too bad, there were only a few tiny undistinguishable bugs floating in it, so after unpacking my faithful Sawyer water filter I took several large gulps. Venturing down once more I refilled the bottle, this time to bathe with. It felt good to rinse away the dust and grit from my aching body. Later, riding away on a washboard ridged dirt road that almost rattled the fillings from my mouth, kidding myself I no longer smelt like one of the camels I’d come across earlier in the day, I was a happy biker. 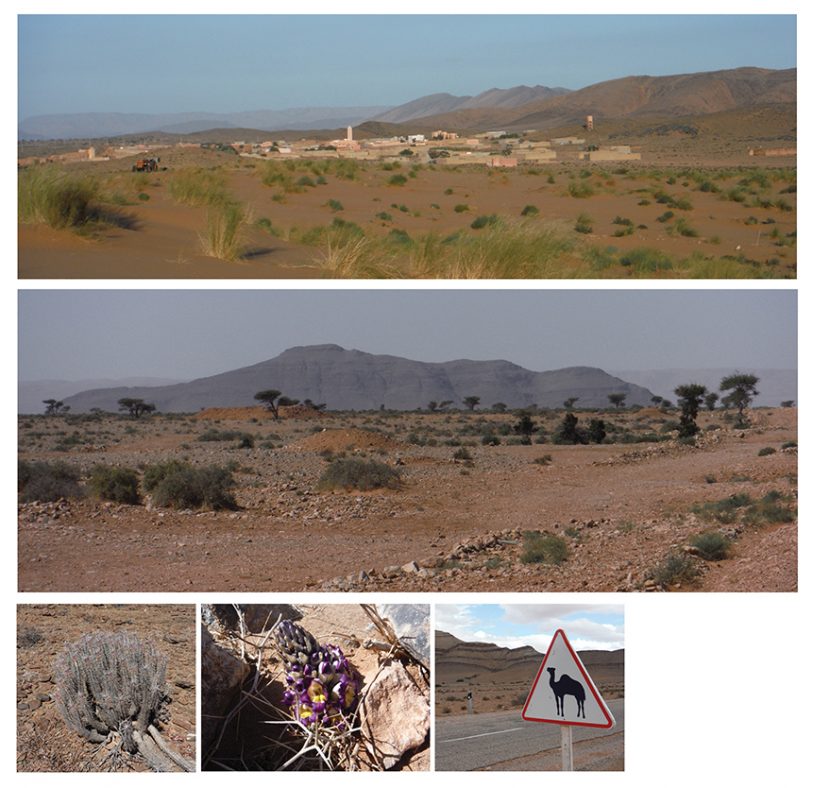 There were many highlights to this trip including a lazy afternoon spent at an oasis. Being shown a whale bone and shark’s jaw that were found in the Sahara (for this desert was once under water) by a Berber nomad….A night in the open-air sitting around a fire listening to Rashid as he spoke eloquently about life in the desert….Bamal and I laughing together at my pronunciations, as he taught me various Arabic phrases….The sheer feeling of emptiness of the desert and the friendliness of the people….But the one that stands out most, is a meeting that occurred towards the end of my trip. I’d been riding since first light finally comfortable with a loaded bike, spinning along on a dirt road having not seen anybody all day when in the distance I saw a land rover hurtling towards me. After a few minutes it stopped alongside and two men came over and greeted me with ‘Salaam aleikum’ before shaking my hand. I exchanged the greeting ‘Aleikum salaam’, then, shaking my hand once again, they returned to their vehicle and drove off with a wave. I was left baffled, bewildered, shaking my head, where else in the world……? Welcome to Morocco!

Thanks to Lawrence at Urban Cyclery, Swansea for his help.