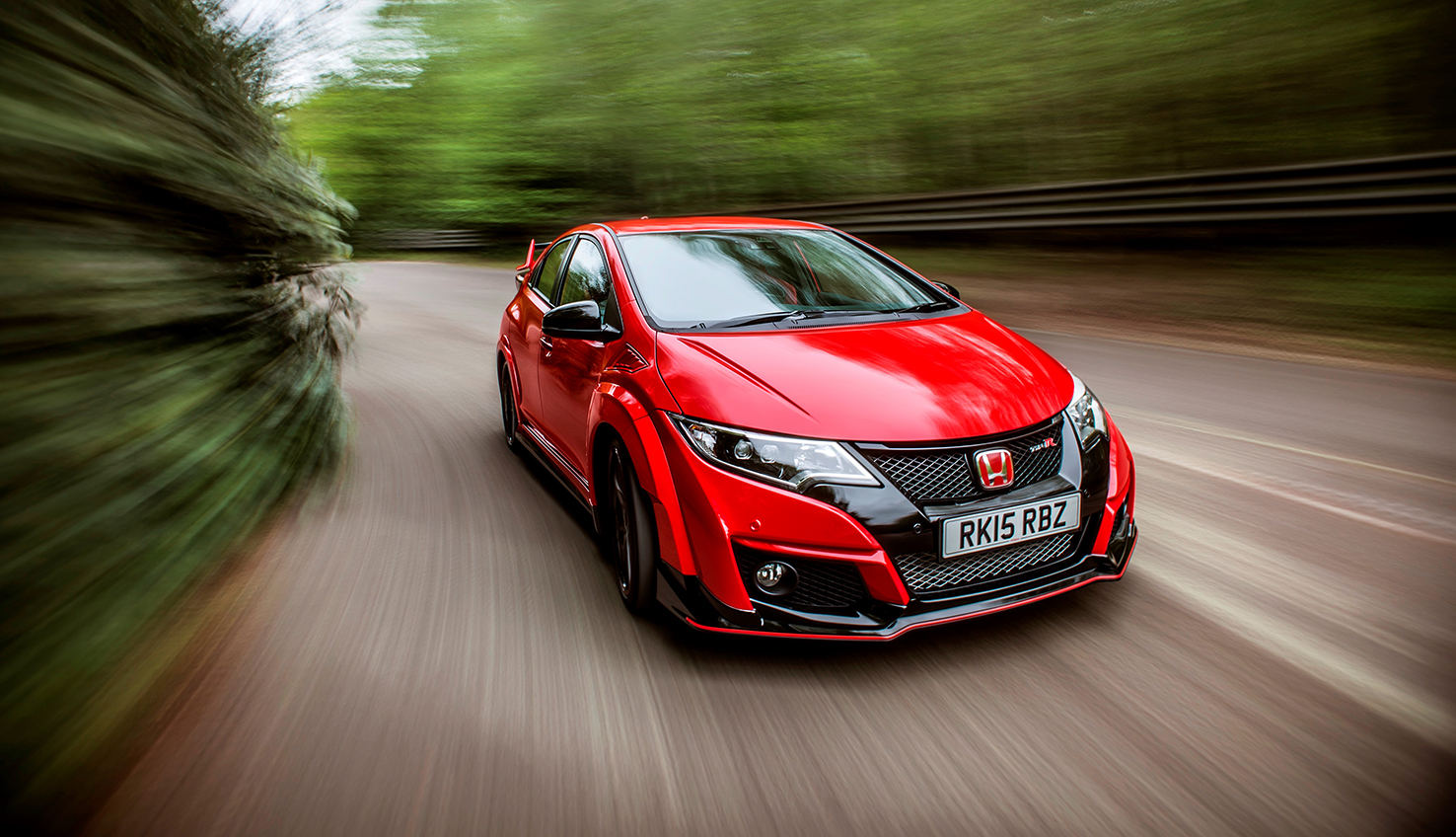 It’s the looks you notice first, the lingering glances, the incredulous stares, the double-takes, the astonished gawps. Funny, when I drove a lurid green McLaren along the promenade at Brighton no-one batted an eye-lid. Drive the new Honda Civic Type R GT through a sleepy Shropshire market town on a windy Wednesday afternoon though? That’s a whole different kettle of fish.

Once inside the Civic Type R in what little there is of the evening traffic it’s relatively easy to forget quite what all the fuss is about. You do sit 20mm lower in the Type R than you do in a standard Civic, held in place by a deeply sculpted bucket seat that requires you to have the hips of a racing snake in order to be completely comfortable. The familiar Civic split-level dashboard faces you, the rev-counter dead-ahead. The only hints that things are different are seatbelts that are red instead of black; a somewhat garish but very comfy thicker-rimmed red and black wheel that hints at heavier and faster acting steering; an alloy gear-knob that falls easily to hand but seems always cold to the touch; a red button marked Type R where usually the green Eco one would be. You could, almost, be forgiven for thinking you were driving your mum’s 5 door Civic, albeit with a blowy exhaust. You can’t see any of the exterior of the Civic Type R from its driver’s seat. You can’t see the digital speedo either.

The bystanders though, they can see the Type R’s bodywork; it certainly does draw attention. It splits opinion too. If huge rear wings, massive diffusers, almost snowplough-like front splitters, tacked-on aluminium wheel-arch extensions, quadruple exhausts, blacked-out rear windows and multi-spoke alloys shod with 235/35 ZR19s are your kind of thing you’ll  love it. Alternatively, if you’re of the opinion that that’s all a bit late 90s, all a bit Max Power, then perhaps you’d prefer the subtlety of the similarly priced (approx. £33K) VW Golf R instead. You’ll get a rear-wiper on the Golf too, and a third rear seatbelt; the Type R rather annoyingly goes without both.

What can’t be argued about it is just how quick the Type R is: 0.62 in 5.7 seconds, 167mph (where allowed) flat-out and 306bhp speak for themselves. 22 years ago when Honda first introduced its cars with the Red H badge, it was nearly the stuff of super-cars. The Type R grips like a barnacle to a boat hull too. All those aerodynamic add-ons, its limited slip-diff and its adaptive dampers allow it to corner at speeds far higher than you first imagined. It feels faster still if you press that Type R button, but be prepared. That little red switch stiffens the already taut dampers by another 30% which makes for a filling-loosening ride, it also turns the dials red and gives the throttle a hair-trigger response – it’s best left for track days to be honest. The Type R’s industrial Hoover soundtrack becomes tiresome after a while as well. The Brembo brakes on the other hand are simply superb, whatever the conditions.

And yet when you’re not in the mood for a B-road blast the Type R can also perform all the other duties a good hot-hatch should. The boot’s a decent size, there’s room in the back for two adults, the rear seats fold flat and the new turbo-charged 2.0 litre engine (a first for a Type R) is happy to cruise all day at low revs in high gears. Honda even say that it’ll do 38.7mpg on the combined cycle. Honestly it’s not as intimidating as it looks.

Ah yes, those looks. If you can live with them – by which I mean both that of the car and the ones you’ll get when you’re in it – there’s a lot a to like about the Civic Type R. Shrinking violets on the other hand need not apply.