LIZ BARRY HAS BEEN ON HER TRAVELS AGAIN, ALTHOUGH NOT TOO FAR THIS TIME.

THE COTSWOLDS ARE ONLY A COUPLE OF HOURS DRIVE AWAY, AND MAKE THE PERFECT DESTINATION FOR A WEEKEND BREAK

All photographs by Liz 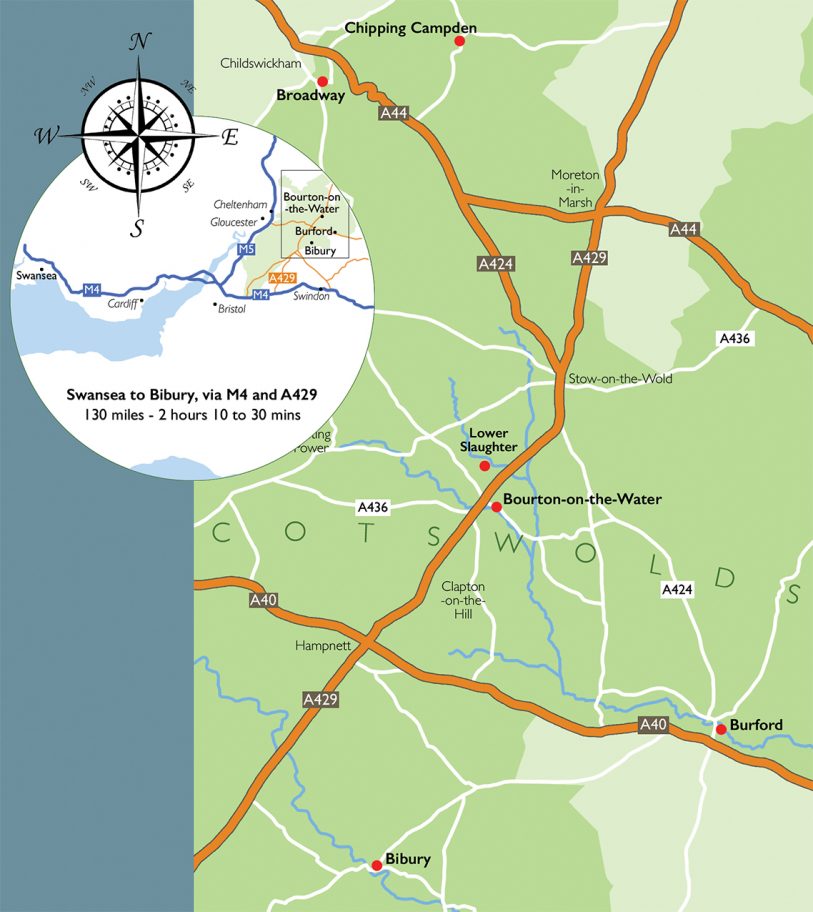 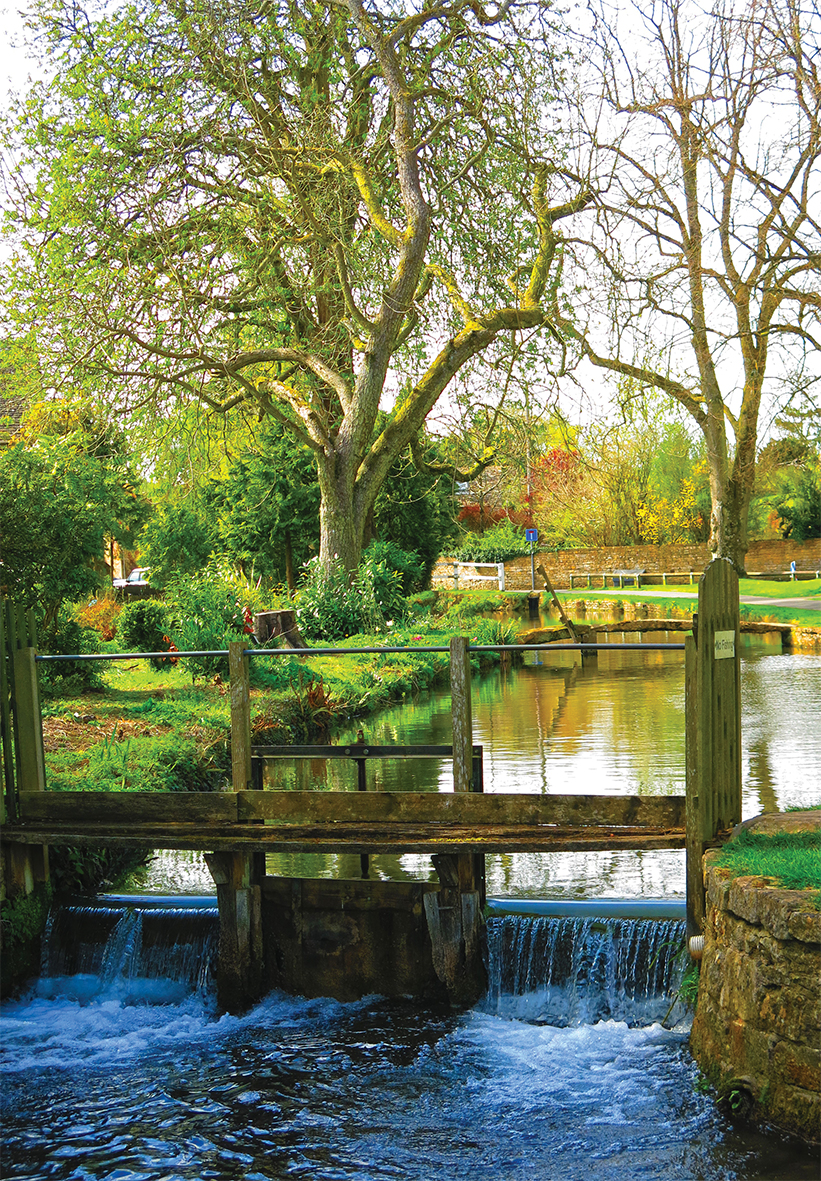 Spring is a great time to visit the Cotswolds, with its enchanting chocolate-box villages and buildings of honey coloured stone. You’ll find thatched roof cottages in hamlets surrounded by green rolling hills or ‘wolds’, and fields of flower meadow and woodlands edged with Cotswold dry-stone walls. With over 3000 miles of public footpaths, it’s the perfect place for walkers.

As well as the countryside, there are historic market towns that attract many thousands of visitors every year. The town of Burford over-looks the Windrush Valley. Since Tudor times, the half-timbered houses and cottages have stood on the broad street that runs down to the edge of the town and the river Windrush.

Just over 20 miles away the limestone buildings dating back to the 16th Century and even earlier, line the wide street and village green of Broadway. Here you’ll find several galleries, delicatessens and an eclectic mix of shops – a row of red chestnut trees border one of the longest High Streets in England. 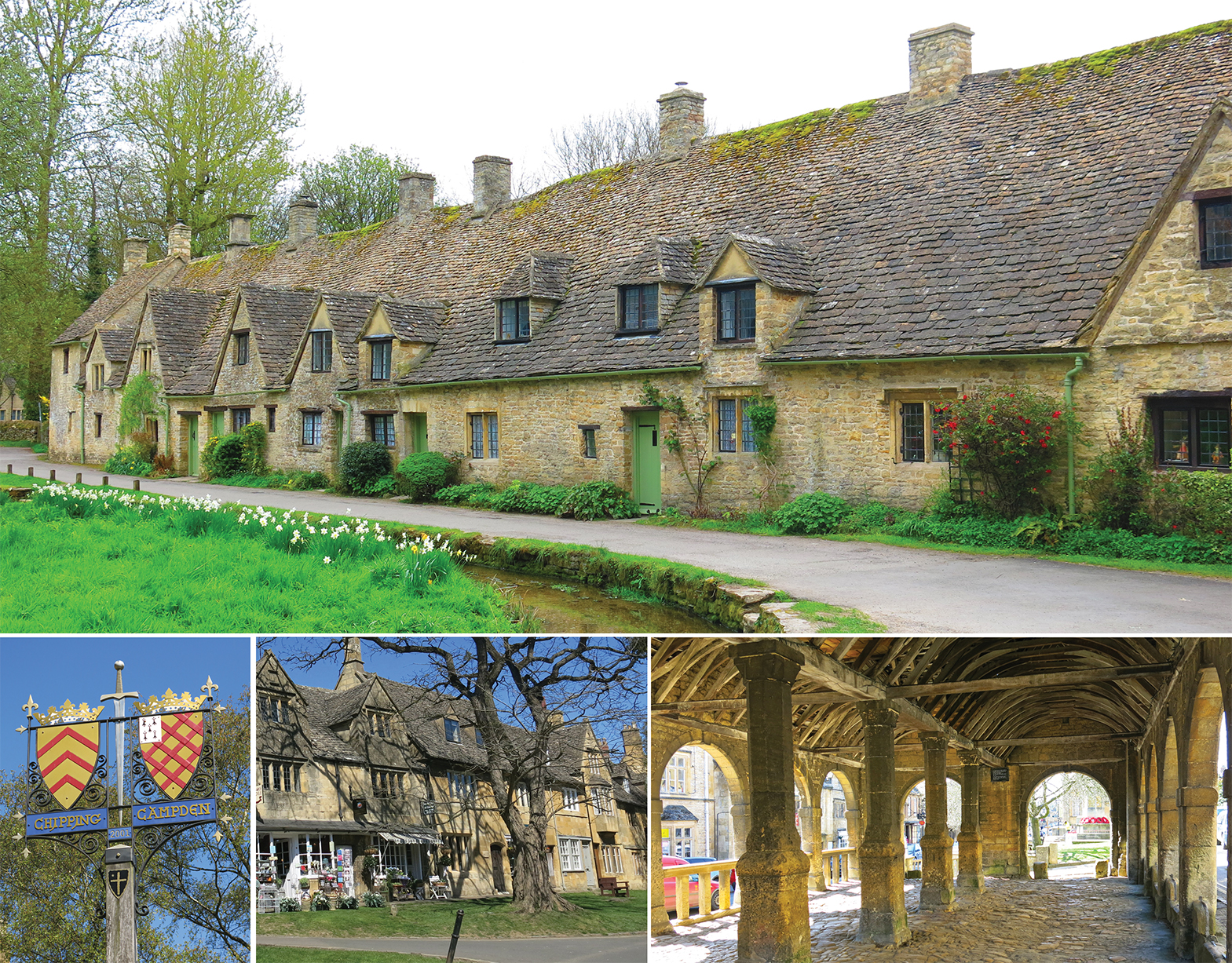 A further drive of about 40 minutes brings you to Bibury, once described by William Morris as ‘the most beautiful village in the Cotswolds’, and recognised by many as the backdrop for television programmes and films including Bridget Jones’ Diary. Linked together like a daisy chain, Arlington Row cottages date back to 1380. At that time they were used as a monastic wool store, then later during the 17th century were converted into weaver’s cottages. Beneath the sloping tiled roofs, squeezed above green painted front doors, squared glass window panes look out onto a water meadow.

During the Middle Ages the Cotswolds was held in high regard throughout Europe for the wool produced in the region. The abbeys and monasteries raised large flocks of a breed known as the Cotswold Lion, a native sheep with a fleece of warm gold tones; quite a large animal that thrived in the natural habitat. The fine homes and the wool churches that stand today were built from the riches amassed by the merchants; examples of these can be seen in the architecture of Chipping Camden, an important wool trading town during medieval times.

The afternoon sunlight highlights the honey coloured hues of the buildings that run along the elegant terraced high street. At its centre stands the ancient arched Market Hall built in 1627, giving shelter to vendors who sell produce and poultry, not wool as you would assume. Towards the north end of town stands the church of St James, built with funds from the wool merchants, full of charac-ter with beautiful stained glass windows. Definitely worth a peek inside.

Bourton on the Water (above)

Just a short drive away along winding country lanes, past hedgerows bursting with clusters of white blossoms is Bourton on the Water where I stayed in a cosy B&B, a central base for visiting the surrounding area. It is also known as the Venice of the Cotswolds, because of the many attractive low arched stone bridges that cross over the river which flows gently through its centre.

I watched fluffy feathered bundles of quacking ducklings splashing away, under the watchful eye of their protective mothers who stood on the grassy bank. It is one of the most popular tourist spots and has many cafes and gift shops as well as other attractions, a model village, Birdland and the Cotswold Motoring Museum.

On the outskirts of Bourton on the Water, a path leads through the countryside past paddocks of horses for about a mile and a half to the charming village of Lower Slaughter (above). Its name does not have a sinister connotation – the term comes from the Old English name for a wetland or slough – a muddy place.

These are only a few of the towns and villages that can be found in the Cotswolds, and there are many more to discover. Designated as an Area of Outstanding Natural Beauty, it is a delight to explore – not just in spring but throughout the year.