Publishing schedules being what they are I’m writing this at the very start of the motor-sport season; by the time you read this it’ll be well and truly under way. We’ll know if Formula 1’s new controversial qualifying system has made it past the first race, whether or not Fernando Alonso is ok after that almighty crash in Melbourne, and Monaco, the Isle of Mann TT and Le Mans will be on our minds. Well, they’ll be on mine.

Alas my budget doesn’t stretch to a ticket to the principality with the marble pavements, and private yachts, champagne and casinos aren’t really my thing either to be honest. Nevertheless, I did manage to indulge myself in a little racing on the first official weekend of spring. The fact that it coincided with my time with Audi’s all-new R8 V10 Plus was somewhat of an added bonus. 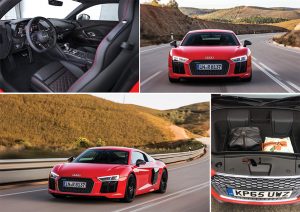 On more than one occasion (and by far greater and well-respected motor-noters than me) the Audi R8 has been described as the “useable” or “everyday” supercar. And, I suppose if you can live with just two seats, and a claimed 23mpg – if you drive it carefully that is – it might just be. What better way to find out then, than a 400 mile round-trip from my place in The Welsh Marches to the West Sussex petrol-head’s paradise that is Goodwood, for their season opener: The 74th Member’s Meeting.

There’s just enough room for two overnight bags and a couple of carefully folded coats in the R8’s trunk that hides beneath what we’d usually call its bonnet. Walking boots, hats, gloves, extra jumpers (I’m sure it’s the same for Monaco) camera gear and the all-important tickets can all be stored, if packed carefully, on the handy shelf behind the seats – it forms part of the bulkhead and separates occupants from the engine.

And what an engine it is. In Plus spec, as per the one fitted to the R8 Audi kindly loaned to me, the 5.2 litre V10 that sits right behind you and amidships produces 602 bhp. That’s about the same as racing engines in the group 5 Porsche 917s and Ferrari 512s that I had driven so far, and to which the R8 owes much of its existence (VW owns Porsche, Audi and Lamborghini these days and the R8 shares its engine and the majority of its oily bits with the Italian Gallardo). As a result the four wheel-drive R8 blasts to 60 in just 3.2 seconds and will top 200mph – if you’ve a racetrack at your disposal that is. It’s one mightily rapid car.

And yet you don’t need the skills of a racing driver to enjoy it. On start-up it might make the kind of noises that make your neighbours three-doors-down question if they’ll ever need another alarm clock again. With the Drive Select mode switched to Dynamic and the active exhaust system set to Sport, it barks and pops with every down-shift the 7-speed automatic gearbox makes, as the near dustbin-lid sized carbon-ceramic brakes scrub off speed.

As your confidence increases, you quickly adjust to just how capable, and yet composed the R8 is. But, it’s also incredibly smooth. It’s easy to just pootle the R8 along in morning traffic. The steering is light, the ride quality well-judged and the visibility, whilst going forwards at least, as good as that of many a hatchback – albeit a somewhat low-slung one.

Once you’re inside, despite what the R8’s exterior looks might suggest, and what the onlookers and double-takers might think, the R8 feels surprisingly normal.

Perhaps that’s because the R8 shares most of its interior with Audi’s other sleek coupe, the TT. Usually, that would be in no way such a bad thing, however, in this case it’s where one of my few criticisms of the R8 is aimed. As usual it’s been built to the same near bomb-proof Audi tolerances but, it’s all a bit too familiar. The R8 gets the same TT dashboard, the same aluminium heater knobs, the same flat-bottomed steering wheel and even the same VW Golf sourced indicator and wiper stalks. In the circa £45,000 TT this interior feels very special, whereas in the £135,000+ before options R8, it makes Audi’s flagship feel…, well…, like the TT. It is remarkably comfortable though, for hour after hour. 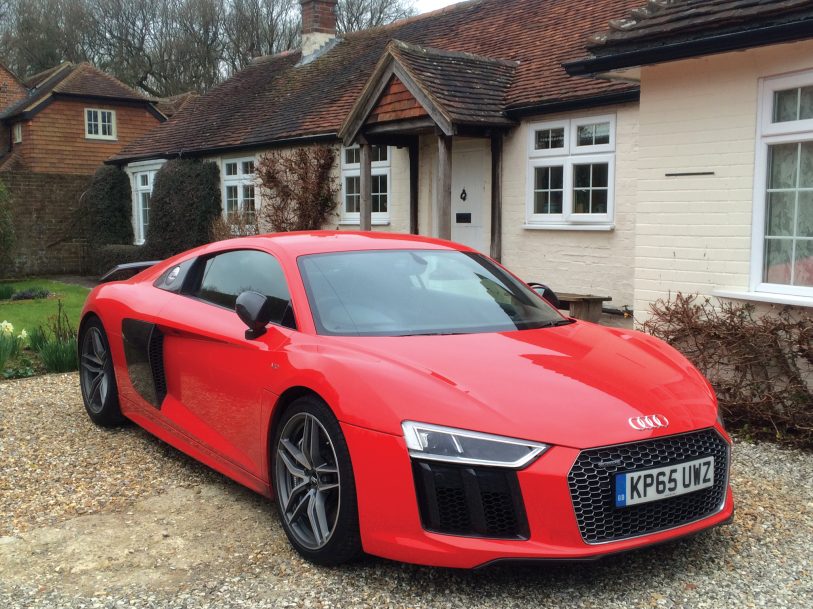 The A49 became the A417. The M5 through Gloucestershire became the A419 through Wilt-shire. The M4 became the A34 at Newbury before turning into the A272 at Winchester. Then, a left turn in Petersfield (and an inevitable fuel stop) lead on to the wonderfully sinuous B2146 and B2141 – my fav-ourite roads, both of which cut diagonally across the South Downs and make the 180 miles or so before-hand all worth-while. The R8 took things ever more in its stride. It’s blisteringly quick when required to be so, and yet it’s as refined as a GT-like cruiser when you simply want to sit back and soak up the miles.

After what turned out to be yet another unforgettable weekend in West Sussex, thanks to the super-comfy and beautifully appointed B&B that is Stag Cottage: the exact location of which I’d rather like to keep a secret due to it now being a favourite hideaway (It’s in Balls Cross, 4 miles East of Petworth – Ed!), the 200 Sunday afternoon miles back to Shropshire from the 74th Members Meeting gave me time to think.

Is the new R8 as challenging or as rewarding as a true supercar should be?

The R8’s day-to-day usability and its effortless refinement left me questioning: Does it lack that certain indefinable something that separates the best from the rest? There’s no brutality. There’s not the precision of a Porsche, or the finesse of a Ferrari. It doesn’t scare you or make you tingle all over like a true supercar should. It’s as if somehow, it’s almost too easy to live with.

In 40 years’ time, and as good as the R8 is, I’m not sure if it will ever be as revered in the same way as the Le Mans legends, the Grand Prix greats and the all-time classic cars that I went to see at Goodwood.

I’m afraid I can’t offer you a drive, or even a ride in the R8. Sadly I had to return it. But, TheBAY is offering you the chance to see all of the latest supercars, the legendary Le Mans cars, the latest Formula 1 cars, WRC rally cars old and new, and the drivers who made them all famous. Plus much, much more. See here www.theswanseabay.co.uk/2016/03/30/goodwood-festival-speed/  for your chance to win tickets to the 2016 Goodwood Moving Motorshow and The Goodwood Festival of Speed.

Special thanks to Mags and Ian at Stag Cottage.