IF CAMPING UNDER CANVAS FILLS YOU WITH DREAD, THEN THINK ABOUT GLAMPING – CAMPING BUT WITH A LITTLE BIT OF ADDED LUXURY. LIZ BARRY HEADED TO NORTH WALES TO SEE IF IT WAS AS GLAMOROUS AS IT WAS MADE OUT TO BE. 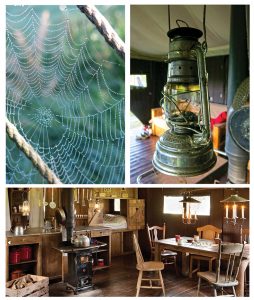 The beauty of glamping at Feather Down is that you don’t have to erect your own tent; there are no air beds or sleeping bags and best of all it has its own flushing toilet so there’s no fumbling in the dark for your torch and wellies in the middle of the night.

On walking into the large canvas tent we were surprised just how spacious it was. The main room was furnished with a dining table and chairs, a sofa with soft cushions…the place to cwtch with a book, two bedrooms and a cute cupboard bed. There was enough room to accommodate a family of six . A black stove stood at the heart of the well-stocked kitchen, alongside in its own little hut, was a gas powered shower just a stone’s throw from the hot tub – well this is glamping after all. 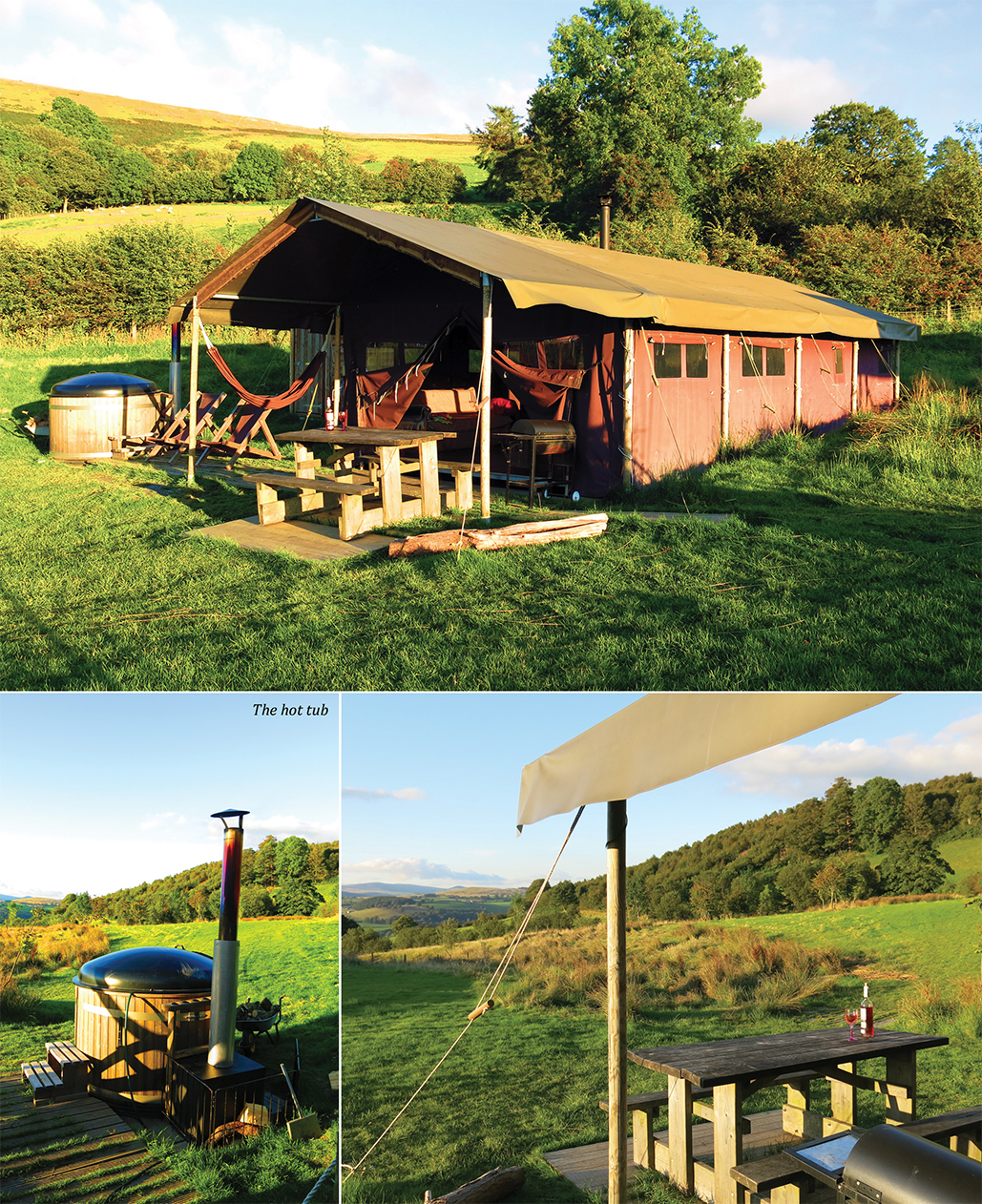 The site of Feather Down Camping overlooks the deep blue glassy waters of Bala Lake, also known as Llyn Tegid; it’s the largest lake in Wales. The Snowdonia peaks of Yr Afan and Arenig Fawr provide the backdrop to this charming, rural idyll.

Owners, Geraint and Llinos Jones along with their daughter Martha bought the farm in 2007, although a family thread connects them to the land as Llinos’ grandfather was born here more than a century ago. On our arrival, we were greeted by Ben, the black and white collie along with Llinos and a brood of russet brown hens who followed her around in a scene reminiscent of the Pied Piper of Hamlin.

A wheel-barrow was on hand to transport our belongings across the field; once emptied there was another load to collect, this time of logs to heat the water for the hot tub. Since this would take about 3 hours, we had time for supper first. While waiting for our meal to cook all there was left to do was pour a couple of glasses of wine and sit on the veranda and enjoy the view across the lake in this little piece of heaven in the Welsh countryside.

After a good night’s sleep under a fluffy quilt, I pulled back the tent flaps to find a blanket of white cloud suspended over the valley below. After a breakfast of deeply yellow scrambled eggs courtesy of the resident chooks, we were set up for the day and ready to join Llinos for a tour of the 180 acre farm. Due to its mountainous location, the farm operates without a lot of heavy machinery, making it a safe place for a family holiday as children have total freedom to explore. We walked across fields planted with swede, which provides food for their herd of over 300 hardy Welsh mountain ewes. The higher we climbed the more spectacular the views became, the waters of the lake reflected the surrounding green hills while in the distance, the roof tops of Bala resembled a miniature village.

Bala is a small market town with a variety of cafes and restaurants along with galleries and shops selling local crafts. None of these were of any interest to my partner Gareth. He was far more interested in finding Stori, an independent beer and wine shop that stocks an extensive range of Welsh beers. 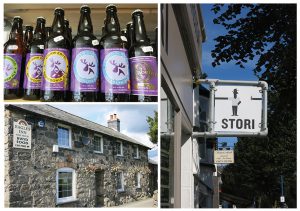 Four miles south of Bala in the village of Llanuwchllyn is the Eagle Inn. This stone building began life as a farmhouse, with its low beams, wooden benches and an inglenook fire, it’s a cosy place for a drink. Though don’t be surprised if when you order a pint that you are asked if you want semi or whole as it could so easily be milk you want to buy. This is not your regular public house, this one doubles up as a shop. Jake, the barman explained that when the village shop closed, the pub took over the role of providing for the local community. From seven in the morning the tables are laden with fresh bread, seasonal local produce and newspapers. With a fridge behind the bar for dairy goods and shelves of dried foodstuffs, villagers and visitors are well catered for.

As it was as a lovely sunny afternoon we went to sit beside the lake, where groups of children learnt the craft of canoeing before taking to the open water. Water sports and other outdoor activities such as gorge walking and raft building can be arranged through the Bala Adventure and Watersports Centre on the lake shore.

From a distance came the shrill whistle of a train approaching, clouds of steam billowing skywards. Alice, a red locomotive appeared, pulling carriages filled with passengers, on the nine mile return journey between Llanuwchllyn and Bala.

Back at camp, we met up with Geraint who was hard at work fuelling up the wood fired pizza oven in readiness for the night’s dinner. Martha was helping her mother put toppings on the freshly made dough bases, before placing them on a peel (a shovel-like tool) and sliding them into the hot oven. The aroma of smoky wood, whetted our appetites as we chatted with the family and dined al fresco together.

Swapping the hustle and bustle of daily life for a weekend outdoors had been perfect, I could definitely get used to Glamping, as Feather Down had done all the hard work and the Jones family had made us feel so welcome on their farm.

You can find Feather Down Farms throughout the UK and abroad