Rarely more than a centimetre in length, yet with exquisitely intricate patterns and often rich and beautiful colours, plant bugs (family Miridae) are living proof that the best things do, indeed, come in the smallest packages 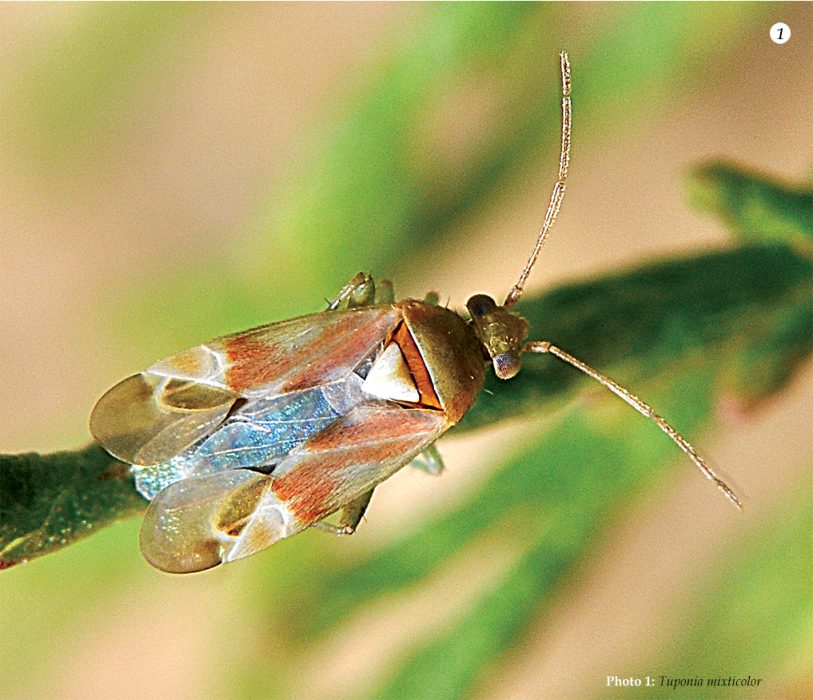 Like their larger and more familiar cousins the shield bugs, plant bugs belong to the order Hemiptera (the True Bugs) and as such possess the hollow needle-like sucking mouthparts characteristic of the order. Most plant bugs have wings and display the typical hemipteran wing arrangement, namely a pair of semi-leathery forewings with membranous tips (from which the order derives its name) and a pair of membranous hindwings. The diminutive (2.5 mm) Tuponia mixticolor in photo 1 is just starting to open its forewings in preparation for take-off, giving us a glimpse of the fragile, folded-up hindwings between them. Both the fully expanded wings as well as the mouthparts are illustrated by the somewhat larger (7mm) Grypocoris stysi pictured in photo 2, just taking off from its bramble flower. 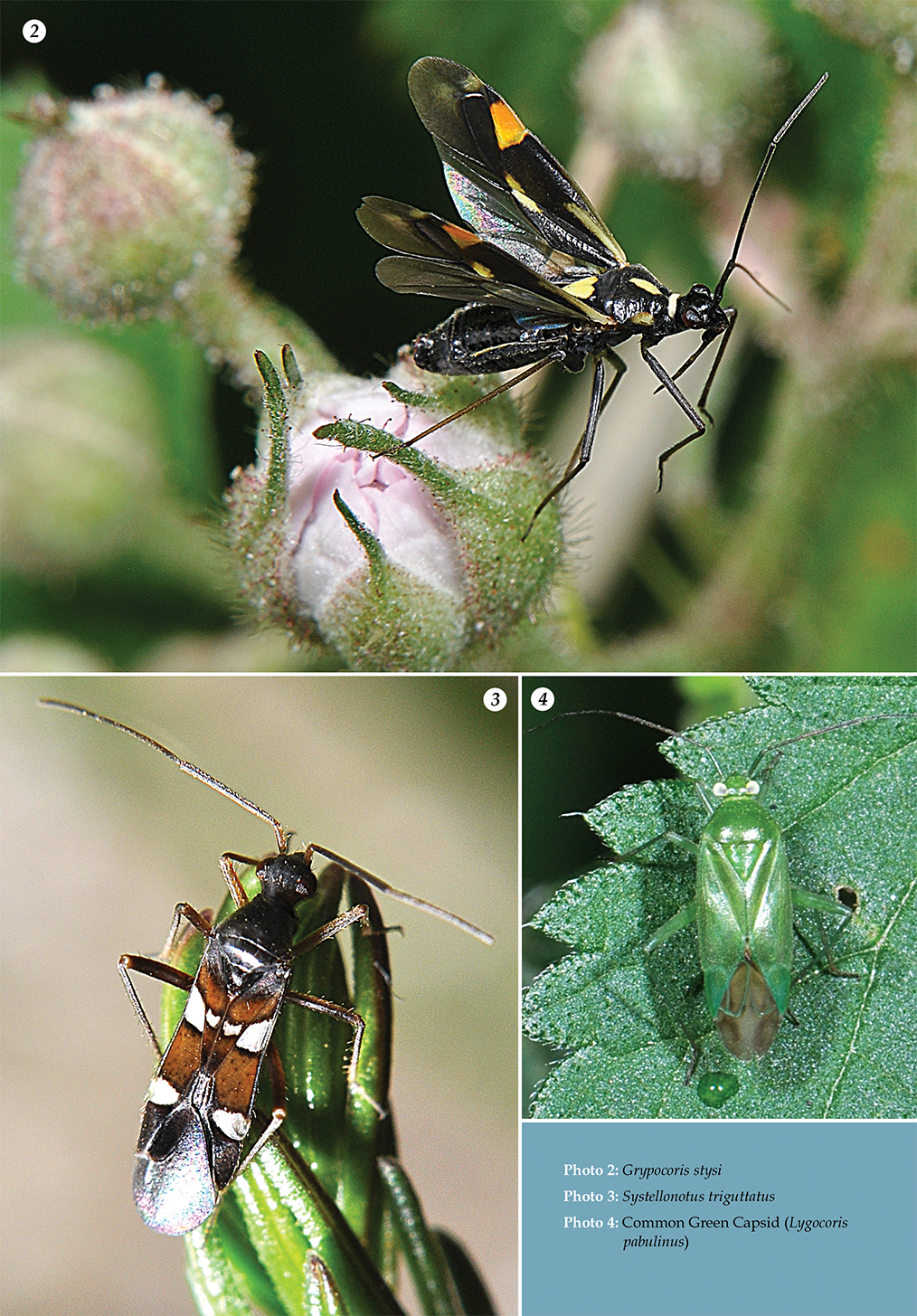 There are 229 plant bug species in Britain, but due to their small size they are frequently overlooked. Some species, such as the minuscule Tuponia mentioned above or the slightly bigger, elegantly patterned Systellonotus triguttatus (photo 3) which reaches a maximum size of 4.5 mm, can only be truly appreciated when they are viewed with a magnifying glass or a macro lens. The majority of species, however, are between 6 and 11 mm in length and as such it is quite possible to enjoy, and sometimes even identify, them with the naked eye.

A number of plant bugs are widespread and common and are happy to live in parks, gardens and hedgerows, so it is usually not necessary to go very far to find one. The Common Green Capsid (Lygocoris pabulinus) (photo 4), one of the few plant bugs that have a common name, is found on a wide range of plants and flowers, where it feeds on plant sap and nectar. 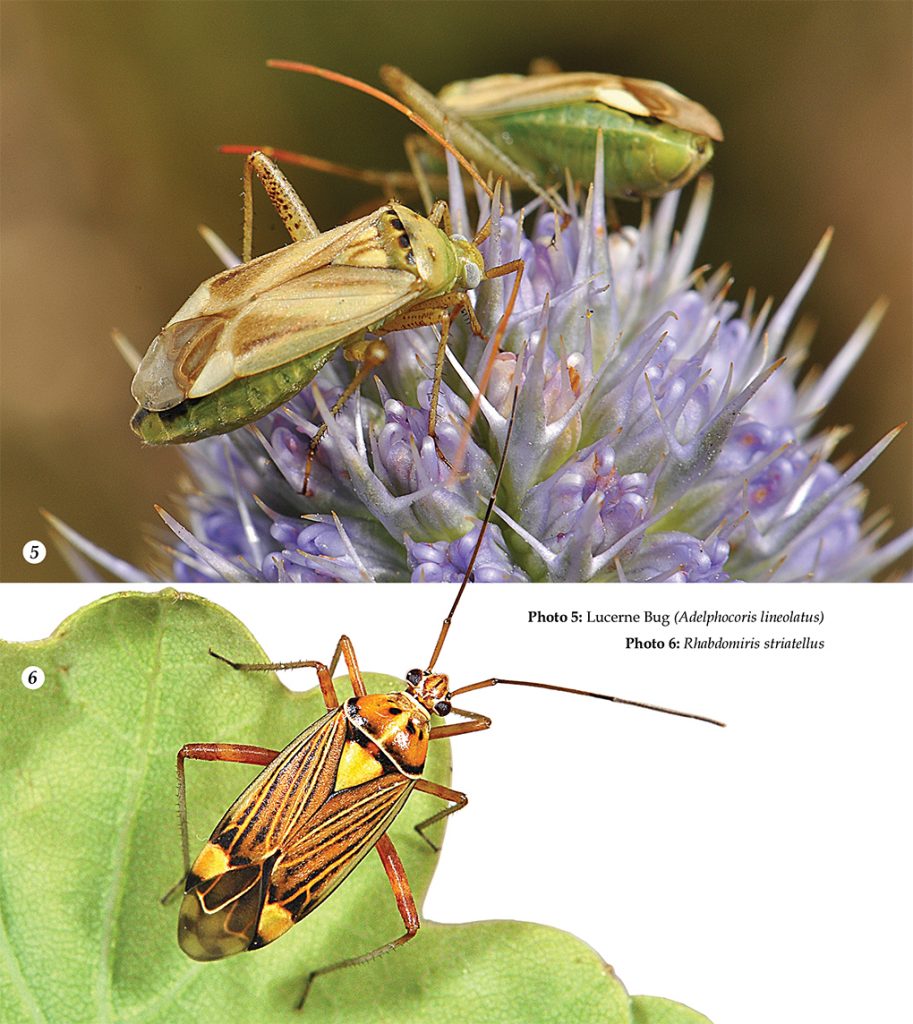 The Lucerne Bug (Adelphocoris lineolatus) (photo 5) also feeds on a range of plants but has a particular liking for legumes such as clovers and vetches. Other species are more particular in their choice of food plant, such as the intricately patterned Rhabdomiris striatellus (photo 6) whose main food source are the flowers and developing fruit of oak trees. While strictly vegetarian as nymphs, once adult this species is also partial to insect prey such as aphids. Many plant bugs live on a mixed diet of both plants and small insects.

One of these omnivorous species is the unmistakeable Heterotoma planicornis (photo 7), which is one of the few species that can be easily identified with absolute certainty with the naked eye. No other plant bug features such remarkable antennae in combination with a black body and bright green legs. 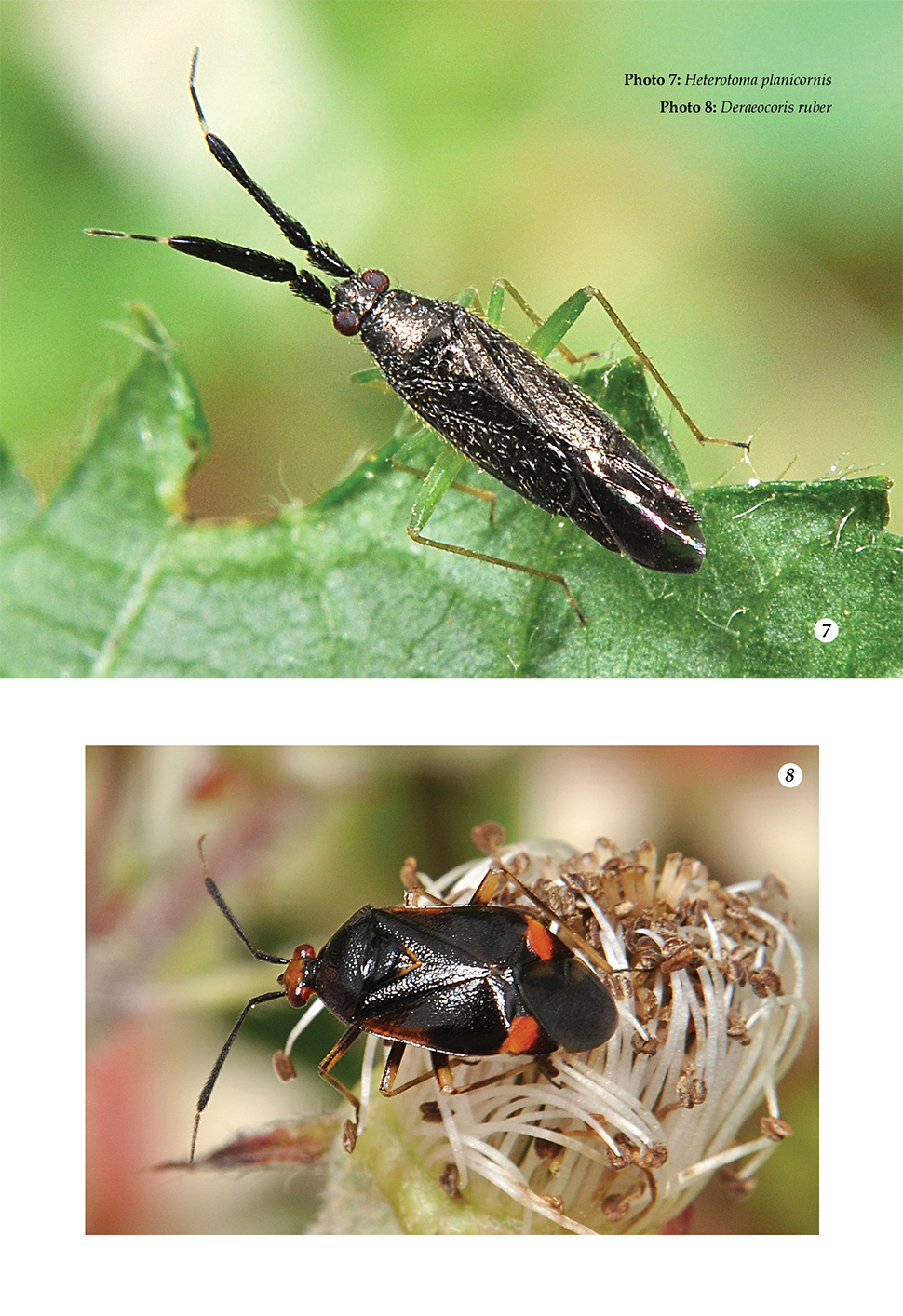 While most plant bugs are vegetarian or omnivorous, a few species such as Deraeocoris ruber (photo 8) never feed on plants at all and are exclusively predatory.

Being small and soft-bodied, plant bugs are themselves popular prey items of many larger predators. In order to maximise their chances of survival, they utilise a number of different strategies. Some species are able to produce a distasteful liquid from glands in their thorax and advertise the fact by sporting bright colours. Others only possess bright colours without tasting particularly bad and live in the hope that no one will ever find out. Others again try to blend in as much as possible in order to avoid being spotted in the first place, an art of which the grass-feeding Notostira elongata (photo 9) must surely be one of the masters. Phytocoris tiliae (photo 10) which spends much of its time on lichen-covered bark in trees is also able to blend in with its background to the point of invisibility. Pithanus maerkelii (photo 11) has perhaps come up with the most extreme defensive strategy in that it has changed its entire body shape to look like an ant, so much so that it no longer develops fully formed wings. Like ants, it spends a lot of time on or near the ground and does very well for itself pretending to be one of its rather more formidable neighbours.

Young Pithanus maerkelii look very much like miniature adults, and in the other species of plant bugs, too, the nymphs are generally similar to the adults but without wings, and often with more muted colours. Newly hatched nymphs can sometimes look a little like aphids but they increasingly resemble the adults as they grow. They moult several times over the course of the spring and summer before becoming adult, mating and laying their eggs. These they often conceal in plant stems to protect them from the females of certain species of tiny wasps (less than 1mm in length) which are always on the hunt for plant bug eggs. If one of these wasps finds a plant bug egg, it lays one of its own eggs into it and the wasp larva will develop inside it in place of the plant bug embryo. In most species of plant bugs it is the eggs that manage to go undetected by such parasitoids that go on to overwinter, but occasionally it is the adults that brave the cold, laying their eggs in spring.

Plant bugs, even the purely vegetarian species, rarely cause problems for gardeners. In fact, a number of the more predatory species are popular biological control agents. Every now and then the feeding activity of some species can cause distorted leaves and buds, particularly on fuchsias. The damage to the plants in those cases is not caused by the physical insertion of the mouthparts, but rather by compounds in the saliva injected during feeding which go on to trigger the abnormal growth. In large-scale farming, certain plant bugs have been known to cause somewhat more significant damage, particularly in the tropics. The Lucerne Bug mentioned previously, for example, can produce multiple generations a year in warm climates and can damage alfalfa crops, whereas the beautiful Stenotus binotatus (photo 12) which feeds on developing grass seeds, can become a pest of wheat.

Overall, though, plant bugs are harmless, beautiful, elegant little insects which never cease to impress with their multitude of shapes, colours and patterns, and never fail to disappoint an observer prepared to take a closer look.