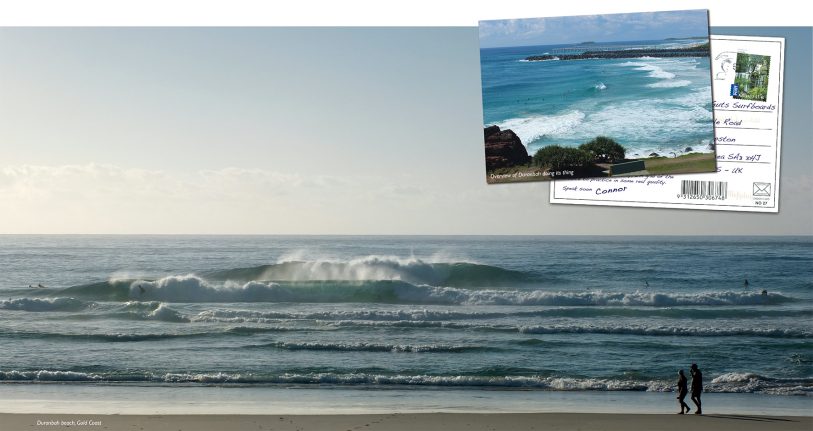 The last two months have flown by. The little cove town house is done for 2016. What an experience. Noosa, fair play you definitely delivered not just waves but meeting new friends and making fantastic memories. This week I dropped Mr Hocking off at the airport as he’s off to Bali, then started my journey down the coast. First stop was the Gold Coast and I turned up to catch a solid 4ft wave at Duranbah, going off its nut. What a difference, one day I was in super fun point breaks to then surfing beach break barrels.

That same day I ripped the fin box out my short board. This was bad news as I only had 250 bucks left to my name and that was fuel money to get me to Sydney, the ding set me back 100 bucks so my budget took a massive hit! This wasn’t good but at least I had my board fixed!! Once I got my board back I went and surfed snapper on both my short board and my longboard. It wasn’t ‘pumping’ snapper but was good by Welsh standards ha-ha! I got to watch the likes of Mitch Parkinson absolutely tear it up!!

After 4 days on the Gold Coast I headed down to Lennox Head and Byron. I met up with loads of people from back home – the Davenports, Adam, Rob and Andy. It was like being back at home but in Aus! The swell for the four days I was there was very small, but I managed to get a few really good surfs in. Mainly short board stuff, but I did manage to bust out my longboard for a few waves. The difference in the amount of waves in Lennox and Byron is amazing; there are waves to suit whatever you ride or whatever you’re feeling. On my last day there I got called out of the water twice by the lifeguards as there had been sharks amongst the surfers! My first proper scary shark situation! I was out of the water both times before the lifeguards could say ‘hello’. 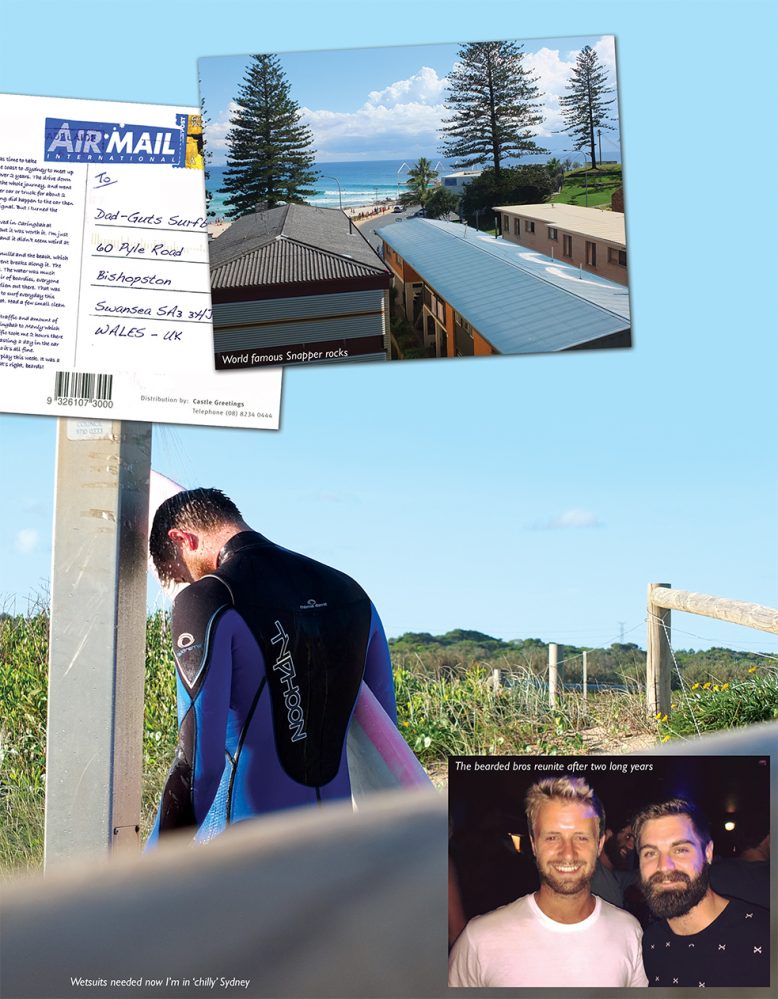 After my time in Lennox Head it was time to take the gruelling 12 hour + drive down the coast to Sydney to meet up with my brother who I haven’t seen in over 2 years. The drive down was quite daunting as I was alone for the whole journey, and went through stages where I didn’t see another car or truck for about 2 hours. It was getting dark so if anything did happen to the car then I would be alone with not much phone signal. But I turned the music up and hoped for the best.

Eventually after a 13 hour drive I arrived in Caringbah at 1:55am. It was a long and tiring drive but it was worth it. I’m just glad my car made it. We were reunited, and it didn’t seem weird at all, it seemed like he had only just left!

The next day he showed me around Cronulla and the beach, which is one long stretch but has loads of different breaks along it. The surf wasn’t great but I just had to get wet. The water was much colder down this way although I wore a pair of boardies, everyone else was in short arm 2mms so I was the alien out there. That was my last surf in boardies. I have managed to surf everyday this week but unfortunately it hasn’t been great. Had a few small clean days but still nothing special.

One thing I dislike about Sydney is the traffic and amount of cars on the road. One day I drove from Caringbah to Manly which should only take an hour, but with the traffic took me 2 hours there and 2 and a half hours back. Talk about wasting a day in the car but I keep telling myself I’m in Australia so it’s all fine.

Sacha, Lessa and I went out to see a band play this week. It was a band that sang songs about beards – yes that’s right, beards! We fitted in really well lol.