For those who like getting their boots on and venturing out into the great outdoors the winter of 2015-16 was a great disappointment; December 2015 was Wales’ wettest ever month with 321mm of rainfall bringing the misery of widespread flooding. 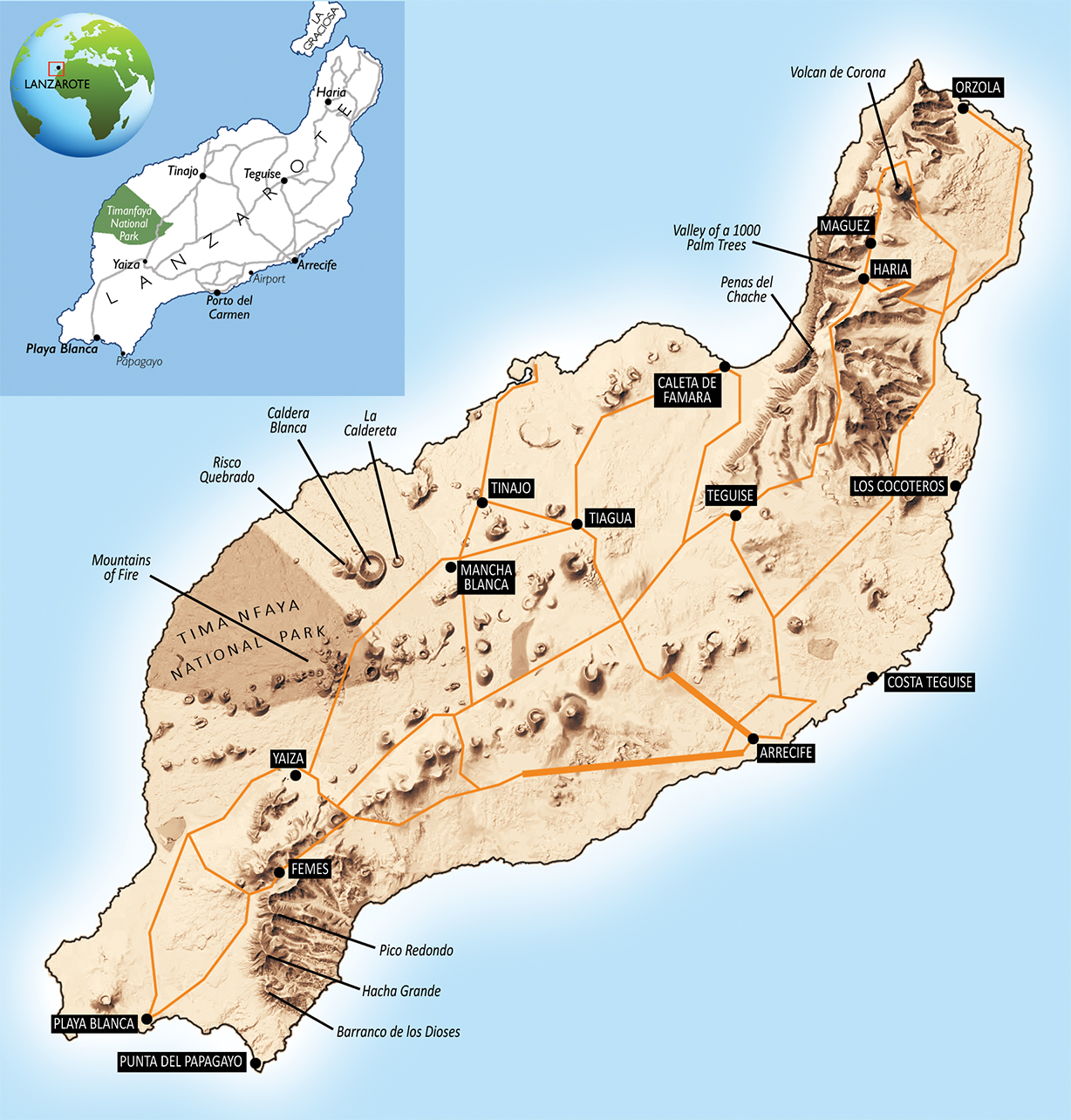 Lanzarote lies just 78 miles off the coast of Africa and with a desert climate enjoys very little precipitation and average winter temperatures of around 18 degrees C (64 degrees F). In December it has an average of six hours of sunshine each day and a 9% chance of rain on any given day. The weather is perfect for exploring the island on foot following the many excellently way-marked mule tracks, cliff paths and old pilgrimage trails that spread across the island. Coupled with beautiful beaches, cheap accommodation, lovely food, a good bus service and reasonably priced flights from Cardiff or Bristol airport the island makes a great walking destination; anyone prepared to look beyond the large noisy resorts will discover a whole world of dramatic volcanic scenery, white-washed villages, hidden sandy coves, vineyards and palm groves up until now virtually undiscovered by British walkers.

What makes Lanzarote such an appealing walking destination is the presence of the sea – never too far away – and available at the end of a long day to sooth those aching muscles. So a bathing costume is just as essential as walking boots. But even in winter the sun is strong here and sunscreen and a hat are necessary.

The whole of the island is a UNESCO Biosphere Reserve the core of which is the Timanfaya National Park, named after Lanzarote’s only active volcano. Between 1730 and 1736 over 30 volcanoes erupted in this area spewing huge quantities of magma onto the surrounding area and burying entire villages. Over a quarter of the island is now covered by these rough lava fields – a dark brown rocky landscape known as Malpaís (in Spanish, ‘badland’) reflecting how impossible it is to cross on foot. The colour of the landscape gave its name to the native islander’s name for their home: Tyterogaka or “one that is all ochre”.

The best way of appreciating the huge volcanic forces on the island is to walk the circuit around Caldera Blanca. Starting at the village of Mancha Blanca the route follows a rugged path which has been created through the jumbled mass of angular blocks making up the lava flow before using dirt tracks back to the main road to Yaiza.

Information panels are located at intervals to explain the geology and flora of the region (photo 1). 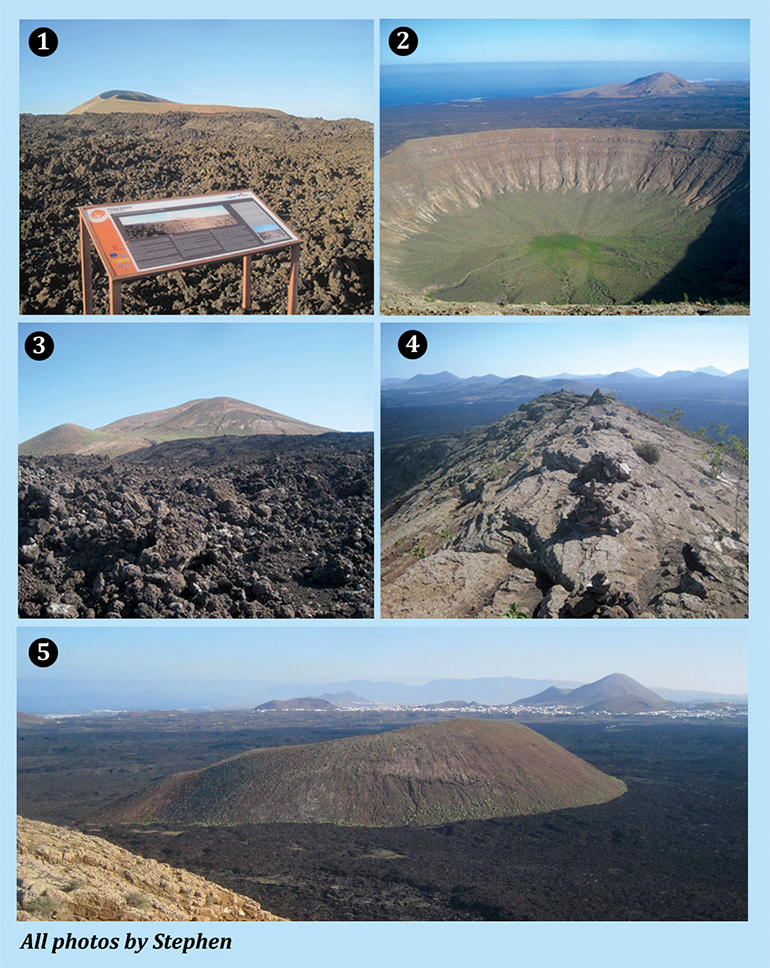 For fit walkers confident on steeper paths an ascent can be made of Caldera Blanca (458m) with its almost perfectly circular crater measuring 1.15 km in diameter (photos 2, 3 and 4). Together with its neighbours La Caldereta (324m) (photo 5) and Risco Quebrado (312m) the Caldera forms an “isolate” – an island in the “sea of lava” which surrounds it on all sides. Meaning “white crater” Caldera Blanca is not of recent origin and its surface has been bleached by harsh natural processes since its creation 3000 to 5000 years ago. From the summit there is a magnificent view of the Mountains of Fire and the rocky coastline beyond where parts of the movie In the Heart of the Sea (2015) were filmed. A visit to the National Park Centre a kilometre from Mancha Blanca completes the walk and provides useful background information to the volcanic landscape.

Another superb walk starts at the beautiful village of Femés, nestled between hills to the south of the island.

A path climbs before skirting the side of Pico Redondo (561m) along the bare mountainside; this does require a certain amount of care but should be within the capabilities of most walkers. Here your only companions will be goats before the route descends on an easy dirt track on the flanks of Hacha Grande (562m) (photo 6) and down the side of the Barranco de los Dioses to the coast (photo 7) where superb coastal views open up towards Fuerteventura and the Punta del Papagayo. From this headland it would take a very determined walker to ignore the fine beaches (photo 8) and cool inviting sea alongside the track to the resort of Playa Blanca, where the route finishes. 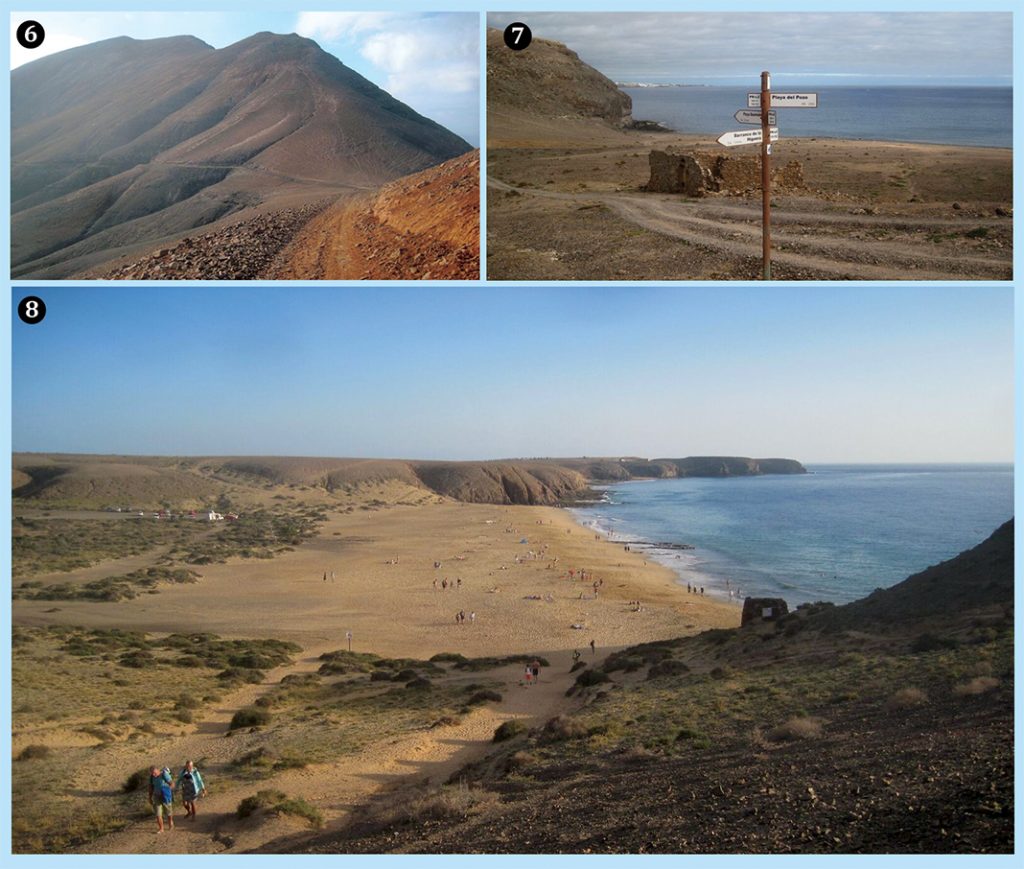 Lanzarote also hosts a 45 mile stretch of the GR 131 trans-Canarian long-distance trail, traversing the island from Playa Blanca in the south to Orzola in the north which can be undertaken in manageable stages. I walked the 23 km between Teguise and Orzola which progressed through idyllic rural scenery (photos 9 and 10) before climbing gently up to Peñas del Chache (photo 11), the highest point in Lanzarote (although a military zone and out-of-bounds to the public). The route then descends through the lush Valley of 1000 Palm Trees to the delightful village of Haría (photo 12) before proceeding to Máguez and Orzola (photo 13) through an old wine producing area marked by crumbling protective semi-circular stone walled zocos (photo 14) below the jagged rim of the Volcan de Corona (609m). At Orzola walkers can be revitalised by plates of fresh cherne (grouper) fish and the local patas arrugadas (boiled potatoes) washed down with delicious Canarian Malvasia wine – a perfect finale to a rewarding day. This walk can be undertaken in two stages using the bus service from Arrecife to Haría and Máguez or in one long haul. 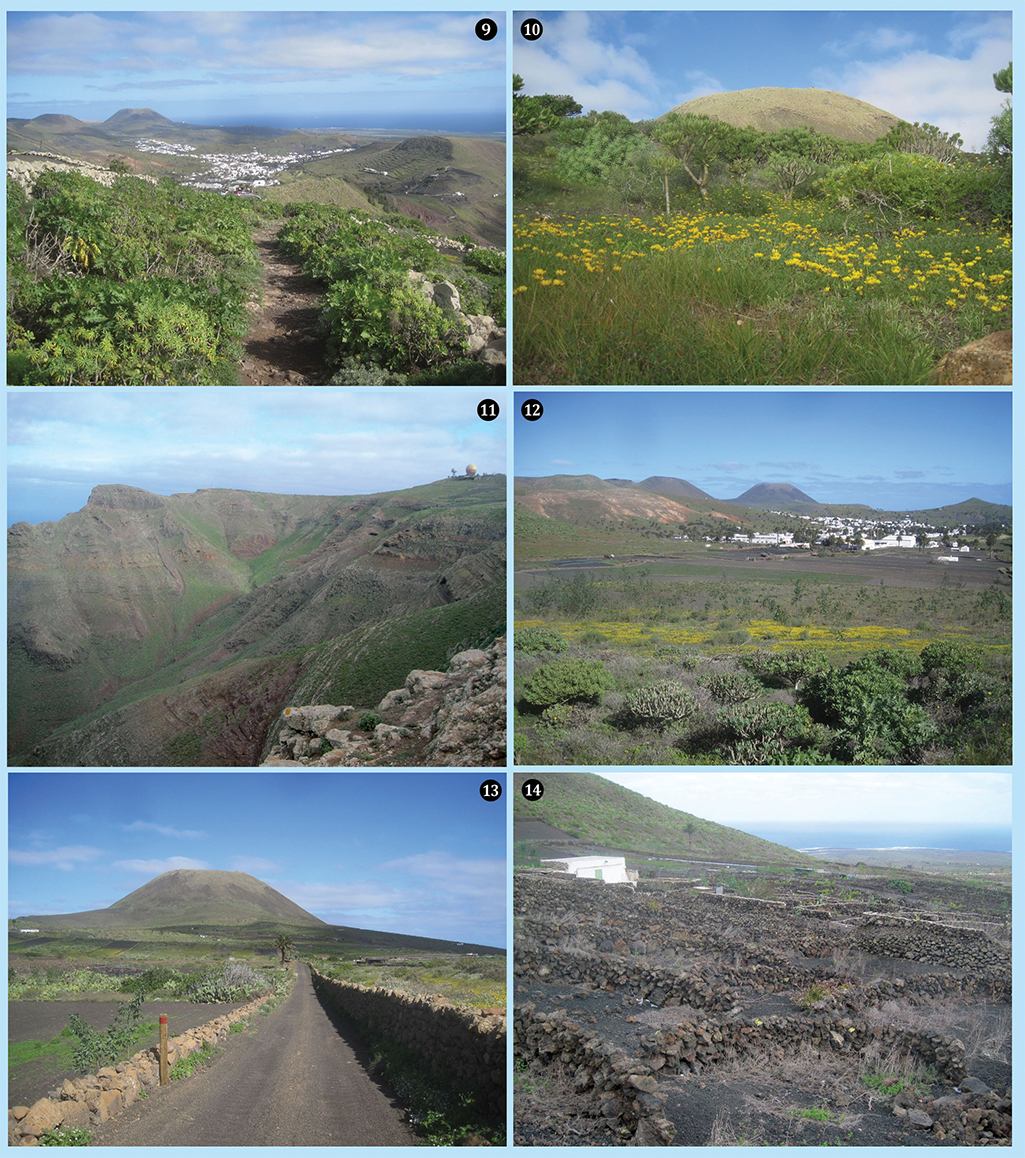 For those wanting gentler walks Lanzarote has an abundance of routes serving a wide variety of abilities. Examples of these are the exhilarating coastal path from Los Cocoteros to the vibrant resort of Costa Teguise on the east of the Island (photo 15) or the quiet backtracks across gentle sandy slopes linking Tinajo or Tigua and the surfing village of Caleta de Famara. (photos 16-19

Whatever you choose to do you will not be disappointed!

Robust boots, sun screen, a hat, waterproofs and water (there is none outside of the villages)