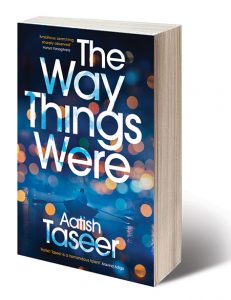 We welcome a serious new Indian novel by a British/Indian writer Aatish Taseer, whose book The Way Things Were is a work that is as important in analysing the nature of modern India as Sir Salman Rushdie’s Midnight’s Children. Like Rushdie, Taseer conveys sophisticated ideas and ideology in perfect prose, an intellectual giant straddling the contemporary world of English literature.

Taseer’s fictional protagonist, Toby, Maharaja of Ketu is an academic and a well known Indologist who seeks answers to India’s modern day conundrums via the study of ancient Sanskrit literature. The theme running through his semantic and semiotic discourse is the turbulence of the Sikh community in India of the nineteen eighties, their energetic quest for their own identity vis a vis the Hindu majority, and the ensuing violence culminating in the assassination of the Indian Prime Minister Indira Gandhi.

In sharp counterpoint to the violent nationalism of even the smallest state or community the world over, Toby, on a continuous quest to establish that the family of man had a single linguistic origin, seeks cognates for every Sanskrit word or concept he encounters in his studies, linguistic similarities with Latin, ancient Greek, Anglo-Saxon, old English, and Germanic, Gothic and Celtic tongues. I was fortunate in my youth to have known the eminent German Indologist Prof Dr Heimo Rau and am familiar with the varied theories prevalent about Sanskrit as the original source of the languages of the  world. In Lithuania some remote communities have been found to still speak the 10,000 year old Sanskrit as their mother tongue to the astonishment of historians the world over.

Taseer’s protagonist Toby’s obsession with philology and comparative linguistics forms the substratum of his life, and is the thema of this impressive book. The Way Things Were combines erudite word play, and scholarly examination of the common origins of language with a very down-to-earth voyage into the Sikh psyche, offering an insightful history of this warrior community in modern India.

Aatish Taseer’s The Way Things Were is the seamless successor to Rushdie’s trail-blazing Indo-Anglian novels, a significant part of the body of international post-colonial literary work. 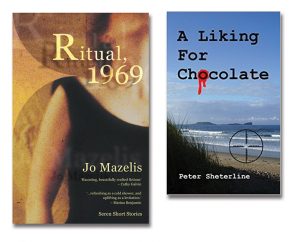 How gratifying it is to be able to bring you not one, but two superb novels by Swansea writers this month, including a self published thriller of unusual merit.

A good short story reveals an entire life in a few pages and Mazelis is an expert in this genre, giving us glimpses of the supernatural and frissons of horror in her nineteen short stories.

Though each story is complete on its own, several themes emerge that run through them at random. For example spiteful little schoolgirls playing a sinister game called ‘Levitation’, conjoined twins coping with life (cue Irvine Welsh’s novel The Sex Life of Siamese Twins), ghosts wandering through the pages….

Mazelis’ stories start as portrayals of the mundane, the humdrum, the supernatural peeking through in a very disturbing counterpoint. It is conceivable that the understated economy of Mazelis’ unembellished prose is easily underestimated. Her style is carefully crafted, sharply honed with the artistic intention of harnessing a deceptive simplicity.

Mazelis has earned a stellar position in the comtemporary literary world. Swansea is proud of our gifted local writer.

A Liking For Chocolate by Peter Sheterline (Self published £7.99)

Cybercrime on your doorstep

There is nothing quite so enjoyable as a novel set in a familiar locale: every Swansea resident will find resonance in Dr Peter Sheterline’s cyberthriller A Liking for Chocolate.

This action-packed narrative takes us from favourite haunts in Gower—all your favourite pubs including the Brittania in Llanmadoc, the Greyhound in Llanrhidian, Shepherd’s shop and café in Parkmill— to the Technium in SA1 and the Central Police Headquarters in Mt Pleasant where whimsically named Detective Inspector Kevin Bryn leads his team to solve the mysterious murders on Llangennith beach.

Self-published novels are rarely as good as A Liking For Chocolate—the title derives from crucial DNA evidence left by the killer on a discarded KitKat wrapper. This beautifully constructed thriller moves at breakneck pace and is utterly absorbing. I regularly receive books with a local setting but there is none I can recommend quite as highly as this debut novel.

Dr Sheterline has the advantage of being a scientist and an academic with an impressive backlist of published books and papers —- an unbeatable combination resulting in the precision and the logical excellence of A Liking For Chocolate. It belongs on your bookshelf, fellow Swansea dweller. Pick up a copy from the bigger Gower pubs or order it online from Amazon UK.

The three other books also on the list are The Story of the Lost Child by Elena Ferrante, The Four Books by Yan Lianke and A Whole Life by Robert Seethaler.

Orhan Pamuk remains the most serious contender for the 2016 Booker International prize with a submission of the highest literary merit, meeting all the criteria for literary excellence.

What is worth celebrating is that for the first time the translator is getting his/her due with the £50,000 prize being divided equally between the author and the translator of the winning submission.

The Story of the Lost Child by Elena Ferrante (Europa Editions £11.99) 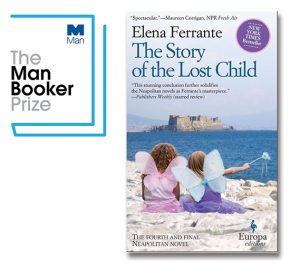 The Story of the Lost Child is the fourth in the hugely popular Italian novelist Elena Ferrante’s Naples quartet. Ferrante writes about the day-to-day minutae of politics, love and family relationships in the life of her protagonist Elena Greco, a writer, estranged wife, and mother who lives in a tough Neapolitan neighbourhood.

The success of the four novels in the Naples quartet lies in their soap-opera appeal; each chapter demands that you engage with the next, the whole novel is a very absorbing saga of Elena’s tempestuous relationships with her friend Lila, of her family comprised of a vivacious assembly of children, parents, in-laws, and of her passionate adulterous love affairs. This cornucopia of Italian life offers all the cosy familiarity of locale, characters and dramatic events that a Coronation Street or an Eastenders supplies week after week.

Of the literary merits of Ferrante’s work there is little to say. She writes competently and is extremely readable but the narrative, charming as it is, is linear and unchallenging.

The Story of the Lost Child makes no notable contribution to the body of world literature and is a likely winner, given the Booker judging panels’ tendency to select populist mediocrity over true literary excellence.