Few things are more evocative of a hot summer’s day in the country than the rasping chirps of grasshoppers. But the very sound that evokes scenes of relaxation and tranquility for us denotes the most eventful period in the life of the grasshoppers, a time when everything is geared towards outdoing rivals and every minute counts in the quest for a mate.

All groundhopper species are beautifully camouflaged and can occur in a wide variety of colours including mottled green, sandy and deep reddish brown. They all like damp areas and can often be found near ponds and streams, where they feed on mosses and algae. The Slender Groundhopper, in particular, is not averse to water and is even able to swim. 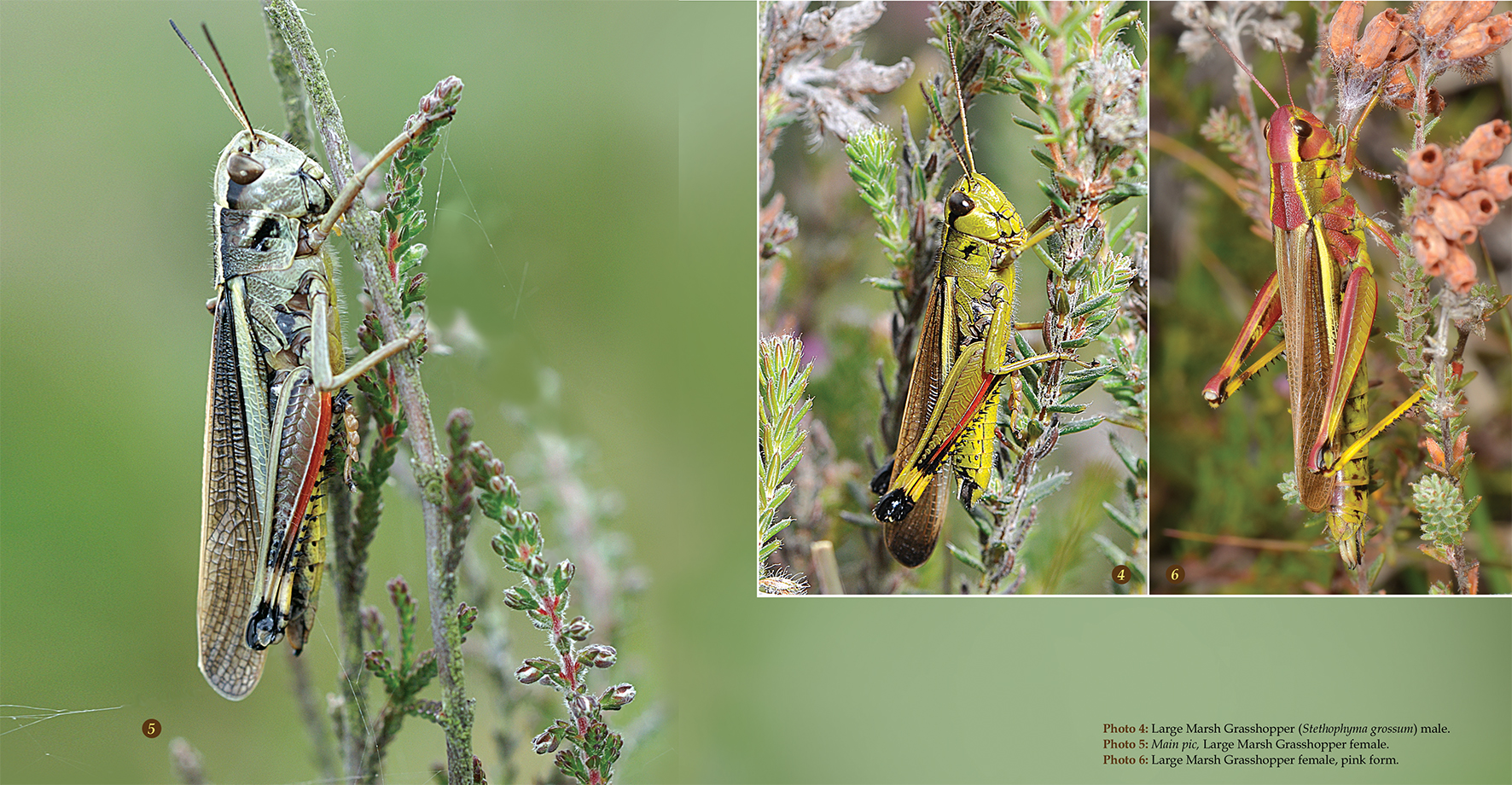 A number of grasshoppers also prefer damp habitats, particularly Britain’s largest species, the vividly coloured Large Marsh Grasshopper (Stethophyma grossum), which lives in marshes and bogs and can reach a size of up to 36 mm. It used to be common across Britain, but as a result of widespread land drainage it has now become very rare. As with all grasshoppers, the males (photo 4) are smaller and have longer antennae than the females. The Large Marsh Grasshopper is rather variable in colour, ranging from yellowish-green like the pictured male to olive-brown like the female in photo 5. In addition, females sometimes occur in a bright yellow and pink colour form (photo 6). 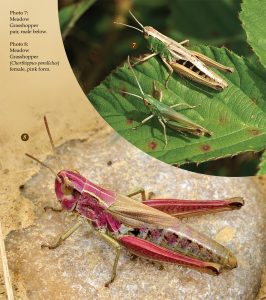 Striking pink female colour forms are not exclusive to the rare Large Marsh Grasshopper, they also occur in all four of the most frequently en-countered British grasshopper species. Probably the most familiar of these is the Meadow Grasshopper (Chorthippus parallelus), which can be found in a wide variety of grassy habitats, as long as they are not mown. Neither male nor female Meadow Grasshoppers are able to fly, even though the males have longer wings than the usually short-winged females (photo 7). The pink colour form can be very bright indeed (photo 8). 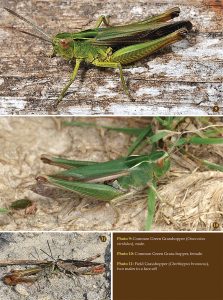 The third familiar species, the Field Grasshopper (Chorthippus brunneus) (photo 11) is happy living in dryer and more open habitats than the Meadow and Common Green Grasshoppers. The photograph shows two males during a face-off. This can occur when more than one male is courting the same female. In order to determine which male is going to be allowed to continue pursuing the female, the rivals face each other and produce their ‘aggression song’ until the weaker male withdraws.

Before such unpleasantries can ensue, a male will have attracted a female with his ‘normal’ song, switching to a gentler ‘courtship’ song on spotting the female. The female will have replied to the male’s song with a quiet song of her own, encouraging him to approach. Grasshopper songs are very distinctive, and it is often possible to identify a grasshopper by its song alone. In fact, some variable species can be easier to identify by their song than by their appearance.

With its 12 different colour forms, the fourth common British grasshopper, the Mottled Grasshopper (Myrmeleotettix maculatus) (photo 12), is a good example of such a very variable species. The pair in the photograph have progressed from courtship to mating. This can be a drawn out affair during which the male sometimes loses his grip, leaving him in a somewhat precarious, not to mention awkward, position.

Shortly after mating, a female grasshopper gets ready to lay her eggs. A few species, for example the Large Marsh Grasshopper, lay their eggs at the base of grasses because the ground in their habitat is often waterlogged, but most species bury their eggs in the ground, as demonstrated by the rare Heath Grasshopper (Chorthippus vagans) female in photo 13. Female grasshoppers secrete a frothy liquid around their eggs which hardens and provides protection for the eggs during their long rest until the following spring.

When the nymphs first emerge from their eggs they have a strange worm-like appearance. They make their way out of their egg pod and through the soil to the surface in this curious state before shedding their protective embryonic skin and emerging from it as miniature grasshoppers. They then go through a series of moults over a couple of months, growing bigger in size and developing larger wing buds at every moult, before reaching their adult moult at which their wing buds turn into wings. The freshly moulted adult Field Grasshopper in photo 14 is in the process of waiting for its newly expanded wings to harden.

Many British grasshopper species can fly rather well and stalking one can become an interesting experience when, just as it is coming into focus for the perfect photograph, it spots the approaching camera and instead of trying to escape in time-honoured grasshopper fashion, it flies off into the distance. Luckily, in those situations there is usually a rival singing not too far away, quite oblivious to the fact that along with potential mates it is also successfully attracting the occasional entomologist.

Photos courtesy of Paul D. Brook. His latest bestseller A Comprehensive Guide to Insects of Britain & Ireland (Pisces 2015) covers more than 2100 species and is available from www.naturebureau.co.uk/bookshop or call 01635 550380