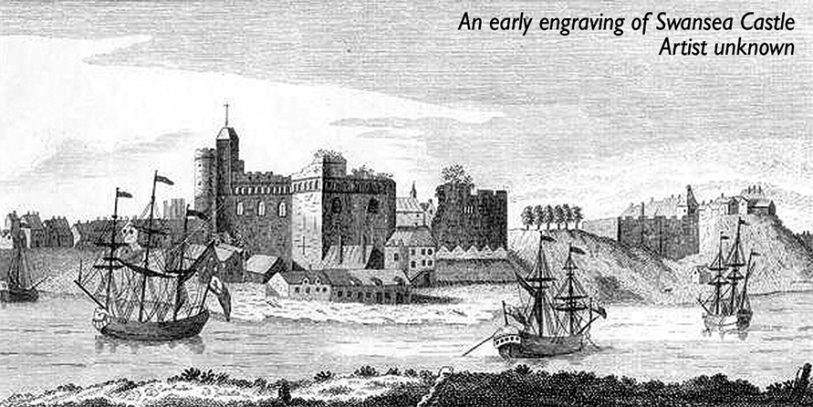 In this month’s article I will be removing the dust off the record books, on criminal records and what information they provide. The earliest form of criminal deterrent in Swansea during the latter part of the 18th Century was the Debtors’ Prison, located in Swansea Castle, and owned by the Duke of Beaufort.

The prison at Swansea Castle comprised of rooms in the small rectangular tower to the north. Debtors’ Prison records have not survived. The Cambrian published a series of scathing reports from 1853 to 1856 on the condition of the ruined keep of Swansea Castle. Eventually in 1861 the prison moved. The castle was used for many different purposes during the 19th Century – a town hall, poor-house, a ‘new’ market house, store cellars, a blacksmith and other shops. The hall was used as a Roman Catholic chapel.

May 1829 saw the opening of Swansea’s House of Correction, known as Bridewell and was located on the land where the main wing of the present Swansea prison stands. The House of Correction was administered by the Justices of the Peace. The first governor, William Cox, leased the adjacent land to grow vegetables, although in time he lost this land. Sentenced prisoners were punished by the dreaded treadmill, 64 inmates could operate it at one time. At one time there were two prisons in Swansea.

Swansea Borough Police Force was established in 1836, following the Municipal Corporations Act, At this time the ‘new’ police station house was built at the junction of Temple Street and Goat Street. The force numbered one Inspector and six constables. Each man was issued with a staff and rattle. The first murder that the police force dealt with involved a group of Irish men. John Bowling, was protecting his wife from being attacked by fellow Irish men. John was murdered with a hatchet in August 1842 at Bethesda Court. This murder case was reported in The Cambrian. His murderers were sentenced and sent to the Woolwich Hulk, a dark, damp and verminous decommissioned warship anchored in the mud off Woolwich, London. By 1852, the Swansea Force consisted of Henry Tate, the acting inspector, two sergeants, two detective officers and sixteen constables one of whom was my 4 x great grandfather Henry Wheatley. By this time, the uniform worn by the police was a three-quarter length coat, with a belt, and the constable’s number was displayed on the upright collar. By 1874 a ‘new’ Central Station was opened in the High Street on the corner of Tontine Street.

I will write a more in-depth article on the police presence in Swansea. I would be interested to hear from anyone who has connections with the early police force.

Meanwhile, with the debtor’s prisoner at the castle being condemned, a new site had to be sought where prisoners could be held. A Victorian prison, located along Oystermouth Road was built between 1845 and 1861, on the land that was known as Cox’s farm, the land on which the first governor, William Cox had grown his vegetables. The prison finally opened during 1861 and housed both male and female inmates, until 1922 when the women were moved to Cardiff Prison.

The prison was able to house 242 prisoners during this period. Before the prison was opened, the ‘first’ public execution, of two Greek men, Panotis Alepis and Manoeli Selapatana took place during March 1858.  In Medieval times, Gibbet’s Hill, by the Jewish Cemetery, was the place for executions. During 1855 North Hill Road, was called Gibbet Hill Road.

The two illustrated records that I have used in this article (pics left) are of the entries from the Prison Registers of Rachel Kelly and William Edmunds. Both of them were tried at Swansea Borough Court House, located at Somerset Place.

Entry No. 569, Swansea born, 38 year old William Edmunds was in court on 31st October 1884 for Assaulting Police – whether that meant one police man or the whole force isn’t clear, the jury is still out on that one! He was given 7 days hard labour or a fine of 16 shillings (£307 in 2016). William’s general appearance as described by the register is that he is 5ft 8 ¼ inches with brown hair. His occupation is recorded as a painter. He is an atheist, and his education level Imp – he had the ability to read and write but imperfectly.  He didn’t have any previous convictions. He was lucky to pay the fine and didn’t end up in prison. Business must have been good, I wonder what his daily rate was.

From the women’s register, entry No. 65, Newport born, 23 year old Rachel Kelly was in court on 18th May 1887 for stealing a jacket. She was given 14 days hard labour or a fine of £1 (£387 in 2016). Rachel’s general appearance as described by the register is that she is 4ft 10 ½ inches with brown hair. She was married. She has no previous convictions and that she was released on the 31st May. Also that she was of the Wesleyan region.

Life in Swansea Prison must have been very grim for those 14 days. Hopefully for both William and Rachel this is where their criminal life ends, but those Victorian prisoners who had a criminal record as long as my arm, their ‘new’ entry in the register will have had their previous convictions listed. Interesting reading!

These entries from the prison registers are a valuable resource into the ordinary lives of our Victorian ancestors. 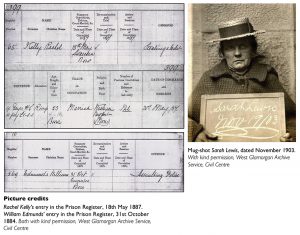 A final note on photography, the advances in photographic technology during the Victorian period, was a huge aid for the police force, as they were able to take mug-shots of those criminals.

An example of a mug-shot in this article is that of Sarah Lewis, (pictured left) dated 1903. Looks a really lovely lady – I wonder what she did wrong, and how long her criminal record was.

If you had a Victorian ancestor who had a raw deal with the authorities, don’t hesitate to drop a line at swanseafamilyhistory@yahoo.co.uk 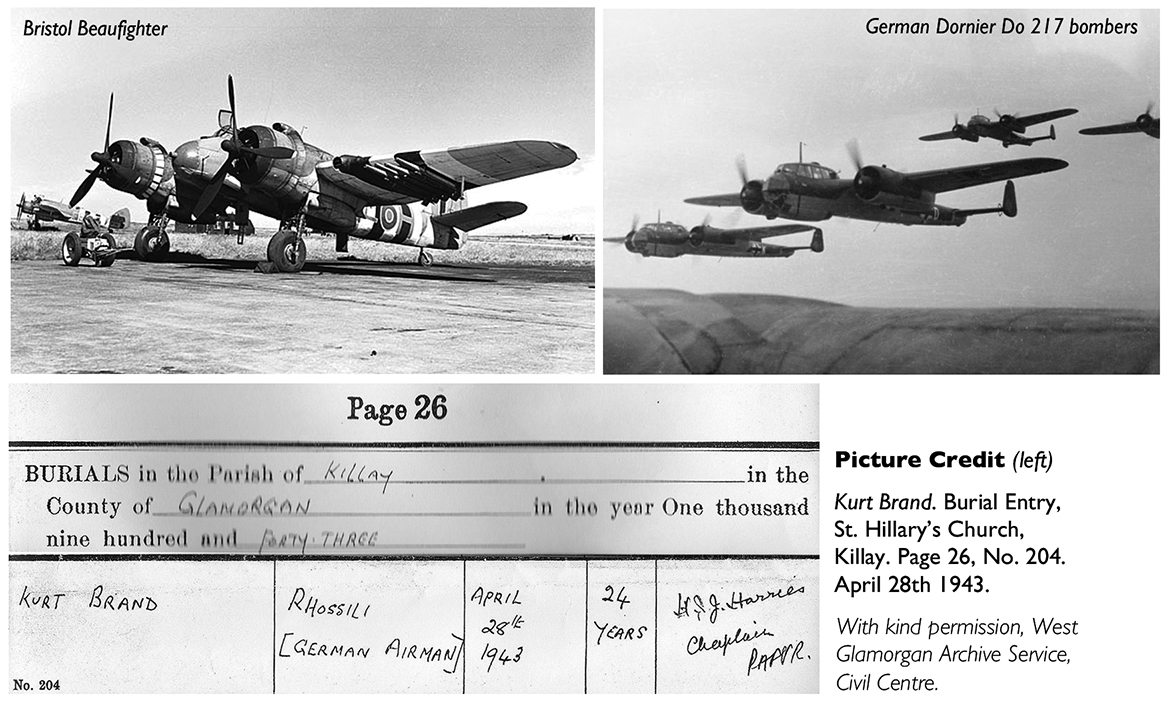 I received an email from Mrs Margaret Williams, who writes… “I was surprised to learn that a German had been buried in St. Hilary’s Church, Killay, during the wartime years of 1939/45. I am extremely interested in hearing the reasons for this and the whole story relating to this event”

Yes, there was a German, Kurt Brand buried at St. Hilary’s, Killay. We have to turn the hands of time back to 1943, 16th February, which was the last night that Swansea was bombed dur-ing the war. On this night 32 HE and numer-ous incendiary bombs were dropped, and there were 34 civilian deaths. According to German sources, the Luftwaffe dispatched 37 Dornier Do 217 (pictured right), each aircraft had a crew of 4. The squadron took off from Eindhoven, Holland, refuelling at Evreux, France. At the same time, in Swansea, 125 Squadron RAF were based at the newly constructed in June 1941, RAF Fairwood Common.

The squadron received the first warnings of the Luftwaffe attack and scrambled Beaufighter aircrafts (pictured above). One of the Dornier Do 217 was shot down in flames crashing at around 22.25 into the sea off Port Eynon. There were no survivors. The particular aircraft in question was crewed by Pilot Gunther Hubenthal; Wireless Operator Karl Hochmuth; Flight Engineer Hans Krause and Observer Kurt Brand. On 25th April 1943, the badly decomposed body of the German airman was washed ashore at Rhossili, and later being identified as Kurt Brand. A death certificate was issued on the 27th April. The information from the certificate states that the cause of death was “Due to War Operations”. Other information gleaned from the certificate gives his occupation as German Airman and his service number as 58213/184. A copy of his death certificate will be located in the church. Interestingly the information that I have found regarding Second World War German dog tags, indicates that the only information etched is the wearer’s service number. Kurt Brand’s military funeral took place on 28th April at St. Hillary’s Church, Killay. The funeral was conducted by a RAFVR Padre H.S. J. Harries. His name, is found in church’s burial registrar, Page 26, burial No.204. These registrars are to be located in the West Glamorgan Archive Service, Civil Centre. He was buried alongside the church hall, away from the Allied Airmen. Today, there is no indication as to where he was buried for 20 years. St. Hilary’s, the closest graveyard to RAF Fairwood, is the final resting place of RAF service men from many other countries. During March 1963, following an agreement made between the British and German governments, Brand’s remains were exhumed re-interred at the Cannock Chase German Military Cemetery, Staffordshire.

All the other men on board the plane were never found, the sea off Gower remains their final resting place.