“I married an archaeologist because the older I grow, the more he appreciates me”

On a weekend stay in Devon I went along to Greenway House, the holiday home of Agatha Christie which sits in the midst of beautiful gardens on the hillside above the River Dart. Agatha Christie (known locally by her married name Mrs. Mallowan) called Greenway ‘the loveliest place in the world’. She would come here to relax, often after finishing writing one of her books, and it was the place of family gatherings for many years.

For those familiar with the novels written by the ‘queen of crime’ three were set here, in this house – Five Little Pigs, Ordeal by Innocence and Dead Man’s Folly where Greenway appears as Nasse House, and where its boat house is the setting for a murder.

Each room of the house offers a glimpse into the family who were all extensive collectors, five generations collected over 11,000 objects. Table tops and cupboards overflow with numerous items including books, china and silverware, some pieces were brought to Greenway from Ashfield, a Victorian mansion in Torquay which was Agatha’s childhood home. Others were amassed from their time travelling the world, as Agatha’s second husband Max Mallowan was a prominent British archaeologist who specialised in ancient middle eastern history.

As you walk through the rooms which remain the same as the family left them, you sense the happy times the family spent here, in a perfect retreat away from public life. Dominoes and card games are laid out in front of the fire in the drawing room, black and white images in gilded photo frames sit on top of Agatha’s Steinway piano. In the old stable block a short film plays of Agatha’s grandson Mathew reminiscing about his childhood holidays at Greenway. 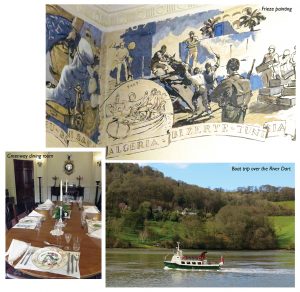 During the second world war, Greenway was requisitioned, initially to house child evacuees, and then from 1944 to 1945 by the US Coast Guard in the preparations for D-Day. Today you can still see evidence of the Coastguard’s occupation. Edging the four walls of the library is a frieze painted by Lieutenant

Marshall Lee a graphic artist. The murals describe the events which occurred during their eleven months’ journey to Greenway. His use of only four colours blue, khaki, black and white makes quite a statement.

After the war, Greenway once again became a holiday home for the Mallowans. In 1959 Agatha’s daughter, Rosalind Hicks, bought the house from her mother; she moved in after the deaths of Agatha in 1976 and Max in 1978. Rosalind and her husband further cultivated the gardens at Greenway which is a riot of colour and scent in the spring with camel-lias, magnolias, rhododendrons, and woodland walks carpeted with snowdrops and daffodils. Today their legacy is enjoyed by many visitors as they donated their home to the National Trust in 2000. 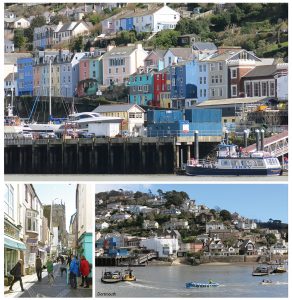 After visiting Greenway it’s worth driving on to the charming seaside town of Dartmouth. The harbour and surroundings may look familiar as they were the location for the BBC drama The Onedin Line. Boat trips run along the Devon coast and two small car ferries criss-cross the River Dart. Explore the narrow streets, browse the many galleries and gift shops and finish off your visit with a traditional clotted cream tea in one of the sea front cafes.

You can reach Greenway by ferry, steam train, by car or on foot.