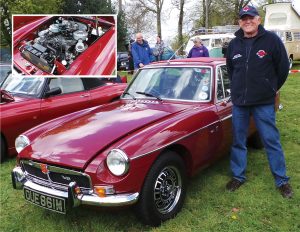 Back in the late 1960s I bought my first MG. It was the latest model, a BGT finished in Damascus Red. Up to the minute, its features included opening doors and tailgate, suspension, glass and seats. It was made in Swansea and was supplied by a dealer in Newton Road, Mumbles. If you haven’t guessed it was a Corgi Toy and cost me about seven shillings and eleven pence in pre-decimal money.

Earlier this month, I met fellow Swansea motor enthusiast Paul Smith (pictured above), at a car show – while chatting with him I managed to get a bit of history on his fine car. Paul bought his 1973 MG BGT 3500cc V8 in 1978 and kept it on the road until1983 when mechanical problems started.

In 1996 the MG which is one of only 1700 chrome bumper models manufactured, was in line for restoration and finally in 2015 it was finished. The restoration is superb and the car has to be seen to be appreciated. Paul is a member of the Swansea MG Enthusiast Club and has been since 1978.

He tells me the club is a friendly family club with plenty going on.

Paul also owns a 2004 MG TF “SPARK” a limited edition of the last type of MG made by MG Rover.