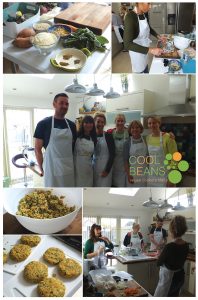 I’M AN OMNIVORE WITH VEGETARIAN TENDENCIES. I CAN HAPPILY SURVIVE IN A MEAT-FREE ENVIRONMENT SO LONG AS I HAVE ACCESS TO CHEESE AND EGGS, SO I WAS CURIOUS TO SEE IF I COULD BE DRAWN TO A VEGAN DIET. RACHEL JAMISON OF NUTRI BALANCE SWANSEA RUNS VEGAN COOKERY CLASSES FROM HER HOME IN SKETTY UNDER THE TITLE OF COOL BEANS. AS REGULAR READERS WILL KNOW, RACHEL HAS BEEN PROVIDING TheBAY WITH VEGAN RECIPES FOR SOME TIME NOW, SO I WAS DELIGHTED WHEN SHE SUGGESTED I POP ALONG AND JOIN IN WITH A CLASS.

I was, to be totally honest, a little wary of joining in with the group – would I stand out as a social pariah because I ate meat? Would they all be skinny and a bit flaky in a hippy-dippy kind of way as so often depicted? Absolutely not – I joined in with a group of lovely ladies, Catherine, Julie-Anne, Sally and Sophie and one gentleman, Geoff – some of whom were vegan and some like me who weren’t – but they all were intelligent and informed about the changes that they could make to not only their diets but their lifestyles by cutting down on or completely cutting out animal products. If I might just pause here to blow apart any myths surrounding veganism being a feminist issue – both the chap on the course and Rachel’s husband Rob prove that you don’t have to eat meat to be manly – I won’t elaborate.

According to a new survey commissioned by the Vegan Society, there are now 542,000 vegans in Britain today compared with 150,000 in 2006 – that’s over a 350% rise in 10 years. And being vegan is far easier today than ever before, with the arrival of new restaurants and existing ones adding meat and dairy free options to their menus. In Swansea we have Urban Zen, which is completely vegan; Govinda’s which is vegetarian and vegan, Crumbs and Mosaic, although not meat/fish-free offer customers many vegan options and alternatives.

Rachel had devised a range of dishes for us to make, that provided an opportunity to try out alternatives to the usual animal based ones. Our first recipe was an avocado pesto; this was my kind of cooking, chuck the entire ready measured ingredients into a blender and give it a zhuzh. Voila, you have a dip that can be spread on crudités or toast or even used as a pasta sauce. The chickpea and carrot burgers were a little more involved as we had to sauté an onion, but the effort was well worth it. These cute little patties once fried and oven baked could equally be served in a bun or in smaller sizes as a sophisticated pre-dinner canapé.

A short break for a coffee provided us with the opportunity to get to know our classmates, but first of all we had to choose the type of milk to add. As someone who drinks their coffee black I hadn’t realised just how many varieties of non-dairy milk were available to buy in the supermarket. Almond, coconut, soy, hemp, oat – and they all taste quite different from each other. To accompany our coffee Rachel had made some chocolate brownies and coconut energy balls – the recipe for the energy balls appeared in TheBAY in March and is still available on-line.

Back to the kitchen and our next task was to prepare the dough for the spelt and buck-wheat tortillas. These too have appeared in the magazine, this time in April. Everyone was surprised at just how quick it was to knock up a batch of freshly made flat breads which tasted so much better than commercially produced ones. To round off our session we moved onto the almond and feta style cheese – this was going to be quite a challenge as we first had to make our milk.

The resulting ‘cheese’ was quite feta like in texture and would probably have improved after a little time in the fridge. I love grains and pulses, and quinoa (pronounced keen – wa) is one of my favourites. It’s wheat-free and is an alternative to bulgur wheat, couscous and rice.

Like buckwheat, quinoa has an excellent amino acid profile as it contains all nine essential amino acids making it a complete protein source – so it’s an excellent choice for vegans who may struggle to get enough protein in their diets.

Rachel’s recipe included green pumpkin seeds, raw beetroot, carrot, avocado and baby spinach with a tangy vinaigrette. It’s a fabulous pink salad and will certainly be making an appearance at my next barbeque.

If you fancy expanding your culinary repertoire to include some meat free alternatives this summer, contact Rachel to join in on one of her next classes – even if you’re not vegan you’ll be made to feel very welcome.