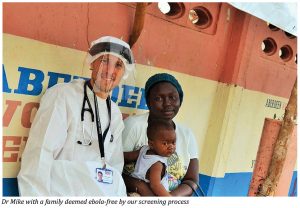 One morning last year, as I sat at my desk and opened my emails as usual I was surprised to receive one from a doctor in Sierra Leone. Dr MICHAEL BRYANT, one of the doctors who was helping to fight the battle against the terrifyingly contagious ebola virus, wanted to know if I was interested in hearing his story. Mike is now back in Swansea and the fight against this vicious disease is over for the time being.

Sierra Leone. I wonder what you think when you hear the name? In the nineties, a civil war tore through the country, smashing an already weak infrastructure and killing thousands. The last year saw Sierra Leone in the spotlight again, with masked people in ebola suits dominating the headlines. It was bizarre seeing my adopted home for the last five years being digested over breakfast news, and even stranger for the locals to suddenly have such media interest.

It was a no-brainer when I was asked to help restart a children’s clinic in the middle of the outbreak.

Today was difficult. There aren’t many easy days out here, but this felt exceptionally tough. I was woken up early by cries of alarm from several members of the community, frightened by a young man vomiting blood all over the middle of the road.

When I got there, the man had been left lying in the street on his back, surrounded by blood and sweat. There’s nothing particularly glamorous about an ebola outbreak! Myself and our nurse team leader put on full protective equipment and blocked off all the traffic, setting up a cordon around the patient and trying to calm him down as much as possible without actually touching him. No touch is incredibly tough when you see a critically ill patient who you know needs urgent IV fluids. Thankfully he was soon taken away for proper testing, so we will know if he actually has ebola tomorrow.

I was too hot to worry about the possibilities, and we were soon too busy with the crowd of sick children desperate to get into the clinic, none of whom were deterred by a blood stained man collapsing outside.

We have come up with a system where any child with a fever and three symptoms of ebola gets isolated in our no touch zone. We have to be strict about not touching these children, which is a huge emotional struggle when they are vomiting, suffer-ing, and clearly in need of a hug. Today we had to put three children in isolation, all of whom were even-tually taken to an ebola testing ward. We managed to give them all antimalarials and thankfully they were all tolerating fluids before they left.

Any child not suspected of ebola gets put into our overflowing main clinic. Today there were 108 children between me and one of our clinical health officers. Most of these were children with conditions which should have been treated earlier in the year, but were missed because the whole country was so busy fighting ebola. Lots of what we saw today is very treatable; typhoid, tuberculosis, malaria and pneumonia for example. I was grateful that we have oxygen available today as we had three babies who desperately needed it. 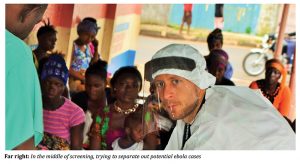 It was encouraging to see some toddlers from our malnutrition programme come back looking a lot chunkier this afternoon, even more uplifting was the way Sierra Leonean nurses took up their cause and encouraged every worried parent. Despite the daily tidal waves of suffering over the last eighteen months, the people’s spirit remains defiantly optimistic. They will win the war against ebola, and against poverty, if we let them.

The last few months have seen a drama-tic decline in the numbers of cases of ebola virus disease. Sierra Leone now reports only occasional cases which have been rapidly contained. However, the healthcare system still remains fragile, with many of the healthcare professionals having lost their lives to ebola, and many hospitals and clinics no longer functioning effectively.

There is a whole generation of patients who have not been able to access good quality health care over the last 2 years, many of whom suffer from treatable but potentially life-threatening conditions.

I currently work in the Singleton Acute GP unit in Swansea as well as teaching clinical skills to Cardiff medical students, working in the local out of hours service and working as a locum in several practices around Swansea, most recently in Llansamlet surgery.

I am planning to return to Sierra Leone in early 2017 to review the work on-going in the paediatric clinic there.