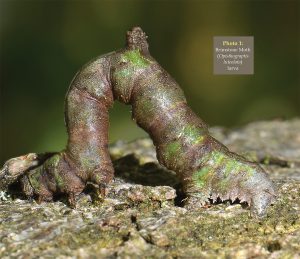 Few other large insects are as commonly overlooked as moths, which is due to their often secretive, nocturnal habits. As a result, they are frequently thought of as drab and boring with few redeeming features aside from their lyrical names, when in reality nothing could be further from the truth. There are 2424 different species of moths in Britain, a good number of which are more than a match for our mere 59 butterfly species when it comes to showiness of shape and colour, and even the less strikingly coloured moths possess intricate patterns of subtle beauty. 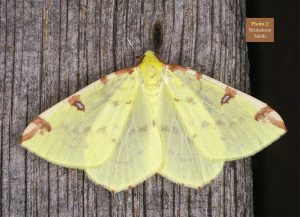 The British macro-moths themselves are further divided into 14 families, the second largest of which – the inter-esting and variable Geometridae (‘earth measurers’) – will be introduced here. The 299 members of this family are known as geometrids or geometer moths and get their name from the curious locomotion of their larvae. These only possess two pairs of pro-legs near the tip of their abdomen instead of the usual five pairs, which causes them to move in a looping manner similar to a person measuring a distance with the span of their fingers. For this reason they are also commonly referred to as ‘loopers’ or  ‘inchworms’. Photo 1 shows a Brimstone Moth larva (Opisthograptis luteolata) mid-step.

While not as unmistakable as the larvae, the majority of adult geometrids can be recognized by the way they rest, with their wings outstretched to the sides, as illustrated by the adult Brimstone Moth in photo 2. Brimstone Moth larvae feed on shrubs in the rose family such as Hawthorn and Blackthorn and are excellent mimics of bits of twig. They even possess a small process on their backs which looks like the remnant of a snapped-off twiglet or bud. The little frills between their pro-legs serve to break up their outline where their body touches the branch (photo 1). 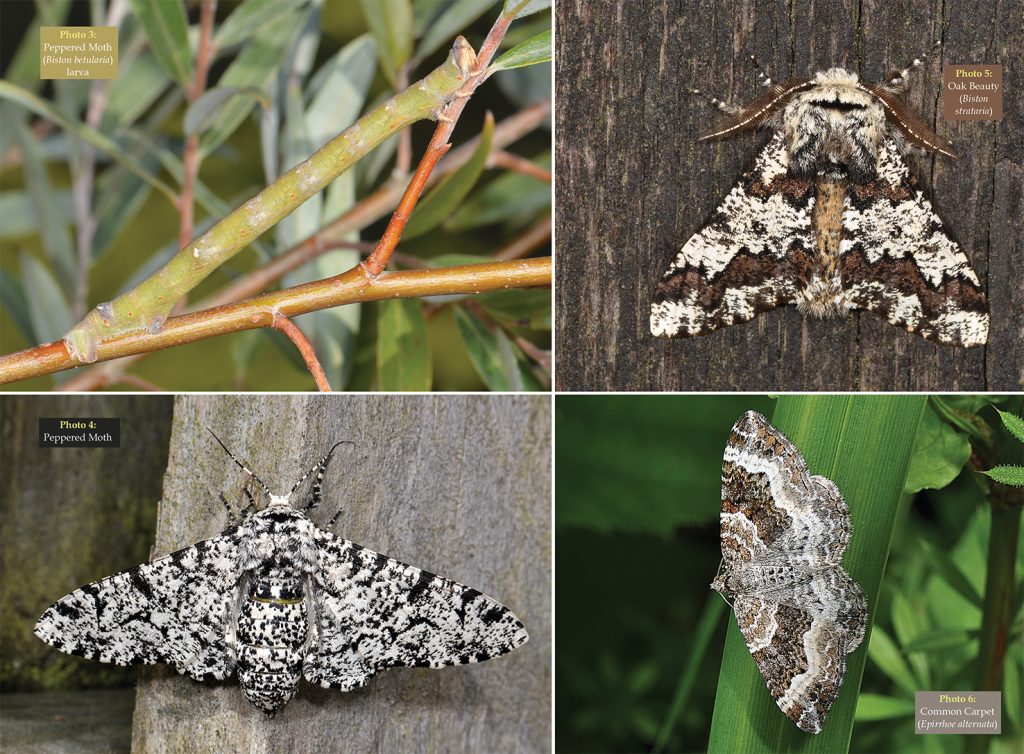 Many other geometrid larvae are similarly well camouflaged and often rest in a stretched out rigid position to perfect the illusion, like the Peppered Moth larva (Biston betularia) in photo 3, which feeds on a range of different shrubs and trees. At first glance, adult Peppered Moths (photo 4) do not appear to be particularly well camouflaged until one realizes that they prefer to rest on light coloured tree bark mottled with lichens. When, in the middle of last century, heavy industrial pollution in parts of the country caused lichens to die off and tree bark to darken, the lighter coloured Peppered Moths became much more obvious to predators and only the darkest specimens survived, giving rise to almost all-black populations in the areas of the worst pollution. As air quality improved, lighter coloured individuals were once again seen in the population.

Other beautiful bark mimics include the closely related, large and impressive Oak Beauty (Biston strataria) (photo 5) whose larvae also develop on a range of tree species (including oak), and the somewhat smaller Common Carpet (Epirrhoe alternata) (photo 6). The latter often finds its way into houses at night when the lights are on and the wind-ows have been left open. Despite its name it does not pose any danger to floor coverings, the name solely based on its appearance not its feeding habits, the larvae being found on bedstraws and cleavers.

The Green Carpet (Colostygia pectinataria) (photo 7) is an exquisitely beautiful lichen mimic, particularly when newly emerged with its green colour still at its richest (it fades somewhat as the animal ages). It, too, depends on bedstraws for its development.

While some geometrids mimic bark and lichen, others imitate dead leaves, for example the elegantly shaped Dusky Thorn (Ennomos fuscantaria) (photo 8) which is often found near ash trees which are its larval food-plants, or the striking Mocha (Cyclophora annularia) (photo 9), whose larvae develop on field maple.

The dainty Purple-bordered Gold (Idaea muricata) (photo 10) lives in heathlands and fens where it blends in with dying foliage as well as with many of the flowers found in its boggy habitat, including those of its larval food-plant, Marsh Cinquefoil.

Other species, such as the Brimstone introduced previously and the Speckled Yellow (Pseudopanthera macularia) (photo 11), are able to successfully pose as very pale dead leaves, but they are also very convincing when they masquerade as sunspots. This is particularly true for the Speckled Yellow, which can often be seen flitting around in its woodland habitat during the day-time, especially when the sun is out. Its larvae feed primarily on Wood Sage. 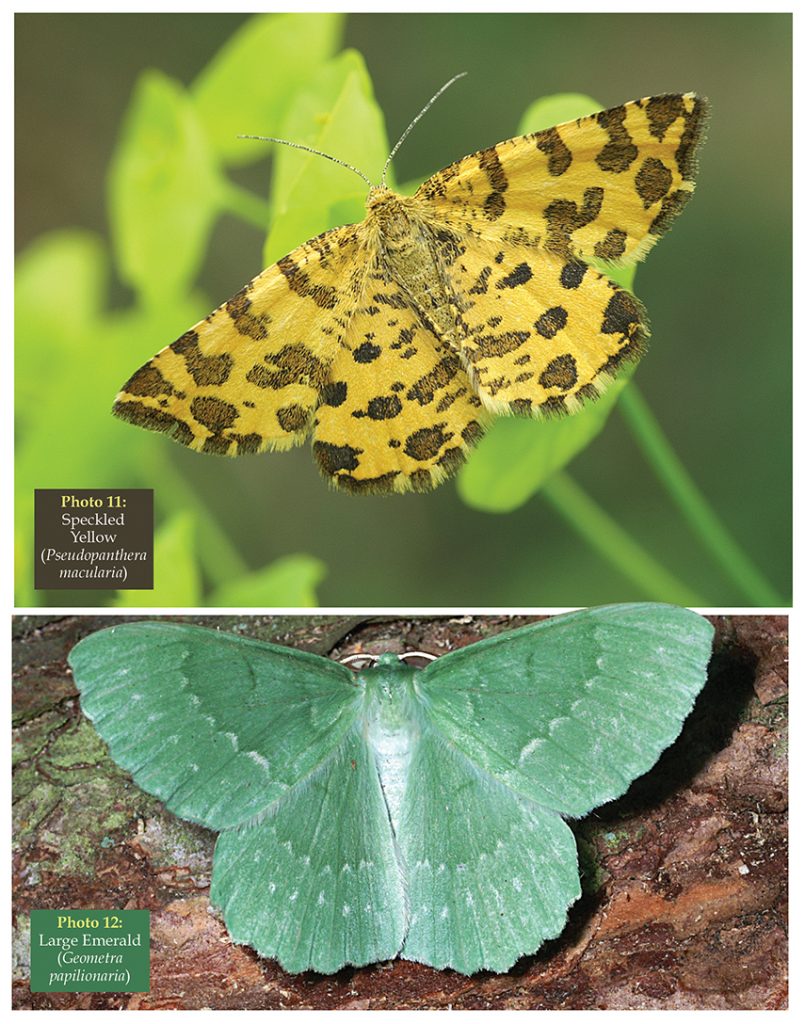 The stunning Large Emerald (Geometra papilionaria) (photo 12) whose larvae usually develop on birch trees, is the largest of several species which are able to copy living foliage with fascinating accuracy.

While most geometrids rely on their sophisticated camouflage to keep themselves safe from predators, the Magpie Moth (Abraxas grossulariata) is an exception. It utilizes distasteful chemicals stored in its body tissues for its defence and advertises their presence to all would-be predators by sporting unmistakeable warning colours during all of its life stages, so much so that even its eggs are bright yellow. The larva (photo 13) and the adult (photo 14) are both black, white and yellow, while the pupa bears strikingly wasp-like black and yellow stripes. 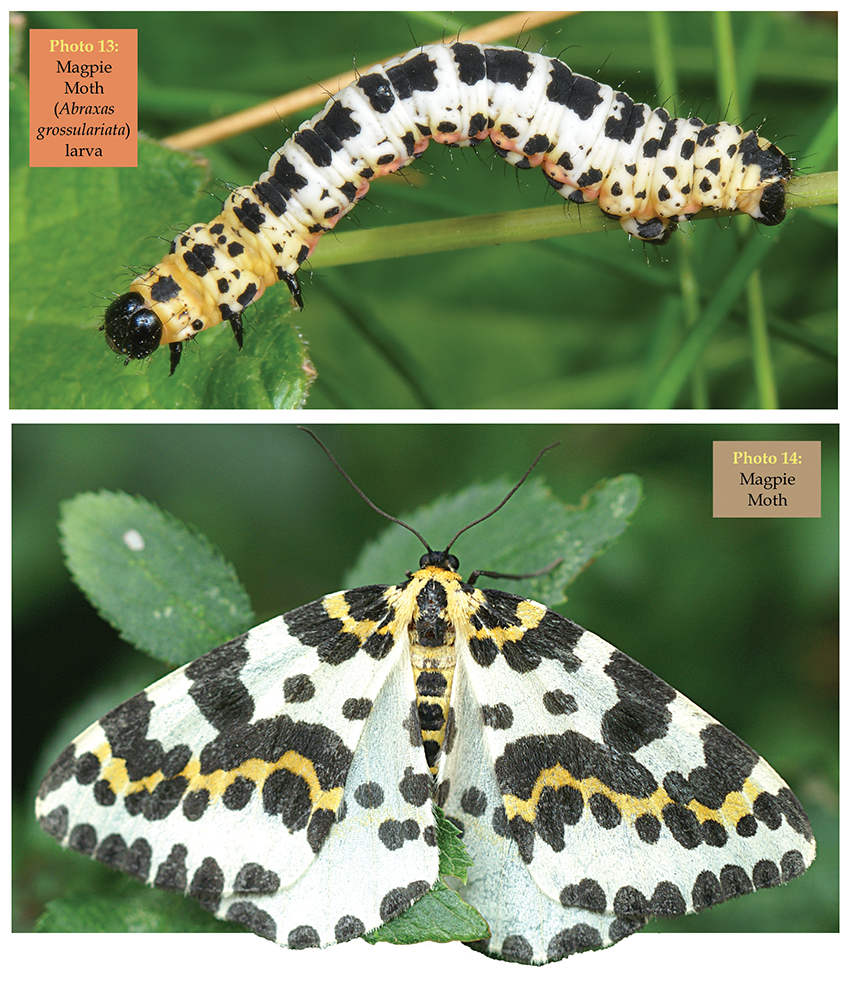 Magpie Moth larvae feed on currant and gooseberry bushes and were at one time numerous enough to be considered garden pests, but nowadays they are rarely common enough to cause any damage. In fact, although some geometrid species are agricultural and forestry pests in other parts of the world, on the whole British geometrids do not cause any trouble as they go about their business and can be unreservedly enjoyed by anyone lucky and sharp-eyed enough to spot one.