She blinded me with science

“An electric motor can stir anything but the soul”

If my memory serves me correctly (it sometimes doesn’t so apologies in advance) that quote comes from Stephen Bayley’s brilliant book Death Drive. In it, as part of his conclusion, he argues that the motor car as we know it is in historical decline, and that “without internal combustion, cars can have no heart”. As someone who’s happily had his soul stirred by the sound of a multi-cylindered engine on many an occasion, and in certain cases driven many miles in order to have it done so, I agreed with him entirely. Then, I drove the BMW i8. 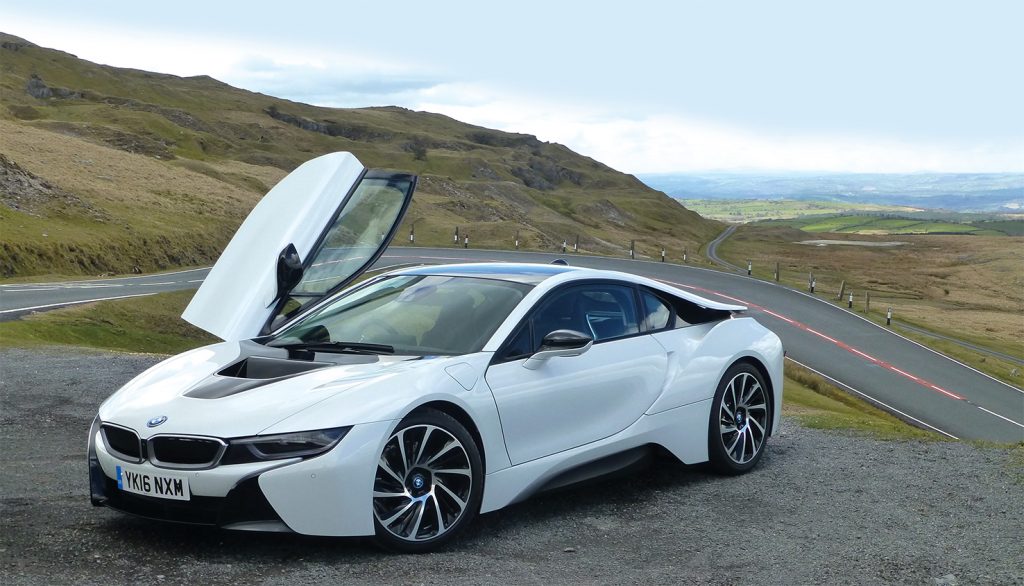 One look at the i8’s heavily sculpted, sci-fi-like body might be all it takes to convince you that there’s a high capacity V8 or something similar lurking under its slinky rear window, but you’d be wrong. BMW’s 21st Century supercar i8 is a plug-in hybrid, and that means, in town at least, it’s powered by an electric motor. There is a petrol engine too, but the truth is despite those jaw-dropping looks, the i8’s engine has just three cylinders and, at just 1,499cc it’s no bigger than the one you’ll find in your mum’s MINI Cooper. It is turbo-charged though, and it does produce 228bhp.

That mighty little triple powers the rear wheels, whilst the separate electric motor which sits in the i8’s nose provides power for the fronts. As a combination they provide the i8 with four-wheel drive and a combined torque output of 420lbft. To put that in perspective, that’s more than an Aston Martin V8 Vantage. The i8’s also quicker than a Porsche 911 when it comes to the 0-60 dash too.

Needless to say that’s impressive stuff but perhaps what’s even more impressive are the i8’s eco-credentials. BMW claim official consumption and emissions figures are 135mpg and 49g/km CO2 respectively. As a result the i8’s also congestion charge free, VED (that’s what your tax-disc is/was) free and, has a BIK (Benefit in kind) rating of just 7% – that’s lower than some of their middle-management orientated saloons. 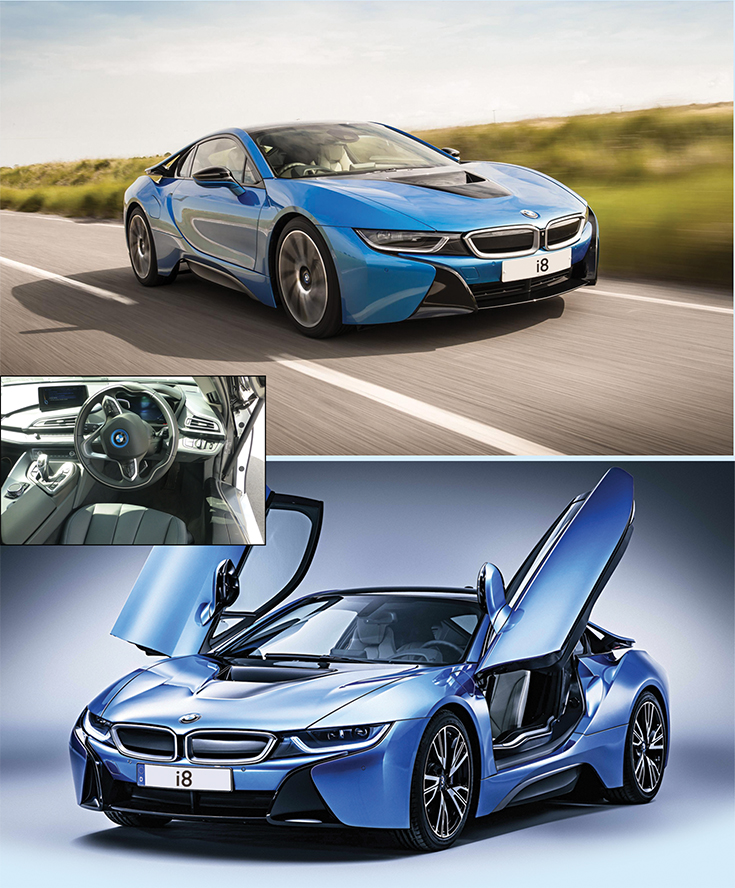 First: the I8’s interior feels strangely familiar. It utilizes the same sat-nav screen, i-drive control, gear selector and various other switchgear as found in a host of other BMWs. That’s fine with me, BMW’s switchgear always feels like it’ll last a lifetime.

Second: there’s no noise at all when you press the start button, pull the selector back in to Drive, and pull out into the traffic. That’s because at lower speeds the i8 runs off its electric motor alone, and can do so for a distance of up to 23 miles. Hence that zero congestion charge. You’ll notice the A-pillars are quite thick too, especially at junctions.

Third: Everybody is looking at you. Drive an i8 down the High Street or stop at the lights and you’ll be sure to get attention. Camera phones come out, people point and stare. It’s as if you’ve just landed from another planet. When you move away and there’s no accompanying noise their astonishment continues.

But it’s when you’re away from the crowds and when you’ve pushed the selector over to the left and in to Sport, that the i8 really comes into its own. The driving positon is excellent, the ride taut. Because BMW have constructed the i8 using the lightest, and strongest materials whilst also applying the most advanced techniques they could, the i8 also feels responsive and accurate. OK, so the steering may be a little light for some tastes – it’s more GT than sportscar – but overall the feeling is one of agility and poise. In Sport mode, the i8’s engine also comes in to play, literally. 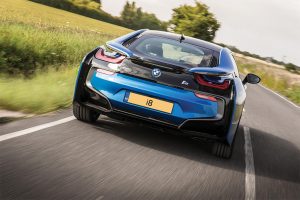 You never feel the transition between electric and petrol driven drive, but you do hear it. The engine noise is pumped into the cabin via the speakers, but rather than sounding like a washing machine as you might have expected, the BMW boffins have made it sound like a straight 6. It’s a little artificial, but it is a nice touch. The brakes too are superb, you’d never know that there’s a regenerative element to them that helps recharge the i8 battery, they just feel firm, normal, powerful, and perfectly natural.

Plug-in hybrids have never really convinced me before and, with the i8 as with all of those I’ve encountered up to now, I’ve no doubt that even if you were to drive it very, very carefully you’ll never get the kind of fuel economy that BMW claim you will. The boot-space and backseats are in many ways little more than token gestures too, especially so in the case of the latter if you happen to be tall. And, if you were to drive an i8 every day – and as long as you’re prepared to pack light and let the children take the bus there’s no reason that you couldn’t – in doing so would you feel as though it had in some way lost its undeniable sense of occasion?

Nevertheless, as a piece of engineering, as something to be admired for both its looks and the science and technology that lies beneath them, the i8 takes some beating. No question: BMW’s i8 is definitely the best hybrid I’ve driven so far. If this is what the future holds, count me in!

Many thanks to Catherine at Trainer BMW Swansea for the loan of the i8. www.trainerbmw.co.uk