Charles is a researcher and family historian. If you would like Charles to help you with tracing YOUR family ancestry please contact him at swanseafamilyhistory@yahoo.co.uk.

LAST MONTH CHARLES LOOKED AT INFORMATION GATHERED FROM POLICE RECORDS; HE TURNS HIS ATTENTION THIS MONTH TO THE DARK SIDE OF CRIMINAL RECORDS, THOSE THAT COMMITTED MURDER 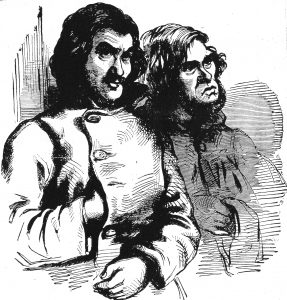 AND HOW CRIME WAS REPORTED IN THE LOCAL NEWSPAPERS.

Swansea prison was a place of execution. Even when the building was under construc-tion, the first execution had been carried out during March 1858, of two Greek sailors, Panotis Alepis and Manoeli Selapatana. The last execution that took place in Wales was carried out in Swansea Prison during 1958, that of Vivian Teed for the murder of a sub-post master in Carmarthen Road, Fforestfach. In total 13 men were executed at Swansea Prison; all are buried in unmarked graves within the prison walls, as was the custom.

We turn our attention to what the local newspaper, The Cambrian reported on February 14th 1908, regarding the first execution that was carried out in Swansea.

Pic right: The Cambrian the ‘first photograph’, an engraving produced by one London firms, of prisoners, Panaotis Alepis (left) and Manoeli Selapatane (right) as sketched by the talented artist R. Jefferies Esq.“

“Greek Sailor’s Murder” – “Old Swansea” – A Greek sailor named Metraphanio was murdered by two Greek seamen named Selapatana and Alepis at Swansea on February 16th, 1858. The trial took place on 27th Feb and then execution on Saturday March 29th, 1858. The hangman being Calcraft. The scaffold was erected south of the goal, opposite the infirmary and union house as they then existed. An incomplete file prevents us from supplying the exact site of the actual crime. “The Cambrian” published a special edition on the morning of the execution, illustrated with wood cuts of the two men”.

Looking back on the actual extract from The Cambrian dated March 26th 1858, with accompanying ‘photograph’ on what happened during the February execution.

“The Execution. The last scene in this dreadful tragedy has now been enacted – the chief actors in this drama of real life have paid the penalty for their evil deeds by having their lives sacrificed upon a public scaffold, in the presence of thousands of spectators. The prisoners savagely attacked their victim with daggers and other murderous weapons, inflicting ghastly and hideous wounds….to secrete their bloody acts, they threw the body into the canal. The trial was heard before Baron Bramwell (George Bramwell), at the Glamorganshire Assizes, on 26th February. The day of the execution, the thick fog of the previous fog had passed away – the sun shone forth brightly and there was a cloudless sky. The scaffold had been erected the previous evening, was placed to the south-west of the building – immediately at the angle opposite the Infirmary and Union House. [The prisoners] retired to rest between eight and nine o’clock, and apparently slept soundly until about 12. From this time until 8 they were preparing for their doom. They partook their last meal about 5 o’clock the previous evening. In attendance were Rev E. B. Squires, chaplain of the goal, High Sheriff, the Deputy Sheriff, the Rev. S. Davies, the Rev. E. G. Williams, Mr Hall, Surgeon, Mr Wood, Governor of the goal.

At the drop they [prisoners] were met the gaze of that vast throng, 18,000, upturned faces – themselves the object of attraction. The prisoners then stepped under the fatal beam. Calcraft (public executioner) carried out his deeds. The clock in the distance was heard to toll the hour of eight. Precisely as the last sound was given, the fatal bolt was drawn. After the bodies had been suspended the usual time, one hour, they were cut down and buried within the precincts of the prison” 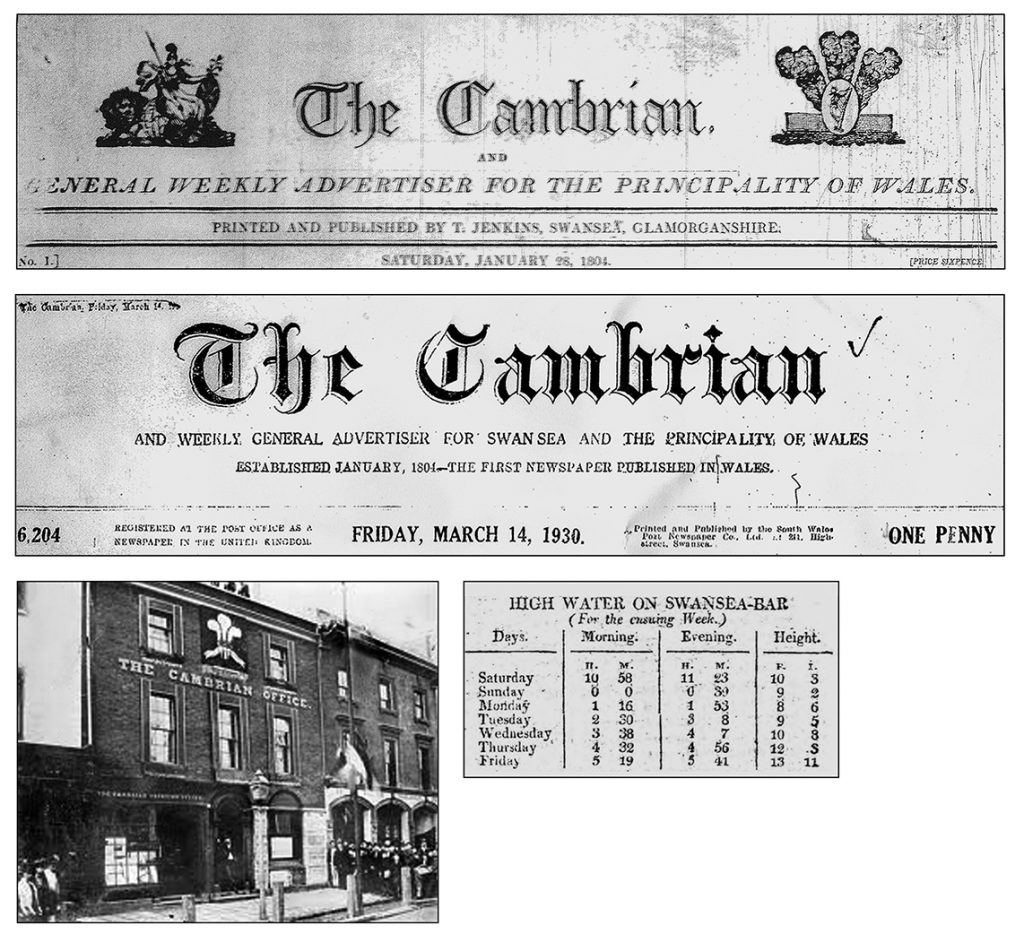 The premises of The Cambrian, Wind Street, Swansea.  Amazing how the people have cleared the way of the photograph to be taken.

What information does The Cambrian provide?

The newspaper not only provides us with a story that is reported but it is also a very good guide to Swansea’s social history at that present time. One bit of advice would be to be very careful that the name of the person has been correctly reported.

What information do we know about The Cambrian?

It was the first weekly newspaper to be published in Wales. It was established by George Haynes and Lewis Weston Dillwyn during 1804, with their premises being located in Wind Street.

The newspaper was to help promote Swansea’s com-mercial growth. The content of the newspaper was to include local and general news, also including mining, agricultural and commercial interests. Circulation of The Cambrian was around the principal towns of South Wales, the West of England, also in America, India and the British Colonies.

In the article, To The Public, The Cambrian illustrates what the aims of the newspaper are, the article reads “………we shall faithfully record the proceedings of the Legislature, and all important decision in the Law Courts; the prices of the London Markets……Independence and Impartiality shall be our basis – Truth our guide.”

The article continues “Intelligent Agents have been appointed in the chief town of Wales to forward regular accounts of the arrival and sailing of shipping”.

It seems that even Dillwyn and Haynes had problems at the start of their publications, when the sloop under Captain Diamond, carrying their printing materials was delayed by bad weather before arriving at Swansea on the 6th January, taking a further 6 days before they could get their equipment situated in their premises. It seems that printing was a problem even back then!

This is where it becomes a little tricky. How would you know if your family ancestors have been mentioned in a story? Well in short, initially you won’t. There is an online database, Swansea – Cambrian Index Online, www.swansea.gov.uk/cambrian, covering from the period from 1804 – 1881. Once you have found the entry on the database, it won’t be the whole story, you would have to use the micro-films housed in the library. Each year of the news-paper is represented by a microfilm. It would mean going through the whole year to find the required article. Printouts can be made for a small fee.

If you feel there is a story, and it isn’t on the data-base, well there is no simple solution, only hours of trolling through the papers!

The Cambrian lasted for 126 years, let’s hope TheBAY lasts just as long! The final edition of The Cambrian appeared in March 1930, when it merg-ed with another local newspaper and became the Herald of Wales.

Just for fun……The first ‘Family Announcements’ were the marriage of Charles Smith, Esq of Guernllwywith to Miss Barber of Swansea, and the death of John Vaughan of Golden Grove, Carmarthenshire.

Those who read with interest the Tide Times published in TheBAY, The Cambrian did the same, for all those Victorian surfers. 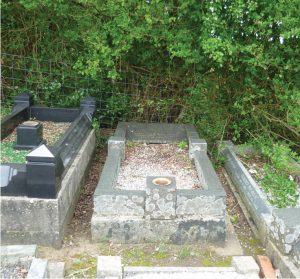 In my piece in June I wrote that Brand, a German pilot was found on Rhossili Beach, April 1943 after he along with his fellow crew members of one of the Domier 217 that flew in the last bombing raid of Swansea of the Second World War, was shot down and crashed into the sea off Port Eynon. He was finally buried at St. Hilary’s Church, Killay and I was led to believe that he was buried by the church hall. Mr David Morgan, Eucharistic Assistant at St. Hillary’s Church, informed me that Kurt Brand was buried in isolation next to the churchyard’s boundary. Brand’s remains were exhumed in 1963 on 19th April and re-interred at the Cannock Chase German Military Cemetery, Staffordshire. The grave was not left for too long before it was reused on 30th April.

Pic above: Location of where Kurt Brand’s grave would have been by the churchyard’s boundary. With kind permission of St. Hilary’s Church.