Welcome to this month’s Bird Watch. I’m one of two Ambassadors for the British Trust for Ornithology’s (BTO) Garden BirdWatch Scheme in South Wales. Each month I introduce you to a bird or other animal that you might see in your garden. 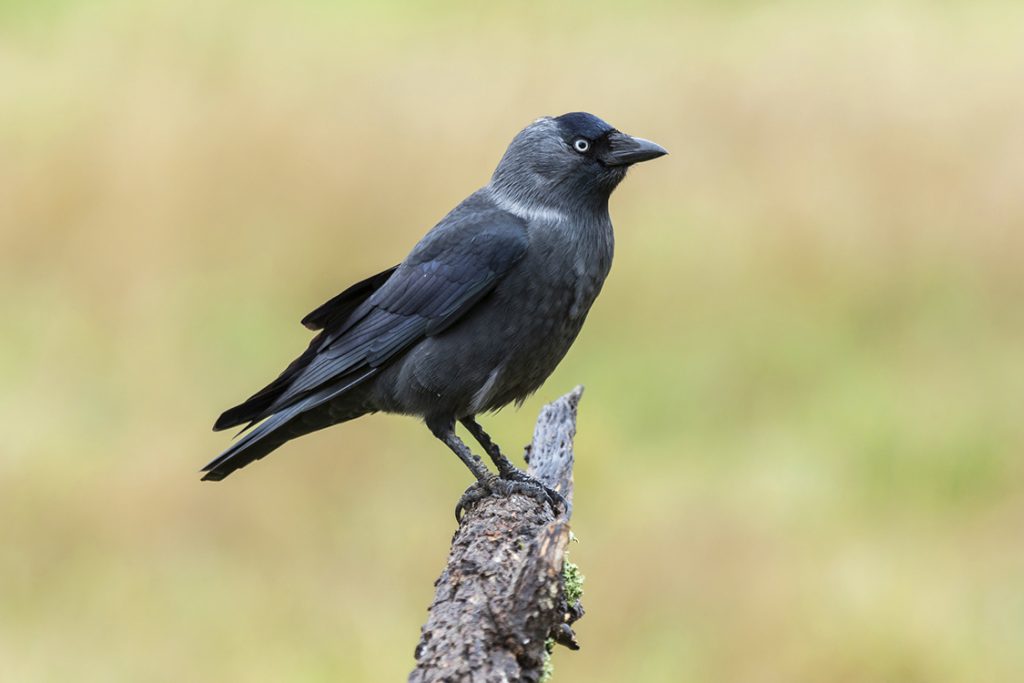 Jackdaws are gregarious members of the crow family and can often be seen feeding alongside the much larger rook on arable farmland. About the size of a pigeon the plumage is black with a silvery grey neck; the beak and legs are also black. Adults have piercing ice-blue eyes, whilst the eyes of juveniles are brown. Jackdaws are faithful partners and will remain together even if breeding attempts are unsuccessful in successive years; pairs usually become more successful with age. Four or five eggs are laid but unless there is an abundance of food it is unlikely that all the chicks will survive. One of the reasons for this is that the eggs hatch asynchronously, meaning that incubation begins before all the eggs have been laid and thus the first chicks that hatch will be bigger and stronger, than subsequent siblings, and receive more food. Jackdaws are noisy birds and you will often hear them making their distinctive ‘kjack’ call, particularly around their communal nesting sites. Jackdaws attract both public affection and notoriety because of their tendency to nest in chimney pots.

Did you know? A tame jackdaw was trained by Italian thieves to steal money from people using cash machines.The sentence “Jackdaws love my big sphinx of quartz” is a pangram (i.e. it contains all 26 letters of the alphabet).The collective noun for Jackdaw is a ‘clattering’ or ‘train’.

The Welsh name is Jac-y-do.

How to attract them to your garden: Jackdaws will eat invertebrates from the surface of your lawn but will also happily take seeds or fat from your bird table (you might need to get up early to see them though as they tend to visit gardens first thing in the morning!).

Conservation status: Green (no cause for concern). The population has increased since the 1960s.

BTO Garden BirdWatch data show that jackdaws are more likely to be seen in gardens in July than at any other time of the year. Half of garden birdwatchers in Wales report seeing jackdaws, compared to only 23% in England.

Make Your Garden Count! If you enjoy watching the birds and wildlife in your garden why not take part in BTO Garden BirdWatch – the largest year-round survey of garden birds in the world? Please contact me for a free enquiry pack or to book a talk.