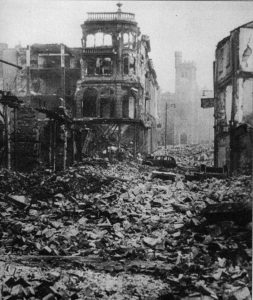 Regular reader Charlotte Thomas got in touch after reading about the Three Night Blitz in the February issue of TheBAY. Her grandfather Haydn Thomas has many memories of this time and Charlotte felt that unless these reminiscences are documented, they will be forgotten. Here are some recollections from Haydn who is now 88 years old and has taken up painting as a hobby, see some of his work below.

“When I was a boy during the war, I worked for a high class shipping grocer, called Mr Watts, whose shop was on Fabian Street. Mr. Watts had a distinctive white moustache. I used to deliver the goods to the customers for him, and replenish stock for the store by cycling up St Mary’s Way to pick up boxes of margarine, and things like that. I enjoyed my work with Mr Watts. But it suddenly came to an end during the blitz of 1942, when the whole of Fabian Street – which was full of shops and things – was completely destroyed, including Mr Watts the grocers’. And I lost my job! I was really disappointed with that. I’m sure Mr Watts felt it even harder than I did!

I also remember we had a neighbour, where I was growing up in St.Thomas. Her name was Mrs Pitt, and she must have been in her late seventies. When the bombing was on, she’d want to go up to her sisters a few hundred yards up the road. I had a steel helmet from somewhere – I don’t know where I got it from, the only thing I can put it down to was that my father was in the home guard – and I would put on this steel helmet, and then take her up to her sisters. And I remember another neighbour during those three nights, back in 1942, the 19th, 20th and 21st, when the town was red, ablaze. We lived in number 15 Benthall Place then, and our neighbour down the road was out on the street shouting ‘it’s the end of the world!”. My father just said ‘shut up you fool, and get in!’ But there was bombing apart from the blitz, light bombing all through the war. And everybody just got on with things.”