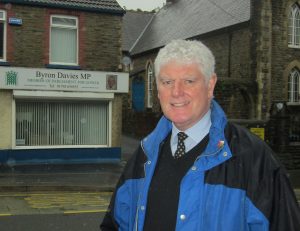 Just over a year ago, I stepped off a train in Paddington and headed to the Palace of Westminster to take my seat as the newly elected Conservative MP for Gower.

Arriving at this awe inspiring building – the home to the Mother of Parliaments – was extremely humbling.  Just think of the political giants who strode through its halls and debated in its chamber – from Sir Winston Churchill and Lloyd George to Disraeli, Gladstone and Sir Robert Peel. Between them – and many others – they shaped this country into what it is today.

My first week passed in a whirl of training sessions and seminars as I was whisked literally around the miles of corridors. Getting lost was a frequent event although I have finally managed to master the intricate geography of a building that includes Westminster Hall where the trials of both Sir Thomas More and Anne Boleyn were conducted.

History is all around us at Westminster – and lives on within the many rituals that take place. Every day there is a procession where the Speaker leaves his apartment and walks through the Palace to the Commons to conduct the business of the house.

I have now attended two state openings which are redolent of ritual but behind the façade of pomp and splendour, parliament has a crucial role. As MP’s, we scrutinise all the legislation that passes through. Many of us sit on bill committees which entail going through new bills literally line by line – and making amendments where necessary.

There are also select committees to which MP’s are seconded and which investigate a whole range of issues – calling in witnesses to give expert testimony. Their reports are extremely influential and can be the trigger for change.

Much of the time, the action takes place away from the main chamber which is why voters complain that the green benches are often half empty. But we are not sunning ourselves on the terrace – we are either sitting on one of many committees, receiving delegations, dealing with constituency matters or attending events within Parliament.

Back home, there are always surgeries, meetings and events to attend.

While being an MP can be very tiring at times, it is also immensely rewarding. I am conscious every day of the honour of being Gower’s MP and I am determined to do everything I can to promote and safeguard the constituency and its people.