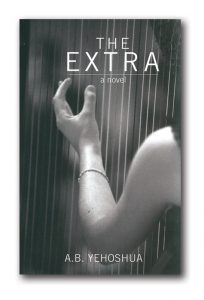 The Extra by A.B. Yehoshua

Translated from the Hebrew by Stuart Schoffman (Halban £12.99)

Israeli novelist A.B Yehoshua is something of a media darling in Britain, regularly featuring on high brow arts and serious news programmes. Yehoshua belongs to the select group of grand old men of contemporary world literature translated into English, who are revered and reviewed worldwide, including in this column: we have brought you novels by – to name a few – Italo Calvino, David Grossman, Mario Vargas Llosa, Gunter Grass, Umberto Eco, Aleksandr Solzhenitsyn and other international literary luminaries as celebrated as Yehoshua.

The octogenarian Yehoshua’s new novel The Extra looks at the intricacies and the implications of the life led by his protagonist Noga, an Israeli harpist in a Dutch orchestra, who returns to Jerusalem for three months to support her newly widowed mother’s experimental sojourn in sheltered accommodation.

Noga (Hebrew for Venus) lives in her mother’s spacious rent-controlled Jerusalem flat among orthodox Jews, safeguarding the property till her mother makes a decision. To make it easier for him to keep a close, loving eye on his mother, her son Honi wants her to move nearer to his home in Tel Aviv.

In order to occupy herself and to earn some spending money, Noga embarks on a stint as a film extra, employment arranged by her brother Honi whose media connections provide a speedy entré. In the course of these cinematic adventures, Uriah, the husband who divorced Noga because she did not want children, returns to her orbit, complicating her life further.

Yehoshua’s narrative portrays modern life in Israel in a novel that is non-political and non-ideological. The characters are precisely drawn, each player — including the orthodox Jews in Noga’s Jerusalem neighbourhood — revealing a recognisable and unforgettable aspect of humanity.

The Extra examines universal themes of family relationships, filial loyalty, marital discord, feminism and professional ambitions in the context of a contemporary Israel where politics are peripheral and religion remains a backdrop, neither distorting the action nor the players in the main narrative.

The Extra is a novel of great originality, “… a metaphor for humanity, and we are all extras in its story without knowing if a credible and satisfying resolution awaits us at the end.” 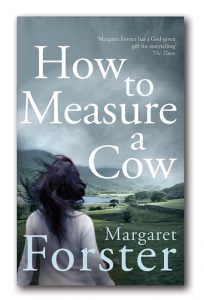 Margaret Forster died of cancer in London in February 2016, mourned by readers the world over.

Ever since she burst onto the English-speaking literary world with the epochal Georgy Girl (made into a hugely successful film and a Top Ten hit song by the Seekers) she has enlivened generations of readers with a succession of highly original, quintessentially British novels. Forster’s protagonists, are quirky, prickly and not necessarily likeable — but are easily recognisable in a British context and quite unforgettable.

In Forster’s posthumously published new novel How to Measure a Cow, the protagonist Tara Fraser is a young woman with a past. Through a painstaking description of Tara’s experiences, Forster examines the volatile nature of female friendship and probes into the origins of aggressive and difficult behaviour. Tara has endured a largely self-inflicted traumatic experience. To forge a new identity and shake off her past, she changes her name to Sarah Scott and moves to a remote northern town of Workington, selected by the random sticking of a hair clip onto a map of the British Isles.

Tara seeks her old school friends to help with her rehabilitation, but finds her elderly and uptight neighbour Nancy more accessible. An intriguing relationship develops between the archetypical repressed Northern widow and the feisty young Londoner, as the secrets of Tara/Sarah’s lurid past unfold.

Margaret Forster always brought something fresh to the literary table. Hers is an illuminating view of unpredictable mankind and shifting value systems that reflects our society with humour and affection. 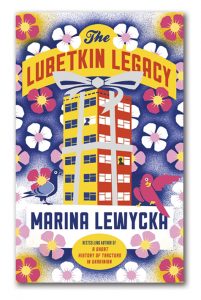 Marina Lewycka writes once again of East European immigrants making a life in London, enchanting readers as she did before with her extremely funny debut novel A Short History of Tractors in Ukrainian.

The Lubetkin Legacy is so entitled because Lewycka’s protagonists live in social housing designed by the gifted urban architect Bertholt Lubetkin. They are a volatile multi-racial group of misfits trying to cope with the rigours of recession, struggling with the world of austerity supervised by the arch villain ‘Indunky Smeet’ as the minister for Work and Pensions Ian Duncan Smith is known to the Middle European denizens of Lubetkin’s Madeley Court.

Our hero Bertie Sidebottom is named after the architect his mother Lily Lukashenko revered. On her death, Bertie re-organises his life, sharing the flat with the parrot Flossie and Inna, an elderly Ukrainian widow who introduces Bertie to the culinary delights of golabki, yuksha and slatki. As part of a cunning ploy to dodge the bedroom tax, Inna masquerades as Bertie’s dead mother.

Lewycka illustrates the farcical situations that arise when the tenants battle with bureaucracy with hilarious consequences. Not all can deal with the mad logic of the DWP, however, and poor disabled Legless

Len dies in the attempt. Violet, the black high-flier temporarily living in a student flat, works in a high-profile job in the City, where she soon recoils from the horrors of dodgy off-shore deals, evil tax avoidance structures, and venal

recipients of international aid. Lewycka portrays nightmarish situa-tions in this pastiche of contemporary London life with great vitality and a high humour. She definitely takes her place among the best of comedic writing in English today. 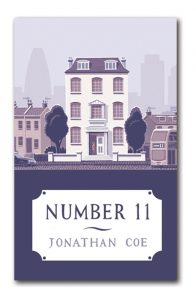 In contrast, well-known British novelist Jonathan Coe takes a more serious view of modern London in the context of the political state of Britain today. In his new novel Number 11, Coe uses a time-honoured creative vehicle, illustrating his version of life in London via the story of two friends—white middle-class Rachel and black, lesbian, disabled Alison. The latter stereotype is avidly sought by vicious tabloid journalist Josephine Winshaw-Eaves as a living example to support an expose she is writing.

Number 11 is presented in the form of five novellas linked by a theme. The theme is unsurprisingly the number eleven, which appears throughout the narrative, in the course of which Coe takes a literary swipe at super-rich lifestyles and corporate greed vis a vis extreme poverty and a struggling middle-class. He writes with humour and a pacy easy style, even supplying a frisson of horror when a posh basement extension in Kensington yields lethal secrets.

Number 11 is Coe’s eleventh novel and is a commendable work, taking its place in the pantheon of contemporary English literature as a credible mirror of the times.