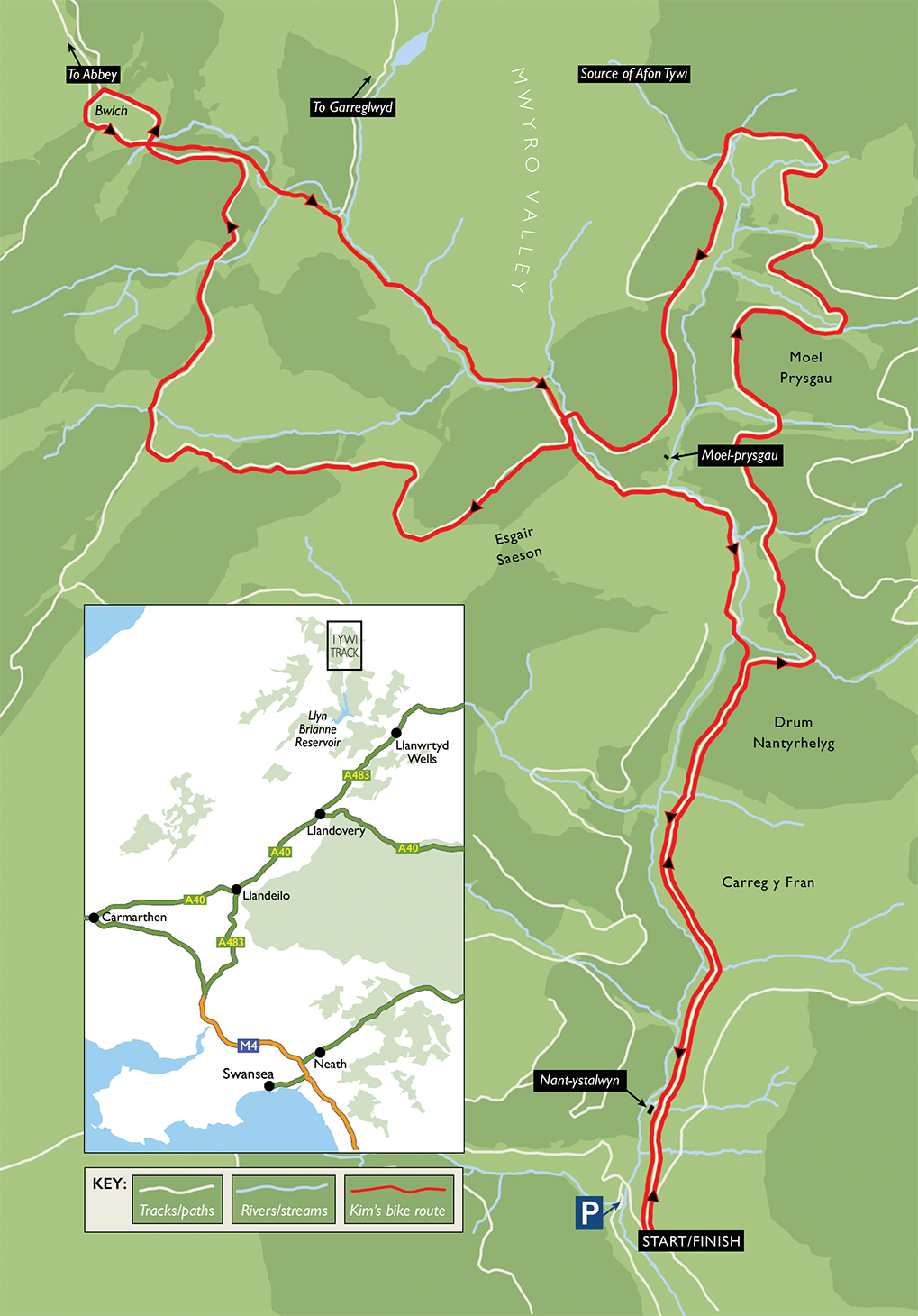 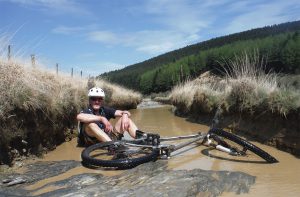 It’s odd the thoughts that cross your mind when sitting in a puddle. Once over the initial shock and after the pain has subsided, if the sun is shining one finds oneself adopting an almost contemplative air. Why at the age of 54 am I sitting in a puddle? Do rain drops reach terminal velocity as they fall to the ground? Does this water feel any different to the bath water at home? Now that last thought isn’t as crazy as it sounds because adjacent to my puddle is the upper reaches of the Afon Tywi which flows into the Llyn Brianne reservoir.

Some way downstream of the dam it travels via an impressive pipeline and supplements the waters of the lower Lliw valley reservoir before finally coming out of my taps!

Trying to stay dry on this ride is futile, you will get wet, very wet. How wet depends a certain amount on your skills as a rider but largely on Lady Luck, so choose a warm sunny day, ride with some good friends and don’t forget to take a camera. At only 24km, more than half of which is on forestry tracks, this ride doesn’t require a great level of fitness, however a good sense of humour is essential and if you’re hungry for more there’s a huge plantation to explore with some great hidden gems. Don’t be put off by the thought of the forest stretches, as unlike the usual conifer woodland the riding is quite pleasant, periodically offering some wonderful views across the mid Wales countryside.

Having enjoyed the meandering drive around the Llyn Brianne reservoir, turn right off the road, drive through the gate and park in front of the spoil heaps at SN 804 569 (OS 147). Your vehicle will be perfectly safe here, I’ve often left mine for days on end, once returning to find it completely buried in snow! Keep to the lower track and very shortly you’ll pass the old farm at Nant–ystalwyn which is built on a huge limestone slab and is currently undergoing some much needed restoration work. Adjacent to the track are some remarkable old trees which look like they’ve just stepped off a set in Lord of the Rings, I always slow down here and keep an ear out for a rather deep voice offering to carry me up to bwlch! Shortly after you’ll spy your first stream crossing, the first of many but a mere taster of what is to come. 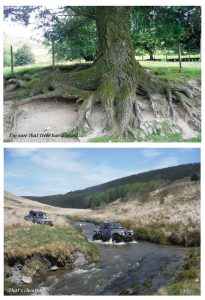 This track is classified as a BOAT – Byway Open To All Traffic – (rather appropriate!) and sees a lot of 4wd traffic. Most of whom I’ve come across have been very friendly and on several occasions have often been kind enough to unburden us of our bags of coal and deposit them near the bothy for our overnight stays, saving us the trouble of hauling them up. However some aren’t and are completely reckless in both their driving and their apparent lack of concern for the environment.

I despair at the sight of Land Rovers being winched out of a river depositing all sorts of pollutants into the water, some of which may ultimately flow into the reservoir. This has led to many sometimes hostile confrontations as mountain bikers and off roaders once again fail to see eye to eye.

Stick with this track enjoying the water splashes before turning off into the forestry at 808 596, this is a fairly obvious right hand turn 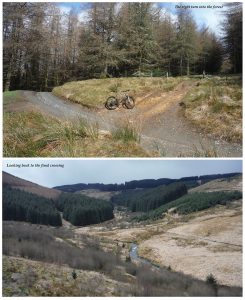 which after an initial short rutted section takes you onto a well surfaced forest road. If you find yourself looking at a river crossing you’ve missed it and gone too far. Many years ago I found myself in this position and being both too lazy to climb back up the hill and conscious of the pressing darkness I remember thinking to myself ‘Oh it’ll be fine’. As if he had read my mind my collie Spike looked up at me as only a dog can, as if to say no it won’t! The rain had been falling for 2 days and the river was uncomfortably high. ‘Go on Spike, in you go’. He walked away from the river looking back at me in disgust before turning round to take a quick run up, launching himself into the air he landed midstream only to be immediately swept down river before managing to scramble out some 30 metres below. The dog was right, it clearly wasn’t fine. Some 5 minutes later having finally managed to persuade him to come back across I backtracked to pick up the forestry road, the dog trotting a comfortable distance behind me in case I should make any more rash decisions.

Enjoy the forest road as it twists and turns, rises and falls and passes very near the source of the Tywi. If time is on your side drop down the path which leaves the road at 805 611, this will take you down to Moel Prysgau, my favourite of all the Welsh bothies. I’ve spent many a night here both on my own and with good friends – to see a full moon as it rises opposite the bothy door on a clear winters night is one of life’s magical moments. One night I’d wandered down to the stream to fill my water bottle when the dog ran off which was most out of character for him. I called several times before he returned, something had clearly spooked him. Dismissing any unwanted thoughts from my head, after all your own imagination is your worst enemy, I walked back to the bothy and opened the door. The dog wouldn’t go in. I picked him up putting him down just inside but as soon as his feet touched the floor he bolted out of the bothy and shot past me. I called him back and grabbed his scruff. My mind was racing, what could be in there that had frightened him so much? As all my kit was in the bothy and it was way past midnight I had no option but to go in. Turning on my head torch and keeping hold of the dog, I walked in, quickly shutting the door behind me and scanned the room with my light. It was empty and with a feeling of relief, I let him go and opened the door to the snug. The dog froze. Now at this point I must admit to feeling rather anxious and shut the door as I tried to rationalise my thoughts, there can’t be anything in there can there? And if there is, it shouldn’t cause me any undue problems should it? With a sense of trepidation, I pulled the door open and burst in, again scanning the room with my light. Nothing. I had to literally drag the dog into the room but he refused to settle. 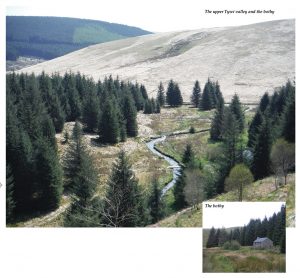 Understandably it took me a while to doze off but once asleep I awoke only when I turned over to make myself comfortable and every time I did, the dog was sat bolt upright staring into the room and he was like that when I got up in the morning. Odd.

Leaving the bothy, climb back up on the path you came down and head on to bwlch where in front of you is a panoramic view of the Teifi valley and should you fancy it a rather good 300mt descent down to the 12th century Cistercian Abbey at Strata Florida. If you choose to ride it, take the old drover’s road not the forest track but remember you have to climb back up, either on the forest road or up the adjacent Mwyro valley before crossing back on a rather vague bridleway from Garreglwyd.

For this article though we’re heading home south east along the Tywi track where shortly after leaving bwlch you’ll encounter your first puddle (puddle??!!!) which is probably best tackled in a small boat rather than on a mountain bike. 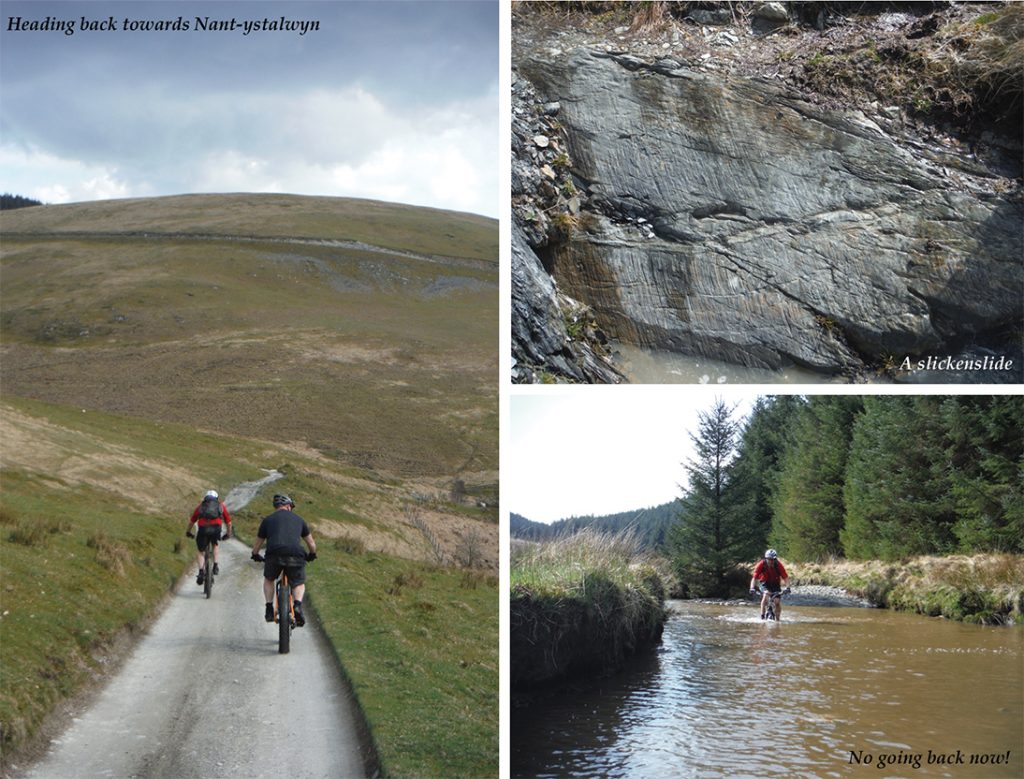 This has the potential to unseat you as it’s rather deep, so stay in a low gear and hope your God is with you; anchors aweigh! There follows a rather riotous 8km ride back through many puddles, some lengthy technical rocky sections interspersed with several river crossings and some very fast double track.

This is mountain biking at its best. A word of caution though, the river crossings are very hit and miss and whilst it’s always funny when somebody takes a swim, it can sometimes be nasty so please be aware of this if one of your friends goes under. The last river crossing (810 601) is particularly tricky and to be honest is better walked as there is a limestone rib running under the water which is very tricky to ride. Shortly after you egress, keep your eyes out for a rather interesting geological feature known as a slickenside. This is the name given to a rock which has a polished and often striated surface caused by movement between the rocks either side of a fault. There is no other evidence of the fault so I’m a little uncertain as to what actually happened here. A short climb takes you into a magical forest stretch and back to where you turned off earlier; you’re now backtracking and in reverse this last section is an absolute blast being both fast and fun. If it’s a warm day you might even dry off a little!

Thanks to Lucas, Sam and the elusive Lawrence at Urban Cyclery.