THIS WILL BE TATIANA’S LAST RECIPE FOR US FOR A WHILE AS HER TIME IS NOW OCCUPIED WITH HER PROPERTY RENTAL BUSINESS IN THE ALGARVE. TATIANA’S HOUSE IS AVAILABLE TO RENT, SIMPLY GOOGLE ‘THE MARMALADE HOUSE, OLHAO’ FOR FURTHER INFORMATION. MANY THANKS TO TATIANA AND HER PARTNER DAVE FOR THEIR SUPPORT IN THE PAST FEW YEARS.

Bow to the king 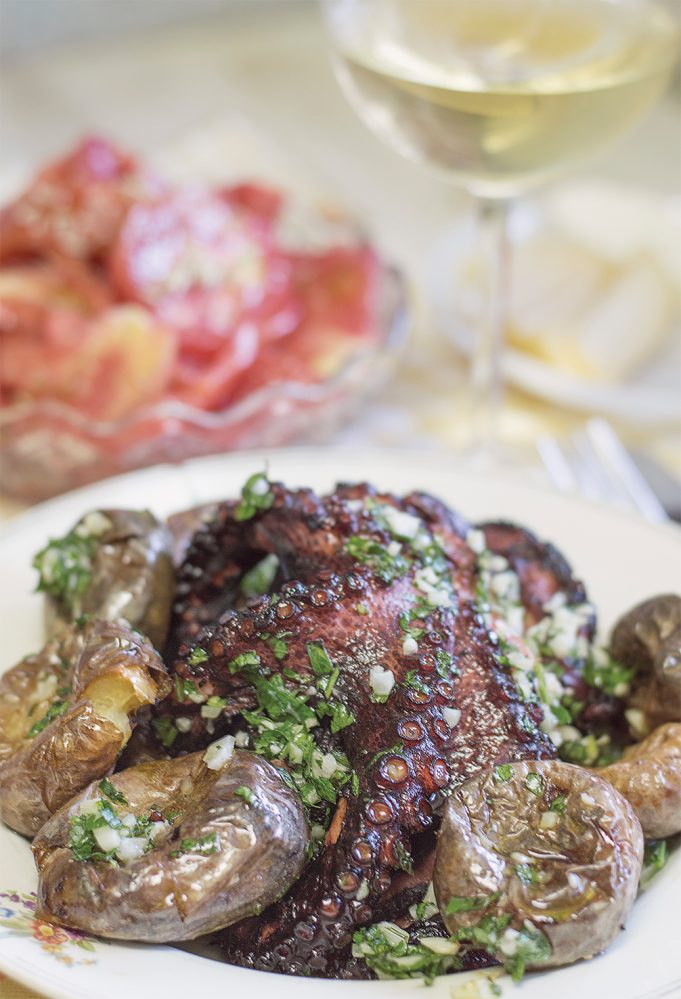 Octopus, or Polvo as it is known in Portugal, is regarded as king. It is abundant throughout the year, inexpensive, versatile and everyone seems to love it. However, it’s not without its issues and cooking a soft octopus is sometimes a bit of a challenge, so here are some fail-proof tricks.

Even though there are loads of recipes that make very good use of octopus, I’ve gone for the roasted version (à Lagareiro) as it’s one of the most traditional ways of presenting it. However the first part of the recipe, the cooking it until soft is common to all octopus recipes. Even if you find a recipe that doesn’t do it I would always add it to the recipe. 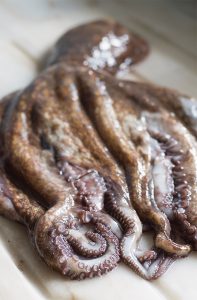 I bulb of garlic, finely chopped

How to choose and prepare your octopus

This is a crucial part of your recipe and what determines if your octopus will come out soft and tender or chewy, so here goes.

Look for a super fresh octopus, these are the ones with a nice pallet of brown colour on their skin, white octopus is old octopus. Bright live eyes and wet looking skin are also signs of freshness.

Avoid big octopuses, up to 2 pounds/1kg is ideal.

Tip #1: The bigger they get, the tougher their flesh is.

To clean the octopus remove the outer skin, that is the one that has the colour, revealing the white flesh underneath. Pull out the beak and the guts through the mouth cavity. This is everything that is under the hood that doesn’t look like the flesh on the tentacles.

Tip #2:  Your fishmonger is more than happy to do this for you, just ask him to still leave it as one piece at the end.

Once you get home, freeze your cleaned octopus for at least 48 hours.

Tip #3:  Freezing softens and breaks down the fibres, making everything softer.

Cooking it until soft

On the day before you intend to cook it take your octopus out of the freezer and let it defrost in the fridge.

On the following day place it in a pressure cooker (or a big non stick pot) and place over a very low flame, without adding any other ingredients, not even water. Cover.

Tip #4: The octopus will release enough water to cook itself.

It will take about 1 hour for a small octopus and 2 hours for a larger one. If you have a normal pan and not a pressure cooker it should take another 30 minutes. To test for softness stick a knife in, it should offer little resistance. Remove from the pan and allow it to cool down.

Tip #5: The octopus will need to be really soft so if it’s not there yet just leave it for a bit longer, make sure that it still has some water in the bottom so it won’t burn.

Wash your potatoes and place them in the oven, on a tray with a good pinch of salt, for 45 minutes. This is the perfect time as your octopus will be cooking nicely.

Tip #6: The timing depends hugely on the quality of your potatoes so check if they are soft after 45 minutes. If they are not, give them a bit more time to cook.

After 45 minutes (and by now your octopus should be getting there) remove your potatoes from the oven. Wrap each one in a clean tea towel and give them a punch so the skin audibly ‘cracks’ and they get slightly squashed, return them to the oven tray and repeat with all the other potatoes.

Now that the potatoes are cracked and the octopus is cooked, it’s time to prepare your sauce.

Grab a bowl and place 4 tbsp of olive oil in it, add the chopped parsley, the chopped garlic, a good pinch of salt and pepper. Give it a mix.

Now it’s time to return to the tray where the potatoes are resting. Make some space in the centre, by pushing the potatoes a little to the side. Place the octopus in the centre and pour the garlic and parsley oil over everything.

Place it back in the oven for another 20 minutes or until its nice and toasted.

Serve immediately with a simple tomato and onion salad.