Our reading group decided to have an away day last month so hopped into the car and drove to Wright’s Emporium in Llanarthne to discuss My Brilliant Friend by Elena Ferrante. The book wasn’t a huge hit with the girls – I use the term very loosely as collectively, just four of us have over 200 years’ reading experience – as we decided there were too many characters and perhaps the essence of the novel was lost in translation. What was a hit was the food and drink on offer at Wrights.

The Golden Grove Arms was originally a pub, and like so many country inns it closed its doors some years ago. Simon Wright, food writer and broadcaster along with his wife Maryann moved in and created a little piece of food heaven.

We arrived a little after midday on a Wednesday to find it already filling up – they must eat early in Carmarthen-shire – or they know that you have to be quick off the mark if you’re going to get a table. While deciding on what to eat, we collectively decided to try out the rhubarb soda – this is produced by an artisan company in East London called The Square Root Soda Works – cue the first of the appreciative oohs and aahs. I’m not usually a lover of fizzy drinks, preferring to stick to water but as a lover of all things rhubarb I was tempted. The label tells that it is made from Yorkshire rhubarb, lemon juice and British beet sugar and its pale pink colour screams “there’s nothing artificial in here!” So taken was I by this new addition to my soft drink repertoire that I contacted the lovely people at Square Root and asked if they would collaborate with us in a competition – they said yes and you’ll find details of how you could WIN a case of their sodas on the following page.

At Wrights the daily specials are written on a blackboard – the emphasis is as you would expect, on locally sourced and seasonal produce. Funnily enough we all plumped for vegetarian options – warm lentil, roast tomatoes, squash and feta cheese – mushrooms on toast – but the show stopper was the vegetable platter. This consisted of a dinky little Kilner jar of hummus, deep fried aubergine with honey, cumin and labneh (this is a cheese made from strained Greek yoghurt, flatbreads, sliced heritage tomatoes (these really do taste like the tomatoes of my childhood), and a beetroot, mint, pomegranate and almond salad that not only tasted heavenly but looked so pretty. There was much passing around of dishes accompanied by more oohs and aahs – the book discussion was long forgotten.

All the dishes on the menu are available to buy to take home and the range of canned goods, spices, breads and deli items is second to none. The conversation on the way home consisted mainly of how we could replicate some of the dishes – should the rhubarb be stewed or baked and did the beetroot salad have pomegranate molasses in it?

I will experiment and report back.

t was another cold, wet miserable July evening and we needed cheering up. Where was summer and was she ever going to make an appearance in Wales? So we did the next best thing and moseyed on down to La Fina in the Kingsway to meet up with friends.

I believe that sharing food is probably the most sociable occupation you can find. What could be nicer than grazing on small plates of food while chatting and drinking good wine? La Fina is predominantly a tapas restaurant with a couple of main dishes on the menu – espetadas – kebabs of marinated lamb or chicken grilled over charcoal, grilled steak or vegetarian cannelloni.

But it really is all about the tapas. There were over twenty different dishes to choose from – these ranged from simple garlic bread to the much more exciting carrilleras al vino, pork cheeks slowly cooked in a rich red wine sauce until meltingly soft, or the cod loin with roasted peppers and a garlicky alioli. There was more fish on the menu – little fish-cakes made with hake and garlic, prawns in a spicy chilli and garlic sauce, fried squid, marinated anchovies and not for-getting the battered Penclawdd cockles – this was a seafood lover’s dream meal.

My carnivorous companions happily nibbled on the albondigas – Spanish meat-balls, chicken in a creamy sauce with brandy and paprika and subtly spicy slow roasted pork ribs.

That’s the beauty of tapas with friends; you get to try all sorts of different dishes without having to commit to a whole plate to yourself. It’s ideal if you don’t have a big appetite – or are fazed by a huge plate of food – you take what you want.

Tuesday night is apparently a popular night to go to La Fina as they offer a 50% discount on their tapas dishes – I would imagine that booking for this feast is essential.

Ed and Robyn started Square Root in 2012 selling Ginger Beer at a local farmers’ market in Harringay. Their customers loved it and so they started to branch out and experiment with new flavours made from seasonal produce – that’s how Rhubarb Soda was born. Very quickly they were producing more and more flavours every week, so they needed to bring in some extra help. 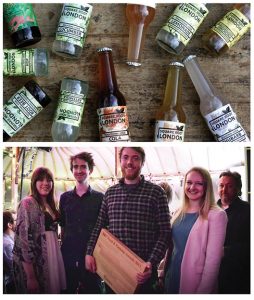 That’s where Elsie came in, a 1920s delivery tricycle which they converted into a mobile bar and started peddling their sodas all around town. After a really busy summer, and lots of requests, it only seemed natural to start putting their sodas into bottles. After a couple of trial runs of their most popular flavours they started selling them through local outlets.

Demand for their drinks grew, so in late 2013, they founded the Square Root Soda Works – their very own production and bottling space based out of a railway arch in Hackney Downs. Since then they’ve gone from strength to strength, but they still, and always will be, made using fresh ingredients, juiced or infused by hand, and all contain around a third less sugar than your average bottle of fizzy pop! The sugars they do add are all either made from sugar beet grown on British farms, or ethically sourced, fairly traded cane sugars produced at source by farmers in Mauritius.

Because the sodas are made from freshly juiced fruit, they retain their whole fruit flavour and always taste of the ingredients they’re made out of, naturally. They like to work with the freshest fruits so rotate the flavours with the changing seasons. Ingredients go in and out of season all the time so they release a new flavour every month to reflect what’s currently out there, and keep it on until the natural season of the fruit ends. They work directly with farmers to get the tastiest ingredients they can find, often taking the wonky or softer fruits that the farmers can’t sell to supermarkets and which usually go to waste.

They go to great lengths to ensure that each and every bottle of soda is the best it can be and to getting the most out of each of the ingredients, so nothing is wasted. This devotion to their sodas was recognised when they WON the 2015 BBC Food & Farming Awards for ‘Best Drinks Producer’ – the first soft drinks company to ever even make it in to the final, let alone WIN this prestigious award.

To enter the competition simply answer the following question:

What is the name of their1920s delivery tricycle?

No correspondence will be entered into.