This month Charles looks at the churches in and around Swansea, and has a ‘just for fun’ ecclesiastical quiz. If you have a question regarding YOUR family history that you would like to put to Charles, he can be contacted at swanseafamilyhistory@yahoo.co.uk – he’d be delighted to hear from you. 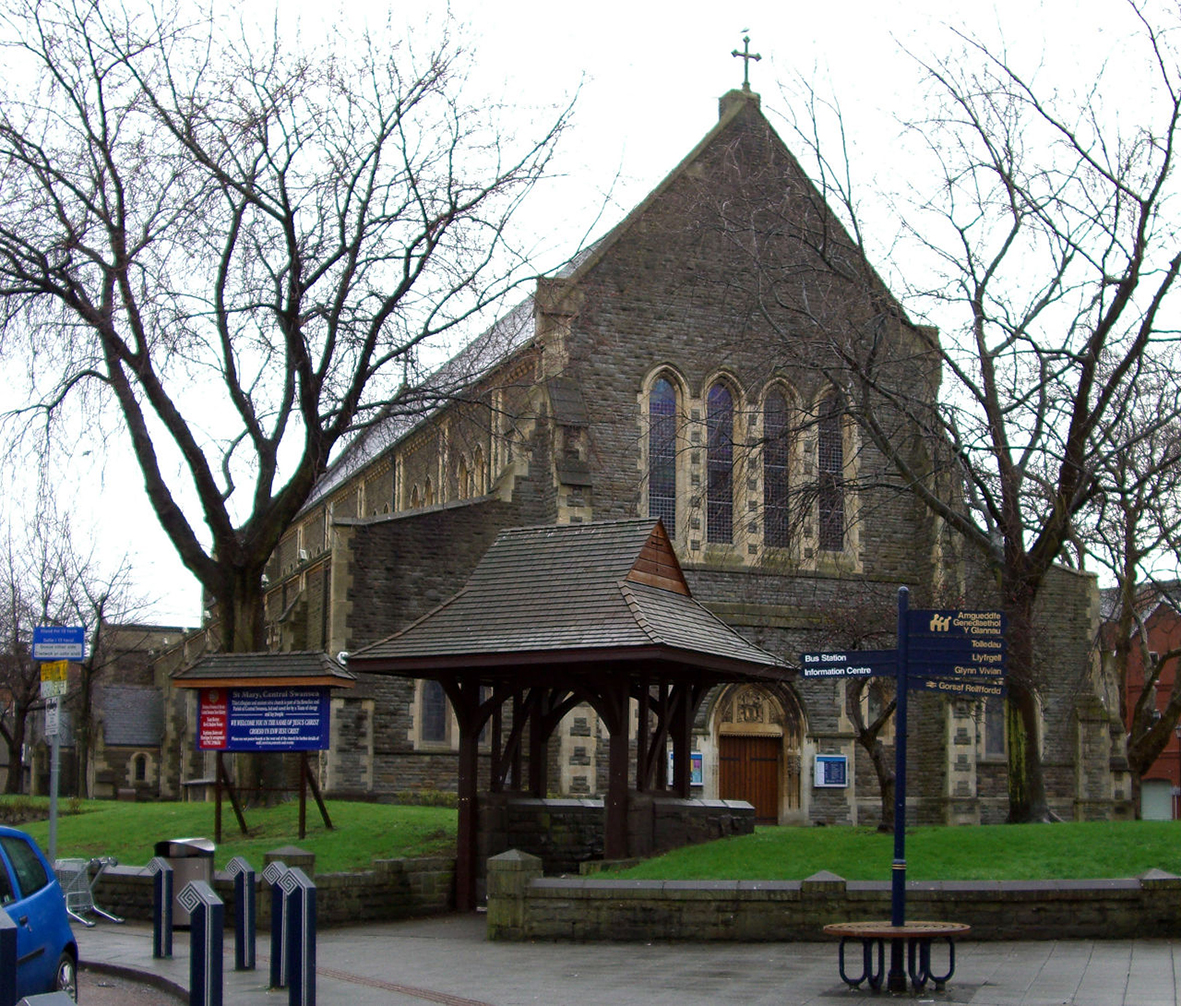 Looking back on the first three articles that I wrote, Birth, Marriage and Death Certificates, I am now looking further than just the paper records, and looking at where these events in a person’s life would take place……a church or other religious estab-lishment. What information does a church provide for a family historian?

Let’s take it back to the beginning and to understand what the word church means. The word derives from the Greek word, Kyriakos, meaning ‘of the Lord’.

With this number of churches in and around Swansea, this article covers churches, and the secrets they hold. To begin with, on entering the grounds, does the church have a lych-gate – this is a roofed gateway to a churchyard, formerly used at burials for sheltering a coffin until the clergyman’s arrival. Examples of a lych gate can be found at St. Paul’s, Sketty and St. Mary’s, Swansea.

Stand by the church building and look at the construction. Churches have been built in stone, as it is durable, abundant and comes in a variety of colours. Stones can be used in with rusticated blocks, which are blocks that have been intentionally carved to emphasise their depth. Some churches have been constructed in brick. The brick can be cut, moulded, glazed, such as is seen in the City Temple, Swansea. Some of the newer churches will have been made of concrete, St. Benedict’s, in Sketty, is a good example. The construction of the church will determine the style and age. One common style that was used locally was the gothic style. Gothic architecture represents an ecstatic classicism composed of columns, arches and motifs, St. James, Uplands and St. David’s Priory, Swansea, follow this architectural ‘trend’.

The majority of the churches in Swansea have slate roofs. Does the church also have the feature of a tower or steeple? They form the most distinctly ecclesiastical feature of the church. Church towers were first constructed during the Middle Ages and a good example of a church tower can be found at St. Illtyd’s, Oxwich. Notably the tower would house the church bell. In the case of St. Illtyd’s, the tower dates back to the 14th century, and the bell was recast during 1892, at the huge cost of £1,000 which was met by Miss Emily Talbot of Penrice Castle. St. Paul’s, Sketty 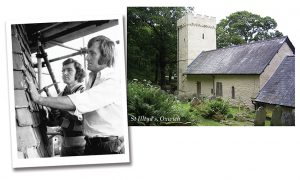 has a good example of a steeple (It was the father of one of our regular advertisers Peter Nicholas and Sons who worked on the steeple in1974 see pic left. Ed) This was re-roofed during the 90s.

After the war, the eight bells of St. Pauls were renovated at the cost of £1000. St. Andrews United Reformed Church, in St. Helen’s Road, is also a good example of a church with a pair of spires.

Many of the churches around Swansea have been designed in the shape of a cross. Wooden pews are located in the church nave. Their presence here dates back to the 15th century when they became more common. Prior to this date, the benches would have been made of stone and placed along the wall. Church pews offered a public visualisation of the social hierarchy within the whole parish, with the wealthy occupying the more desirable seats with the best view. I wonder where our ancestors used to sit.

Other features that can be found inside include a free standing octagonal baptism font. They are normally placed near the entrance to the nave. They are usually construct-ed of marble, wood or stone. 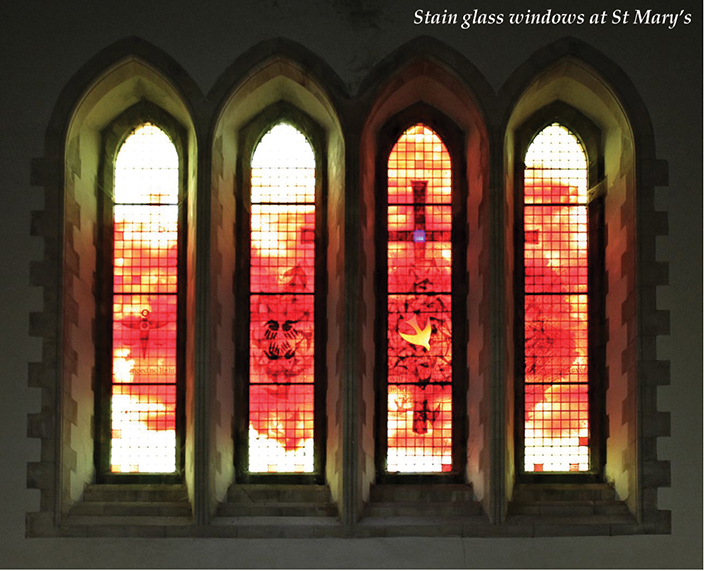 Plaques on the church walls depict either memorials to an ancestor or a list of past clergy.

Accompanying this article I have photographs of 10 churches – see the pics below. Name the church and location. The answers will be found after the pics. All the photographs have been taken by Jim Parker. 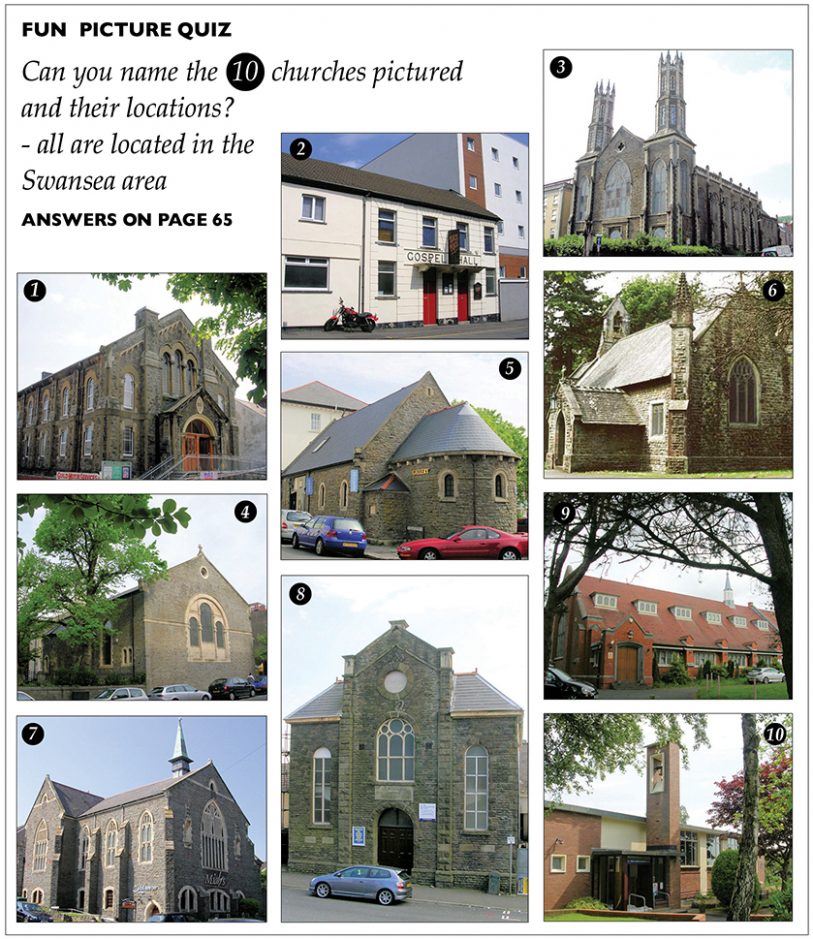 Next month, I will be solving a mystery.