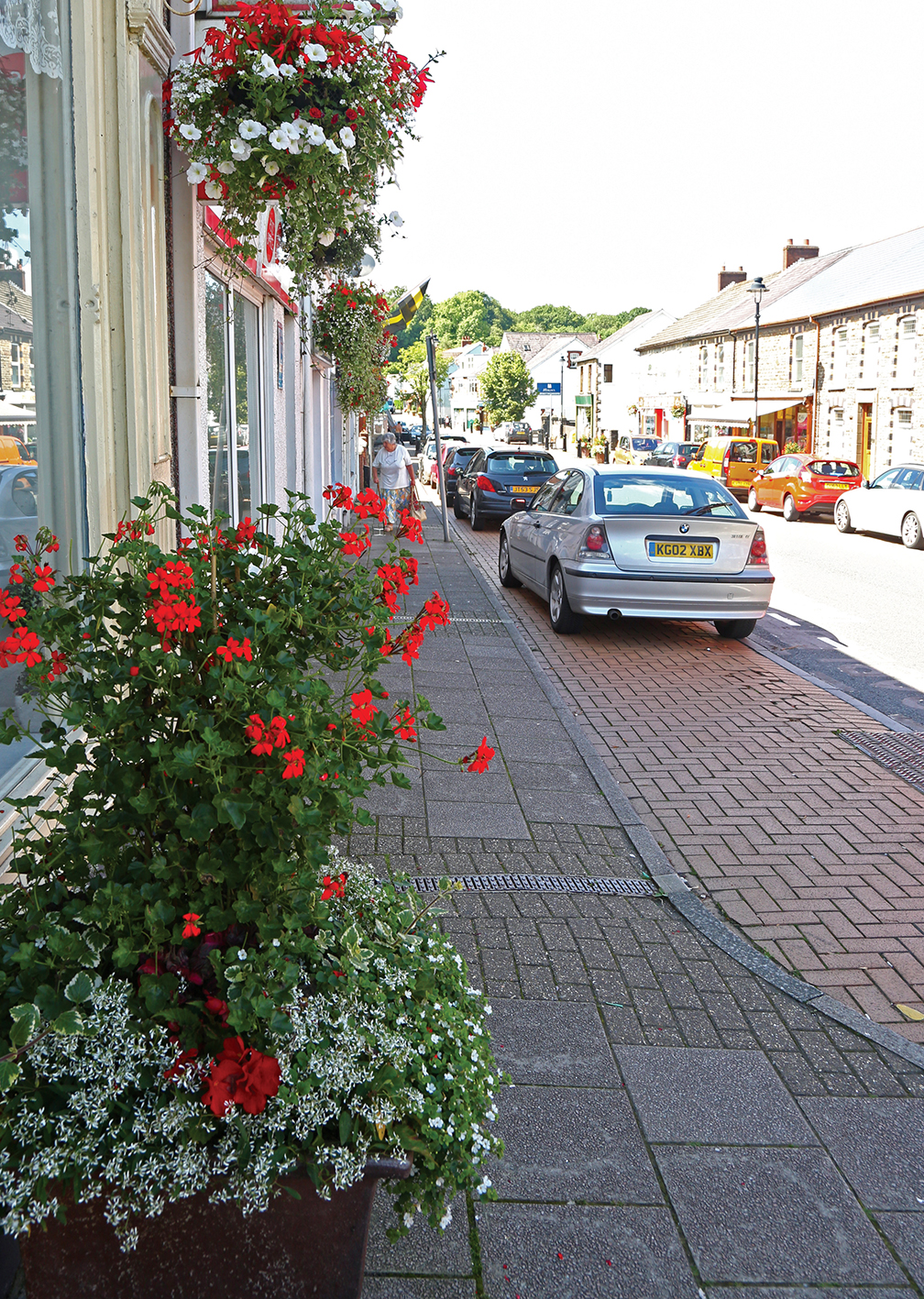 In April I wrote of my visit to the Upper Swansea Valley town of Ystradgynlais, and I encouraged readers to venture up the A4067 to see all that this little place has to offer. So I was delighted to get a call from one of the traders to say that a significant number of people had been spotted carrying copies of TheBAY in and around the town. So thank you to all of you who have taken the time to travel north into Powys.

One of the many additions the traders were excited about was the installation of 30 pavement planters and 85 hanging baskets which has brightened up the whole area.

The Ystradgynlais Society of Art, Trade and Tourism secured a grant from the Nant Helen 106 Fund to cover the cost of the planters; this is a community fund arising from the Nant Helen Surface coal mine in Powys. The fund is for environmental improvements.

The hanging baskets were purchased by the individual business owners from local supplier Quids In who have co-ordinated the colour scheme to complement the red, white and green of the Welsh flag. The traders were delighted to hear that the Town Council have committed to future funding for replanting next year. 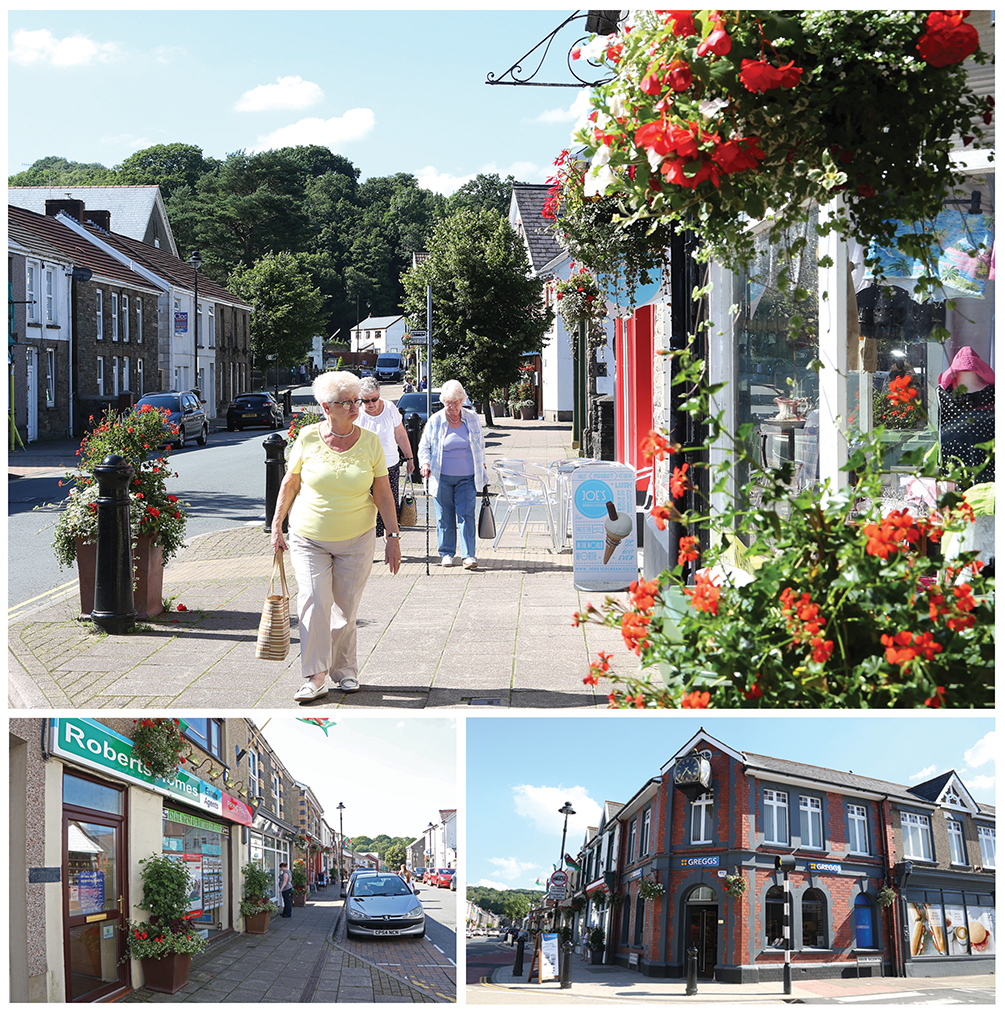 The town entered ‘Wales in Bloom’, a competition supported by the Royal Horticultural Society, which was judged in July as we went to press. The judges commented on the good choice of planting, appropriate to its environment.

The message on the RHS website for their ‘It’s your neighbourhood’ campaign in Wales says that it “supports local community groups to make our area a cleaner and greener place to live”. Well the businesses of Ystradgynlais have certainly done that, as they have had a very positive reaction from the townsfolk and wider community.

Since I wrote my last article a few new shops and galleries have opened for business. There’s a children’s clothes shop called Pethau Plant – which translates as Children’s Things, the Riverside Gallery in the Former Ynyscedwyn School has a great range of affordable art for the home and last but by no means least, there is now a Greggs.

Another addition to the town has been a business centre. The Forum Business Centre provides space for small businesses as an alternative to working from home. You can rent space by the hour for a meeting or by the day if you want to expand your business in new area – it’s an ideal way of testing the market without committing to a lease. 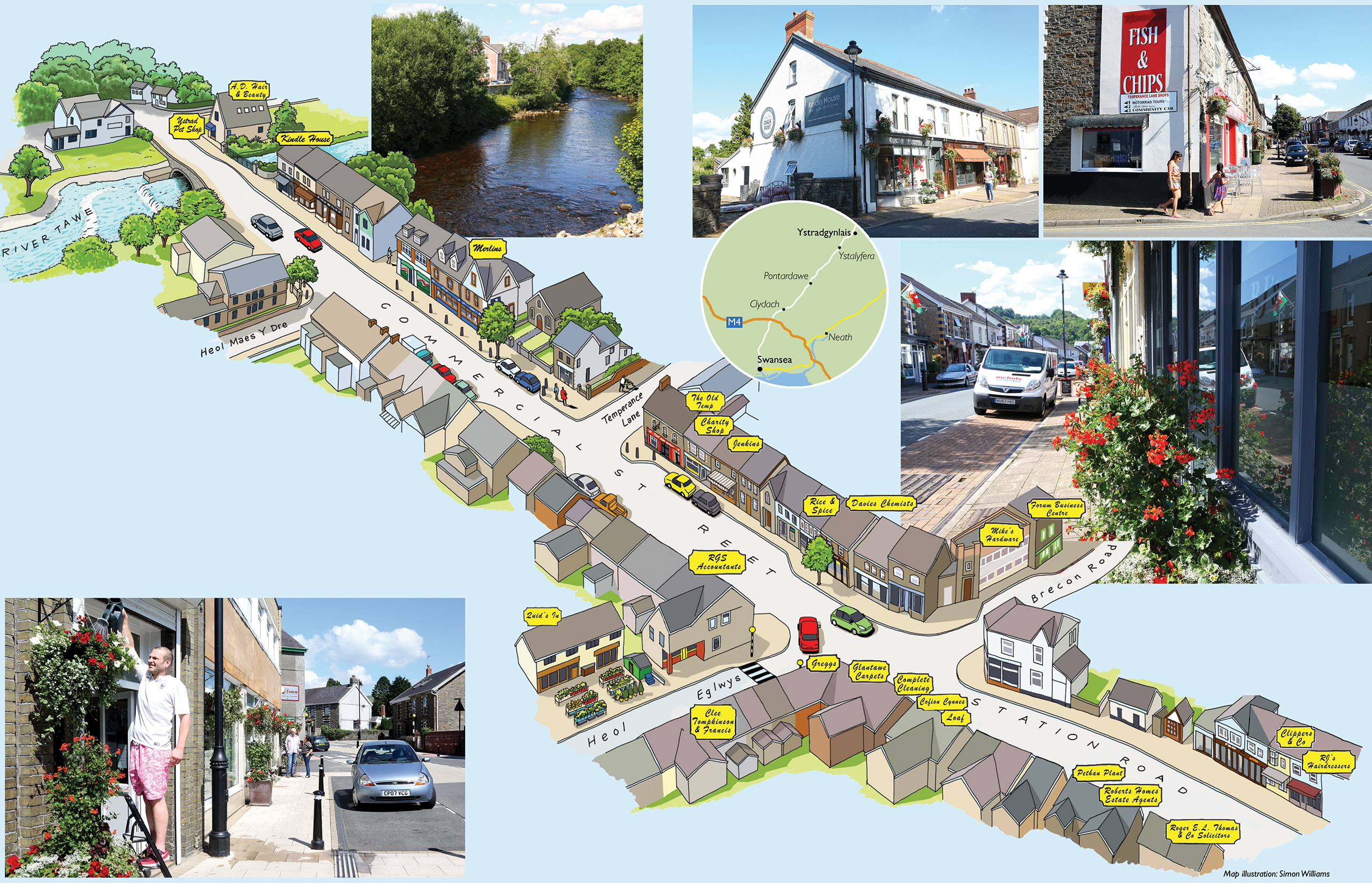 There is a strong sense of community in the area; earlier in the year they held a summer fair which saw the town come together for a day of celebrations. Many of the local craftspeople had an opportunity to exhibit and sell their work, while food suppliers showcased their produce. The evening was rounded off with a traditional village twmpath – a sort of Welsh barn dance. 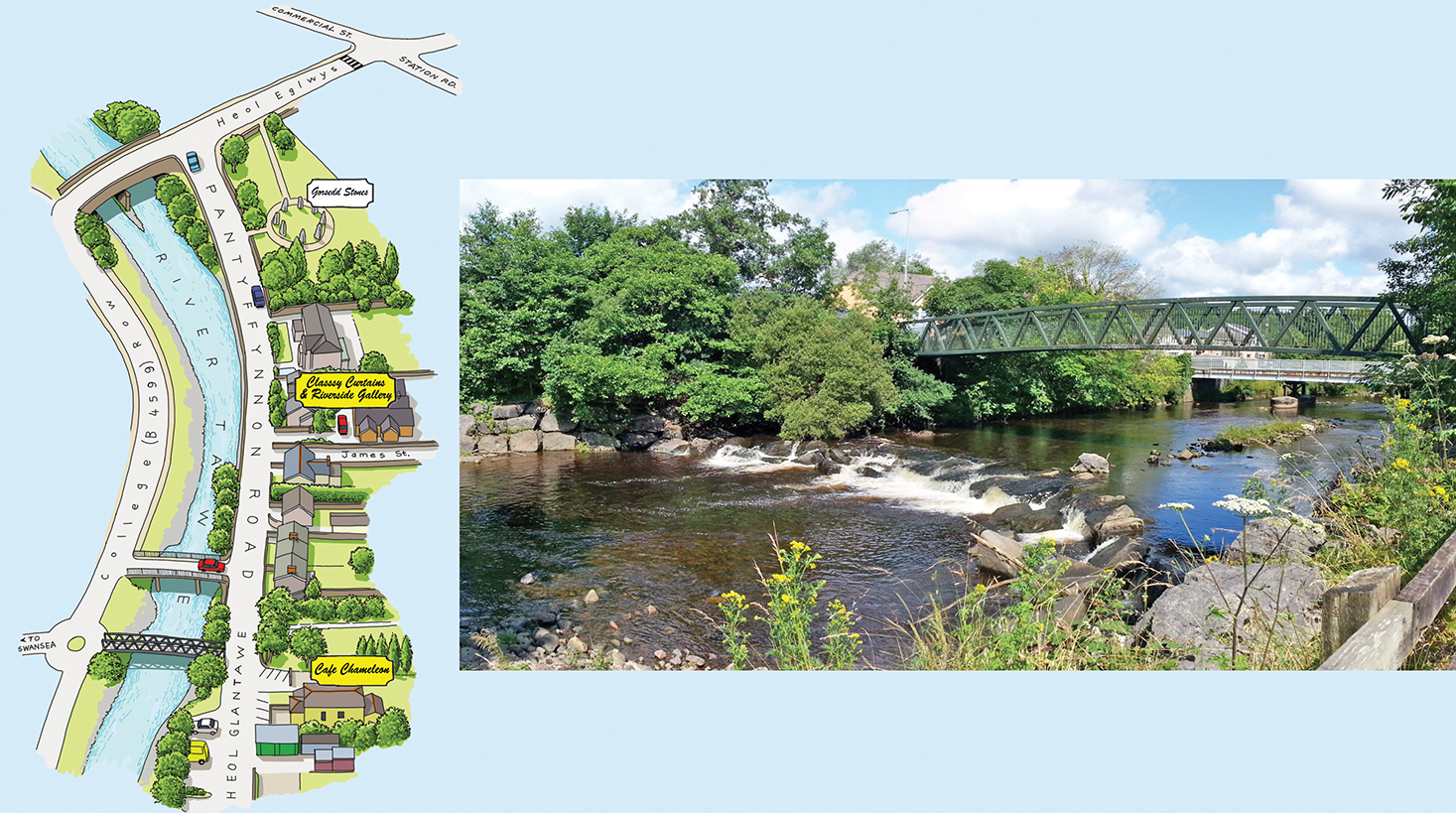 It was a resounding success and I’m sure there will be more fairs organised in the future.

On the subject of traditions, I was intrigued to learn that Ystradgynlais is one of the few towns to still have a blacksmith. Jason Gardner of Dragon Forge was commissioned in 2004 to make a replica of the sword presented to Owain Glyndwr in 1404. Today Jason is more likely to be making wrought-iron gates than weapons of war.

As the editor of a magazine, I was interested to hear about Thomas Levi who was born in a little cottage called Penrhos, near Ystradgynlais in 1825. Levi, like so many children at this time received no formal education but attended classes held by a retired soldier.

At the age of 21, Levi who was a religious man was preaching at Yorath Chapel in Cwmgiedd, and by the time he was 30 he was a minister at Ynys Chapel in Ystradgynlais. What was most remark-able about this man was the fact that although he was poorly educated, he went on to write thirty books on subjects that included theology, history and poetry. Not only did he write, but he also translated more than sixty books from English into Welsh. As if that wasn’t enough, he also collab-orated with Dr Joseph Parry on musical projects.

But it was his founding of a children’s magazine in 1862 that interested me most. He edited and pub-lished Trysorfa y Plant or Children’s Treasury until 1911. This magazine was published monthly reaching a circulation of 44,000 copies at its peak and was read by Welsh speaking children all over the world. I take my hat off to Thomas Levi – 49 years publishing a monthly magazine – without the technology available to us today – I can assure you I will not be editing TheBAY when I’m 85. He died in 1916 at the age of 90. 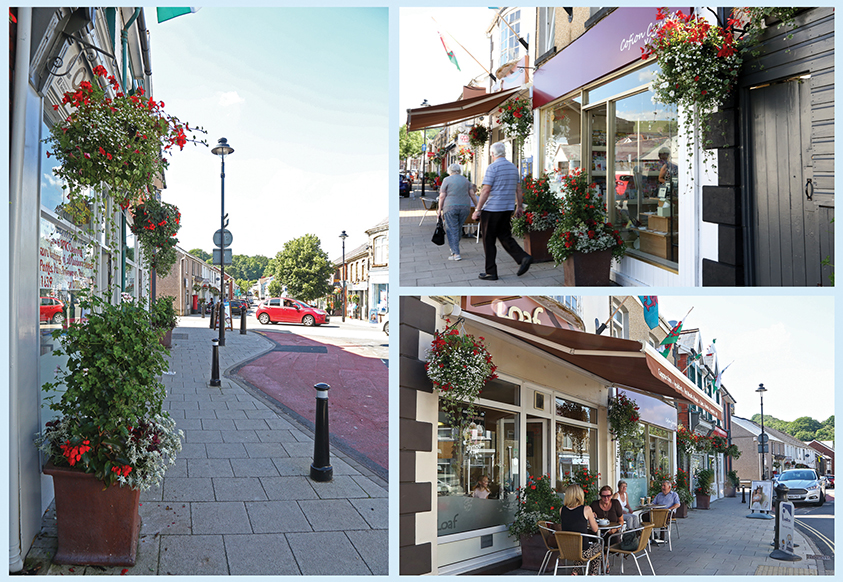 Looking at the estate agents’ websites I was amazed at the property prices in the area in comparison to Swansea West and Gower. Many of the houses I looked at came with acres of land and fabulous views of the Brecon Beacons.

Ystradgynlais is right on the edge of the National Park with its many activities from walking and cycling to rock climbing and abseiling. It’s also the perfect place for a spot of star-gazing. The Beacons were the first International Dark Sky Reserve in Wales.

If you’re planning a Stag or Hen party and want to include some outdoor pursuits contact Adventure Britain based in Ystradgynlais who will organise all manner of activities for you. They even have a bunkhouse in the town.

This month John Ashley’s walk takes in the surrounding area of Ystradgynlais. It’s a gentle walk, perfect for a fine summer’s day. Take a little time to explore the town centre – you’ll be pleasantly surprised at the number of independent shops that you’ll come across.