As a general rule, an unpopular insect finds itself in this unenviable position because of misconceptions, and even painful stings almost invariably occur as a result of misunderstandings. But there are some insects that get their bad names for a good reason: they are actually out for our blood. The most formidable of these are, without doubt, the fearsome blood-sucking flies of the family Tabanidae.

There are 30 members of the family Tabanidae in Britain, 21 species of large, imposing horseflies, 5 species of smaller, well camouflaged clegs and 4 species of elegant deerflies with patterned wings. In all of these it is only the females that are after blood, which they need in order to produce their eggs. To derive energy for their day-to-day activities, both male and female tabanids feed on nectar and sometimes pollen. 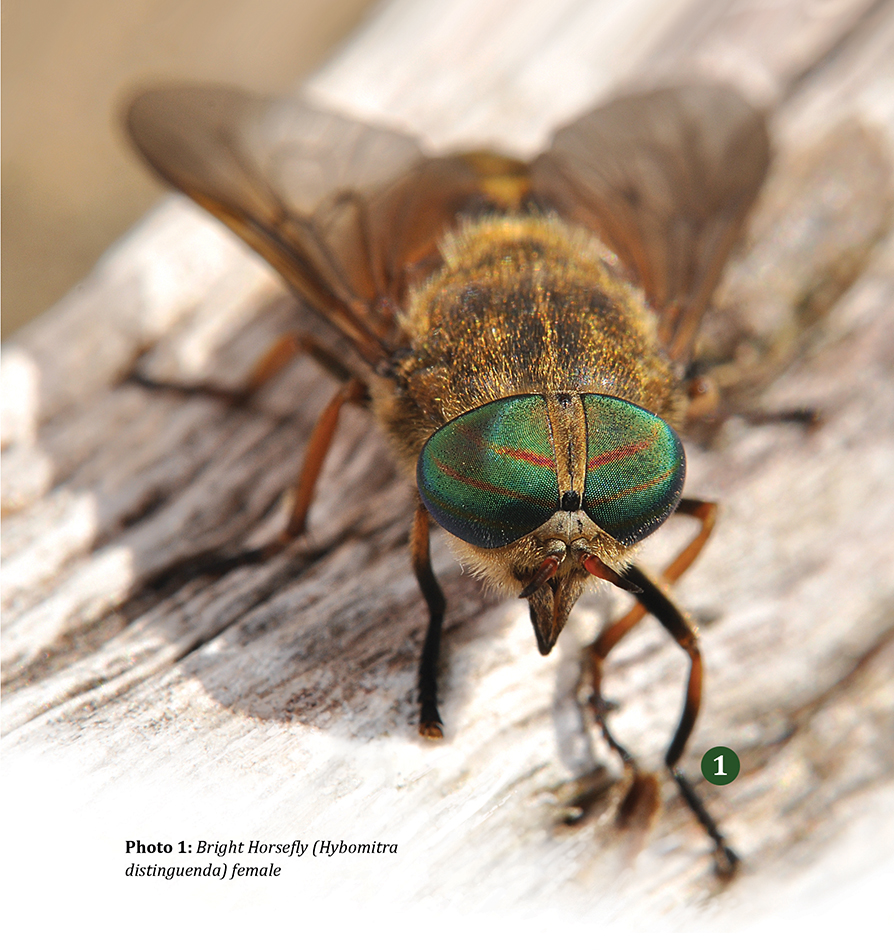 It is unfortunate that the bloodthirsty habits of their females make tabanids so unpopular, because, up close, they are attractive insects. Their eyes, in particular, are quite exceptional. The shimmering colours are usually lost when the animal dies, but the recent improvements in macro photography have made it possible to really appreciate the full extent of their beauty. Tabanid eyes are not only beautiful but also useful, because it is possible to tell males and females apart by the size and shape of their eyes. Given the efficiency of the females’ mouthparts it is comforting to know in advance whether or not one is likely to get pounced on while taking a photo. The eyes of female tabanids never meet on top of the head, as can be seen in the female Bright Horsefly (Hybomitra distinguenda) in photo 1, whereas those of males always do, as illustrated by the male Band-eyed 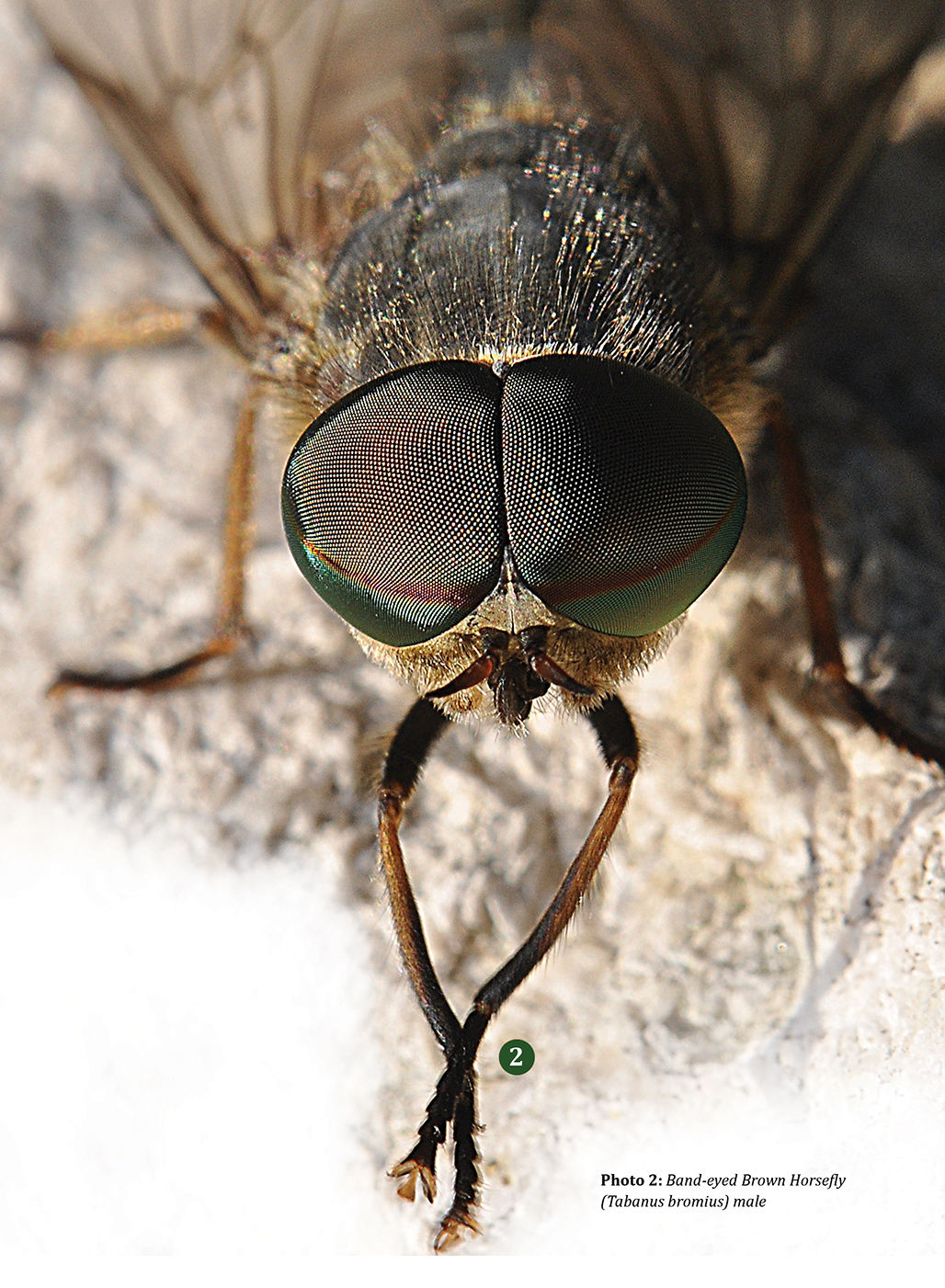 Brown Horsefly (Tabanus bromius) in photo 2. While horseflies and clegs have varying amounts of attractive sheen to their eyes, the prize for ‘Most Stunning Eyes’ (if there were such a thing) would doubtless go to a male deerfly, perhaps a male Splayed Deerfly (Chrysops caecutiens), with its huge, wonderfully iridescent eyes (photo 3). 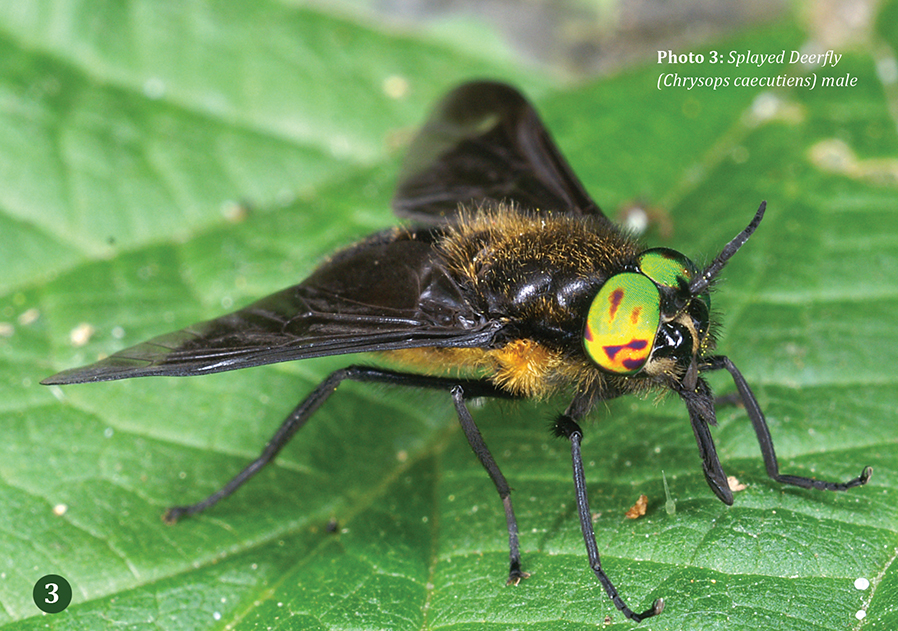 Considerably less attractive than adults, tabanid larvae look superficially similar to blowfly maggots, legless and pale in colour. In contrast to blowfly maggots they possess stubby outgrowths (pseudopods) along their abdomen to help them move around, and they also have strong jaws. They develop in water or damp ground, where they hunt for other small invertebrates, and some species are known to be cannibalistic when the opportunity arises. Contrary to many other flies, the larvae take a long time to grow and develop before they are ready to pupate, so that in Britain there is only one generation each year, with the adults emerging between May and September.

Some tabanids have interesting mating behaviours in which swarms of males congregate and perform hovering display flights until eligible females are spotted, which are then promptly pursued. They are strong and agile flyers and male hairy-eyed horseflies (Hybomitra hinei, an American relation of Hybomitra distinguenda shown in photo 1) have been filmed performing fighter jet-type manoeuvres called Immelmann turns (which consist of a half loop and roll) when in pursuit of a female. Both male and female tabanids can fly at speeds of over 4 metres per second (or 15 km/h) and occasional record speeds far in excess of this have been recorded. They are certainly fast enough to pursue a trotting horse with ease, not to mention a fleeing human.

In all species of tabanids, the adult females have specially adapted jaws which take the shape of sharp blades with which they are able to cut through the often tough skin of their chosen hosts. In contrast to mosquitoes, which possess very thin syringe-like mouthparts and inject numbing saliva so that their feeding goes unnoticed, tabanids aim to quickly produce a rather large wound into which they inject an anticoagulant to promote bleeding so that they can return to lap up the blood with another specially adapted sponge-like mouthpart even when they are repeatedly disturbed by their victims. While this final stage of their attack is identical in all tabanids, their initial approach varies. 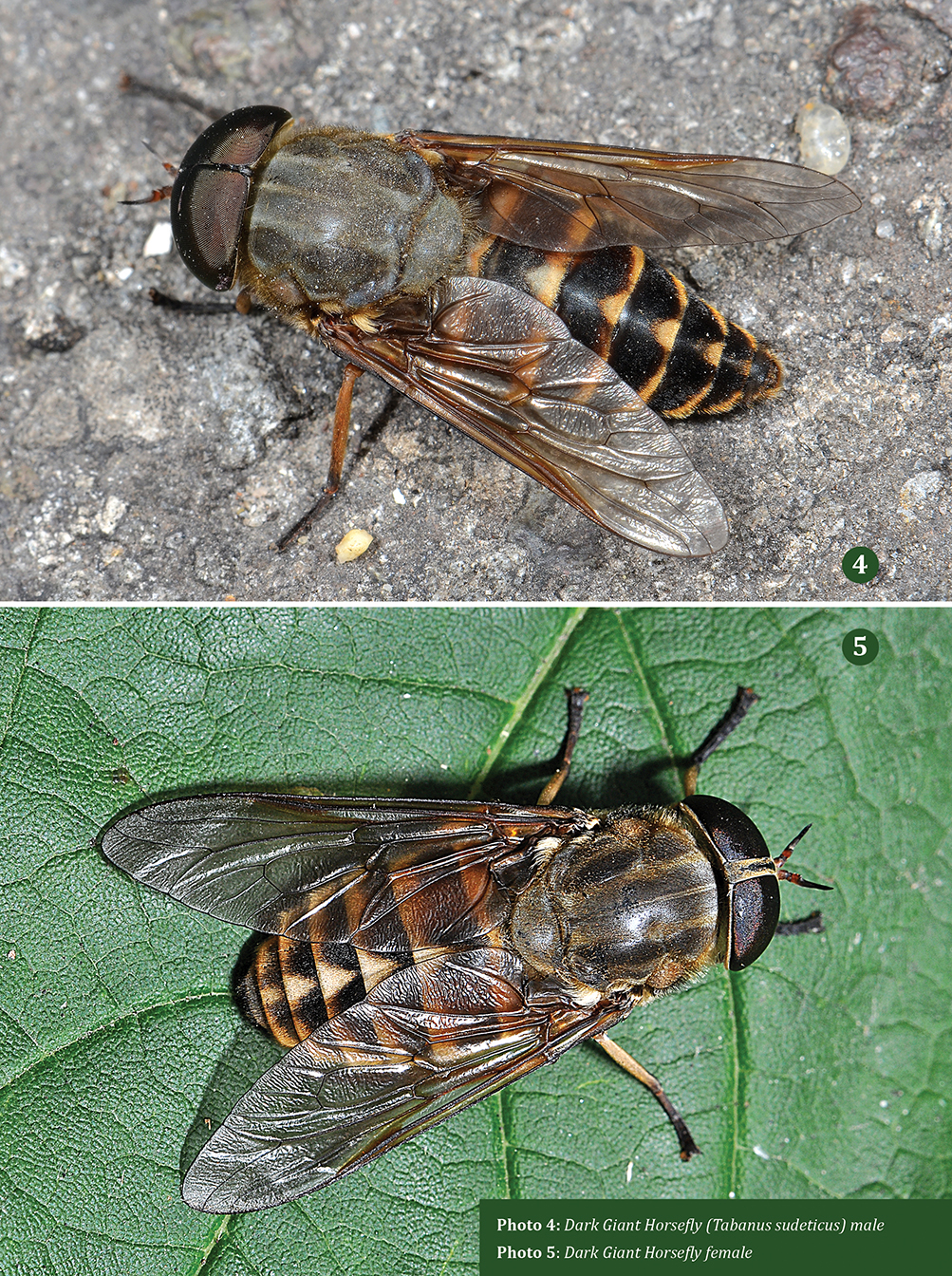 Generally, the large horseflies tend to attack from below, aiming for the legs and belly of their chosen hosts where the coat is thinner and the skin more easily accessible. Even though they are quiet flyers for their size, their approach is not entirely silent and they will often give chase if their victim hears them coming and takes evasive action. Britain’s biggest horsefly, the Dark Giant Horsefly Tabanus sudeticus (male photo 4, female photo 5), reaches a body length of over 25 mm, making it larger than a queen bumblebee. Its stripes can be quite bright and it is therefore sometimes mistaken for a very large bee.

The smaller clegs, for example the Black-horned Cleg (Haematopota crassicornis) a male of which is illustrated in photo 6 or the equally beautifully camouflaged female Notch-horned Cleg (Haematopota pluvialis) (photo 7), on the other hand, are masters of stealth. They are able to approach noiselessly and are prone to attacking from behind, so that they often manage to go unnoticed until the pain from their bite sets in. They tend to attack around waist height, so that humans frequently get bitten on the hands and wrists. 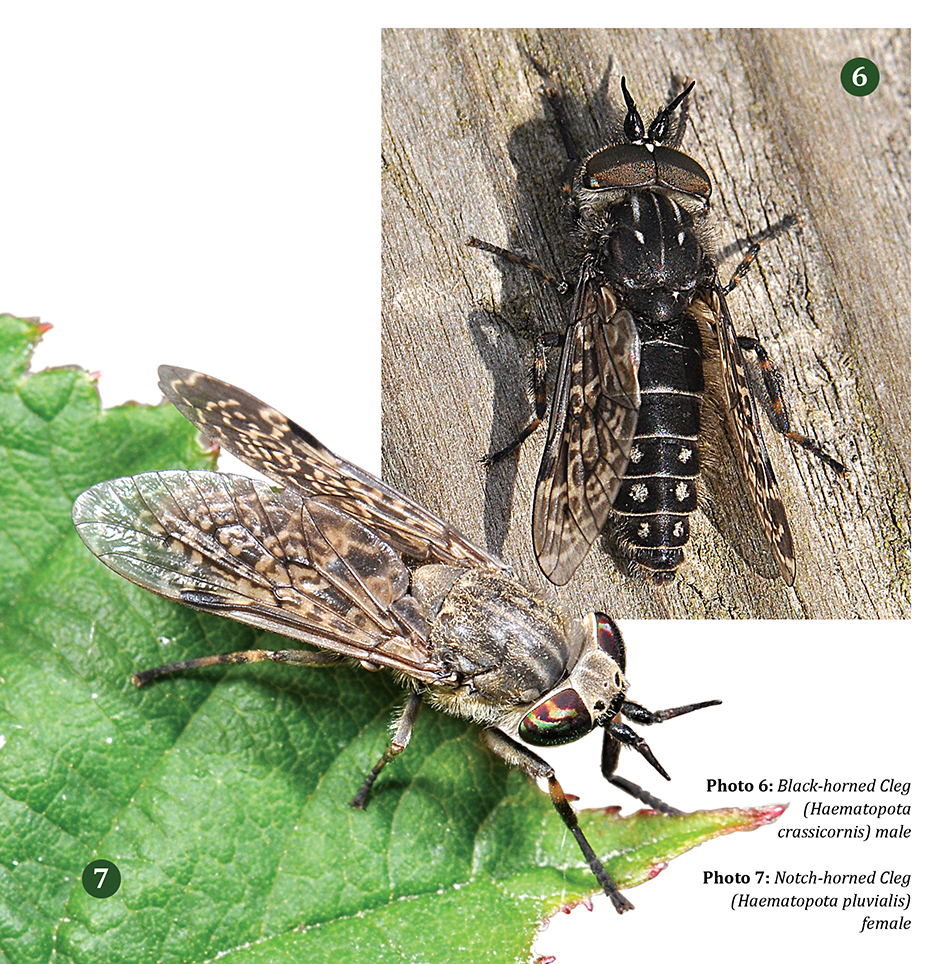 The pretty and deceptively innocent looking deerflies like the Twin-lobed deerfly (Chrysops viduatus) (photo 8) like to attack high on the body, in the head and neck region. They are also part-icularly drawn to moving targets, so any attempt to shoo them off only serves to alert more of them.

All tabanids are attracted to dark colours more than to light colours, something to bear in mind when choosing outdoor clothing. A recent study has shown that the zebra’s stripes most likely evolved in order to protect it against horseflies. Scientists were able to prove that horseflies were drawn to stripes far less than to dark colours, but also less than to plain light colours.

Perhaps it is now just a matter of time until a  new line of tabanid-baffling zebra-striped outdoor gear comes on the market! 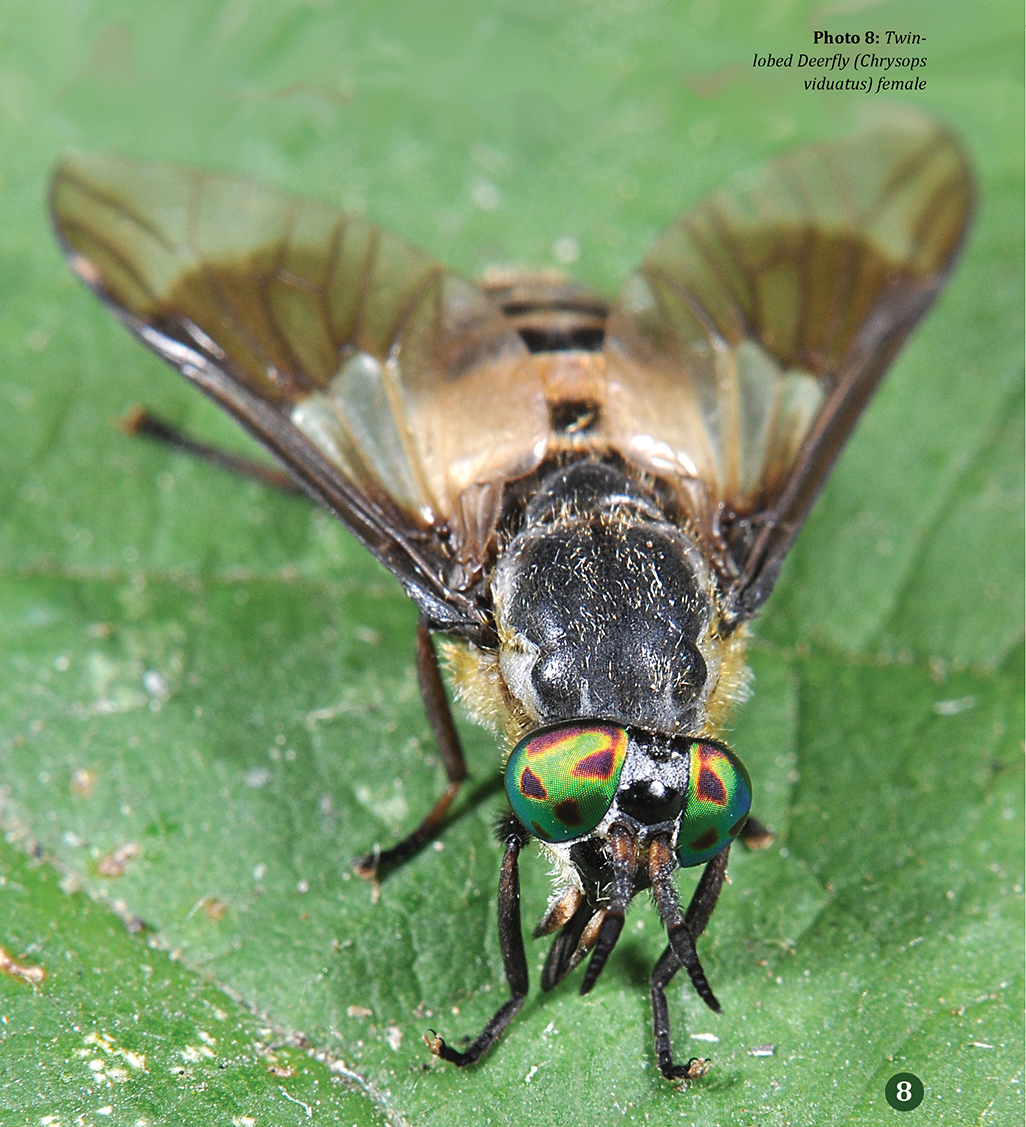 In the meantime, insect repellents containing DEET (N, N-Diethyl-meta-toluamide) along with (pale-coloured) long trousers and long sleeves are the best way to put a female tabanid off her human dinner.

It is possible to develop allergic reactions to DEET, so it is advisable to discontinue use in case of irritation. It is also possible to become allergic to tabanid bites and rare cases of anaphylactic shock have occurred. A much more common complication of a tabanid bite, however, is an infection of the relatively deep wound, so it is vital to keep the area clean and not to scratch it until it is fully healed. It is also important not to ignore any early signs of infection, such as redness around the wound starting to spread some time after the initial bite. Luckily, in Britain tabanids do not usually transmit diseases to humans like they do in other parts of the world.

While most species of British tabanids are widespread throughout the country and can occur in large numbers where there is suitable damp habitat and plentiful livestock, some are very rare. One such species is the unusually coloured Golden Horsefly (Atylotus fulvus) (photo 9), which requires boggy habitats to thrive and is now only found in a few locations in southern England and Wales. 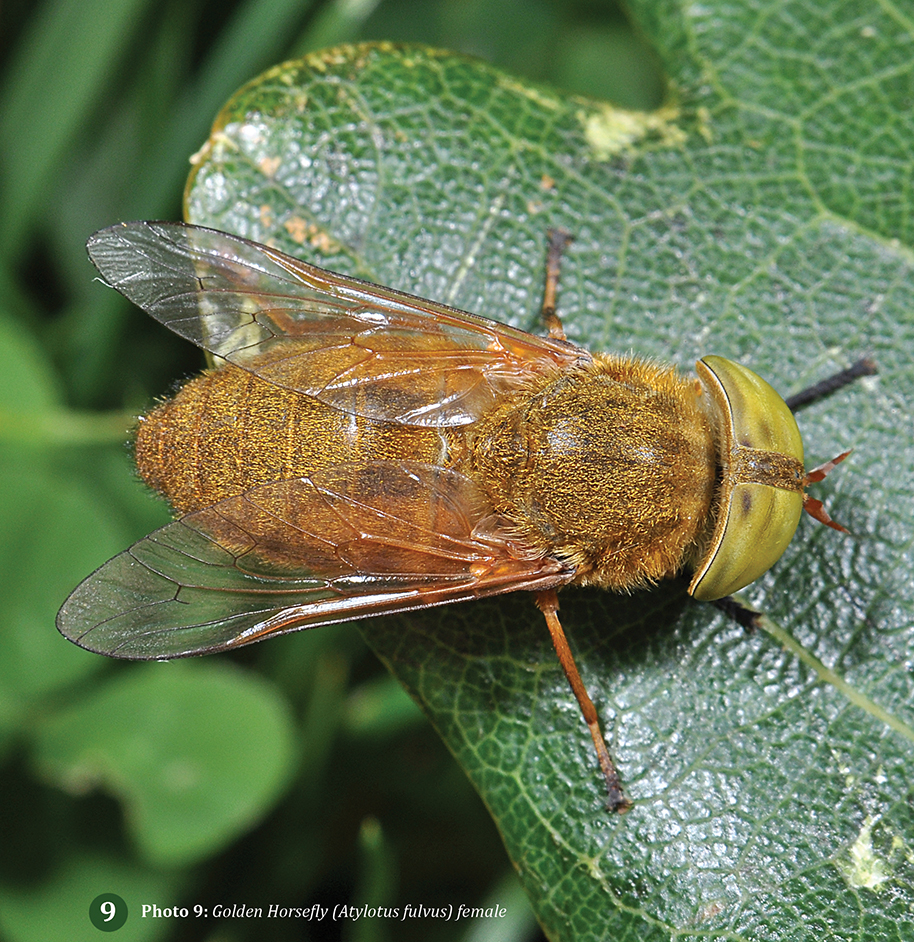 Such rarities excepted, the one bonus about tabanids is that, should one wish to photograph them, there is no need for painstaking searching like there is for most other insects. Apparently – according to an eminent entomologist – all one has to do is park a hot (ideally dark coloured) car next to a pasture with grazing animals, open the doors so that the carbon dioxide from the occupants’ breath acts as a further attract-ant and then just sit expectantly, with camera (and sampling pots, in case of multiple arrivals) at the ready, mentally prepared to look deeply into the ‘eye of the tiger’.