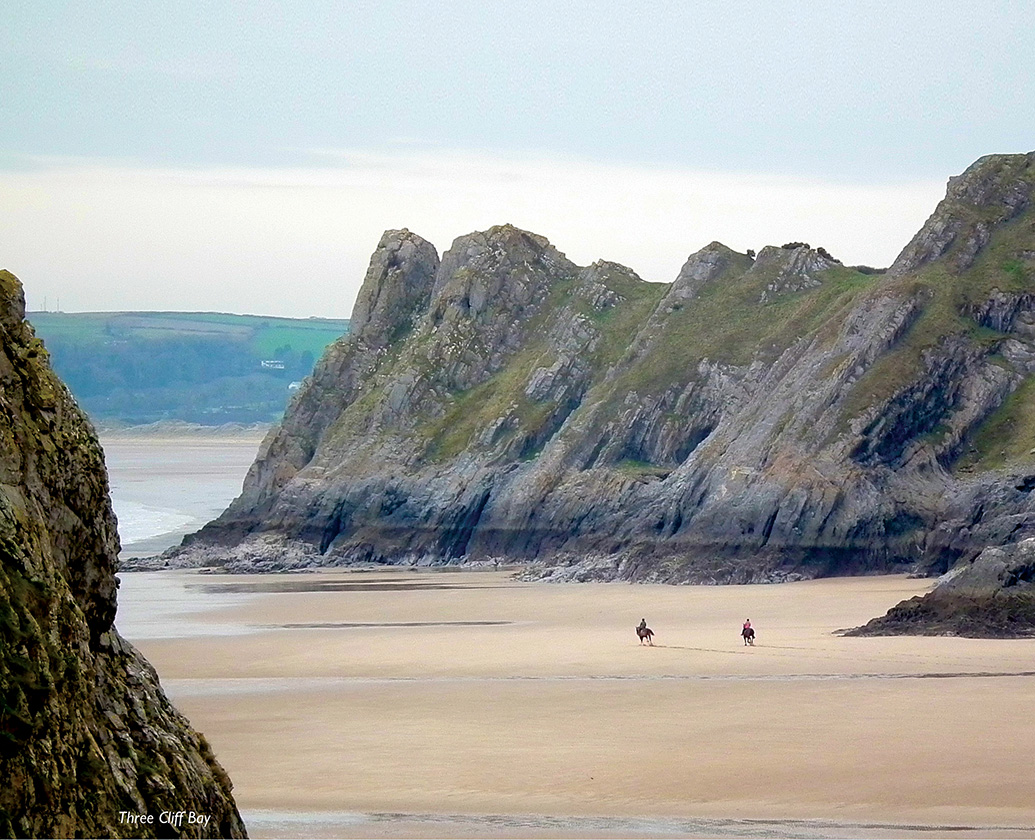 For visitors to Swansea this month, The Gower Society highlights some of Gower’s best loved walks and beaches. 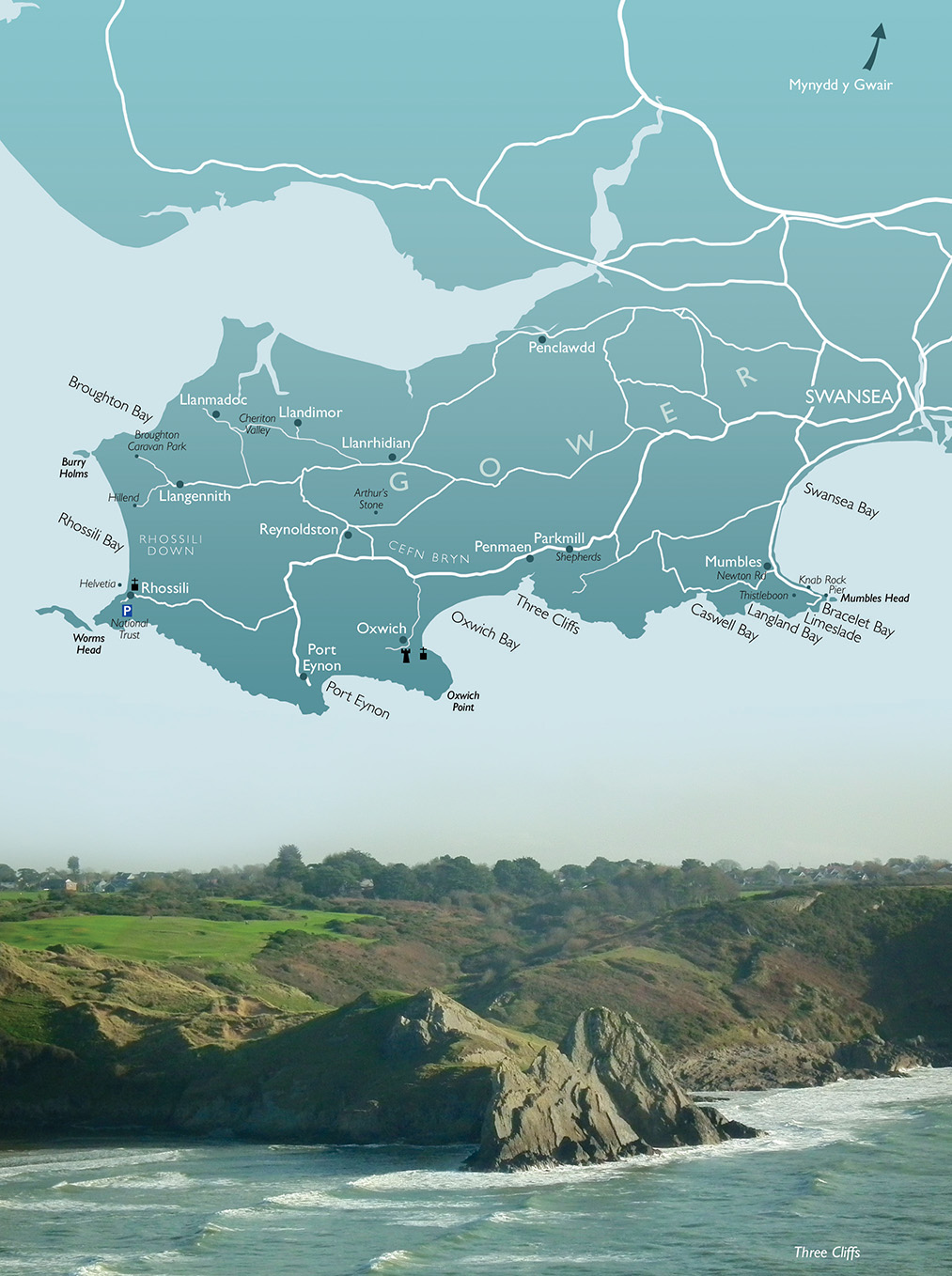 While the Lordship of Gower extends as far as Mynydd y Gwair to the north of Swansea, the Gower Area of Outstanding Natural Beauty (AONB) is principally in the peninsula west of the City of Swansea. This year is the 60th anniversary of its designation as an AONB – it was the first area in the United Kingdom to be awarded this status – due primarily to the work of The Gower Society which had been formed in 1947.

To celebrate this significant anniversary, the Gower Society suggests twelve walks and places of interest to visitin no particular order.

The drive to Rhossili at the south-western tip of Gower, is a good way to learn the geography of the area. A walk from the National Trust car park in Rhossili out to Worms Head takes in the iconic view of Rhossili Bay that is renowned worldwide. The further walk over to Worms Head is challenging but rewarding. The outward and return must only be taken at low tide. The warning and tide times near the Watch Station must be taken very seriously.

The opposite end of the Lordship, albeit outside the Area, is also worth a visit for its upland expanse and solitude. The Gower Way, is marked by 50 stones. It starts at Worms Head and ends at Penlle’r Castell (“summit place of a castle”) with its remains of the highest castle in the old Glamorgan area. This walk is worth following whether in whole or just a part of it. 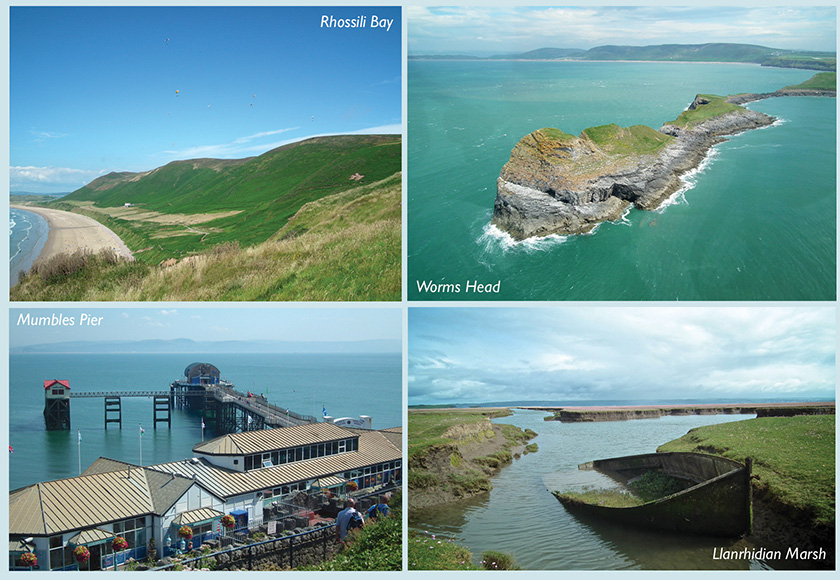 Like Gower, it is more correctly known locally without the “The”, Mumbles has independent shops around Oystermouth Square and up Newton Road. The walk along the seafront (in the line of the former famous Mumbles Railway 1807 – 1960, the first passenger-carrying railway in the world), to the pier and beyond to Mumbles Head, is worthwhile for its expansive view of Swansea Bay. At the end of the pier the new lifeboat station, alongside the old, is worth a visit. There is a window of commemoration in the church at Oystermouth to the lives of eight lifeboat men lost in a disaster on the 23rd April 1947. A walk up on to Mumbles Head from Bracelet Bay, is rewarded by an even more spectacular view.

After parking at the end of the road next to the marsh, walk west-wards, but not at high tide, to Cheriton Valley and beyond. The pill in Cheriton Valley is negotiated at lower tide, over concrete blocks. The diversion out along the sea wall, which was built about 300 years ago to reclaim marshland, remains interesting in spite of a significant breach in the wall through rainfall in 2014.

Oxwich, extending at low tide to Three Cliffs Bay, is nearly as long as Rhossili Bay. It is worth including Three Cliffs Bay with the archway in the rock at the east end supporting the “three cliffs”. You can walk to Three Cliffs from Oxwich at low tide. Otherwise park at Penmaen, parking is available above the church, or park at Shepherds and walk over Pennard Burrows. Swimming is unsafe due to the strong undercurrent. If you want to avoid the beach, there is a contrasting walk past Oxwich church which can be seen nestling in the woods beyond the hotel. Climb the steps on the south side of the church and then out to Oxwich Point, returning through the fields on the headland and past Oxwich Castle.

The summit of the hill gives extensive views to the north, south and west as well as the east of the Area, especially Oxwich Bay. It is a relatively easy climb and worth extending beyond the summit, down to Reynoldston Village. Don’t miss “Arthur’s Stone” – 25 tons of raised rock at a reputed burial chamber. Parking is above Penmaen church.

After parking at the entrance to Broughton Caravan Site, the walk passes briefly through the site before picking up the cliff- top walk at the edge of the dunes around to Burry Holms, which again can be reached only at lower tide. Return by going further south behind the dunes, or walk along Rhossili Bay to Hillend Caravan Park where there is a restaurant, and back along the road to Llangennith Village.

These two bays, are close to Mumbles. Both have car parking facilities, cafés and safe swimming. They are ideal for families but dogs are not allowed from May to September.

This is another safe beach for swimming and families. There is a good range of cafés, pubs and beach-shops. 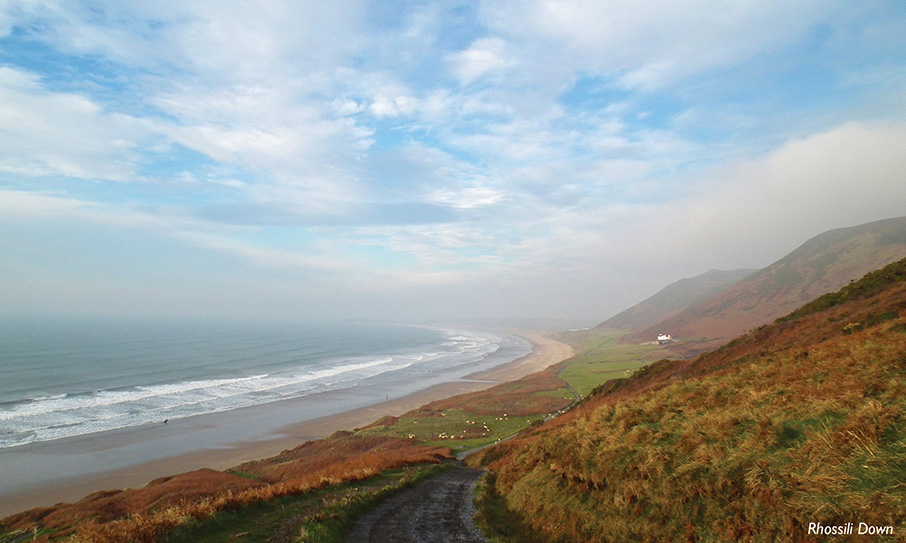 Park at the National Trust car park, then either walk along the road or behind the church, across to the foot of the Down where the short but steep climb starts up to the trig point. You can then extend the walk northwards, taking in a deviation down to the remains of a WW2 RAF look-out station, before dropping down to Hillend. Your return can either be on grass at the higher level just above the beach or on the beach of Rhossili Bay. Look out for the remains of the ship wrecked Helvetia.

There are exhilarating boat trips from Knab Rock (near Mumbles Pier) to Three Cliffs Bay and Oxwich and to Worms Head. The whole of the varied southern coast line from the sea is intriguing, as well as exciting, for both adults and children seeing the caves, beaches and high cliffs as the boat speeds on its way. www.gowercoastadventures.co.uk

For cricket lovers, time watching Mumbles CC at Thistleboon, near Limeslade Bay, would be well spent. The Club are in the top division of the South Wales Premier League and are often strengthened by county players while being rested from championship duties.