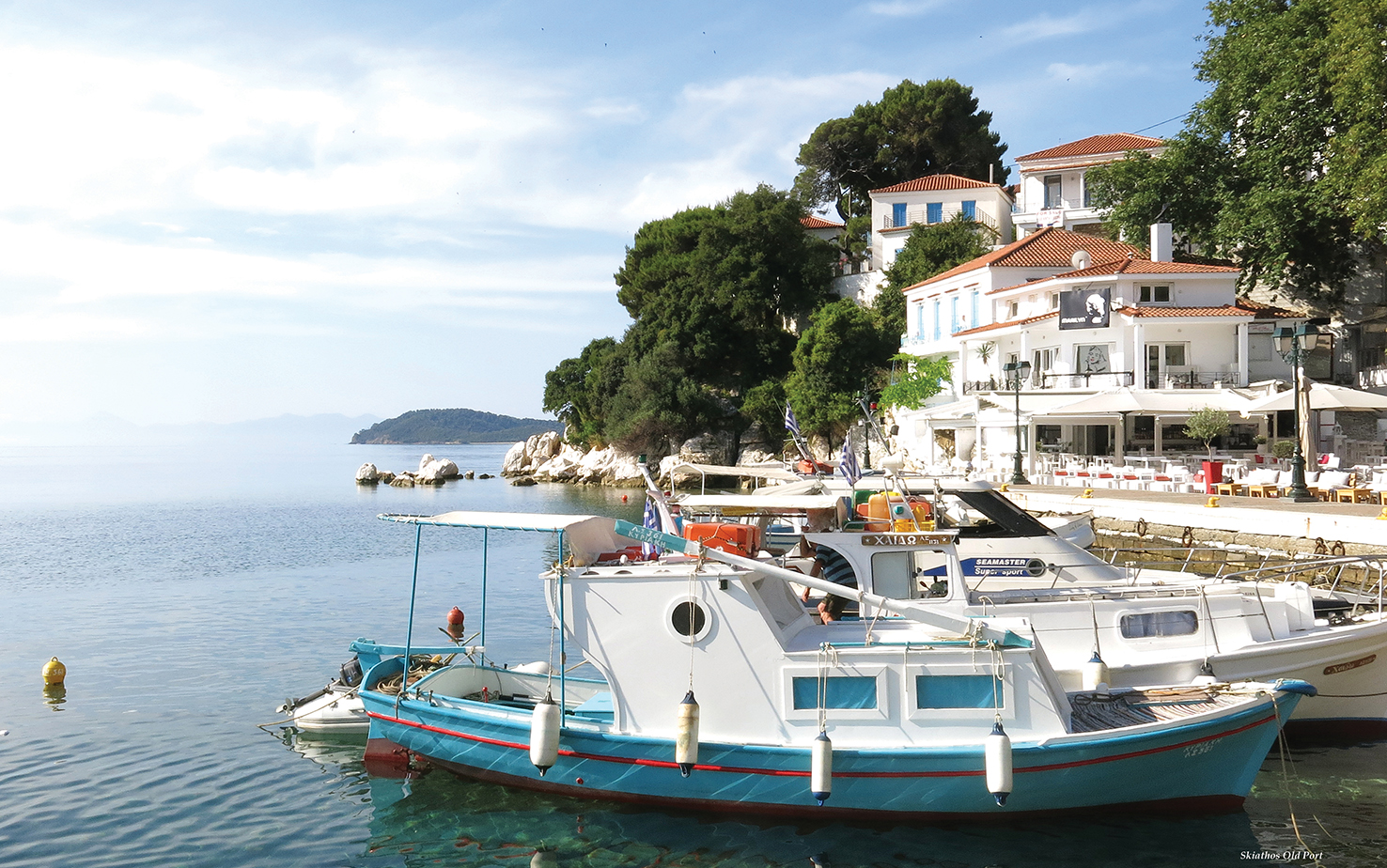 Earlier this year, Liz packed a bag, picked up her camera and took off for the Greek island of Skiathos.

Ever since I saw the Abba inspired film Mamma Mia, I had wanted to experience this idyllic Greek island for myself, with its whitewashed houses fringed with bougainvillea and golden beaches washed by the Aegean Sea. I wasn’t disappointed.

Skiathos has over 60 beaches, which on the southern side of the island are easily accessible with calm shallow clear waters. Off the beaten track and with a more rugged terrain, lie the beaches of the northern side, some of which are only accessible by boat.

It is a place where walkers can explore paths which lead past lakes, through wetlands and sweet scented pine forests. Visitors looking for a quiet respite from the heat can wander into monasteries and chapels, decorat 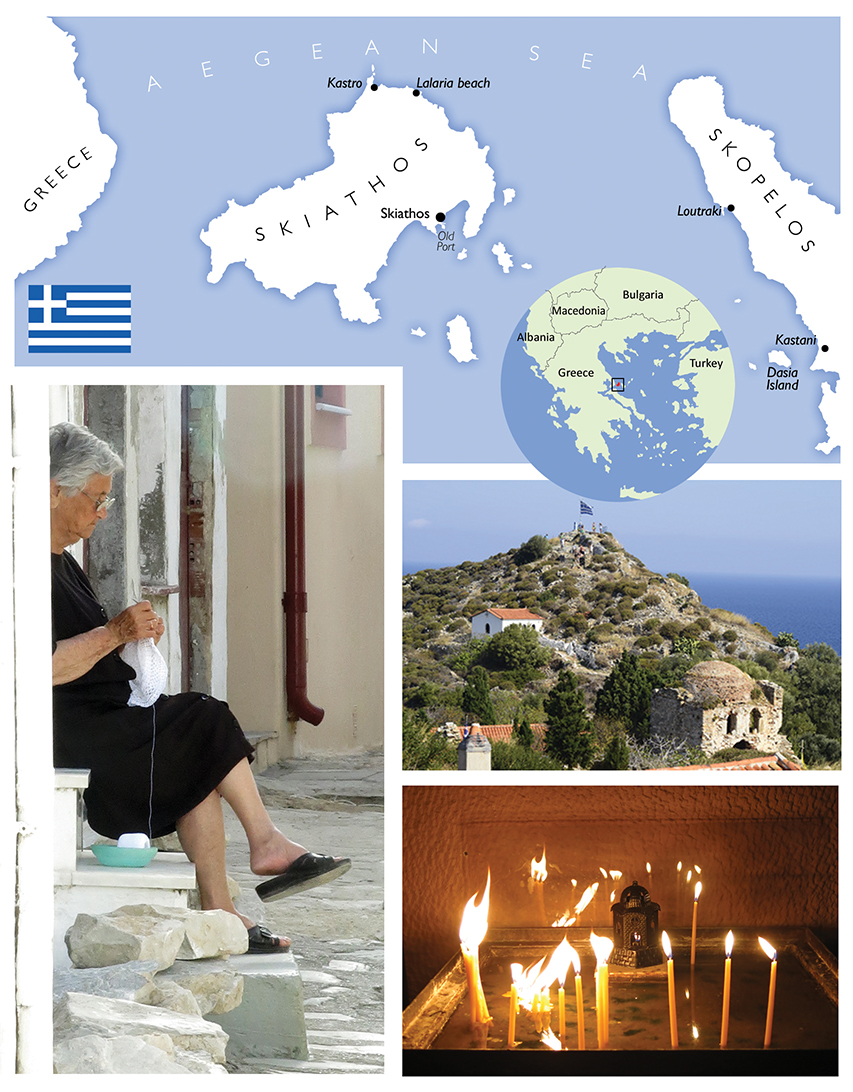 ed with painted icons illuminated by the light of flickering candles.

The ruins of the medieval town of Kastro are a popular tourist spot. Reached by car or boat, the remains of over 400 homes and 20 churches that were protected from the threat of pirates by the castle walls can be seen scattered around the hillside. Kastro remained the capital of the island until 1829 when the Greek state was established, the inhabitants no longer felt under threat and dismantled their dwellings brick by brick and returned to the coastal town of Chora, the only town on Skiathos which overlooks the old port.

The town of Skiathos, or Chora (which is the name commonly used for the main town in every Greek island) is built around a small bay; cobbled streets wind their way uphill, where ladies dressed in black sit on doorsteps knitting and exchanging news, as the heat of the day subsides. Here tradition sits side-by-side with cosmopolitan, as dozens of shops line the pedestrianised Papadiamanti Street which leads down to the waterfront where café’s bars and restaurants line the promenade. 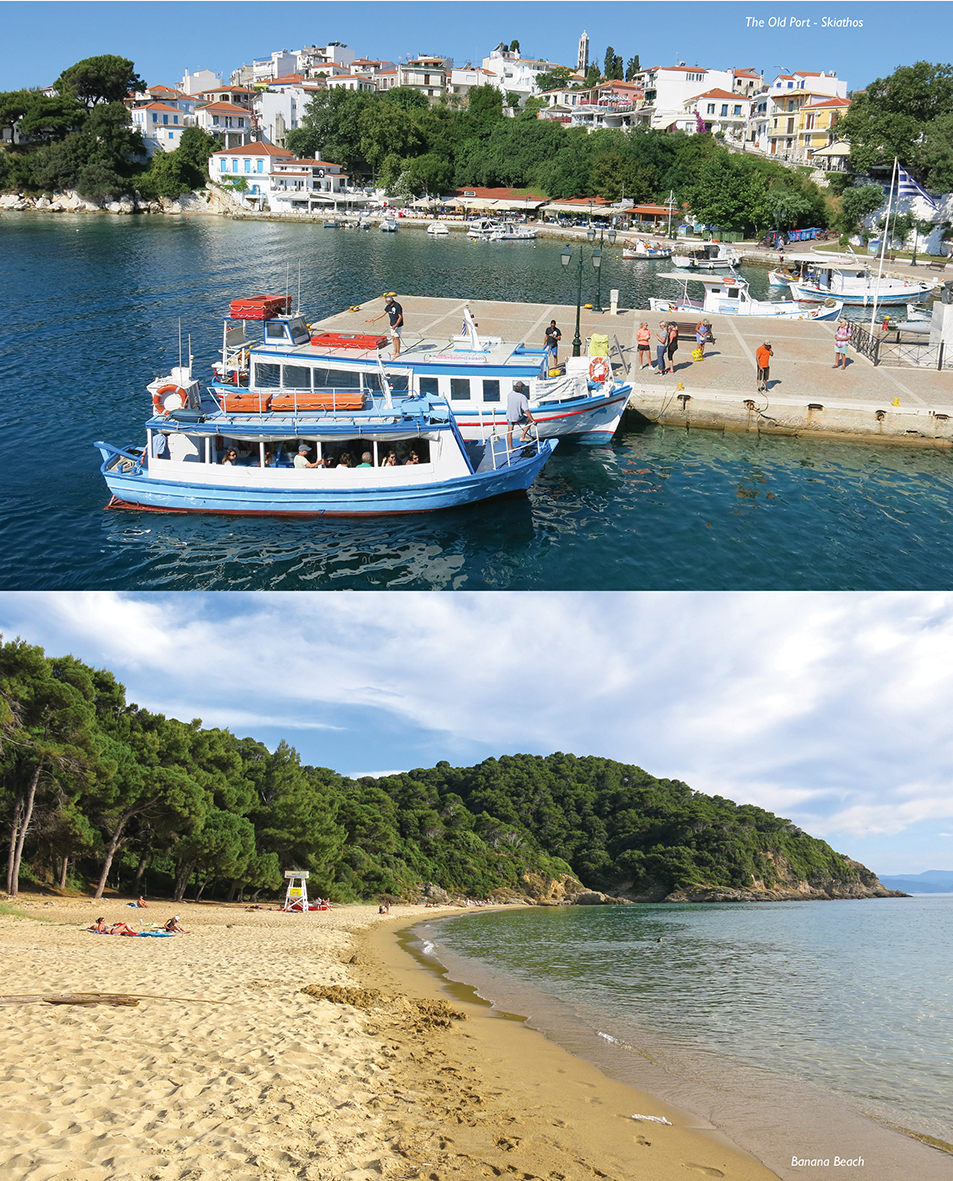 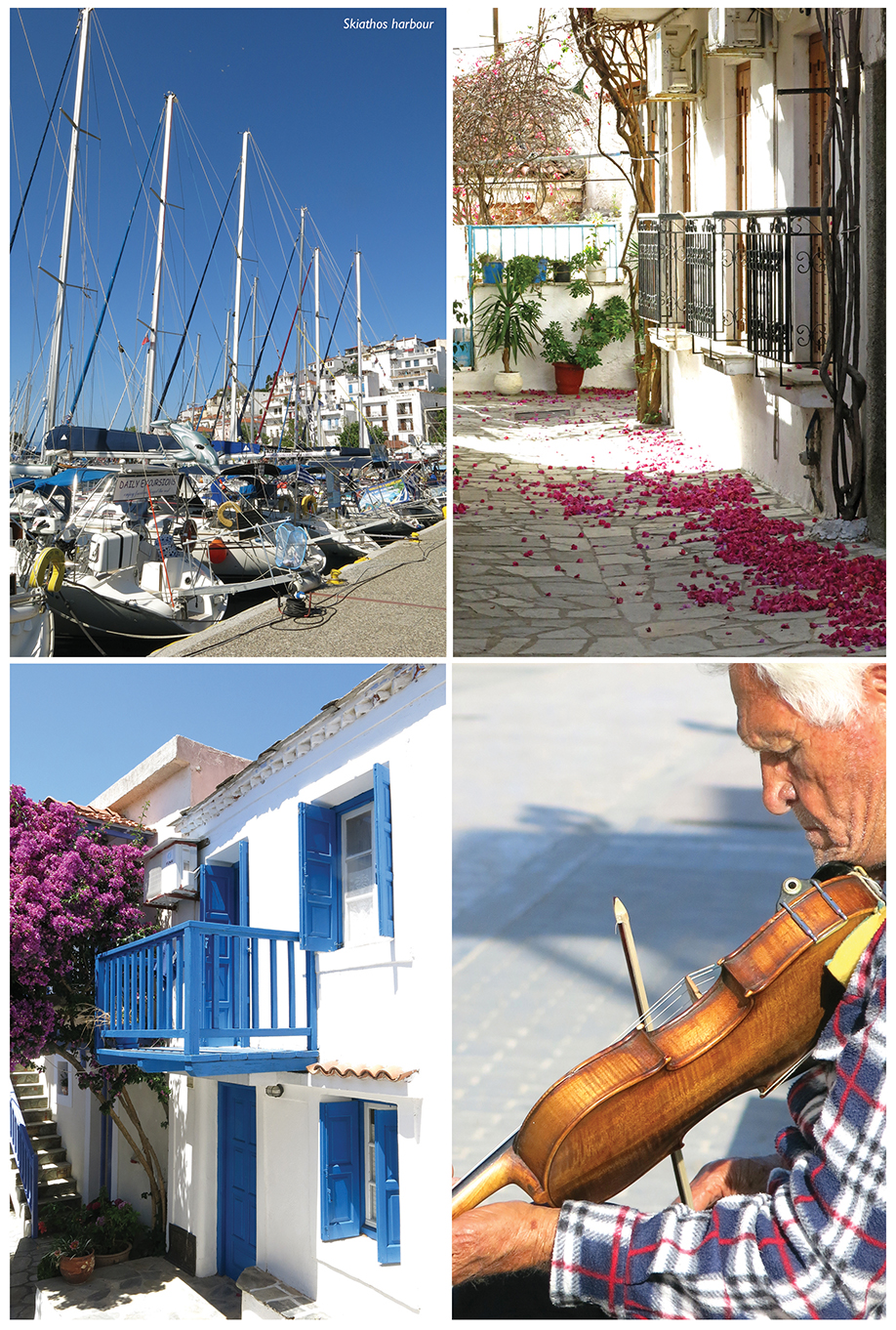 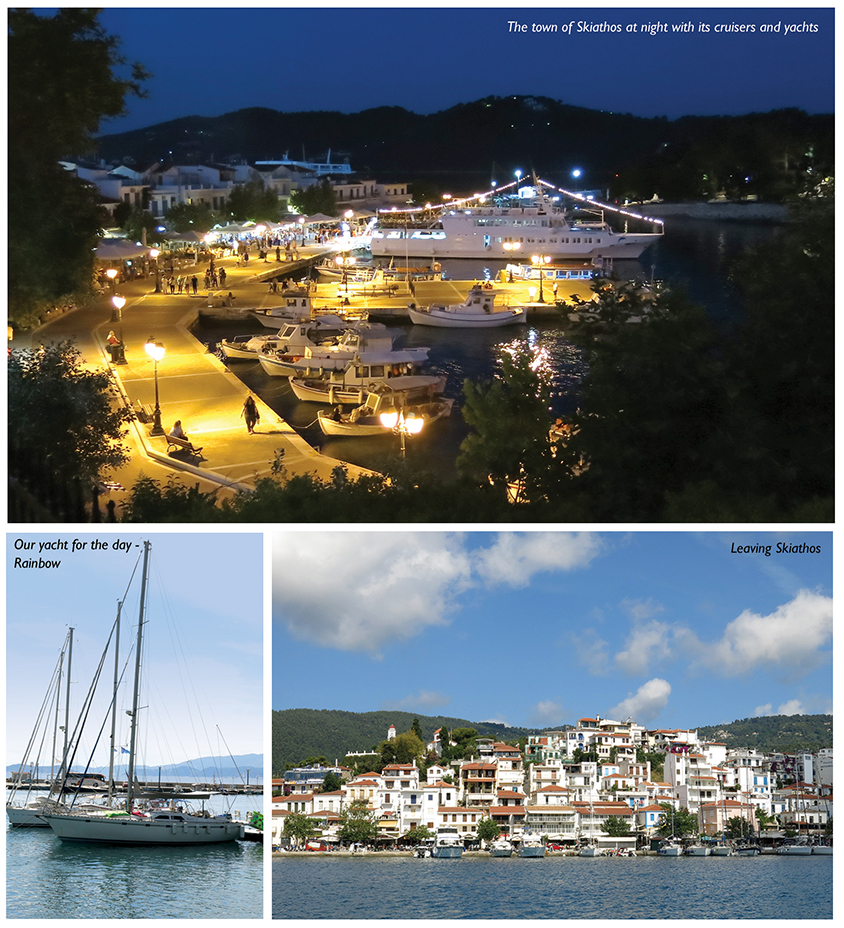 Here is the place to sit and enjoy a drink while watching the luxurious yachts and sailing boats. It is also the departure point for the daily sea trips around the island and for those who want to sail across to the nearby islands of Skopelos and Alonissos.

It was here that an evening encounter led to a day’s sailing. Ruth from Somerset with her partner Angelo, a native of Skopelos, are skippers on a sleek white Greek built 55 foot yacht named Rainbow. They invited me to join them and a few days later we met up at the port around 10 in the morning. We were joined by a family from Cornwall – Carl, Rachael and their eleven year old son Luke.

As the boat had a capacity for 12 passengers, we had more than enough space to sit under the canopy of canvas for shade or lie out on the deck to sunbathe.

The town’s tiered red-tiled whitewashed houses, with their blue painted flower laden balconies gleamed in the morning sunshine as we motored out of port.

Within minutes a dolphin swam alongside the boat invoking cries of excitement. 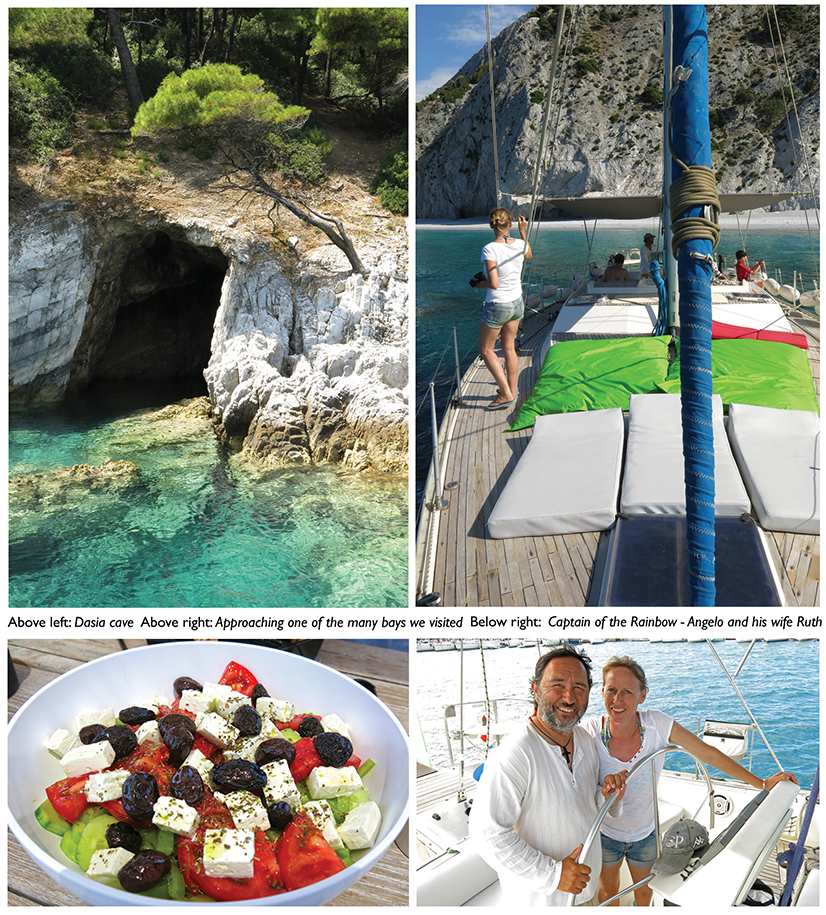 Captain Angelo is a qualified sailing instructor who has been sailing these waters since the age of 5 when he used to go fishing with his uncles. His local knowledge made for a great experience as we set sail to visit some of the hidden gems the islands had to offer. We anchored off some of the lesser known spots to swim in deserted coves and bays where tiny fish swam between our toes.

Dasia cave was one stop where it was possible to snorkel and swim to a little soft sanded beach. Later we sailed into the fishing port of Loutraki on the north west side of the island of Skopoles where Angelo’s family live. It did feel like a family affair as we all gathered around the table to eat lunch, cooked at a nearby taverna and brought on board by one of Angelo’s friends. There were stuffed peppers and tomatoes grown by Angelo’s mother, grilled aubergine and a creamy tzatziki dip, calamari rings, small fried fish, and chicken. All this was accompanied by the obligatory Greek salad with chunks of crumbling Feta cheese drizzled in golden olive oil. 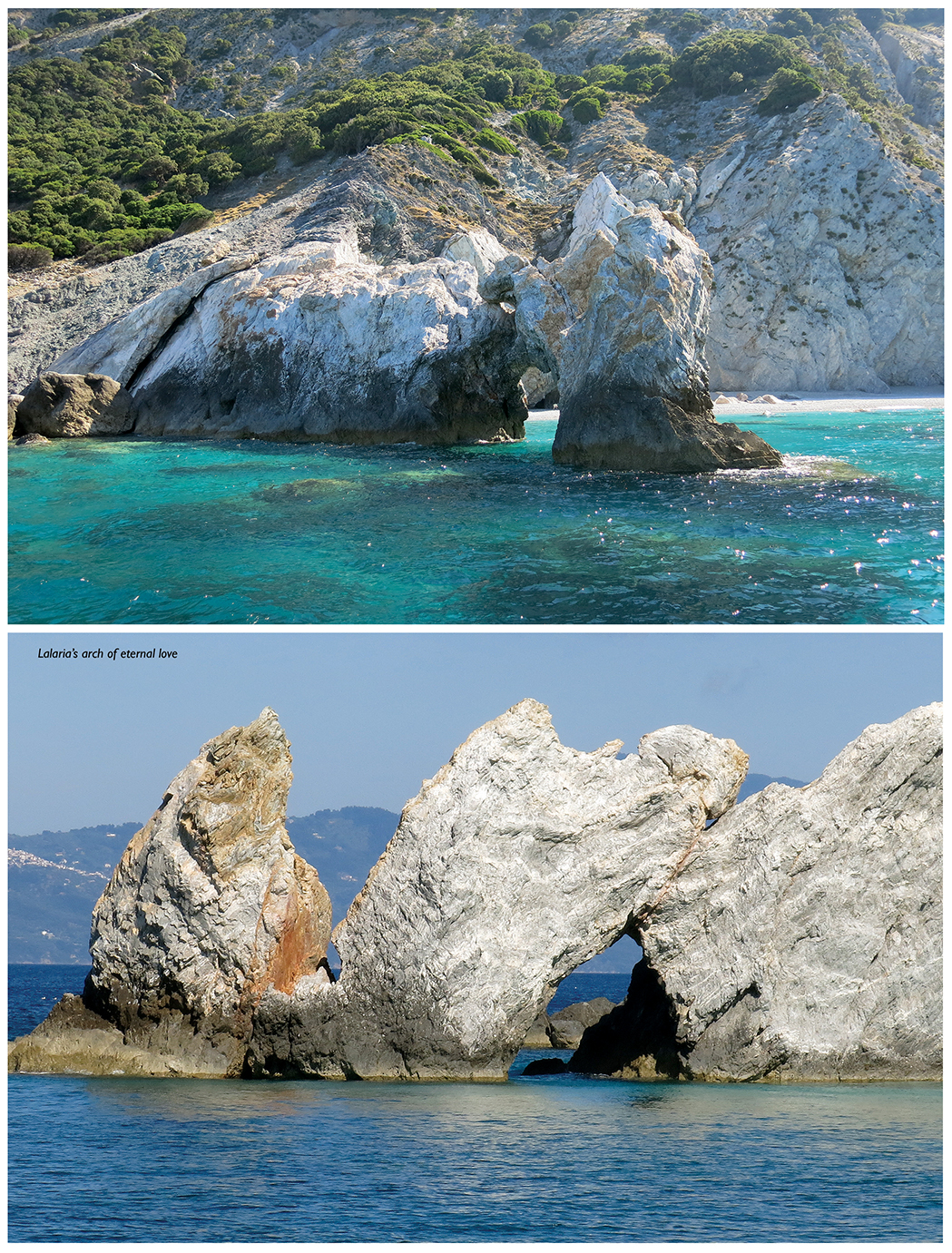 Afterwards we sailed past one of Skopelos’ most beautiful beaches – Kastani, where many of the scenes for Mamma Mia were filmed, then back to Skiathos to see the beach of Lalaria which is only accessible by boat. We dropped anchor in the turquoise, crystal clear water – on the beach the white pebbles were polished smooth by the sea. Here you can swim through the romantically named ‘arch of eternal love’ – a natural rock formation between the beach and sea, which appears on most postcards of Skiathos.

As with all good things, our day was coming to an end, although there was one last treat in store for Luke our young trainee skipper. Under the guidance and watchful eye of Captain Angelo he took the large silver wheel in his hands and with a huge smile on his face and the wind tousling his hair, he steered us safely back to port.

Travel to Skiathos by Thomas Cook

Flights from Bristol to Skiathos

Many thanks to Bristol Airport for parking www.bristolairport.com