A LOCAL TASTE OF THE MED 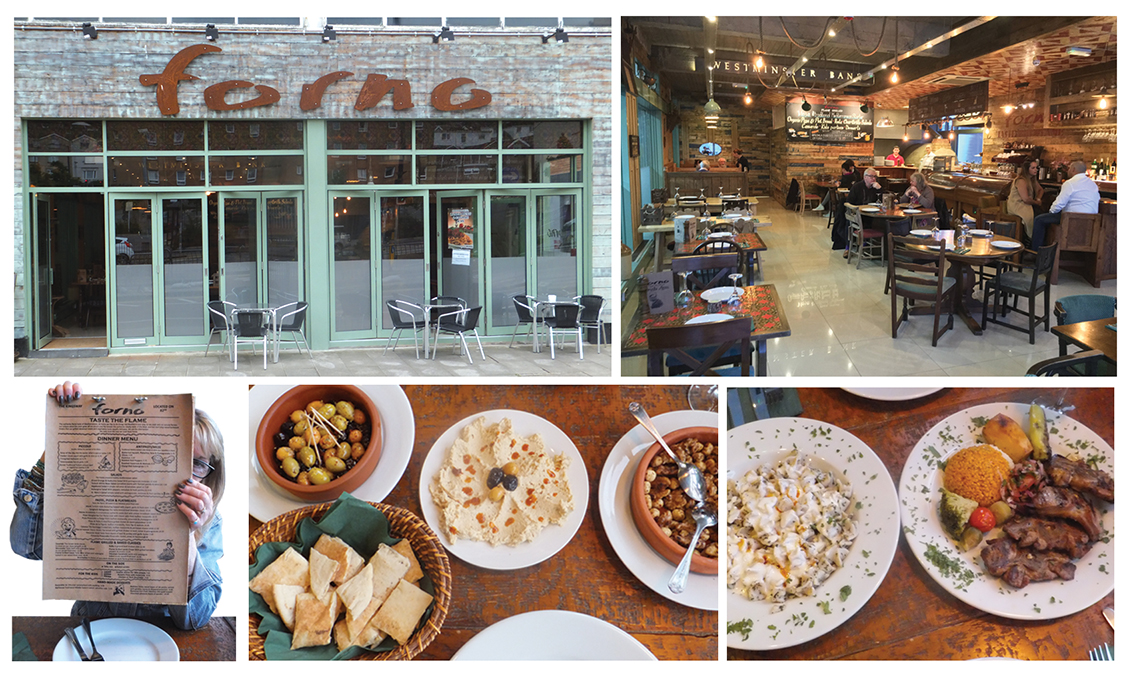 It is said that the British talk about the weather obsessively. Oscar Wilde said that conversation about it was the last refuge of the unimaginative. Research shows that 94% of Brits admit to talking about the weather in the past six hours, while 38% say they have in the past 60 minutes according to social anthropologist Kate Fox in her studies in 2010. Maybe if our weather wasn’t so bad, we wouldn’t choose to talk about it so much. Recently it’s been the hot topic of conversation for the very reason that it hasn’t been hot.

As I have been feeling a bit miffed that I haven’t had a Mediterranean holiday or any other sort this summer, I decided to find a taste of the sun in Swansea. As I waited at the traffic lights in The Kingsway my eye was drawn to a new restaurant at the top of Picton Arcade, with its chalky green bi-folding doors. The lights changed to green and I only had time to take note of its name – Forno. I continued my journey home contemplating what sort of cuisine this new addition to the locality could be. In Italy Al Forno indicates that the food has been oven baked such as a lasagne or pizza, but for some reason this Forno didn’t look Italian.

Not knowing exactly what to expect we dropped in for supper. The decor is distinctly rustic Mediterranean with little hints to its Turkish influence, with the patterned mats on the walls. Interestingly the buildings financial heritage is still visible in the ceiling space where you can still see the National Westminster Bank signage. Simon our designer and I met in Swansea College of Art many moons ago when it was located across the road from Forno, in what is now the Gwalia Housing building. I used to trot across the road to use the cash machine to take out £5 from my student grant – this used to cover all my expenses for the week- it was, as I said, many, many, moons ago.

We were greeted by a very welcoming waitress who introduced herself as Adina and who we later discovered, hailed from Romania. Adina explained that the menu was a fusion of mainly Italian, Greek, and Turkish cuisine. The wood oven gave the restaurant a distinctly authentic smell of a Mediterranean taverna, and so I settled back to make believe I was on a Greek Island.

The menus are heavy, and by that I don’t mean that they are long, but that the pages are mounted on slabs of plywood with wing-nut fixings – I wouldn’t be slipping this one in my handbag.

The small plates or starters had some fab additions to the usual hummus and olives, such as the roasted hazelnuts and walnuts. Such a simple dish but really quite wonderful – the natural oils from the nuts combined with a little sea salt made them really moreish. Never again will the hazelnuts be left at the bottom of the pack of mixed nuts! Another new flavour came from the Turkish dumplings. These were tiny little parcels of seasoned beef topped with yoghurt, garlic and mint dressing – if you like steamed Chinese dumplings you’ll love these. There are lots of the familiar dishes you’d expect to see such as lasagne, moussaka and of course wood fire cooked pizzas as well as an Ottoman inspired lamb casserole with aubergines and a classic Arabic flatbread topped with chicken, rocket and pomegranate flavoured with ras el hanout. Ras el hanout roughly translated means ‘top of the shop’ and is a blend of as many as 100 different ingredients, although most readymade mixes usually include up to 20 – such as cloves, fennel, all spice, cinnamon, cumin, cardamom, nutmeg, lavender and rosebuds.

We’ll definitely be back to try some more of the menu. Highly recommend that you try this great new addition to Swansea. 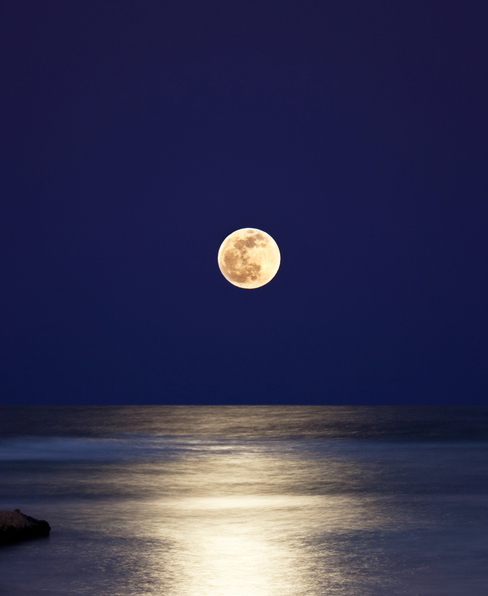 BY THE LIGHT OF THE SILVERY MOON

Following an exhausting afternoon on the beach on one of the very few hot days last month, we made our weary way up the hill from Rotherslade. Not being in the mood to go home and shake some pans, we popped around the corner to Langland’s for supper and a sun-downer. The evening was balmy, and we managed to arrive as another couple were vacating their outside table. And so it was that we spent a memorable evening watching a perfect full moon reflected on the sea, while eating al fresco.

Most people have a favourite restaurant, and often it isn’t just the food that makes it your go-to place for eating. The ambiance, the setting and the staff all play a huge part in the whole experience. Langland’s in my opinion ticks all the boxes, with the added bonus that the food is fab too. I like its relaxed atmosphere; there is no dress code – just that you must wear shoes – but that is a health and safety issue. Whether you are eating in the restaurant and want to get dressed up, or if like us you have come straight off the beach and are in sundress and shorts it makes no difference.

If you like a good meaty steak, then the 18 oz bone-in rib eye steak served with Béarnaise sauce and proper chips should fit the bill. The light tarragon hit from the little pot of sauce cuts through the rich beefiness of the steak, and of course it also has the advantage of providing the perfect place in which to dunk your chips.

Pasta is my weakness; I make regular trips to La Parmigiana in Duke Street to feed my addiction. Here you’ll find dozens of shapes, all suited to different types of sauce. Langland’s Seafood Scialatielli is a relatively new type of pasta. It was invented by Italian chef Enrico Cosentino in the late 1960s while he was working in a local restaurant on the Amalfi coast. If you think there are lots of varieties of pasta available today you’ll be amazed to learn that at the end of the 19th Century there were over 250 types compared with about 60 today.

Scialatielli is a short, thick linguine like pasta its name translates as ruffled, which is exactly how it looks – slightly crinkly and with a little furrow that perfectly holds the light sauce. The addition of fresh fish, seafood and the light creamy tomato sauce and I was a very happy girl.

Next time it’s a high tide, full moon and warm enough to sit outside, why not take the opportunity to enjoy a Mediterranean-like evening – no jacket or passport required. 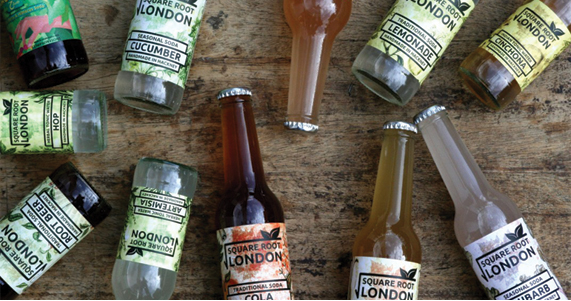 Last month we ran a competition to win a case of Square Root sodas. The lovely people at Square Root also sent me a box of 15 sodas to try out for myself. Being the generous soul that I am, and also because I wanted to get other people’s opinions, I divvied them up around TheBAY, clients and family.

Isn’t it funny how coincidences occur? One of the soda flavours was Artemisia – this was a plant I’d never heard of before. The next day I received copy from The Herbal Clinic for their monthly article which this month was on Eczema. One of their herbal remedies for this was………. Artemisia!

Chrissy Evans from Stephen Evans Optometrist was my guinea pig for this unusual drink. On first tasting she declared it was a little like tonic water and would probably make a lovely gin and it. A little later she said it was pleasantly refreshing and made a change from the usual fizzy drinks. Stephen tried out the lemonade and said it tasted ‘thin’. He quickly countered that with ‘but in a good way’. Most commercial carbonated drinks contain a list of ingredients as long as your arm, but this one was pretty basic – lemon juice, sugar from British sugar beet and water. It doesn’t get much more simple than that. My favourite was the ginger beer. It has a good gingery kick without the sticky sweetness associated with the ginger ale that comes in little bottles to add to whisky.

The more of the sodas I tried, the more I came to understand Steve’s ‘thin’ comment. We have come to accept commercially produced carbonated drinks that contain so many synthetic ingredients, that when we try something that is so very pure it has a completely different mouth-feel, and you don’t get any residue sticking to your teeth.

I’m hoping that some outlets in Swansea are going to stock Square Root Sodas very soon but until then you can order them on-line from Squarerootsoda.co.uk or from Wrights Emporium in Llanarthne where I first discovered them.

The winner of our competition to win a case of soda will be announced next month.