This month Charles delves into the history of one of Swansea’s oldest buildings – The NO SIGN BAR in Wind Street, and also tells us of his visit to the Night Vigil at Westminster Abbey on 1st July.

If you have a question regarding YOUR family history that you would like to put to Charles, he can be contacted at swanseafamilyhistory@yahoo.co.uk – he’d be delighted to hear from you. 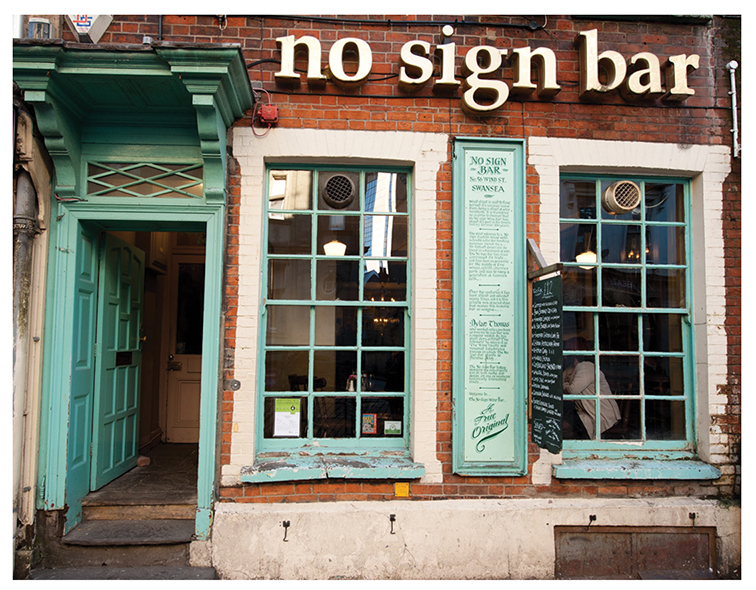 I will look at two different avenues of information for one of Swansea’s oldest buildings. Firstly what information the records shed light on, and secondly what building is willing to give away! The building in question is the No Sign Bar, located at 56 Wind Street.

Where to start? The first thing was to look at maps of the local area. The first map that was published was in 1852, Swansea Local Board of Health – Survey of the Borough of Swansea. The purpose of this series of maps was for the creation of drainage in Swansea and to show how many properties were sharing privies. Notable buildings were named on the maps, and surprisingly the No Sign, isn’t mentioned as a public house. It was located two doors away from the Cambrian Newspaper offices. Could there be a mistake? I then looked at the next maps published, in 1878 – this is the first one to be published from the Ordnance Survey, but still 56 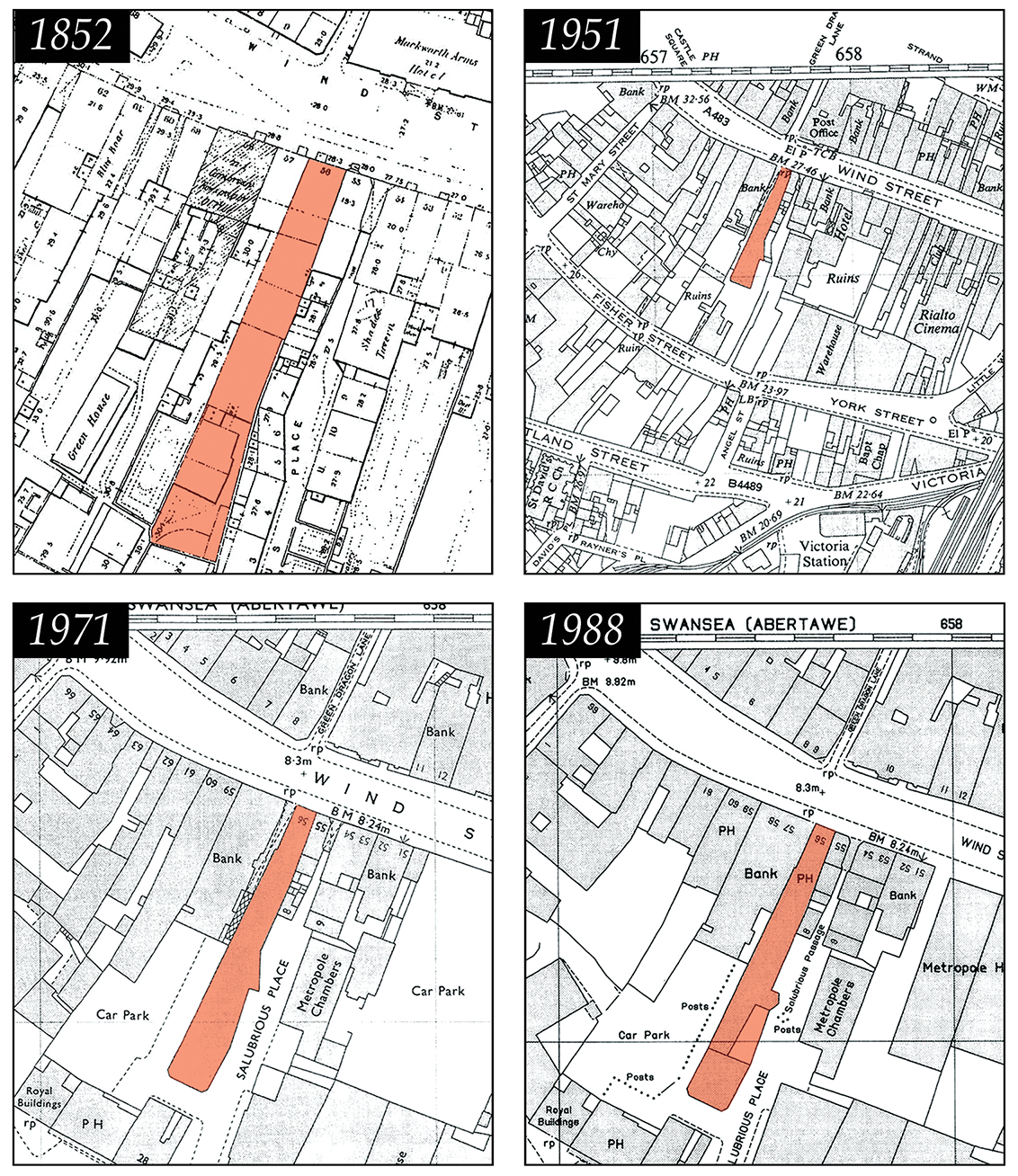 Ordnance Survey maps would have been published when there was a major change in an area. Maps are very useful to a researcher as they show the changes made to a building.

My next line of enquiry was to look at a variety of trade directories, which hopefully would give me the answers I required.

What is a trade directory? It’s a book that lists all the businesses and business people located in a town. Swansea library have a good selection, the earliest dating back from 1816 to 1970.

The three examples I have used have been the 1856, Pearse’s Swansea Directory, which indicate that 56 Wind Street, was a Wine and Spirit Merchant under the owner-ship of William Clark. 1910/11, Purrier’s Swansea Directory, is listed by road and 56 is now a Wine Spirits and Importers, under the ownership of F. C. Williams. Also present is a stock broker, William Morgan Davies.

1930/31, Swansea Directory, has both the business directory and road listings, both have 56, as a Wine and Spirit Merchant, still under the ownership of F. Clarke Williams, but what else? The road listings mentions, accountants, Tribe, Clarke, Cawker, Owen & Co. are in the same building.

Another source of interesting information is the use of telephone directories, which were first published by The Telephone Company in 1880, and then printed every 2 years. You can let your fingers do the walking on this one. Anyone who has walked down Wind Street, and looked at the upper windows will have noticed the words – Munday’s Cocktail Bar. 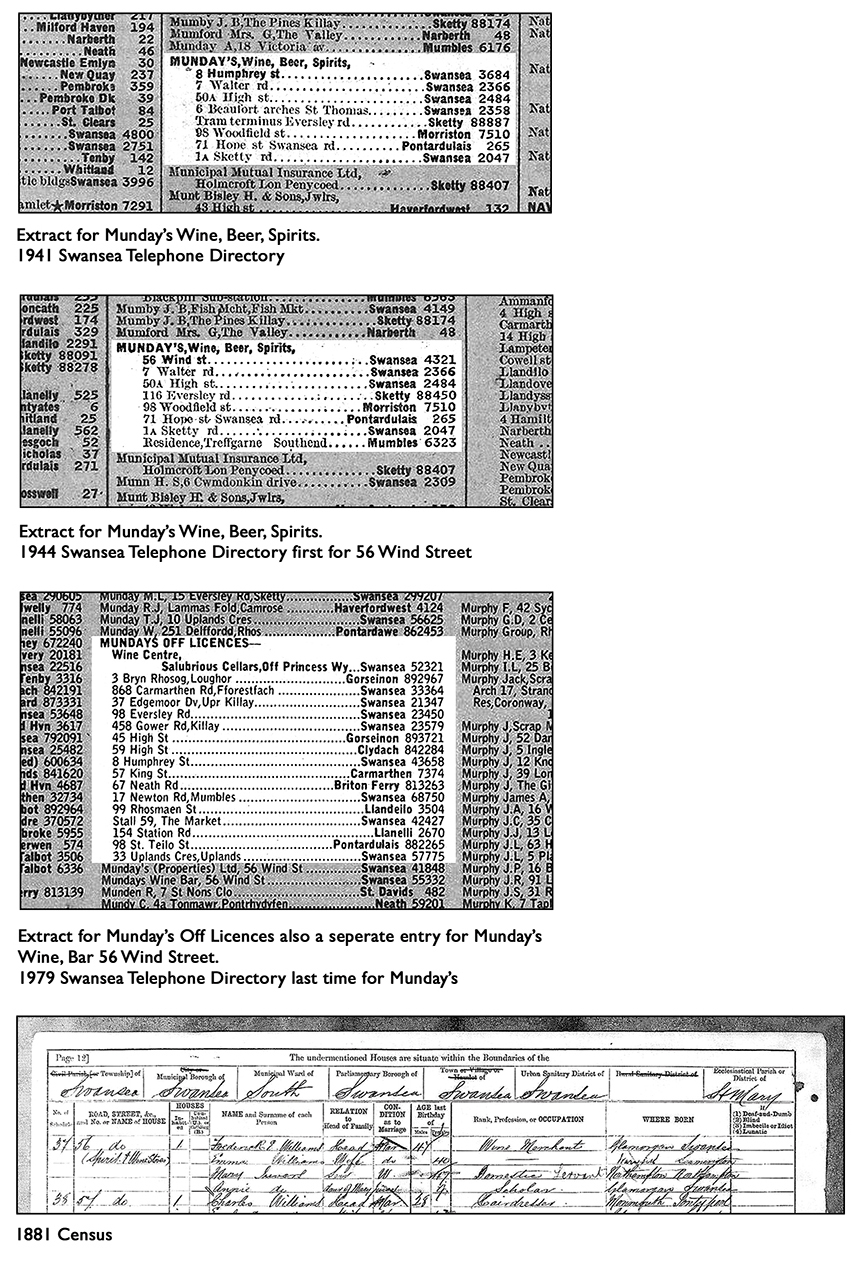 The earliest telephone directory in the library is dated 1941. I found Munday’s Wine, Beer, Spirits, at various Swansea business locations, but not 56 Wind Street. 3 years later, 1944, Munday’s Wine, Beer, Spirits is still at various Swansea locations, but for the first time is listed at 56 Wind Street, telephone 4321. Business must have been good for Munday as in addition to the wine merchants and off license shops there is also Munday’s Properties located at 56. This is the first time that it’s mentioned as a Wine Bar, telephone 55332. By 1980, Munday has all but disappeared from the tele-phone directory. I understand that Tim Munday was tragically killed in a car crash whilst in France during the 1980s.

Another important source of information is the census. I will write a series of articles next year where I will cover censuses in more depth, though for this ex-ample I am using the one of 1881. Living at No 56, is a Frederick E. Williams, and his wife, Emma.

Who is he? He was one of William Clarke’s nephews. Frederick was an art lover who had taken part in amateur productions at the Theatre Royal, Temple Street. He died in 1901. It isn’t the first time that No Sign Wine Bar was to have a connection with the stage – in 2009 the building was used as an Italian restaurant Angelos in the ‘new’ Sherlock for the BBC.

Let’s now turn our attention to the building of 56 Wind Street. First we can look at the overview of the whole road. Wind Street today follows the same route as in medieval times. Salubrious Passage was once the town ditch, watch you don’t fall in! Moving forward to 1941, Wind Street survived the destruction that was inflicted by the German Luftwaffe bombing of the 3-nights blitz. Back to the present, we are walking down the road towards the seafront, the buildings on the eastern (river) side date back to the 19th century. The buildings on the other side of the street are somewhat older, typically dating from the Georgian period, with some buildings even dating back to medieval period. 56, is one of these buildings. Step through the front door of the No Sign and you have the feeling that you have stepped back in time.

On the wall above the fire place there is a portrait of William Clark, keeping a watchful eye over the place. There is certainly an air of the culture from bygone Swansea. The Main Bar in the lounge area provides a tranquil atmosphere. During the 1930s, the No Sign Bar became the hotspot for Dylan Thomas and his contemporaries “the Kardomah gang”, downstairs is the wine cellar that dates to the1400s. By the 1690s it was under the ownership of Richard Gwynne the cellars are newly renovated and now named The Vault – it’s where some of the best live music can be heard. The vaults were to feature in Dylan’s short story “The Followers”. Upstairs is Munday’s Cocktail Lounge, a private bar, named after Tim Munday. This elegant bar is used for private parties from 20 to 100 people.

A finally note of interest, the No Sign Wine Bar, gained its name by not hanging a painted name board outside. In 1393 King Richard II compelled landlords to erect signs outside their premises. Pictorial signs would have been used during the medieval period, as the population would have been illiterate. Today the sign bears the name both in the words and pictorial representation.

I received an email from Mr Meilyr James, proprietor of The Herbal Clinic, King Edward Road, regards to my overnight stay at Westminster Abbey of the night of June 30th – July 1st. It wasn’t a ticket event, as all were welcome during the night 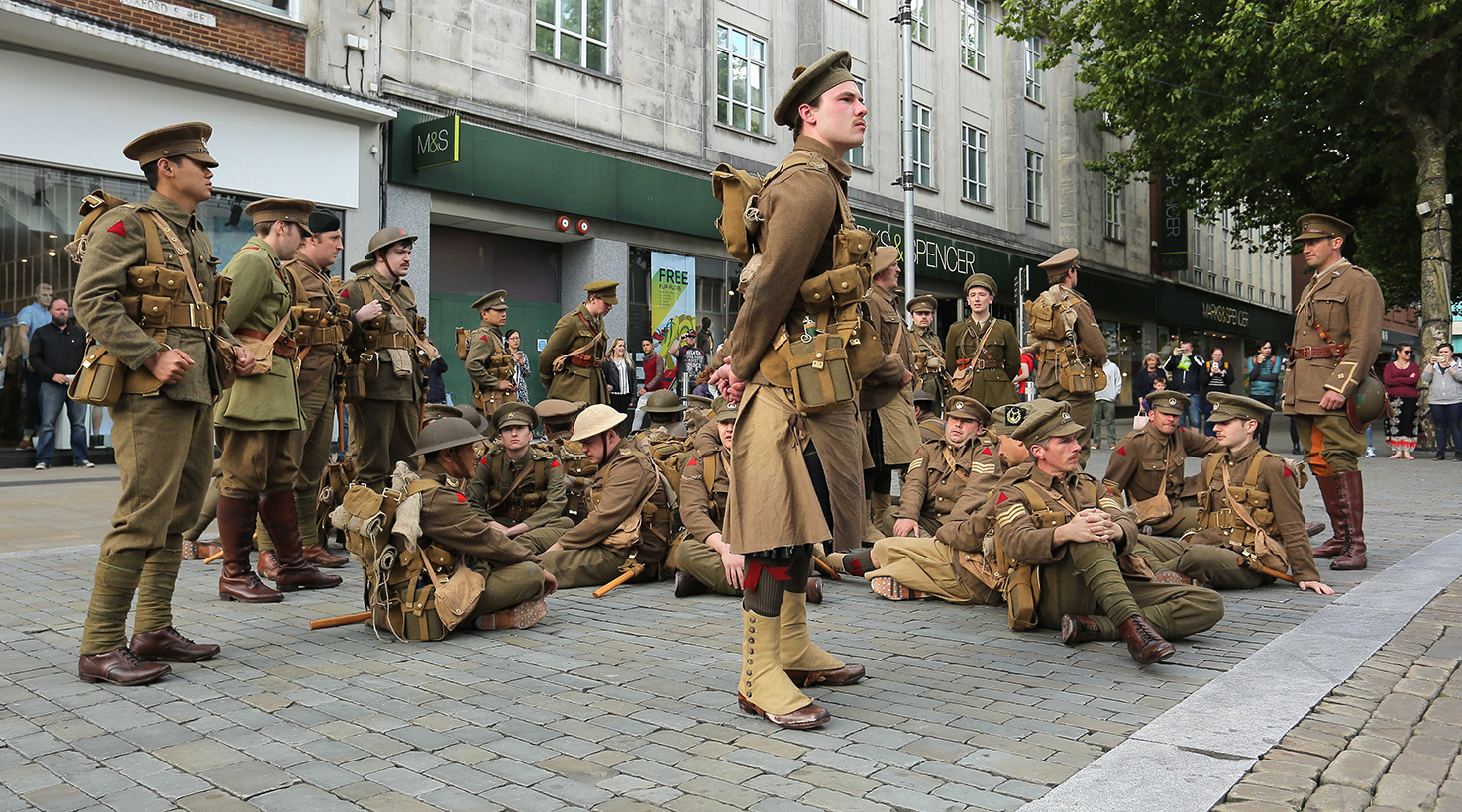 Last November the Commonwealth War Grave Commission opened a ballot box for those who wanted to apply for tickets to attend the Somme centenary ‘celebrations’ at Theipval Memorial, northern France. I applied, but was not successful, as you can imagine there were thousands of applications.

Nearer the time of the July 1st, I had a look at what other ‘celebrations’ were being carried out in the UK, locally to me in Surrey or Swansea. It was then that I noticed that Westminster Abbey was having an all-night vigil. I made a phone call to the Chapter Office, to see what the score was and if anyone could attend. I was told that there was a televised service which the queen was attending during the early evening of June 30th, but otherwise I was more than welcome to attend the all-nighter.

This was the second time in the long history of Westminster Abbey of having an all-night vigil. The first time was some 50 years back during the Cuban Missile Crisis

I travelled up to Westminster Abbey and arrived there on the stroke of 23.00 o’clock, shown to the Nave, where the Unknown Warrior is buried. During the course of the night there was a change of watch around the grave. Each watch lasted 15 minutes, with the last watch at 07.15. During the night there was a handful of people sat in silent mediation. By morning the Nave started to fill up. The short service in the morning was being covered by the BBC. 07.25, there was a bombardment fired off in Parliament Square, lasting for a 100 seconds. 07.27, the actor, Luke Thompson, read an Account of the Battle from an officer whom was present at the time. Then finally 07.30, a 1915 issued trench whistle was blown thus marking the ‘zero-hour’ the moment the Battle started in 1916. The Very Reverend Dr John Hall, Dean of Westminster, conducted a very short service

The vigil was held to remember those who lost their lives during the battle, amounting to over a million lives. 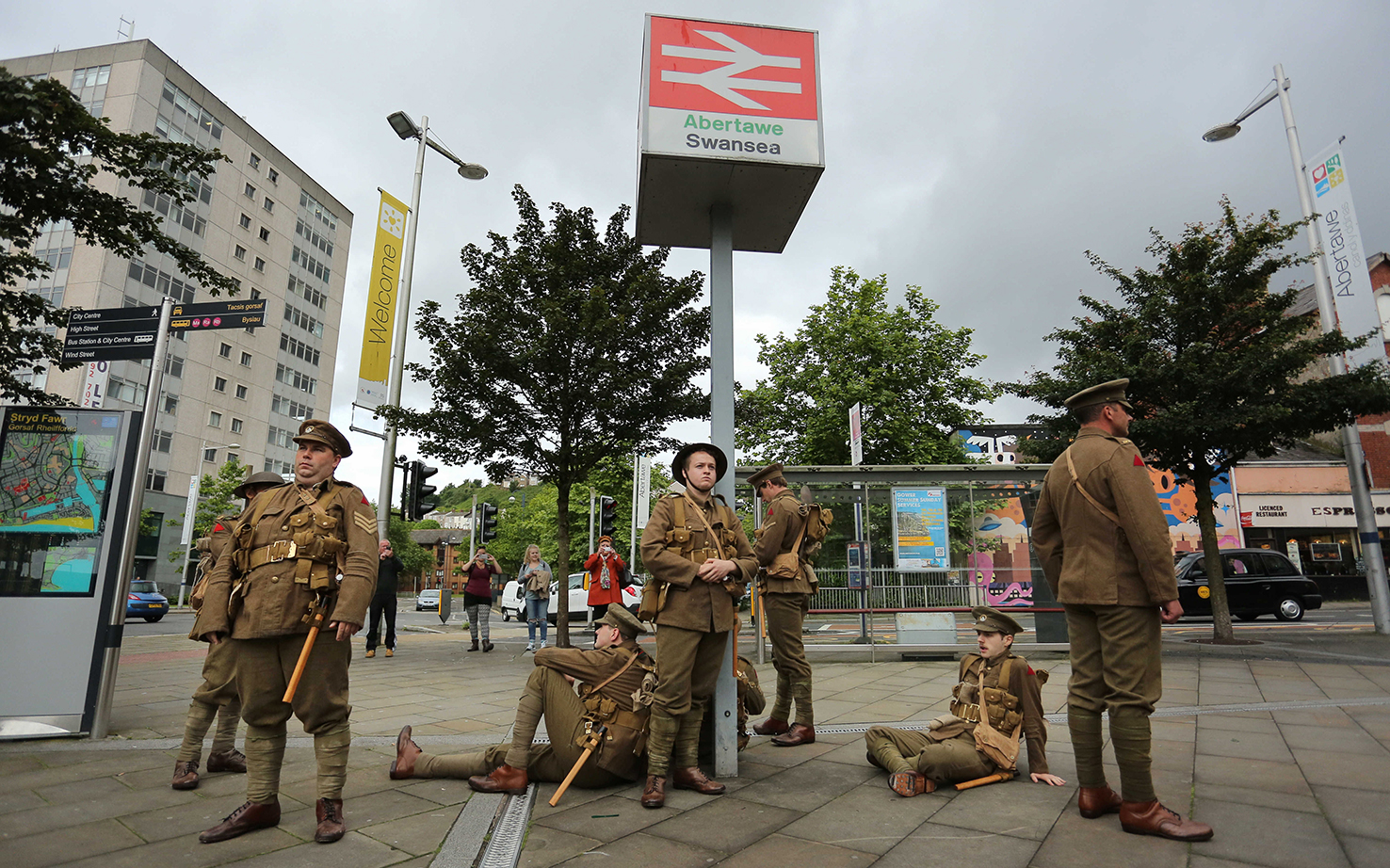 Men in World War I uniforms outside Swansea Railway Station

During the morning of the July 1st at various train stations around the country including Swansea and Waterloo where I was travelling back to Surrey there were groups of actors placed in silent tableaux depicting soldiers of July 1st. They did break into a rendition of ‘We’re Here Because We’re Here’ a popular song sung in the trenches. I understand that in Swansea, a group of ‘soldiers’ stood at and along the Dyfatty Bridge. This must have been a impressive sight to behold. A fitting conclusion to this historical day.

Last month I challenged you to name all 118 places of worship in Swansea. Well done Mrs Gaynor Mitchell of Tycoch who named 35. The full list is listed below: