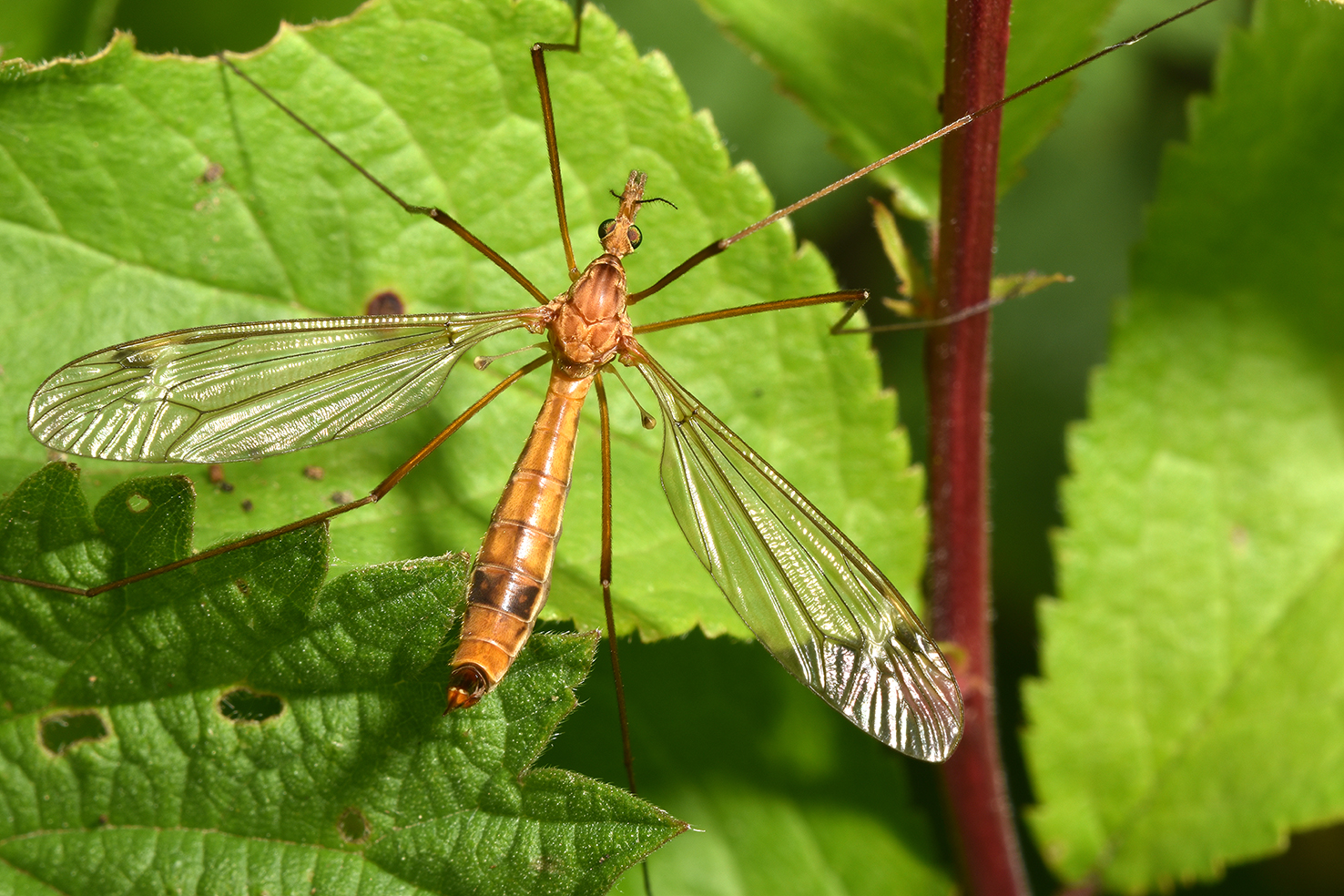 Reminiscent of a spider-like monster-mosquito, the sight of a cranefly – especially when it is flying in its unmistakeable bumbling fashion – frequently incites fear, or at the very least a sense of unease. In reality neither is warranted, as there are few more harmless and innocuous creatures in existence than the humble ‘daddy longlegs’, whose sole aim in its few days of adult life is to pass its genes to the next generation.

Not only is their resemblance to some unpopular invertebrates doing craneflies no favours, there is also an urban myth of ‘daddy longlegs’ having lethal venom (though with fangs too short to pierce human skin), which is not helping their popularity. This myth is entirely untrue. Craneflies do not have venom of any kind. The other two animals which are also sometimes referred to as ‘daddy longlegs’, namely the harvestmen and the spindly-legged spiders of the family Pholcidae, do not possess unusually potent venom either. In fact, harvestmen do not have any venom, whereas Pholcids have venom which is strong enough to incapacitate their prey, but no stronger than that of any other spider. There are no records of any of the three (entirely unrelated) ‘daddy longlegs’ ever causing any harm to humans. The one thing they have in common, though, is that they are all able to deliver a good tickle!

At first glance, having long, unwieldy legs which break off at the slightest provocation does not seem like a good idea, but it can be a very effective defence mechanism. Fairly large and otherwise defenceless, craneflies make appealing prey items. If a predator tries to take hold of the tasty morsel, however, it is quickly distracted by the tangle of legs and will often grab one of the legs instead of the cranefly’s body.

At this stage the leg promptly detaches itself to remain in the jaws of the attacker, while the rest of the cranefly takes off to live another day. Obviously, this ‘leg for a life’ strategy would quickly render a long-lived animal severely incapacitated, but it serves the cranefly well during its mere fortnight of adult life.

In fact, the adult life of craneflies is so short that many species never feed, and do not even possess functional mouthparts with which they could do so, instead relying solely on fat reserves accumulated during the many months they were larvae. Those that do feed only sip small amounts of nectar to provide a little extra energy. Craneflies’ sole aim during the few days they spend in their adult form is to mate and for the female to lay her eggs.

It is easy to tell male and female craneflies apart by the shape of the tip of their abdomen. This is broad and blunt in males (as can be seen in the male Tipula paludosa in photo 1) and narrow and pointy in females (as in a female of this species in photo 2). The point is due to the presence of an ovipositor in the females, which is usually small but can reach menacing-looking proportions in some species, such as the uncommon Tanyptera atrata (photo 3), which lays its eggs deep into rotting wood. 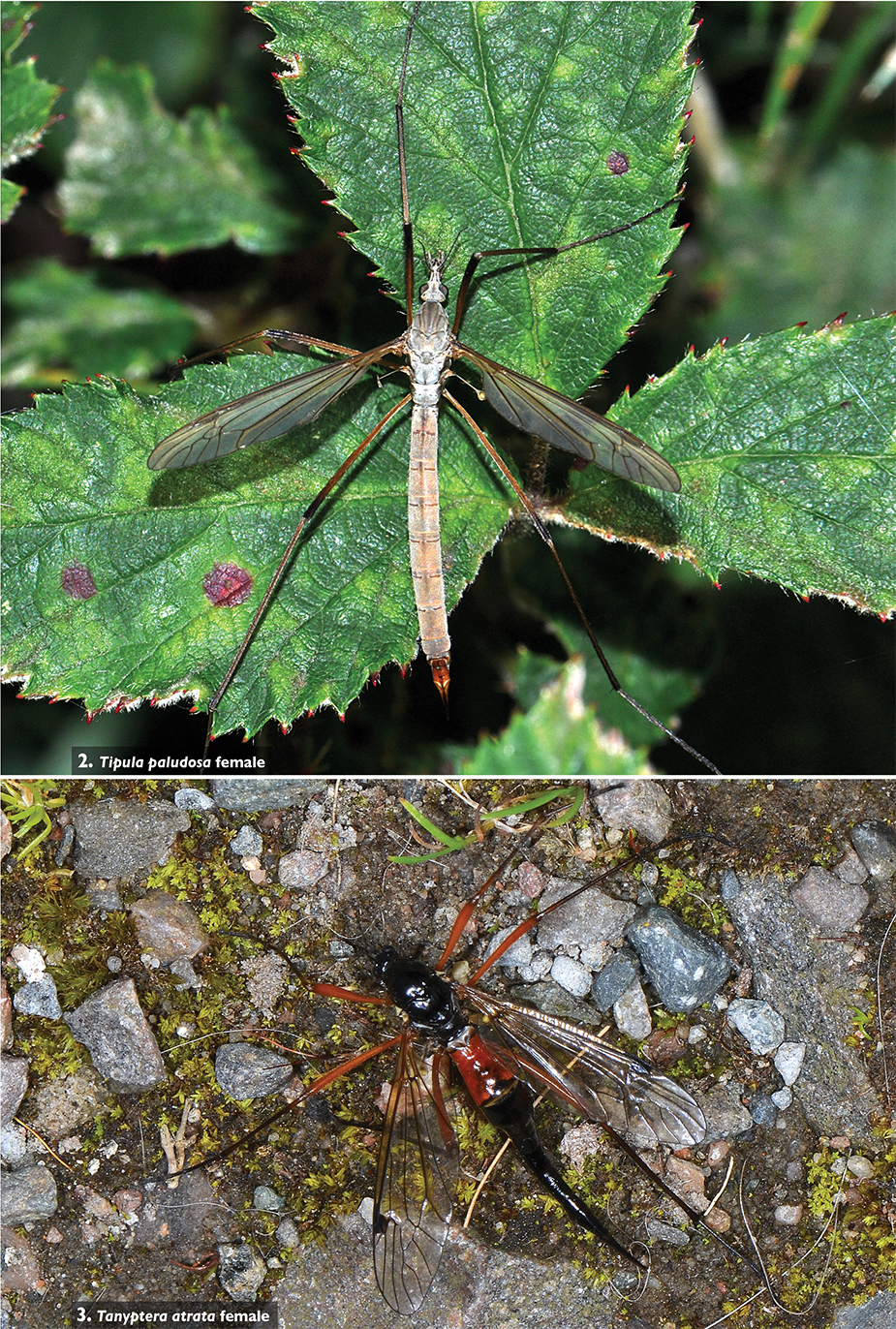 Courtship and mating in craneflies is a complicated affair which follows strict rules. If at any stage either of the partners does not respond correctly, the process is abandoned. For example, when a male first makes contact with a female he grabs one of her legs with one of his feet. If she does not respond to this approach by raising another of her legs, the male will withdraw. Only if she responds positively by lifting a leg will he be encouraged to proceed. 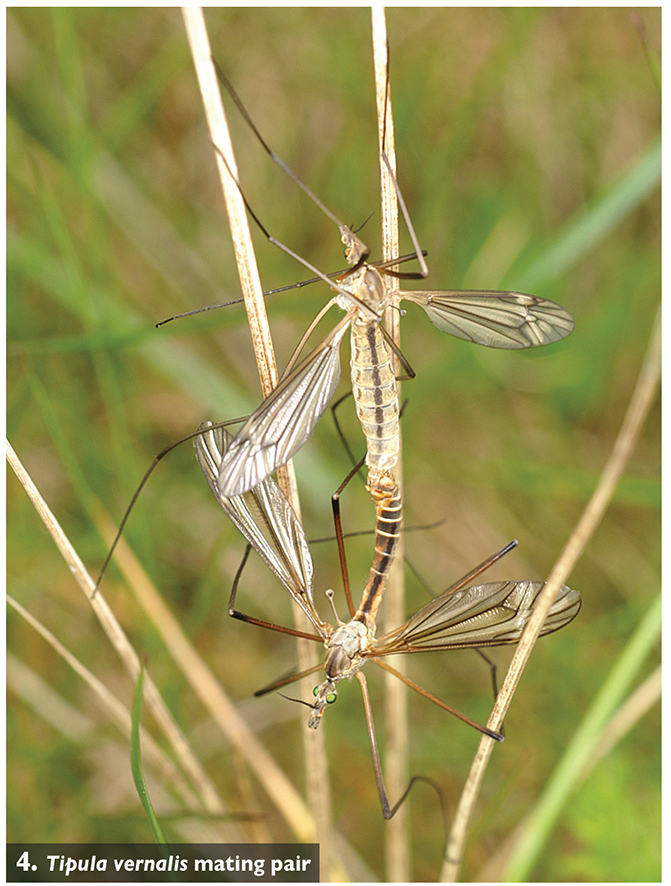 The exact sequence and nature of the subsequent steps of courtship varies between species and can include further leg grasping, mounting and the male touching the back of the female’s head with his mouthparts before culminating in the typical tail-to-tail mating position (photo 4), which can be maintained for a considerable time. In some species of cranefly, the males possess structures on their genitals with which they are able to generate vibrations, and they have been documented to produce these in regular bursts for prolonged periods while in the tail-to-tail position.

After mating, a female cranefly sets off to find suitable spots to deposit her several hundred eggs. Depending on species, this may be among the mud and organic debris in shallow fresh water, in damp soil, in a tree hollow filled with wet leaf litter, or in rotting wood. While the larvae of most species feed on decaying plant matter, a few will also eat living plant tissue, usually roots. When the latter occur in large numbers, they sometimes cause noticeable damage to plants grown by humans. These larvae are known to gardeners as ‘leatherjackets’ because, like the majority of cranefly larvae, they are brown and have very tough skin (photo 5).

While yellow patches in lawns (one of the more common manifestations of leatherjacket damage) can be annoying, leatherjackets rarely cause severe damage, and they are themselves prone to being attacked by predators. In fact, they are among the most frequently caught invertebrates taken by jackdaws and starlings feeding on lawns, and often the birds cause more damage to the sward than the larvae they are hunting for.

When contemplating one’s temporarily tousled turf, it is important to remember that of the 327 British cranefly species, it is only a handful of ‘black sheep’ that ever attract any attention. 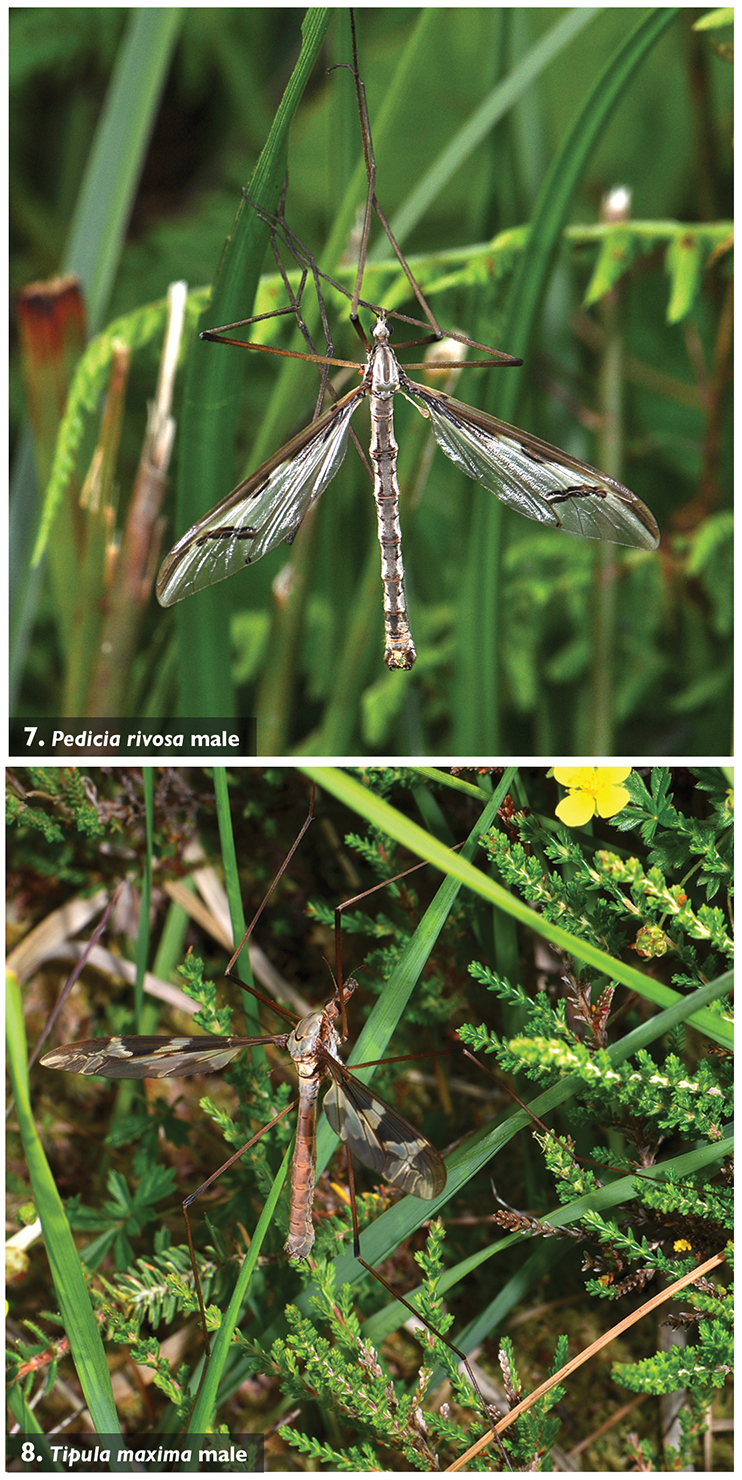 The majority of species go about their business entirely unnoticed and are important contributors to leaf-litter breakdown as well as valuable prey items for a wide range of predators, not just the turf-tousling birds mentioned above.

Many cranefly species are rather similar in appearance and require detailed, sometimes microscopic, examination to tell them apart. One such species is the elegant Tipula lunata in photo 6 (see pic at the beginning of this article). In this photo the modified hindwings typical of all flies (known as halteres) are particularly clearly visible. Although small, the halteres are essential to flight, performing important sensory and stabilising functions.

Some craneflies, for example the hairy-eyed craneflies of the genus Pedicia, have distinctive wing patterns which help with identification. One of the more common British hairy-eyed craneflies is Pedicia rivosa (photo 7). An orange parasitic mite has attached itself to the male in this photo just above his left middle leg.

The largest British species (and the largest of all British flies), the Giant Cranefly Tipula maxima, (photo 8) is virtually unmistakeable by its size alone, reaching a wing-span of up to 60 mm and a leg-span of 100 mm. The identifica-tion can be confirmed by the wing pattern. There is often some slight colour variation between individuals (photo 9). 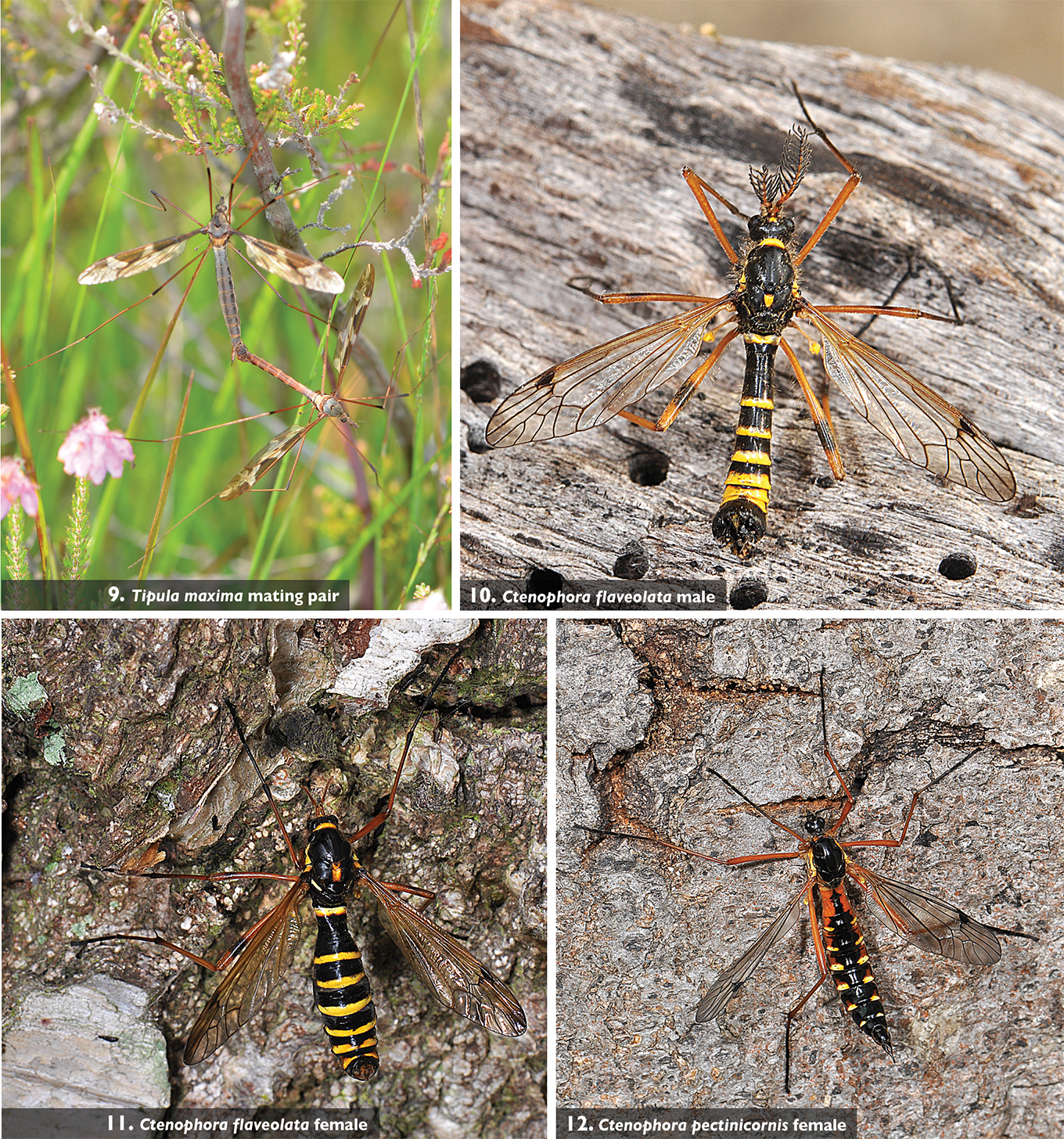 Craneflies of the genus Ctenophora, of which there are only three in Britain, are unusual in that they mimic wasps. Unfortunately two of these three striking species, the beautiful Ctenophora flaveolata (photos 10 and 11) and the similar Ctenophora ornata, are rare and can only be found in ancient woodlands in the South of England. The more subtly patterned Ctenophora pectinicornis (photo 12) is uncommon but is occasionally found in Wales, again in and around ancient woodlands. Despite their warning colours, these craneflies, too, are entirely harmless, and are a joy to observe for anyone lucky enough to en-counter them during the few eventful days of their adult lives. During their main flight period, scientists regularly travel from far and wide to attempt to study and photograph these elusive insects.