There are around 55 comic book alfresco artworks dotted across Brussels, and apart from requesting to see Asterix, Tintin and Lucky Luke (a cowboy name-checked in a song by French hip-hop artist MC Solaar called ‘Nouveau Western’…the song also mentions the Dalton Brothers – see final page of this article) at some stage, I leave the itinerary to my guide, Didier.

It turns out to be a wise decision, as by the end of the day it feels like I have made some new friends and ventured to parts of the Belgian capital which would otherwise remain undiscovered.

While Brussels is the birthplace of Tintin creator Hergé and Smurfs creator Peyo, the route, started in 1991 to regenerate rundown areas, celebrates a wider Franco-Belgian comic (bandes dessinées) culture, with which I am almost completely unfamiliar. 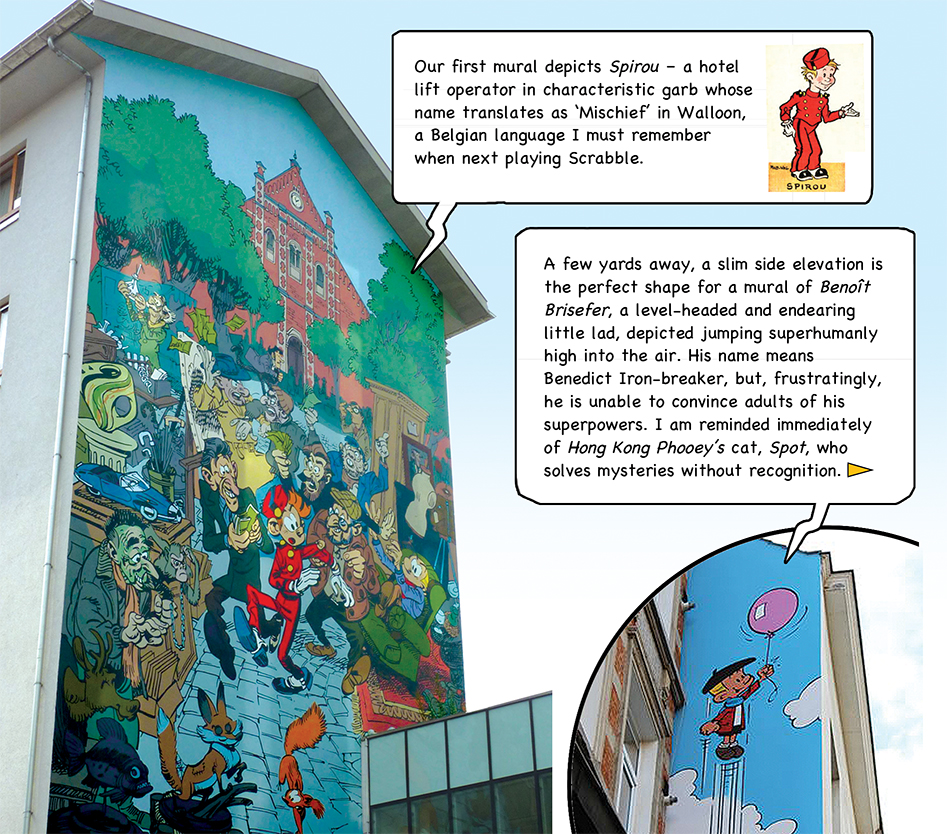 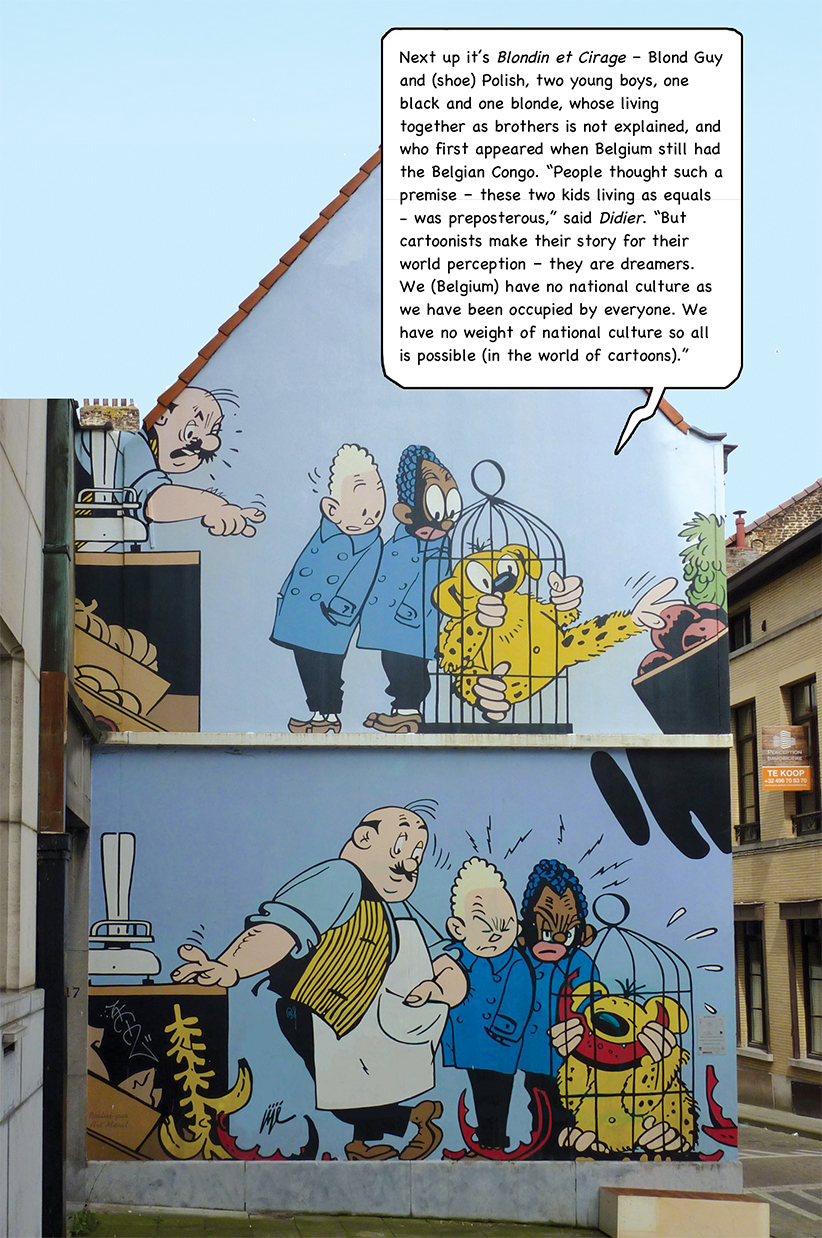 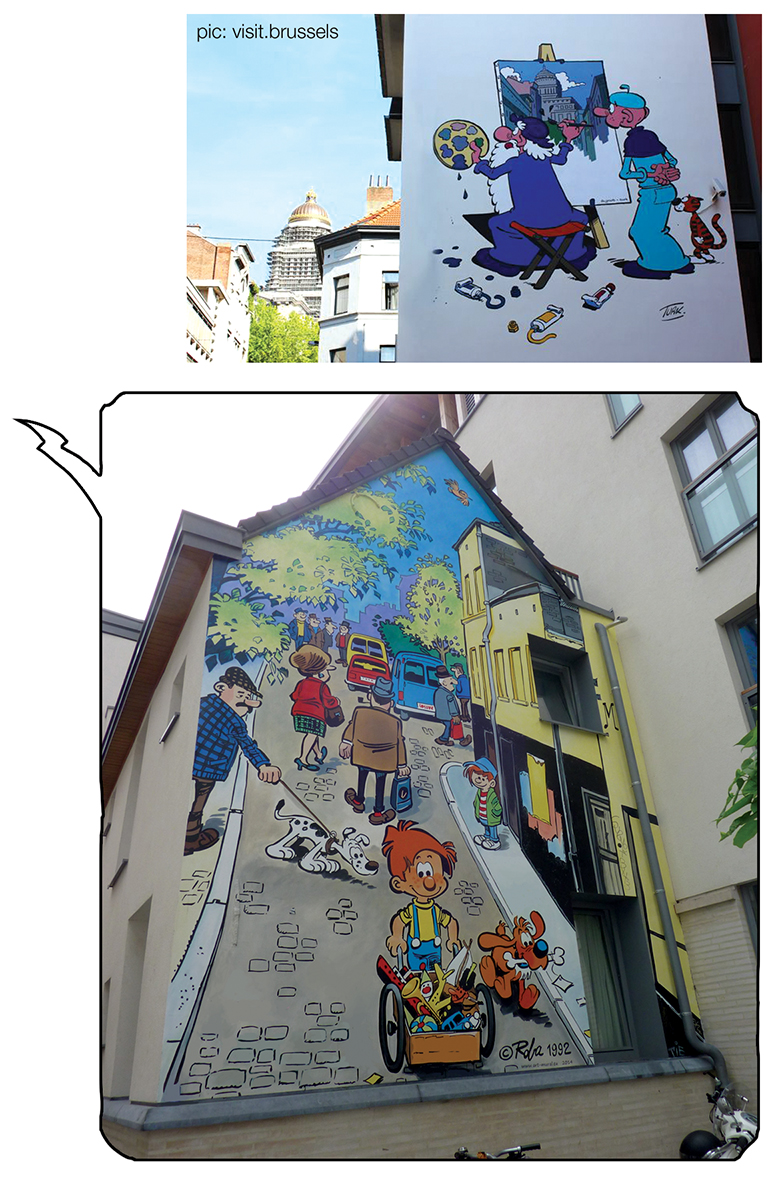 This (literal) blank canvas is then perfectly illustrated by our stumbling upon a new mural that even Didier hasn’t seen before. Here a matter of weeks, it shows a medieval artist called Leonard – who has more than a passing resemblance to Da Vinci – painting Brussels’ Justice Palace, which is the actual view from this spot. It’s neat how some murals incorporate real-life surroundings – which is so in the next mural! Boule – a young boy – and Bill – his cocker spaniel (based on the artist’s son and dog) are shown returning from the nearby Marolles Flea Market – Boule’s wheelbarrow is laden with the toys he has bought. This mural was one of the route’s first; originally painted in 1992, it had to be repainted after being destroyed, and now the window in the wall on which it is painted is a feature of the mural.

Heading to the next mural, I am struck by the shabbiness of the apartments, which remind me of brutal Soviet-era architecture in Kaunas, Lithuania. Didier informs me these buildings were badly made from cheap materials to accommodate immigrant workers immediately following Belgium’s 1964 labour treaties with Morocco and Turkey. It is fascinating to see the deteriorating physical manifestation of the consequences of an agreement signed 52 years earlier.

Didier then explains how Belgium had a guest worker programme with Italy in the 1950s; Googling this later, I discover 136 of the 262 miners killed in a 1956 disaster were Italian.

Belgium’s social history is all around me and it is enlightening to venture far beyond Brussels’ tourism staples of beer, waffles and the ludicrously over-rated bronze sculpture of the Mannekin Pis.

In our pre-trip email exchanges, Didier had informed me that sometimes cartoonists incorporated real people in their work, later showing me how Eddy Merckx (Brussels born, five time Tour de France winner (the joint record) who has a Brussels Metro station named after him) was depicted as a courier in Asterix in Belgium, the story that Asterix (and Lucky Luke) creator René Goscinny was working on at the time of his untimely death. (The script and artwork were finished by cartoonist, Albert Uderzo, who drew rain into the comic from the point of Goscinny’s passing, in tribute and as a spoof of Belgian weather.) 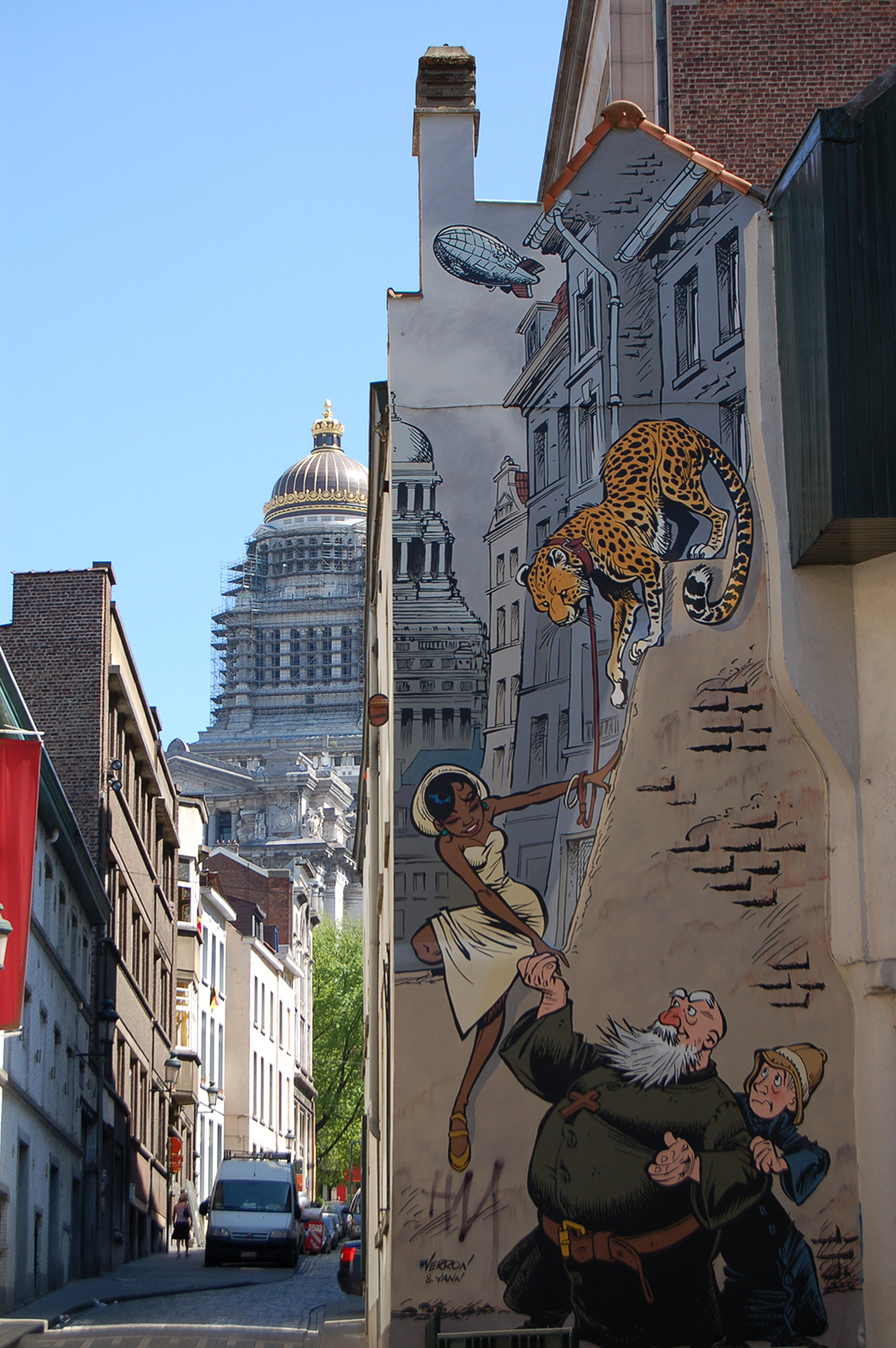 Little, however, had prepared me for a mural in which dancer Josephine Baker – and her pet cheetah Chiquita – are helped down off a ledge by missionary Odilon Verjus and his timid disciple Laurent de Boismenu. Quite wonderfully, the afore-mentioned Justice Palace features in the mural’s background and its backdrop, and standing in the right place makes for a photo wherein the Palace is half mural and half real-life building.

The mural also features a zeppelin – doubtless an echo of an unrelated storyline; I suspect the mural route’s artists had – and still have – much fun adding cryptic cross references. 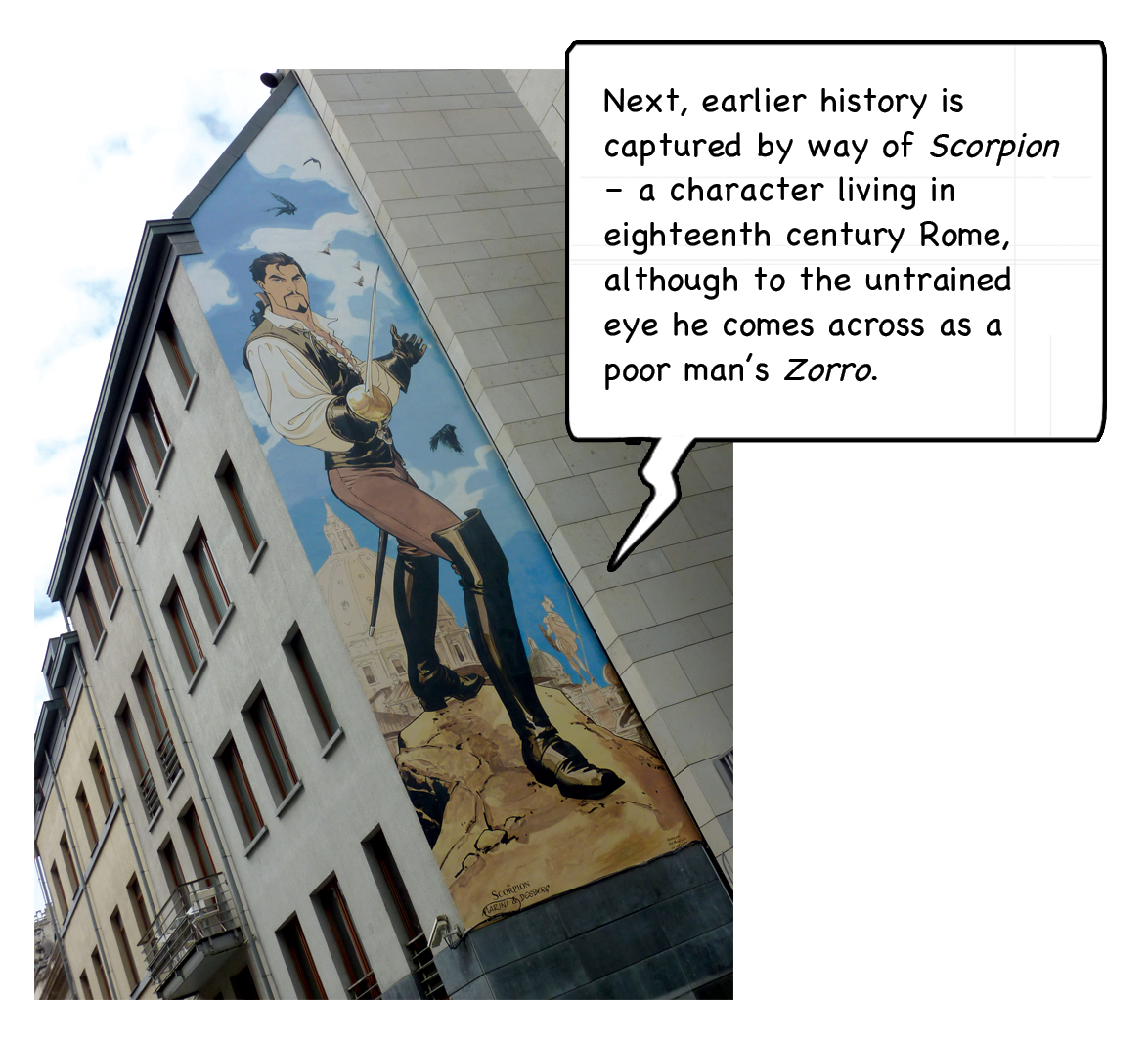 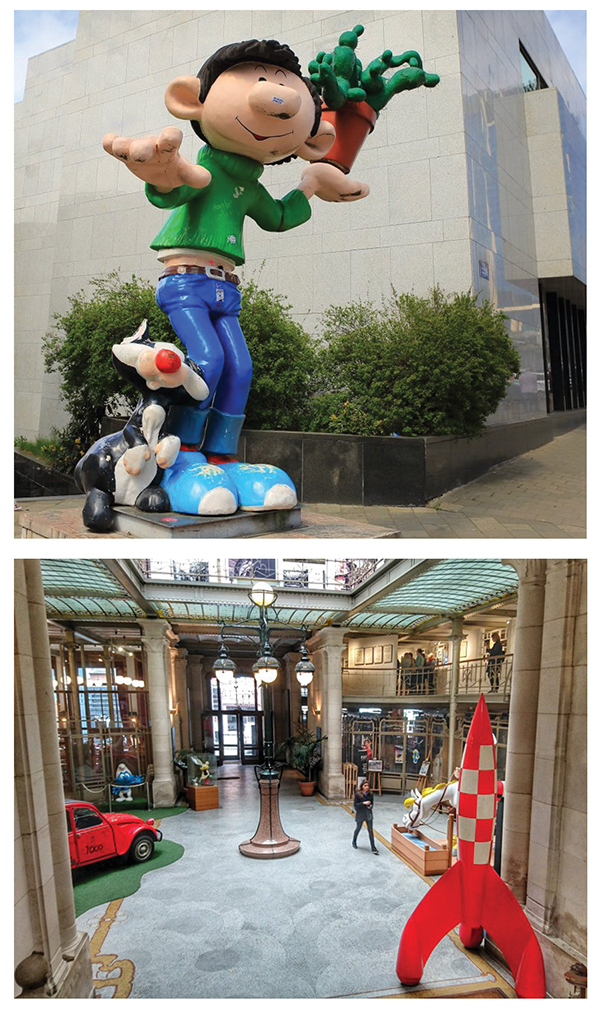 Nearing the Belgian Comic Strip Centre we encounter a massive statue of Gaston Lagaffe, (right) a hapless office junior, in keeping with the genre’s fondness for antiheroes.

The centre is housed in a beautiful art nouveau building, formerly a department store, designed by renowned architect Victor Horta.

Its entrance features a Citroen 2CV (from Boule et Bill,) Asterix, a Smurf, Lucky Luke on his horse Jolly Jumper, a Tintin bust and an impressive mock-up of his moon rocket.

The opening exhibitions, on cave paintings, tapestries and manuscript culture are educational rather than entertaining, with Yellow Kid, Buster Brown and Little Nemo bringing us into the twentieth century.

Hergé’s life story from 1907 to 1983 is told, starting with a photo of him at the aforementioned flea market and referencing his work with Zhang Chongren (who helped ensure authenticity in the story of The Blue Lotus) and his meeting with Andy Warhol.

The centre is revelatory; the look-alike detectives in the Tintin stories – who I had always presumed to be related, have different surnames across three languages – Thomson and Thompson in English, Dupond and Dupont in French and Jansen and Janssen in Flemish. 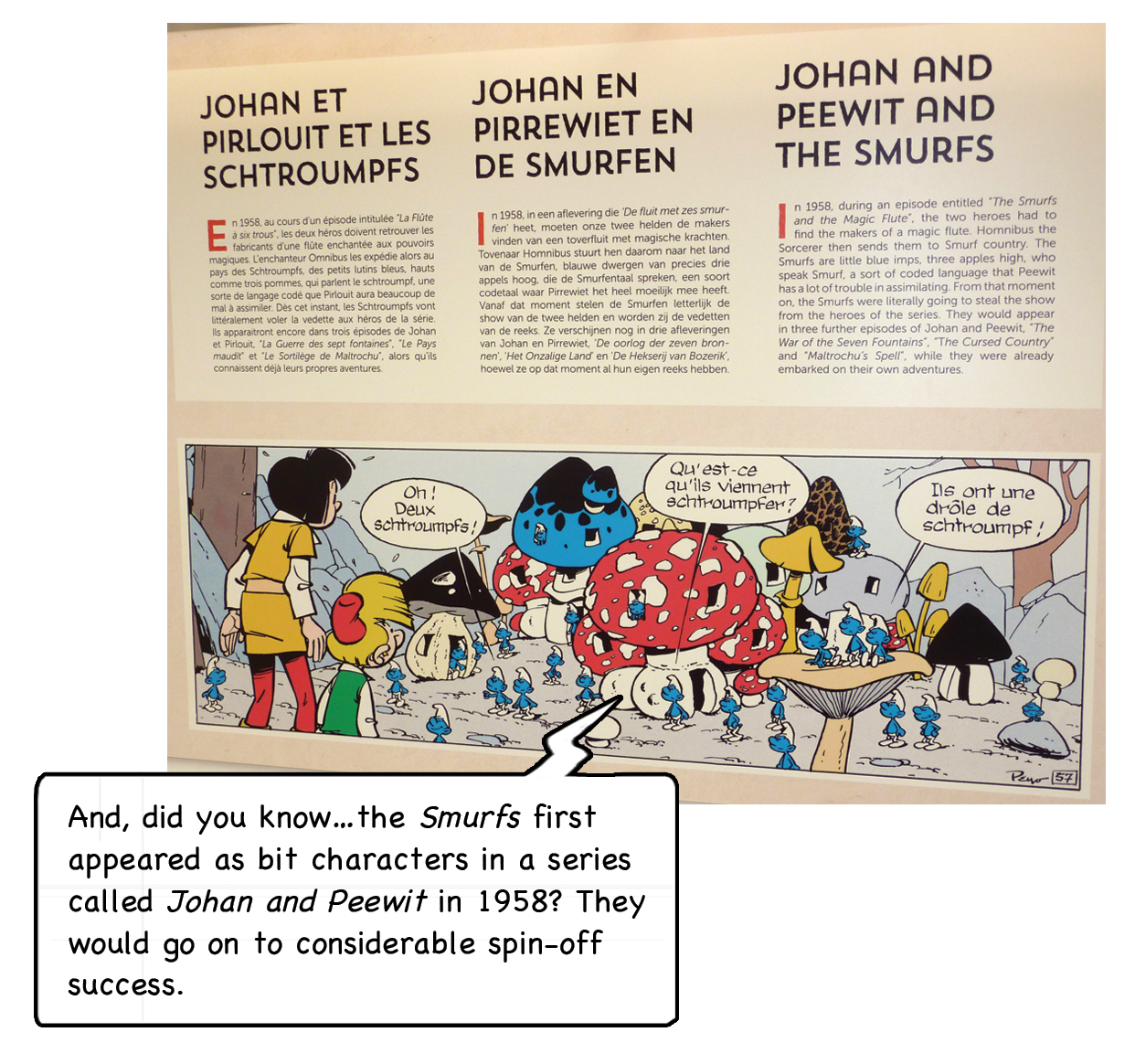 In general, the centre’s displays come with detailed accompanying text, making them of great interest to adults and older children but making them possibly less accessible to younger children.

Time for a drink, and Didier leads us to Le Marais (The Marsh,) a characterful pub where he knows the owner and regulars. Within seconds of arriving a local engages me in conversation about U2 (playing on Spotify,) Madness and Euro 2016. When I let slip I live only 20 miles from Wales he holds his head in mock exasperation. “Three-one! If only we hadn’t lost to Wales we would have won! We could have beaten Portugal and then the final!” I seem to have re-triggered a trauma he has only just overcome, but eventually he removes his head from his hands and we discuss favourite U2 tracks. 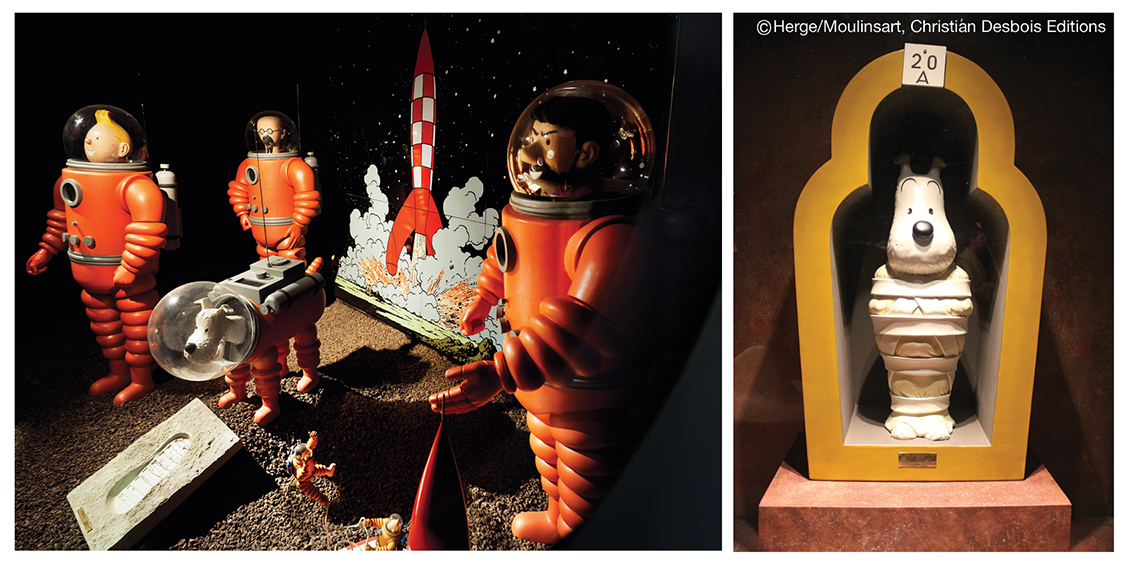 Refreshed, I bid my new buddy goodbye and Didier and I are soon at the Museum of Original Figurines – MOOF. Despite extensive advance research this place is new to me, and I discover a riot of visual stimulation. It’s like descending into the darkness of Bristol Zoo’s aquarium only to find all the exhibits are cartoon figures.

All the Smurfs, Asterix and Tintin protagonists you can possibly imagine – and some you can’t – are here, in numerous sizes and forms – models, storyboard synopses, sketches, chess sets and film set props. Beyond these are, seemingly every Franco-Belgian cartoon character ever created – with every conceivable back story – an amazingly diverse universe of detectives of all ages, strongmen, air hostesses, reporters and 1960s lovers.

My eye is drawn to a ceramic figure of Tintin’s loyal dog Snowy, encased in a sarcophagus (above right). Didier tells me this relates to a mere two frames from Cigars of the Pharaoh, an early 1930s Tintin story, and I imagine the tender yet profound joy felt by someone who read this story decades ago, holding this image dormant and distant in their memory ever since, having that moment spent with book in hands reawakened when finding a 3-D manifestation before them.

The return to one’s childhood is moving at MOOF – this place is magic. Indeed, so great has been the day’s immersion into Belgian comic culture I am having difficulty remembering the remaining murals on my must-see list. 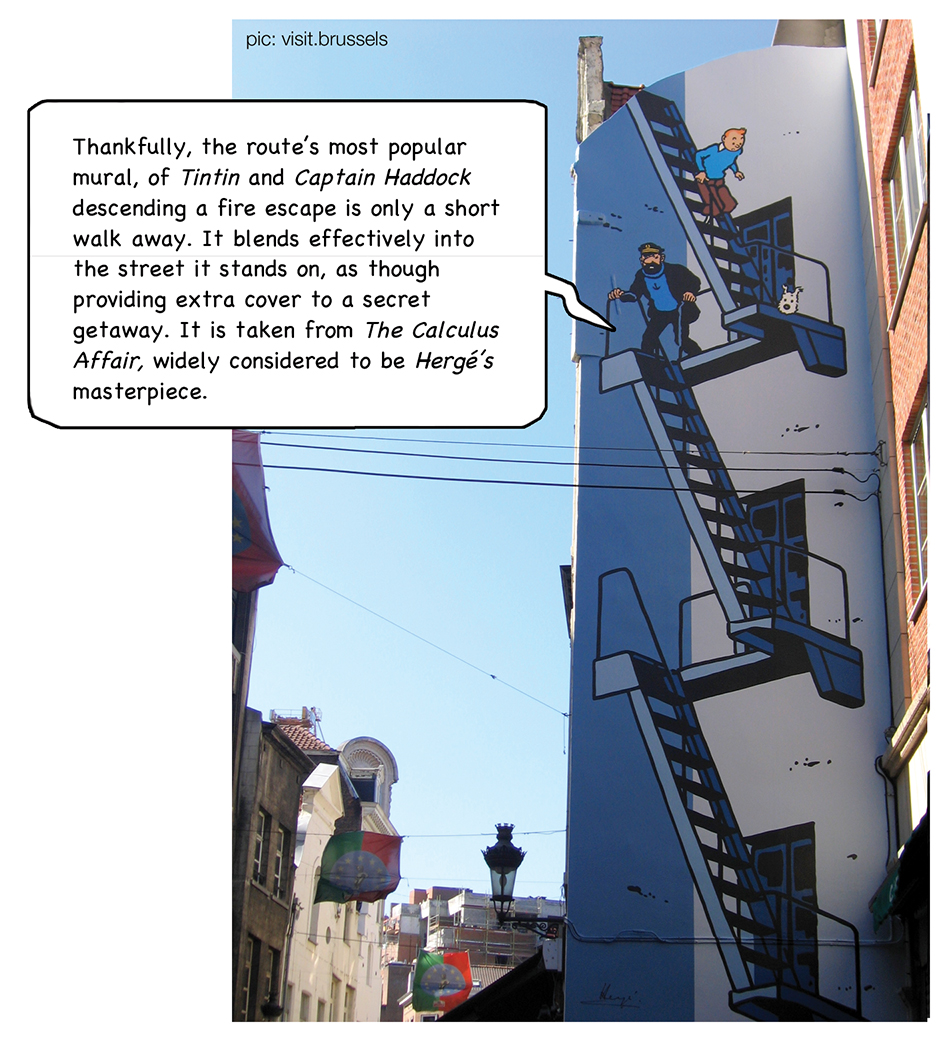 Sauntering through some back-streets, Didier wonders aloud whether a particular gate will be open. Thankfully, it is, and we pass into a children’s playground to encounter a typical scene from Asterix, with the villagers charging off to attack a Roman camp. 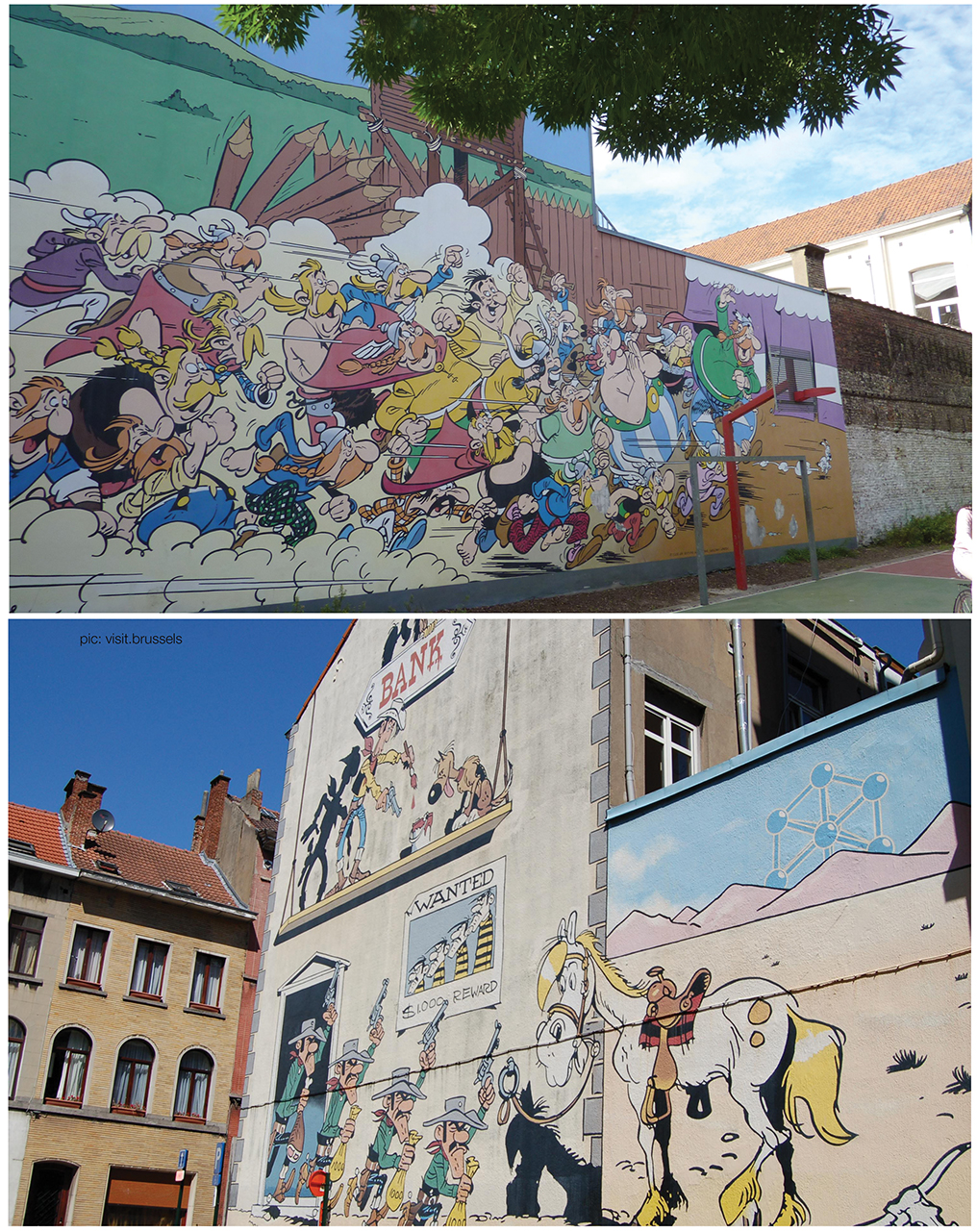 My day is complete when, a few streets later another getaway is underway, with the Daltons (based on the real-life Dalton Gang, also name-checked in Nouveau Western) departing a bank in haste, under the less-than-watchful eye of Lucky Luke.

Didier, my guide of seven hours, has provided a wealth of information enhancing my understanding of the murals and their neighbourhoods, city and country. He has brought to life the artwork and I have connected with Brussels and Belgium in a way I could not have imagined.

Heading home to my hotel, through Brussels’ bricks and mortar, I feel rather like Mr Benn, strolling back along Festive Road after another adventure, gradually leaving behind a fictional world which has held me captive, a world I thoroughly recommend that you visit.

Brussels stages an annual three-day Comic Strip Festival, usually in September, complete with a cartoon character balloon parade and Tintin Rally – a gathering of around 80 vehicles resembling those depicted in Tintin – with prizes for the best! www.comicsfestival.brussels