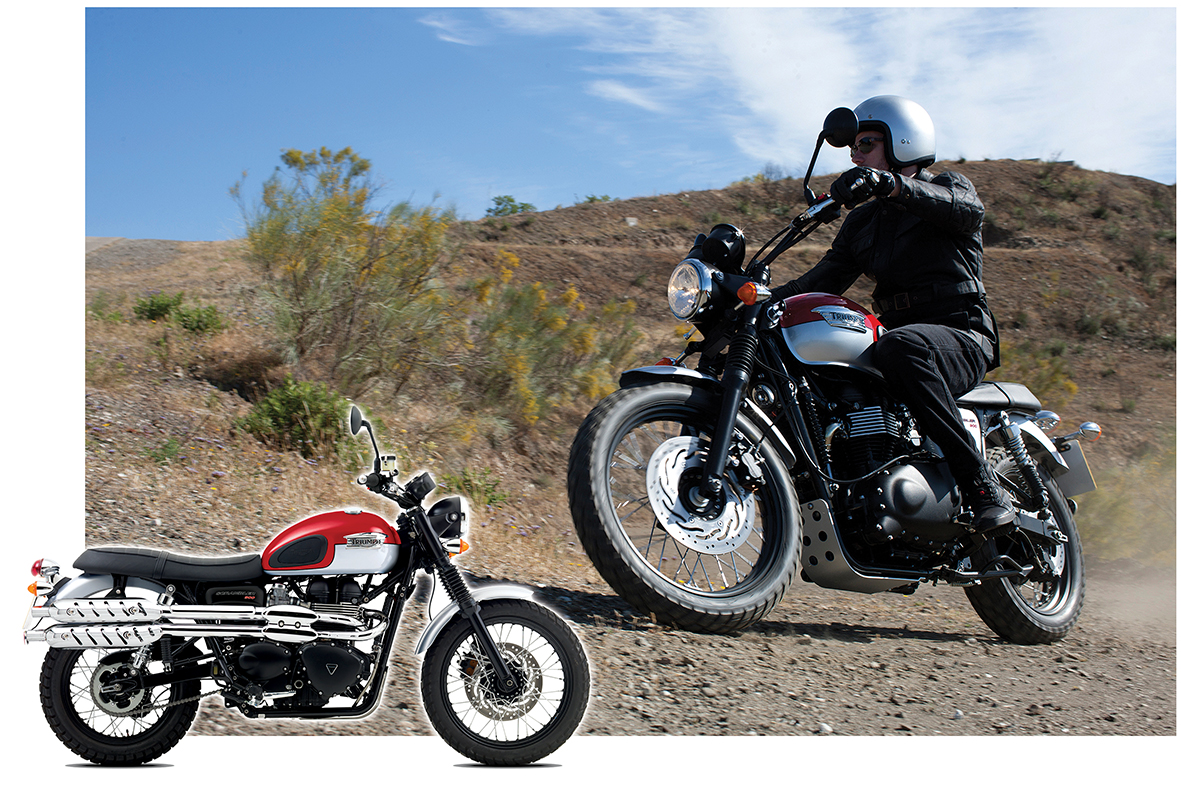 The weather gods are not being kind to me, there’s a yellow, it might even be amber, Met-office warning of heavy rain for this evening and the skies have turned a very moody, ominous grey. Typical! It’s been like this virtually every day since Triumph dropped off their Scrambler on Tuesday. I popped out for a ride last night and after 3 miles or so I turned round and retreated back to the warmth and dry of the garage. Forget any wistful ideas of Rebel without a Cause, by the time I’d wobbled backed through the deluge I looked more like a rat without a raincoat.

The great British summer being what it is (and my lack of any effective wet-weather riding gear notwithstanding) has at least given me time to admire the Scrambler’s looks – usually when I’ve been chamoising it down. It takes its inspiration from the stripped down desert bikes that were based on the twin cylinder Triumphs of the 1960’s. Now, as they were then, the Scrambler gains twin upswept exhausts, short mud-guards front and rear, a skid plate, and knobblier, chunkier tyres. Its looks are un-ashamedly retro, and all the better for it in my opinion, and if you’ve ever stumbled across an old black and white picture of Steve McQueen competing in the 1964 Six Day Trial it won’t take you too long to work out where the idea for this particular ‘bike originally came from. 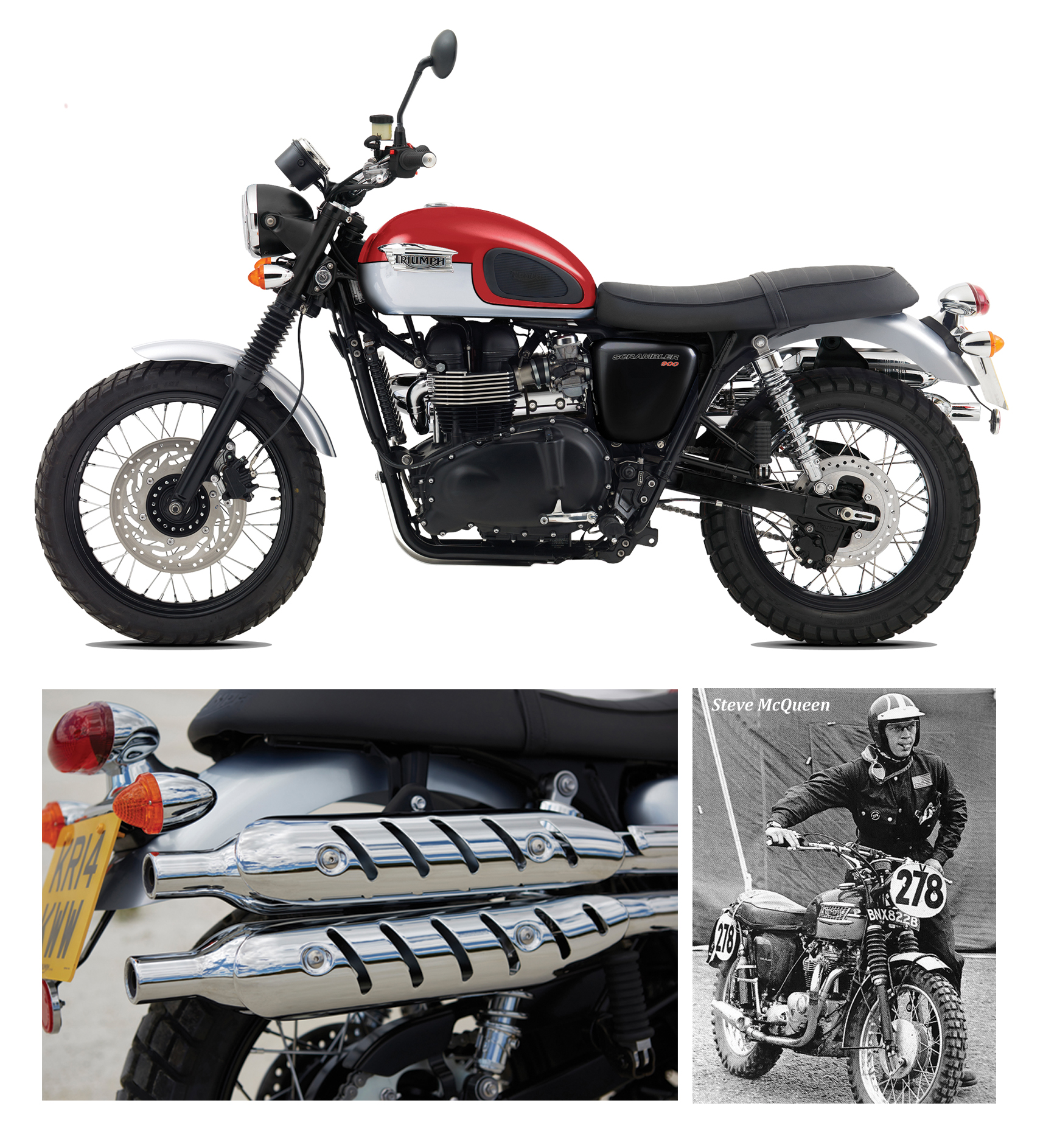 So, then it’s a race-replica? Well yes, and no. Race-replica these days is a term more usually attributed to the fully faired 200bhp+ road-going superbikes like those found following the Isle-of-Man TT. The Scrambler on the other hand, despite its gravel-road going capabilities, is far, far removed from that.

Nevertheless it’s no relic from the past either. From a distance you could be forgiven if you thought the Scrambler still used carburettors, and there’s even what looks like a choke. But the reality is the 865cc eight valve engine uses 21st century fuel-injected technology and that little black knob is actually what’s known as a fast idle. Double-overhead cams have been employed and make for quieter, more efficient and much smoother running. Triumph have also gone to great lengths to make those beautiful curvy exhausts meet all the modern noise requirements. But, by fitting the Scrambler with a crankshaft with a 270 degree firing order they’ve also given it an exhaust note all of its own. Press the little red starter button – there’s no kick-starters these days – and the 58bhp air-cooled twin soon settles into its offbeat bob-bob-bob idle. It sounds beautiful – like a proper British ‘bike.

The riding position is upright, and the wide, flat seat low – handy as I’m barely 5’ 7” with my boots on. My riding skills are a tad rusty too. But it’s here where the Scrambler flatters. There’s enough performance to entertain a more experienced and far less fair-weather rider than me, and yet there’s enough precision and progression in all the controls so as not to intimidate someone looking for their first big-bike. It’s heavy but balanced, and it doesn’t feel cumbersome. The wide, flat handlebars make the Scrambler feel stable and easy to control, while the twin rear shocks, chromed of course, iron out the worst of the bumps. The brakes aren’t grabby either, thankfully, and neither do you feel like you’re going to be blown of the back every time you wind open the throttle. Or at least that’s what I’ve discovered so far. My desperate bid to avoid the showers continues. 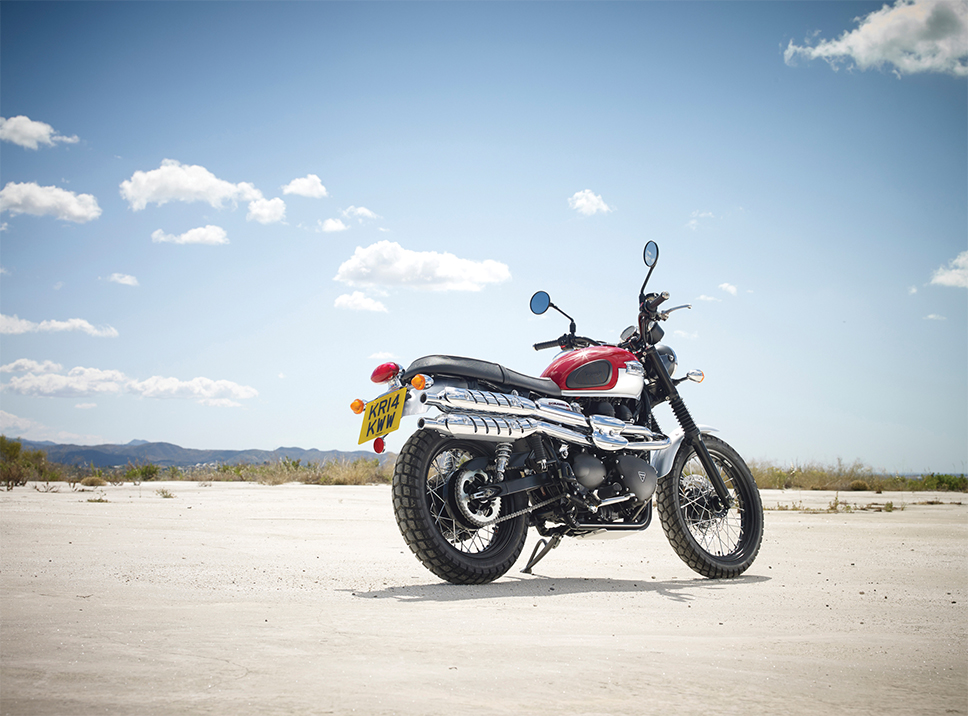 Triumph say they built the Scrambler to “evoke the spirit of freedom and escape, carefree times when all you needed was a ‘bike and somewhere to ride.” I’d say they’ve done a pretty good job of it.

The Scrambler’s the kind of ‘bike you pop down the shops on, take out on a Sunday morning just for the hell of it, or just as easily, ride off into the sunset.

If we get another good sunset before the van turns up next Tuesday and Triumph take it back, I might just try.