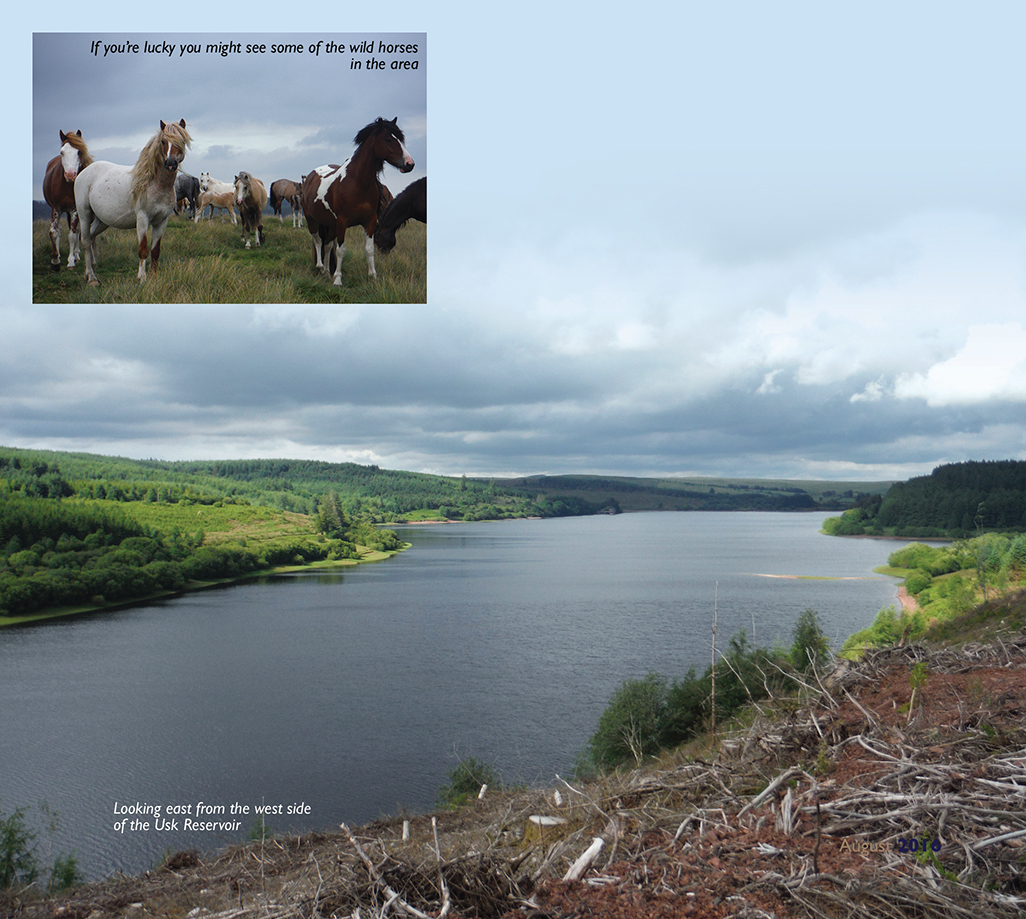 When the hushed chilled air of the Black Mountain is still, you may just hear her – yr Harddwch o Brycheiniog, wailing for her lost love. Legend has it she retreated into the cliffs of Fan Brycheiniog when her true love, the spirit of Fedw Fawr was lost when the land was flooded. From here high in the cliffs her tears spill down onto Waun Lwyd where they flow into the Usk and keep the waters full. It is said that on a strawberry moon she emerges from the rocks and crosses the moor to drink from the spring of Myddfai, whose magical waters help ease her pain.*

Family rides can be tricky; I remember from my own experiences when my boys were young, coaxing them up the hills with promises of things to come, some of which never material-ised but always seeking out points of interest to temporarily occupy their minds. Fortunately this area of the national park has plenty to offer free-range children and, if done in a clockwise direction, this loop has only a few small gradients. 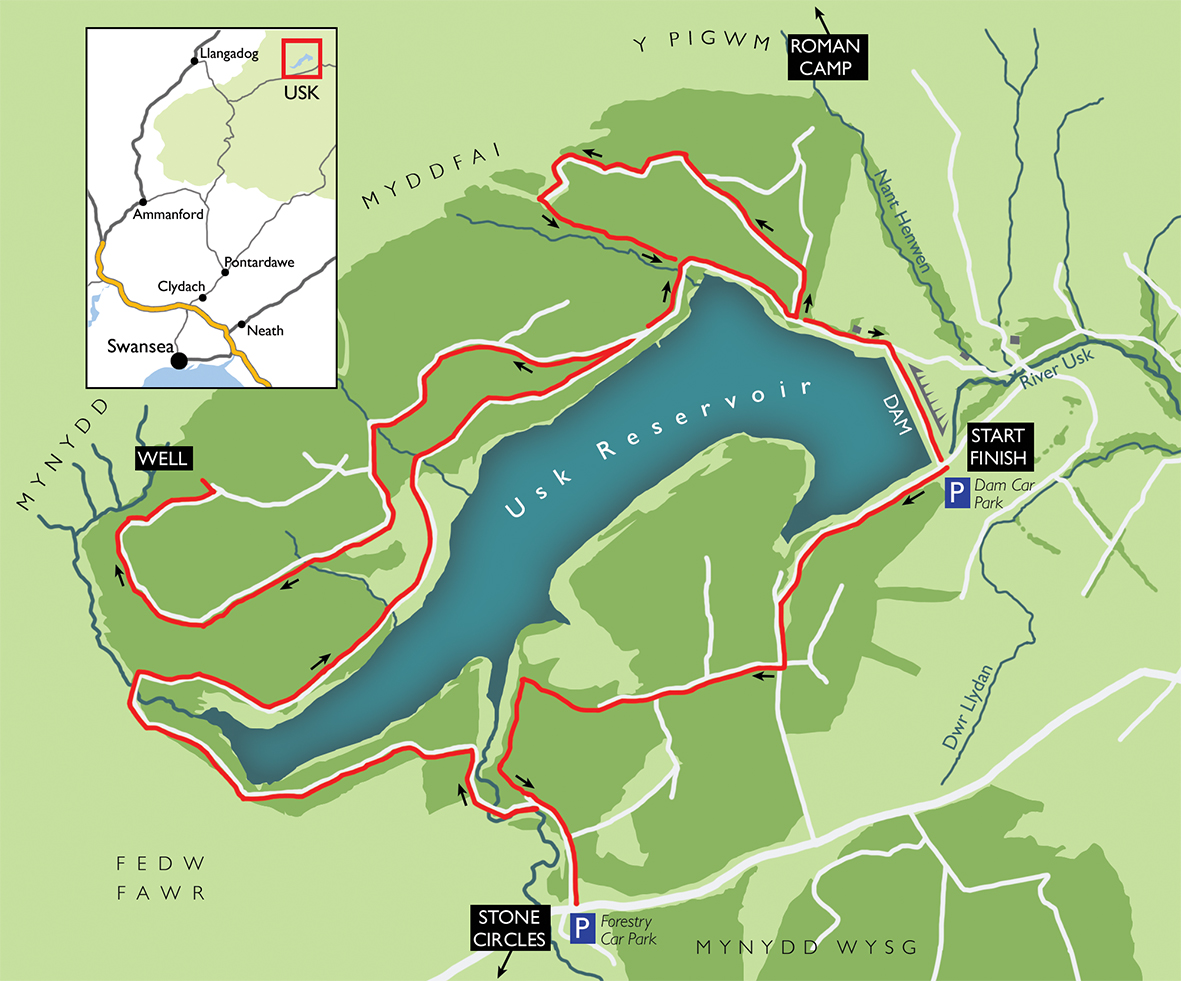 Starting either at the dam or the forestry car park near the noisy cattle grid this way-marked 9km loop circumnavigates the Usk reservoir on good forestry tracks with only a short stretch on tarmac. The dam is possibly the better starting point, not only because it gives you the opportunity to sample the wares of the ice-cream van but also the few small hills there are on this ride will be ridden with fresh legs. The dam, which is predominantly an earth and clay structure, was built in 1955 by Swansea City Council and was the first dam of this type in the UK to have horizontal drainage blankets. These allow the water to flow horizontally through the dam rather than causing its collapse, discharging the water on the downstream side. With memories of failed attempts to dam small streams and create pools to swim in when I was younger, I must admit it does give me cause for concern that some 2,700 million gallons of water are held back by a large pile of mud, which is why I always tend to cycle a little quicker than I probably need to when crossing here! For those of you not troubled by such thoughts, this is a great place to play spot the white sheep with the children as a flock of predominantly black sheep who also seem impervious to such feelings can be seen grazing nonchalantly beneath the dam.

If you choose to start your ride from the dam, then head south west, (upstream) initially on a quiet public road before turning right into the forest. As you head through the forest the climbing is almost done and you enjoy some gentle downhill sections before you come to the second fork where the route takes you right. It is worth taking a short diversion here turning left for a few hundred metres and heading up towards the car park at Mynydd Wysg. This is a great spot to take a break and take in the truly spectacular views of the Carmarthen Fans; also a short distance away there are some stone circles which are certainly worth a visit and for the children this is a great place to play in the stream. Recently there has been a lot of clear felling taking place, yet this somehow seems to add something, as you gaze across what looks like a post-apocalyptic landscape to the distinctly shaped hills that form the north western boundary of the national park. Some years ago some friends and I bivvied out on Waun Lwyd and fuelled with some rather fine ale, we decided to go for a night ride out on the moor where we stumbled across something that stopped us in our tracks. Now I know its all relative, but we hadn’t had that much to drink, at least I don’t think we had; still, a medieval village? In the Black Mountain?? We leant our bikes against the huge boulders and opening another beer sat down amongst the straw houses to ponder the scene. It soon dawned on us that we were on a film set and a lengthy discussion ensued as to how on earth they had managed to move these great rocks across the moor. It was only when my bike fell over that we realised they were made of fibreglass! There is a photo somewhere of my good friend Ambrose displaying super human strength as he runs through a stream carrying what seems an impossible weight on his back. I apologise now if the authenticity of the opening scenes of the film King Arthur are spoilt by mountain bike tracks weaving in and around the village. 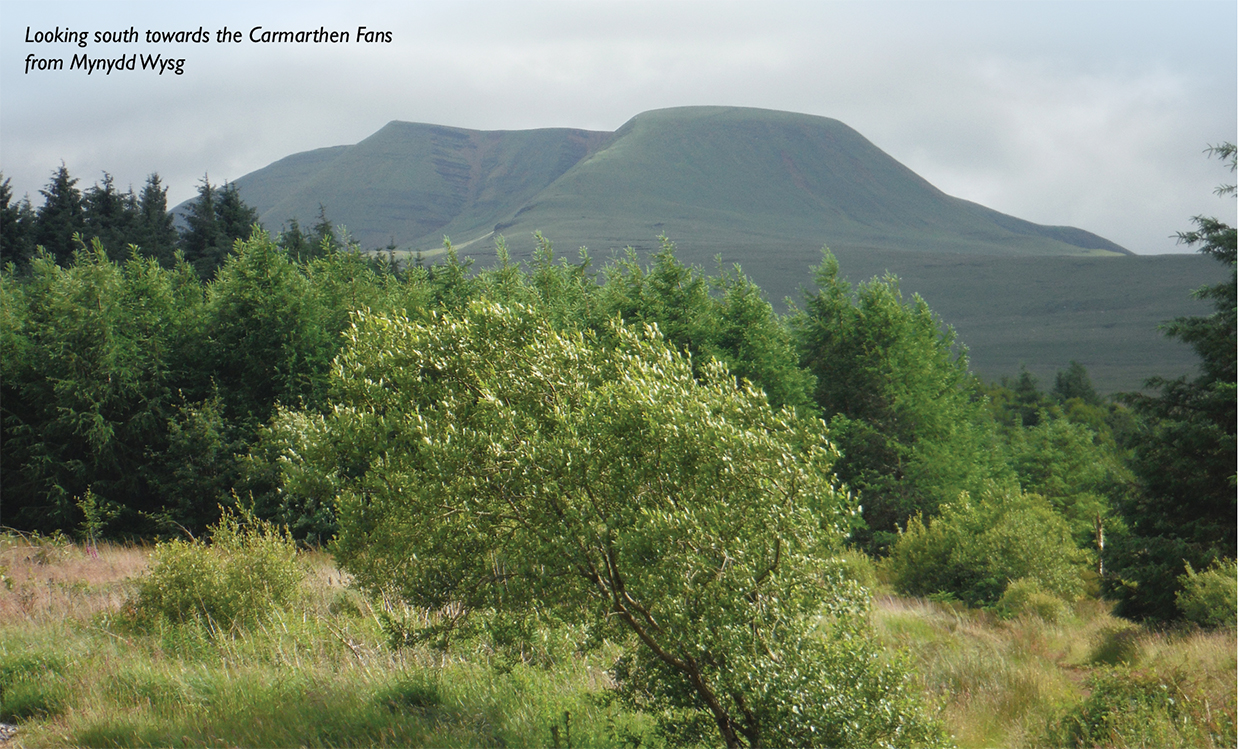 Riding back down into the woods you soon pick up the route again which via a bailey bridge takes you over a small stream. This is the first opportunity for Mums or Dads to show off their mountain biking prowess by ignoring the soft option of the bridge and cycling through the stream. Careful! If you’re not ready for this watery challenge, bide your time as another awaits you very shortly.

Onwards and upwards, though only a little! As you cycle around the western edge of the reservoir in front of you there are some great views of Mynydd Myddfai and on your right Y Pigwm the site of the old Roman Camps. These date back some 2000 years and the ditches and ramparts that used to surround the camp are still visible and certainly worth a visit both from a historical perspective and as a great place for young (and old) to play. They are easily accessible both on foot or bike via the bridleway which heads out from the northern edge of the reservoir.

Once through (or around, depending on how brave you are feeling) the second stream crossing, the last 4 km back to the dam is a flat scenic cycle skirting the edge of the reservoir. In the summer months there is an abundance of wildflowers here, my favourite being the Pineappleweed or to give it its Latin name Matricaria discoidea. This annual plant is not indigenous to the UK but came over from North America and when crushed in the palm of the hand exudes a pineapple aroma. As well as having certain medicinal properties is also edible and can be used to make a chamomile/pineapple tasting tea. 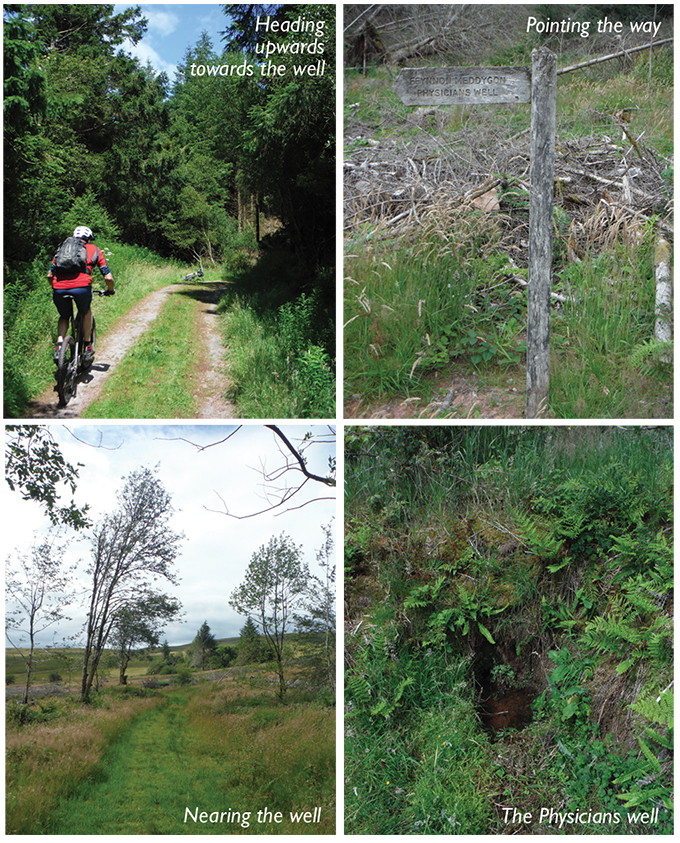 It wasn’t only the Romans (who literally) put this area on the map but also the famous physicians of Myddfai. Allegedly the first of these was borne by the lady of the lake – another Welsh Legend – and they practiced for some 500 years up until the 18th century. They were known for their use of plants native to the area to cure various diseases, but it was their attention to detail in particular the quantities and preparation involved in the treatments which enabled these cures to be used generation after generation. It is said that they used the water from what is known as the Physicians well, which now is just a small spring, the waters of which eventually find their way into the reservoir. The well is easily accessible by taking the first left hand turn you come across on the northern side of the reservoir. This forest road is some 3 km long and involves a climb of 50mts or so and whilst offering some wonderful views of the northern edge of the park it feels a bit of a drag to ride. Is it worth it? Probably not unless you plan to push up onto Mynydd Myddfai and ride across the tops to the camps. 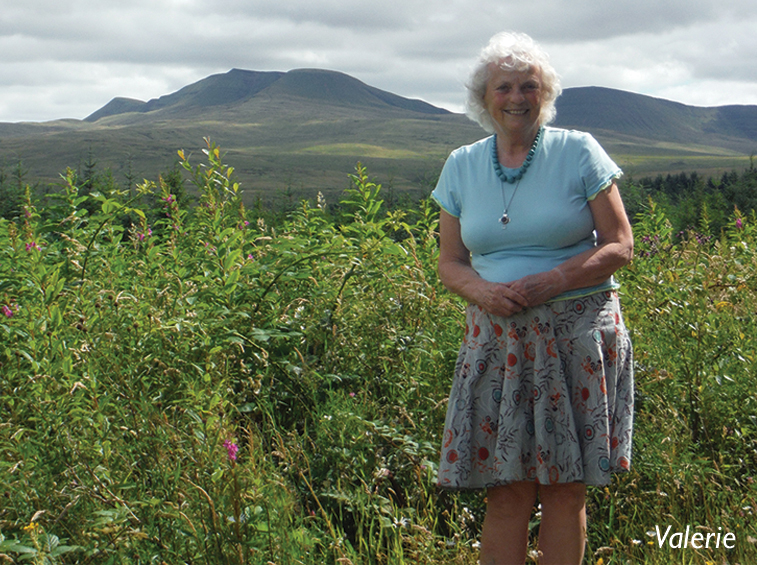 It was here that I met the inspirational Valerie Wood-Gaiger, we walked together to the well and shared stories of our travels and life in general. Valerie has set up a Facebook page called ‘learn with grandma’. This has developed into an international network with 36 groups throughout the world, the idea being to create intergenerational learning using ICT as a bridge between generations, a wonderful idea!

An alternative short excursion to the well is to take the second forestry road, again on the north side of the reservoir which turns left off the tarmac and heads out towards the Pigwm. Once on this track turn left again and follow it uphill until you come to the obvious turning area, here on your left is a track which takes you back down to the reservoir. Grassy at first it soon turns into a slippery muddy path which is great fun to ride. Throw caution to the wind and try to stay upright as your bike does its best to unseat you as it slips and slides its way down the path before ejecting you out onto the track, where you turn left and head back towards the dam. 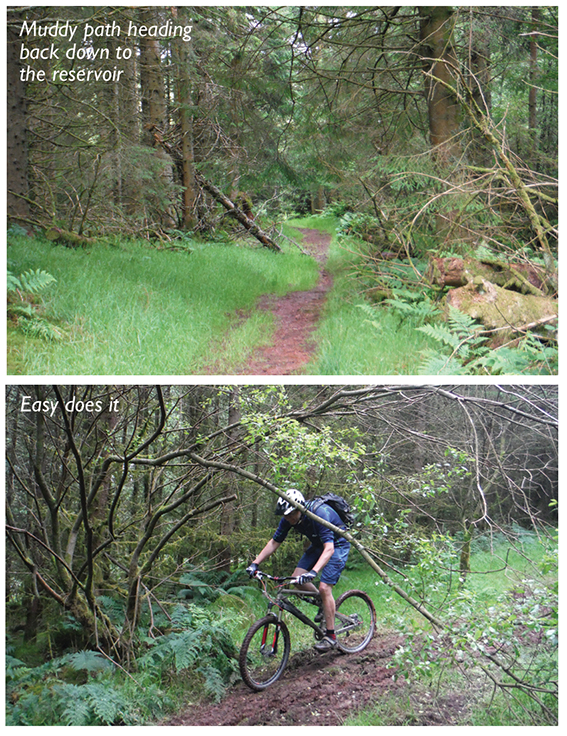 I’m surprised this area of the national park doesn’t get more visitors, whether that’s because of the lack of amenities or the distance needed to travel here I’m not sure, but steeped in such history and with possibly some of the best scenery in South Wales, it’s certainly worth a day out.

* A Welsh legend according to Kim Jones