Only a hardened bug-lover is likely to be able to appreciate leaf beetles during their larval stage, when they are rather unfortunate looking, blobby eating machines which often carry their own excrement on their backs to disguise themselves. At this stage it is hard to believe that they are about to undergo an astonishing transformation which will turn them into some of the most colourful, beautiful insects in Britain with immense public appeal. 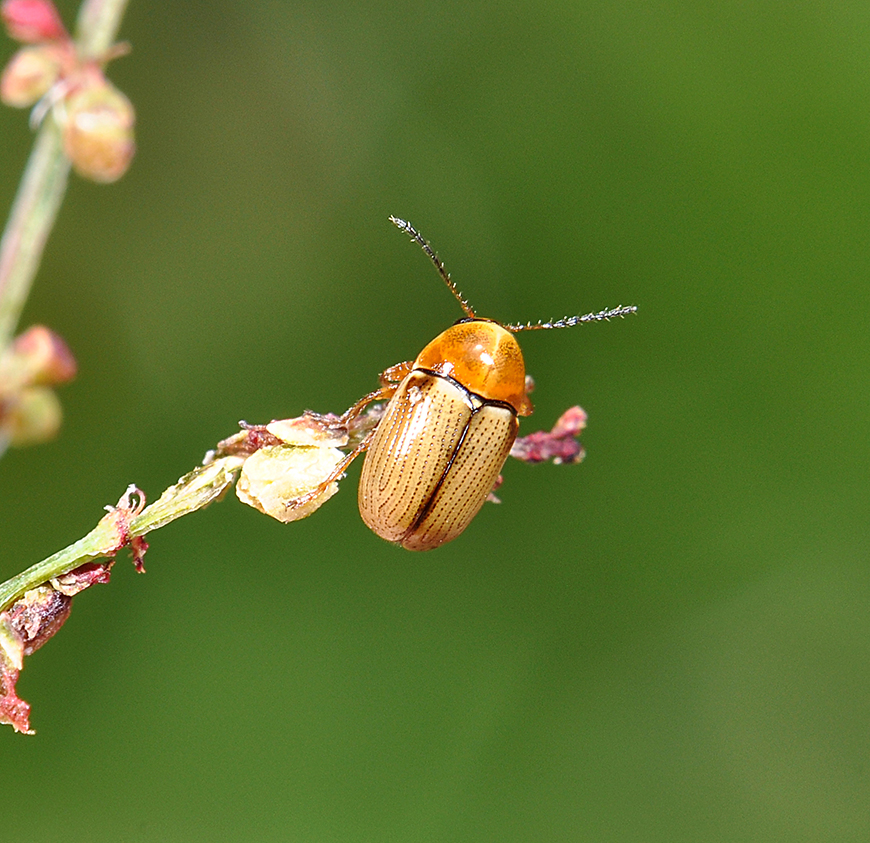 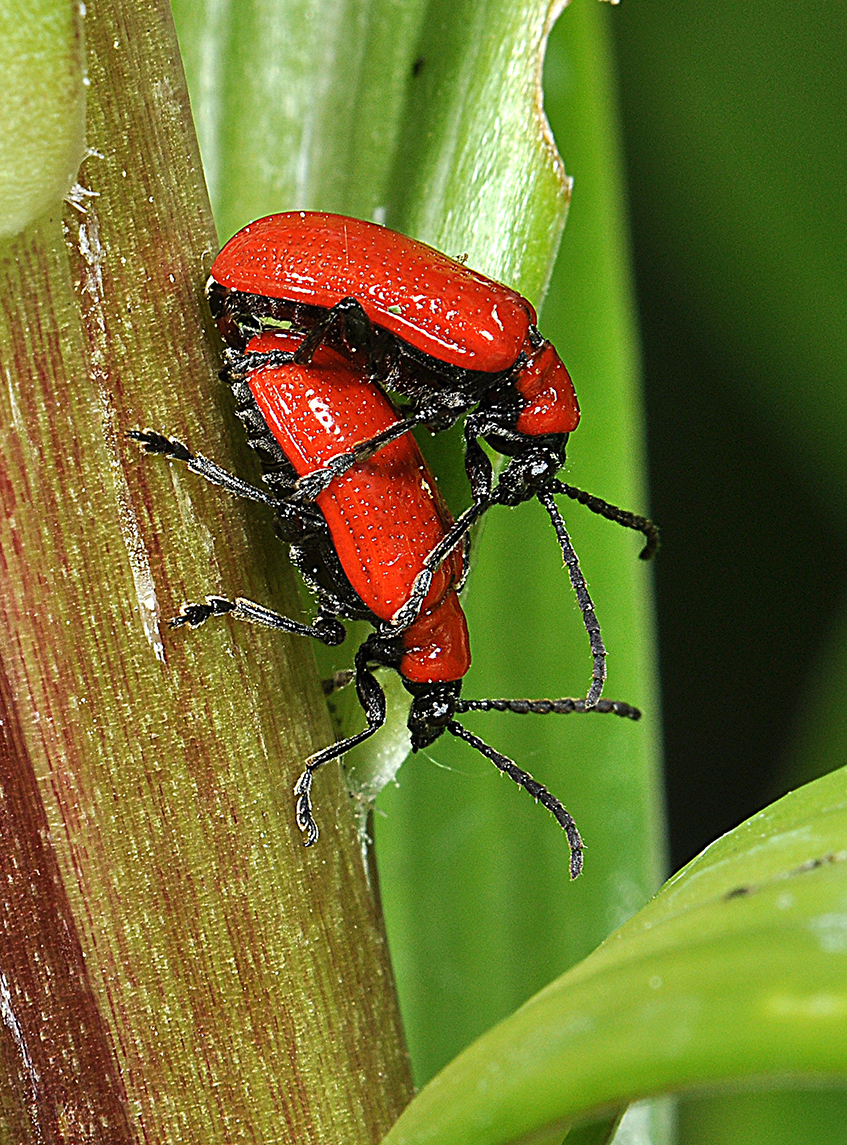 There are 273 species of leaf beetles in Britain virtually all of which – true to their name – feed on leaves. In addition to their often brilliant colours, many have interesting adaptations, but despite all of this they frequently go unnoticed because many species are small (some, such as the minuscule Cryptocephalus fulvus (photo 1), never reach more than 3mm in length) and, once they have found a patch of vegetation that is to their liking, leaf beetles tend to stay in close proximity to their foodplants. A few species, for example the Lily Beetle (Liliocerus lilii) (photo 2), however, can become impossible to overlook when their penchant for leaves finds its expression on ornamental or agricultural vegetation. 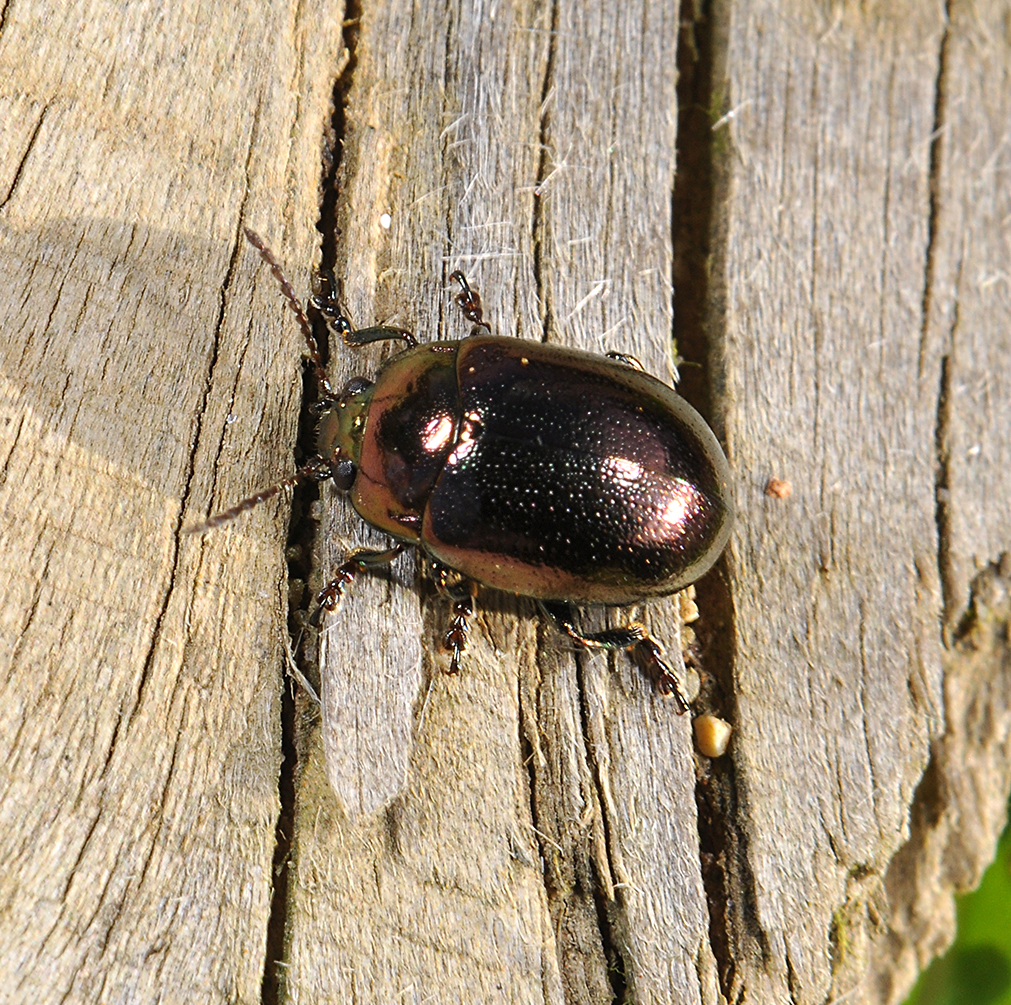 The leaf beetles with the most typical body shape belong to the genus Chysolina. They are medium sized, brightly coloured beetles, many of which possess a beautiful metallic sheen all over their bodies like Chrysolina brunsvicensis (photo 3) and Chrysolina herbacea (photo 4). 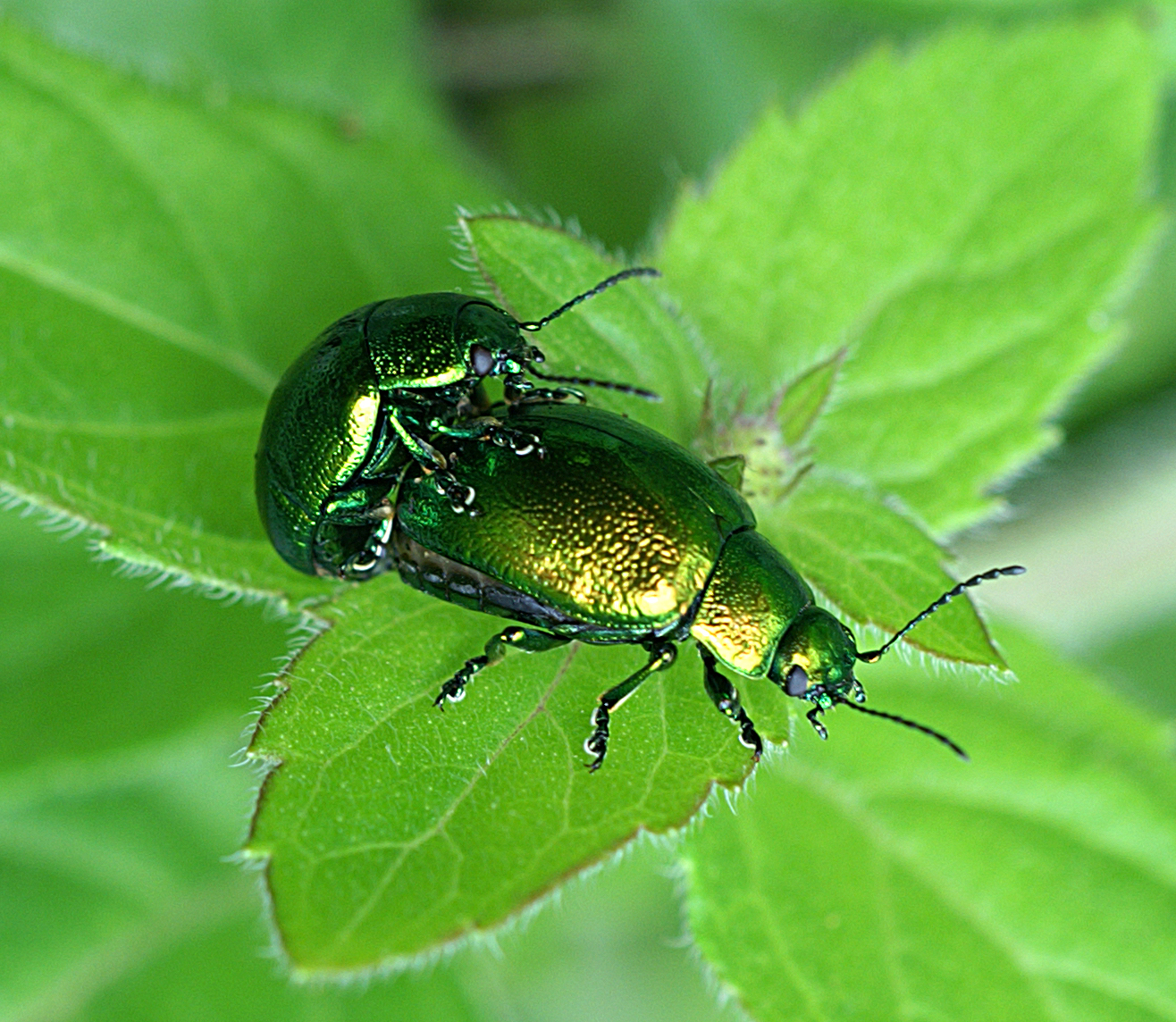 Others, for example Chrysolina polita (photo 5) are colourful, but with only some metallic body parts. Many Chrysolina species are quite particular as to their food plants, such as the brilliant metallic blue Chrysolina sturmi (photo 6) which prefers ground ivy (Glechoma hederacea), and Chrysolina hyperici, whose dumpy larvae (photo 7) and glossy adults (photo 8) live on St. John’s wort (Hypericum spp.). 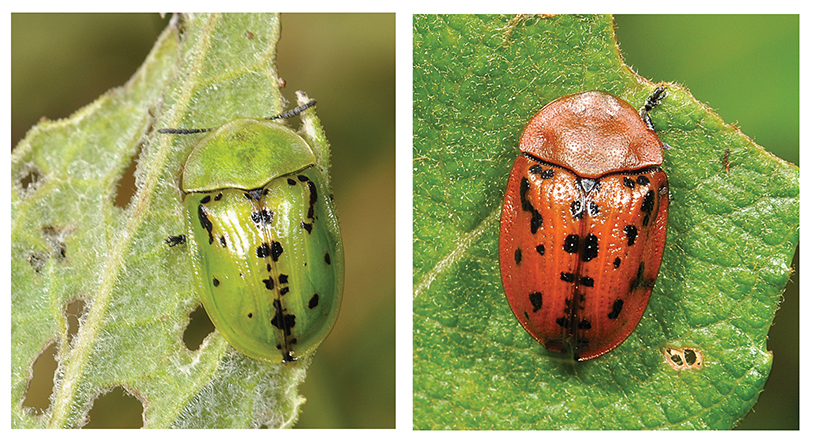 Leaf beetles of the genus Cassida, on the other hand, have a very unusual body shape with an enlarged thoracic shield and wing cases which hide most of their head and legs. As a result of this unique appearance, they are referred to as tortoise beetles. Many British tortoise beetles are green with varying amounts of patterning. The most unusual one is Cassida murraea, whose bright green background colour which it possesses as a young adult (photo 9), changes to bright red as it becomes ready to breed (photo 10).

In order to disguise themselves, tortoise beetle larvae carry their shed skins and elaborately shaped excrement over their backs like an umbrella, supported by special spines on their hind end (photo 11). 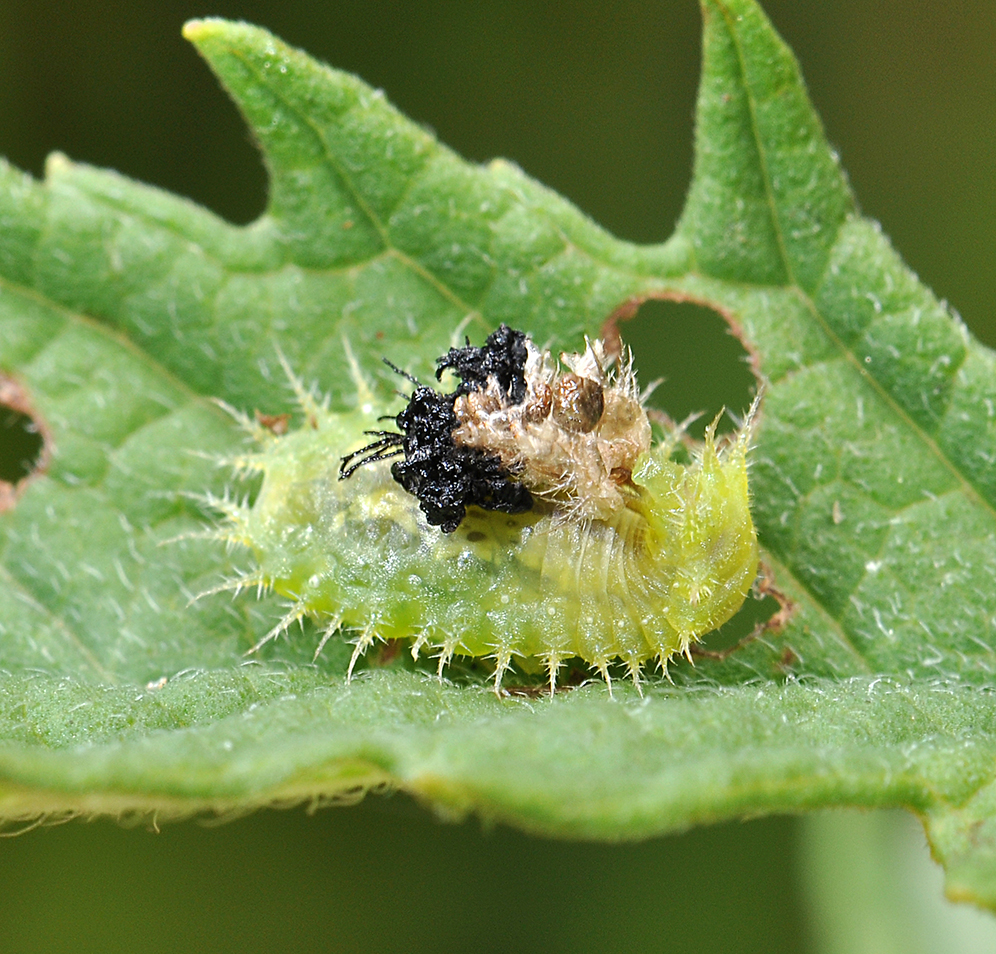 Other leaf beetle larvae, including the larvae of the Lily Beetle mentioned earlier, camouflage themselves rather less neatly, smearing thick layers of gloopy excrement all over their bodies. This strategy is extraordinarily successful not only as a way of concealment but also as a second line of defence once spotted, rendering the larvae exceedingly unattractive to any predators – or gardeners – who may be harbouring intentions of picking them off their foodplants. 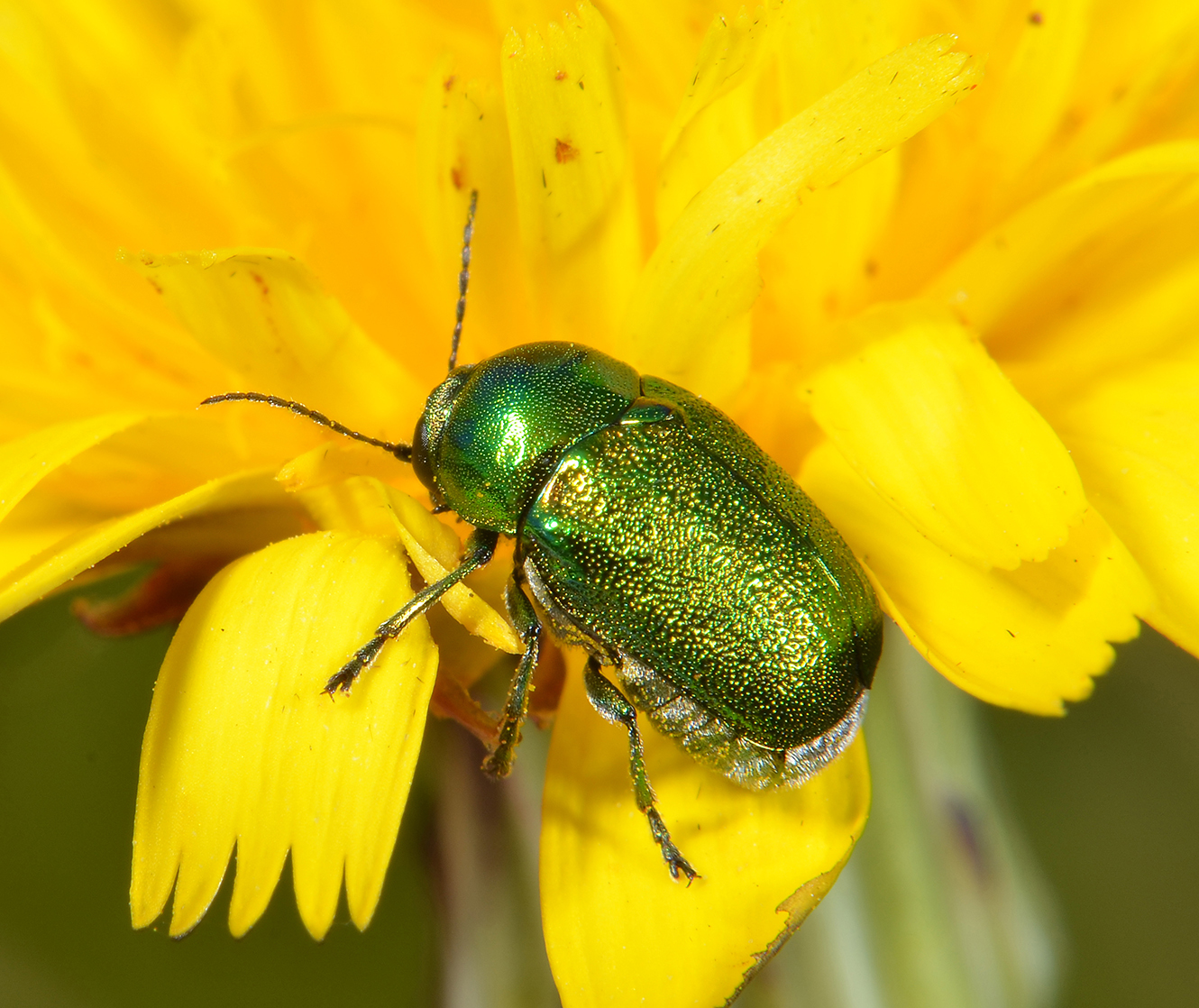 Perhaps the most elaborate use of faeces is exhibited by the leaf beetles of the genus Cryptocephalus, including Cryptocephalus fulvus shown previously in photo 1 and the somewhat larger Crytocephalus aureolus (photo 12), which spend their egg, larval and pupal stages in neatly fashioned, firm, portable pots constructed from their excrement. As a result, they are often referred to as ‘pot beetles’. Their pots provide them with physical protection, shelter from the elements as well as helping them to go unnoticed during their development, which is spent among leaf litter. Female pot beetles start the process by shaping a smooth covering of faeces around each egg when it is laid. When the larva hatches, its chews a hole into the covering through which its head and legs can protrude, allowing for feeding and movement. It then enlarges the initial pot as it grows. When the larva is ready to pupate it places a lid on its pot where it remains until it is ready to emerge as an adult. 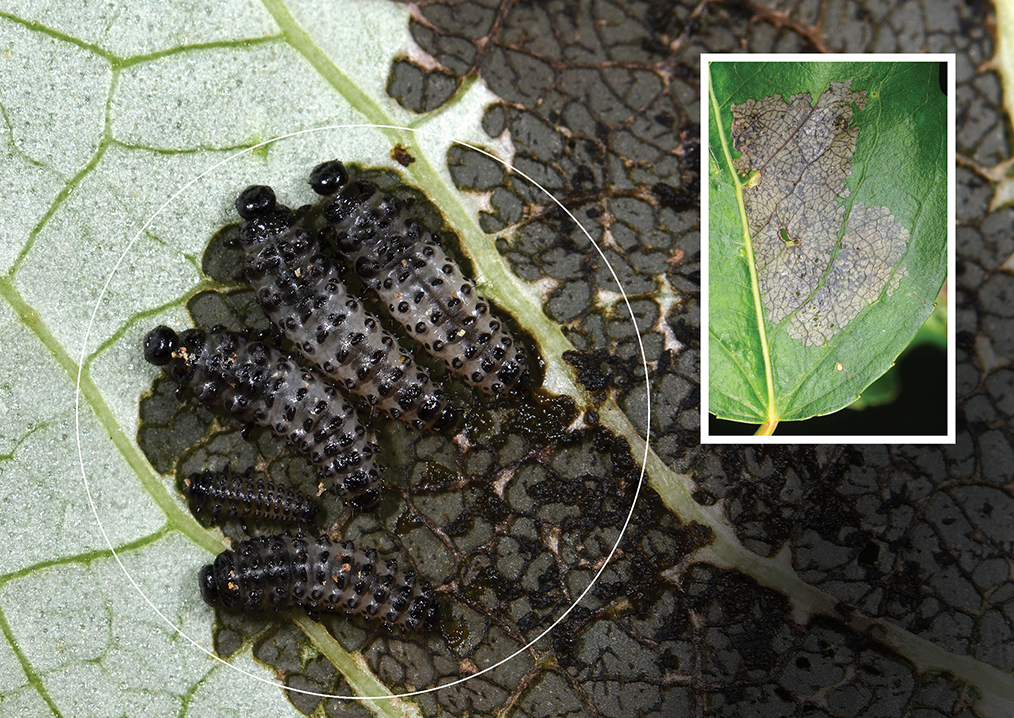 Not all leaf beetle larvae use faeces for camouflage. Larvae of some species including the Red Poplar Leaf Beetle (Chrysomela populi) (photo 13), stay out of sight by carefully eating away the underside of their chosen leaf only, leaving the surface intact. Photo 14 shows the upper surface of the leaf harbouring the larvae in photo 13.

During their larval period, Red Poplar Leaf Beetle larvae produce chemicals which deter predators, and by the time they reach adulthood they possess these in sufficient quantities to take on a warning colouration, no longer even attempting to disguise themselves but instead relying solely on their chemical armoury to keep them safe (photo 15). 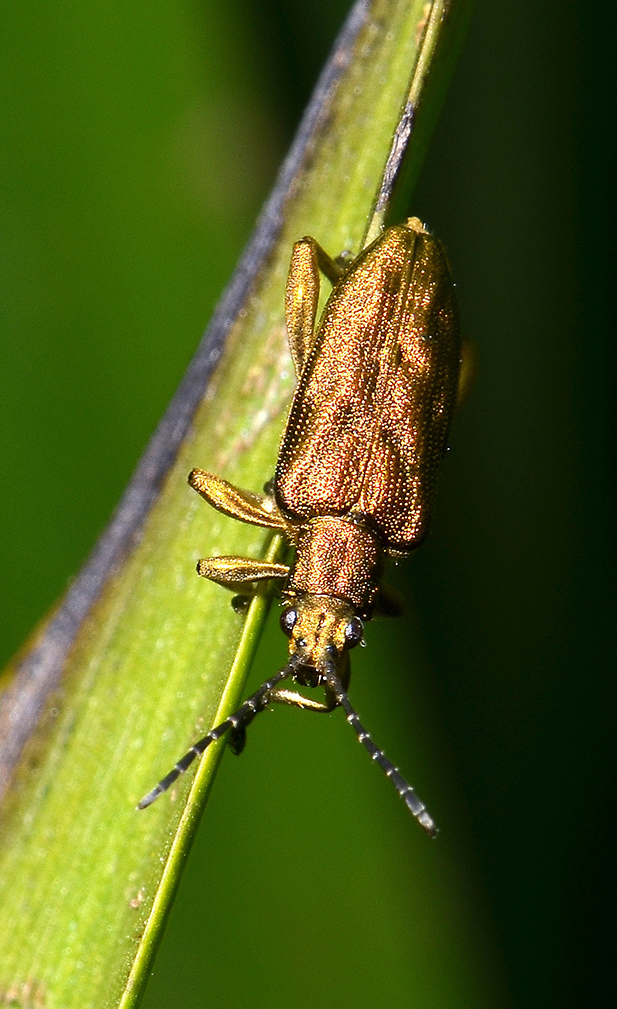 Another less colourful but probably more familiar leaf beetle which also utilizes chemical defences is the large, bluish-black Bloody-nosed Beetle (Timarchia tenebricosa) (photo 16). It is usually encountered as it walks somewhat ponderously along paths, beside hedgerows or through short grass, particularly on summer evenings on the Gower cliffs. It bears a superficial resemblance to certain dung beetles which occur in similar habitats, but on closer inspection its large feet, which almost make it look like it is wearing slippers, are a giveaway. Its larvae feed on several species of bedstraws. When a Bloody-nosed Beetle feels threatened, and in particular when it detects a predator’s breath on its body, it purposely causes itself to bleed by breaking thin membranes inside its mouth allowing several drops of its red haemolymph to escape from its mouth, alerting the attacker to the fact that it possesses distasteful chemicals in its body fluids.

Perhaps the most elegant of the leaf beetles sporting some of the most impressive metallic colours are found near water and belong to the genera Donacia and Plateumaris. In the genus Donacia, the larvae are fully aquatic, feeding on the roots or other submerged parts of their host plant. In order to breathe under water, they tap into their foodplant’s air conducting tissues by means of special tubes on their hind end, effectively ‘plumbing’ themselves into the plant’s air supply. They develop slowly and pupate in air-filled cocoons underwater. It can take up to three years before they emerge from the water as shimmering adults. Two of the most beautiful species are Donacia bicolora (photo 17) and Donacia vulgaris (photo 18). 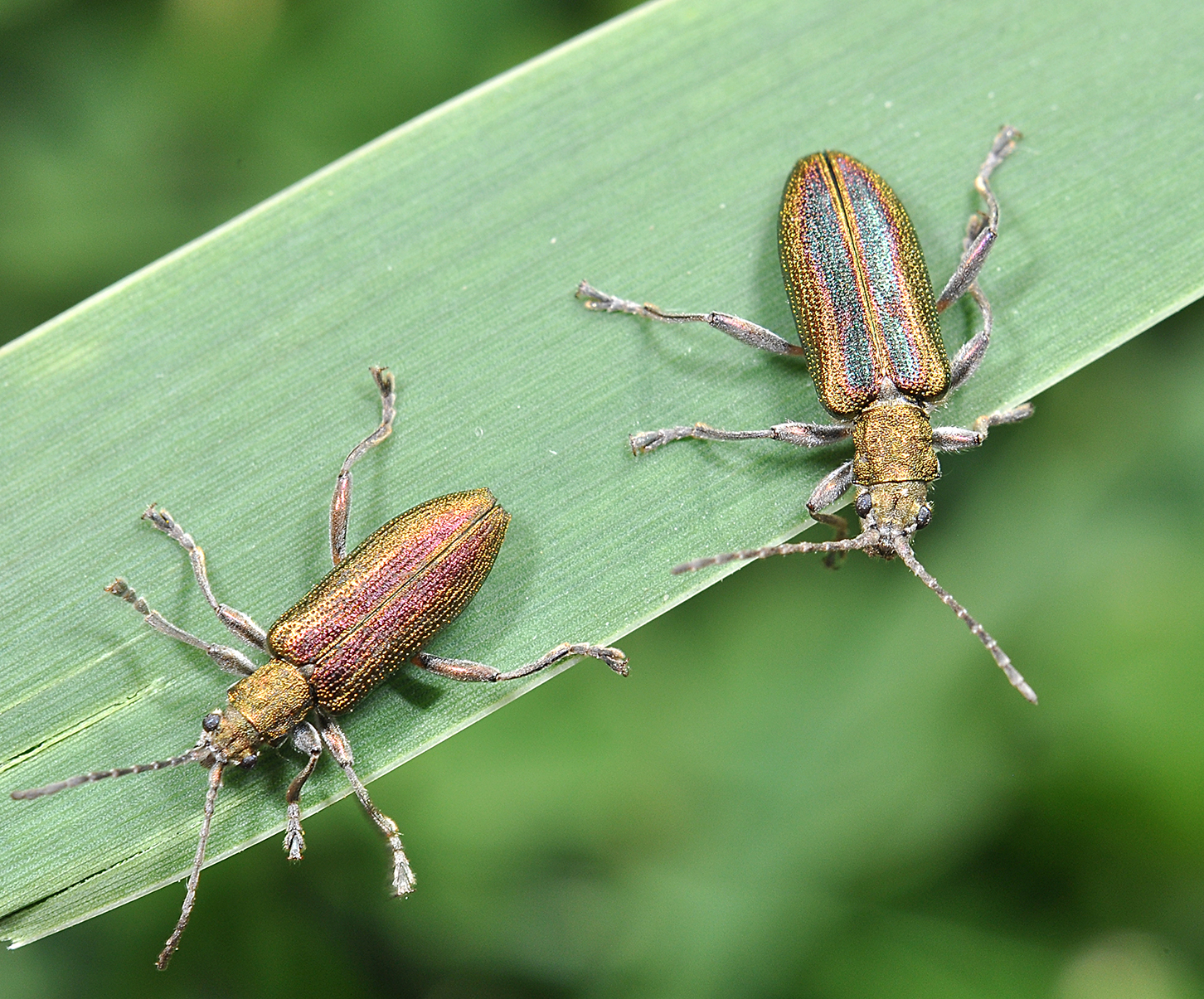 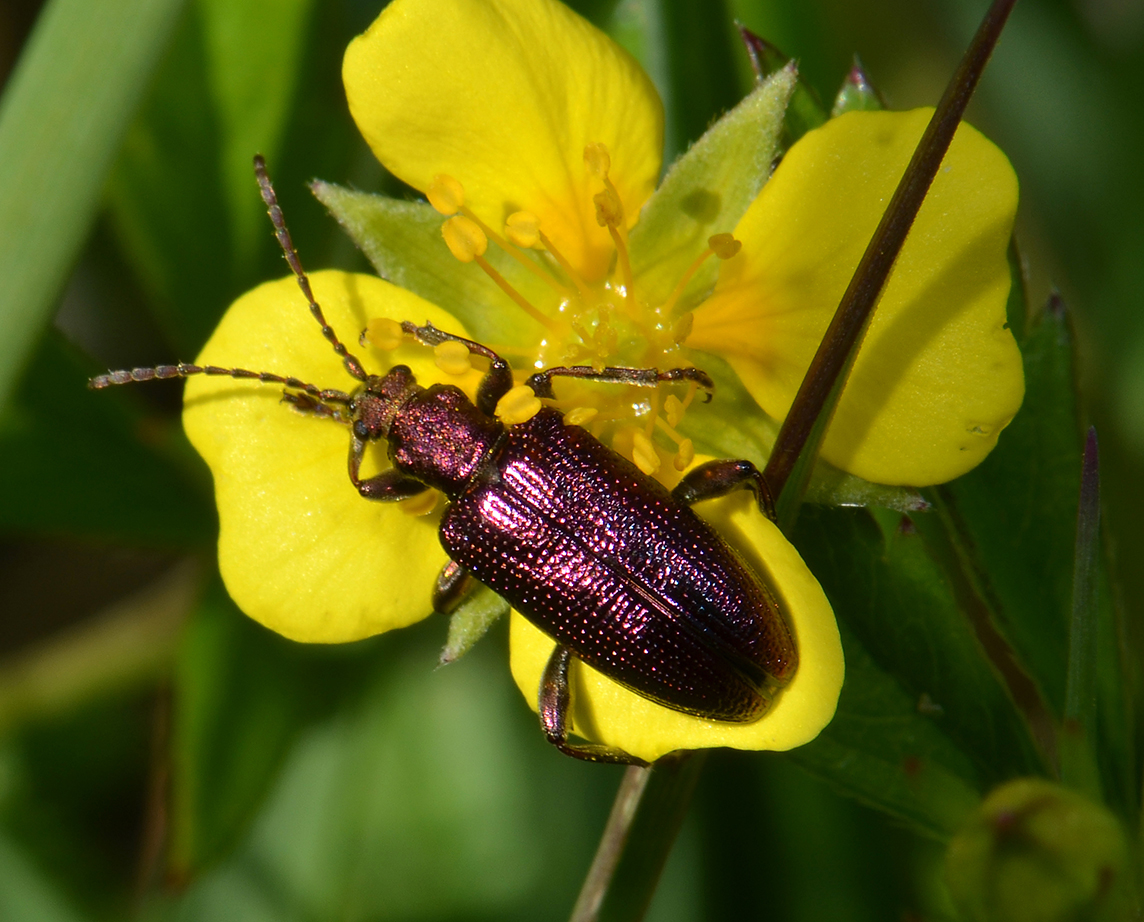 The superficially very similar Plateumaris, which have slightly thicker legs than Donacia, are no less attractive. The stunning Plateumaris sericea (photo 19) is exceptional in that it occurs in a wide variety of metallic colours ranging from almost black and blue through to red and bronze (photo 20). They are definitely worth looking for on reeds and other marginal plants around ponds and lakes during the summer, especially around the month of June.

But it is not only in June that leaf beetles can be found, one species or other is out and about as an adult during every month of the year (although obviously they hide away during the worst of the winter weather) so that keeping an eye out for one of the little jewels is always worthwhile whatever the season. 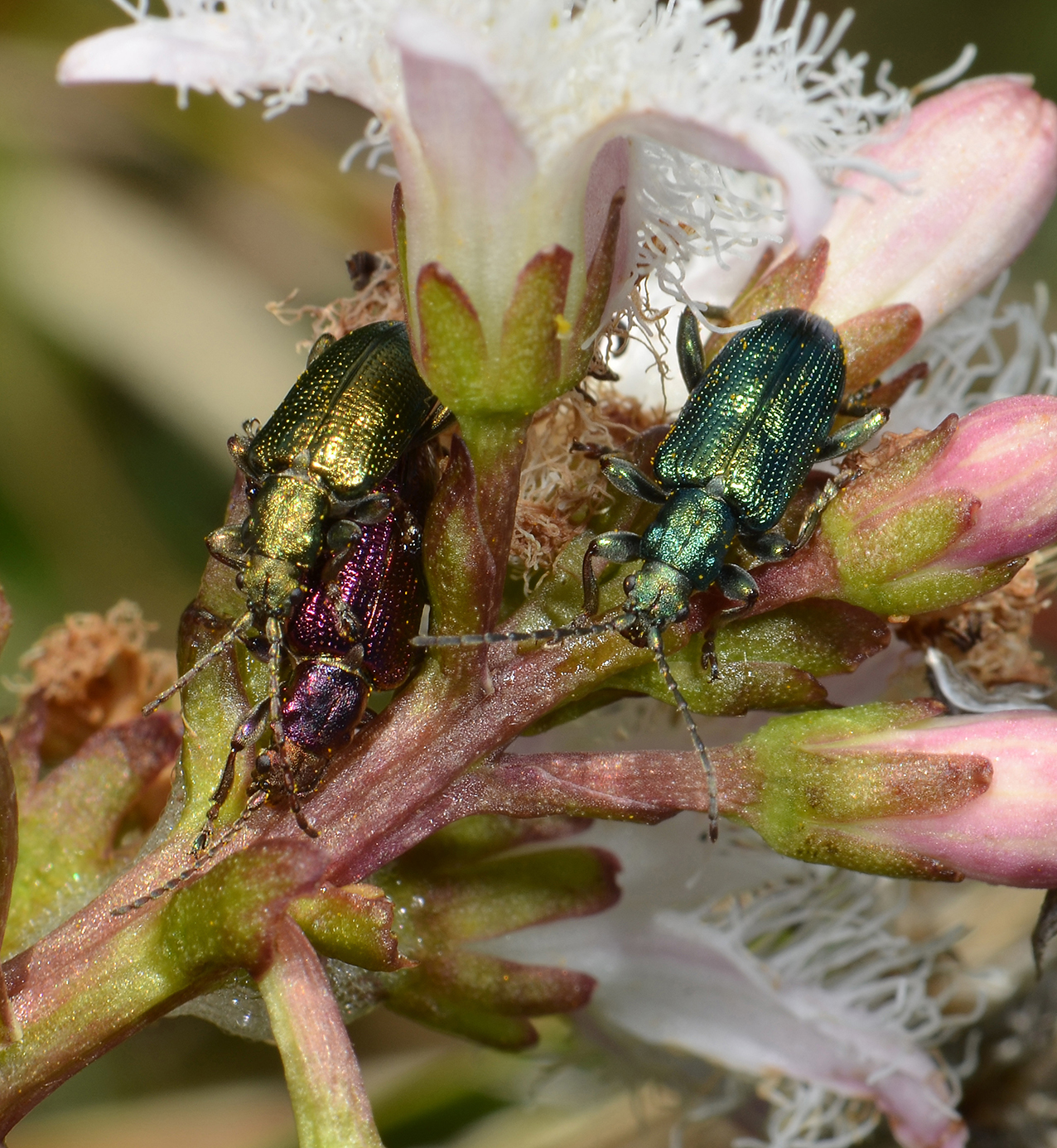